Portrait of a forest on the climate edge in northeastern Minnesota: A photo essay Photo: Conifers once blanketed this swath of Superior National Forest, but leafy deciduous trees are increasingly moving in. The aspen, paper birch, and red maple whose bare branches dominate this winter scene proliferated after a 1999 thunderstorm with powerful winds, called a derecho, flattened nearly half a million acres in the region and fire spread through the area. Photo: Benjamin Olson

Around the world, climate change is reshaping habitats already at their limits. In northeastern Minnesota, near the Canadian border, lies a boreal biome at the southern edge of its climate range. This swath of mixed coniferous forest now transitions to temperate forest to the south in the state, and drier woodland and prairie to the west. Warmer winters, longer and hotter summers, and more variable precipitation ranges are currently transforming this boreal zone, and these shifts have profound implications for vegetation and wildlife of the region.

Benjamin Olson began photographing this ecosystem in 2008 at age 19, enabling him to notice and document these slow shifts. “The changes in the wildlife, landscape, and weather I’ve seen are significant,” he says. “What keeps me going when it becomes too much is this: We get to watch major ecological evolution within our lifetime. While this is depressing in some aspects, I find it utterly fascinating.”

Consider the Boundary Waters Canoe Area Wilderness, the most visited wilderness in the nation, and the surrounding Superior National Forest. Boreal conifers have long thrived there. But over the next century, if climate change continues unabated, models predict the ecosystem could cede some or all ground to temperate forest or even savannah, says Lee Frelich, director of the University of Minnesota’s Center for Forest Ecology. Today, leafy deciduous trees, including temperate forest species like red maples, are increasingly taking root after blowdowns, wildfires, and other disturbances. Red maples are relatively small in number now, but they are a noticeable growing presence to experts who are deeply familiar with these places.

Climate-sensitive birds, such as Spruce Grouse, which exclusively forage short conifer needles in winter and form shelters by diving under snow to stay warm and hide from predators, and Boreal Chickadee, one of the few year-round boreal songbirds, are among the species at risk of vanishing from the state. 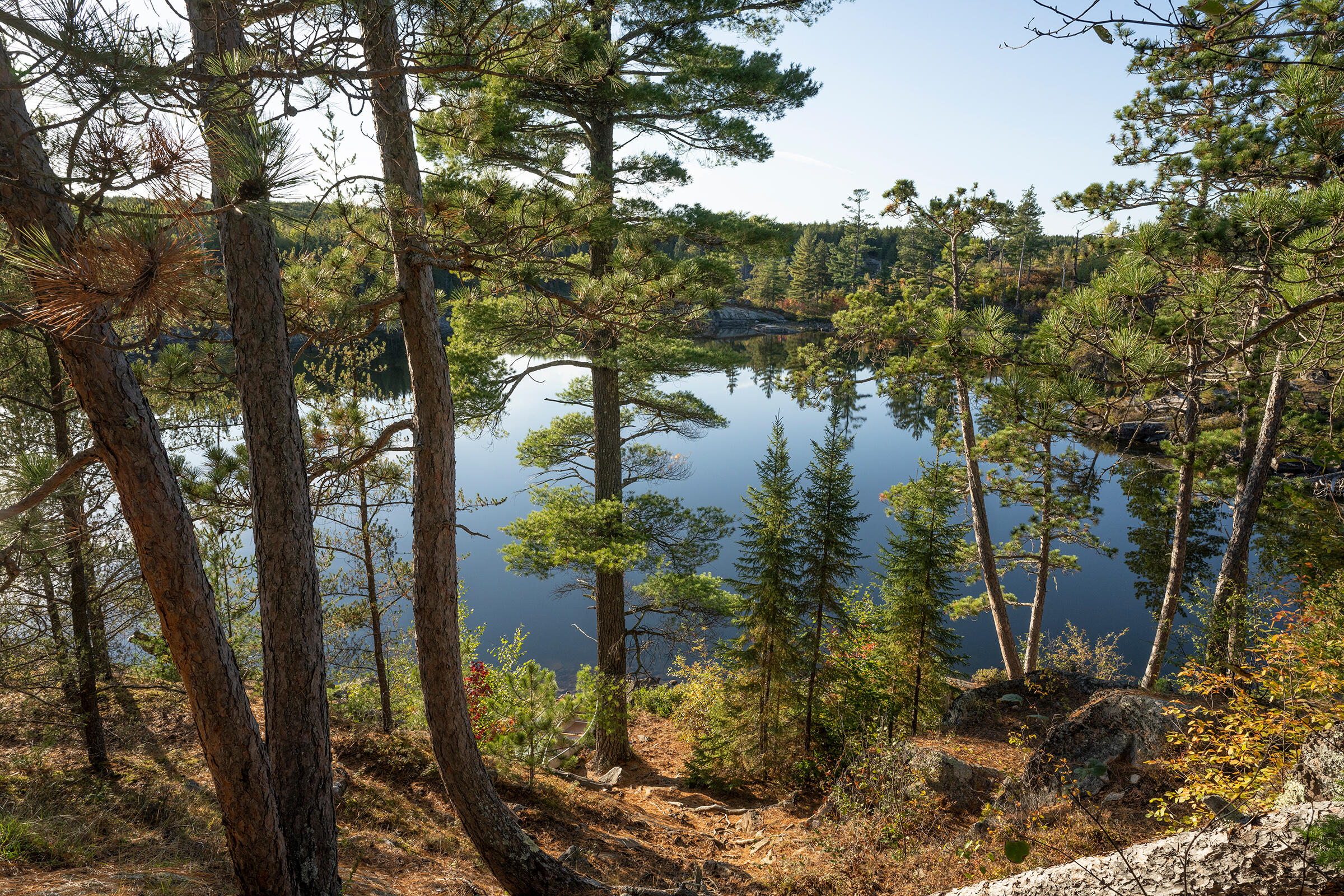 “Spruce Grouse are a species that really rely on conifer forests. In Minnesota, we are at the edge of the boreal region, and we’re expecting that to shift north with climate change,” says Charlotte Roy, a research scientist at the Minnesota Department of Natural Resources who is undertaking a comprehensive study of the game birds’ populations and habitat needs in the state. “At this stage, we’re really trying to wrap our head around: What does this species need, and how might that be affected by a variety of different factors?” Not only is the grouse’s habitat shifting north, she says, but warmer winters lead to snow that melts and refreezes. This creates icy layers that can make it harder and more dangerous for grouse dive in for shelter.

Mammals may also be affected. For example, as spring snows melt earlier, scientists believe that snowshoe hare’s white winter camouflage could be increasingly mismatched with the season, making them easier prey. 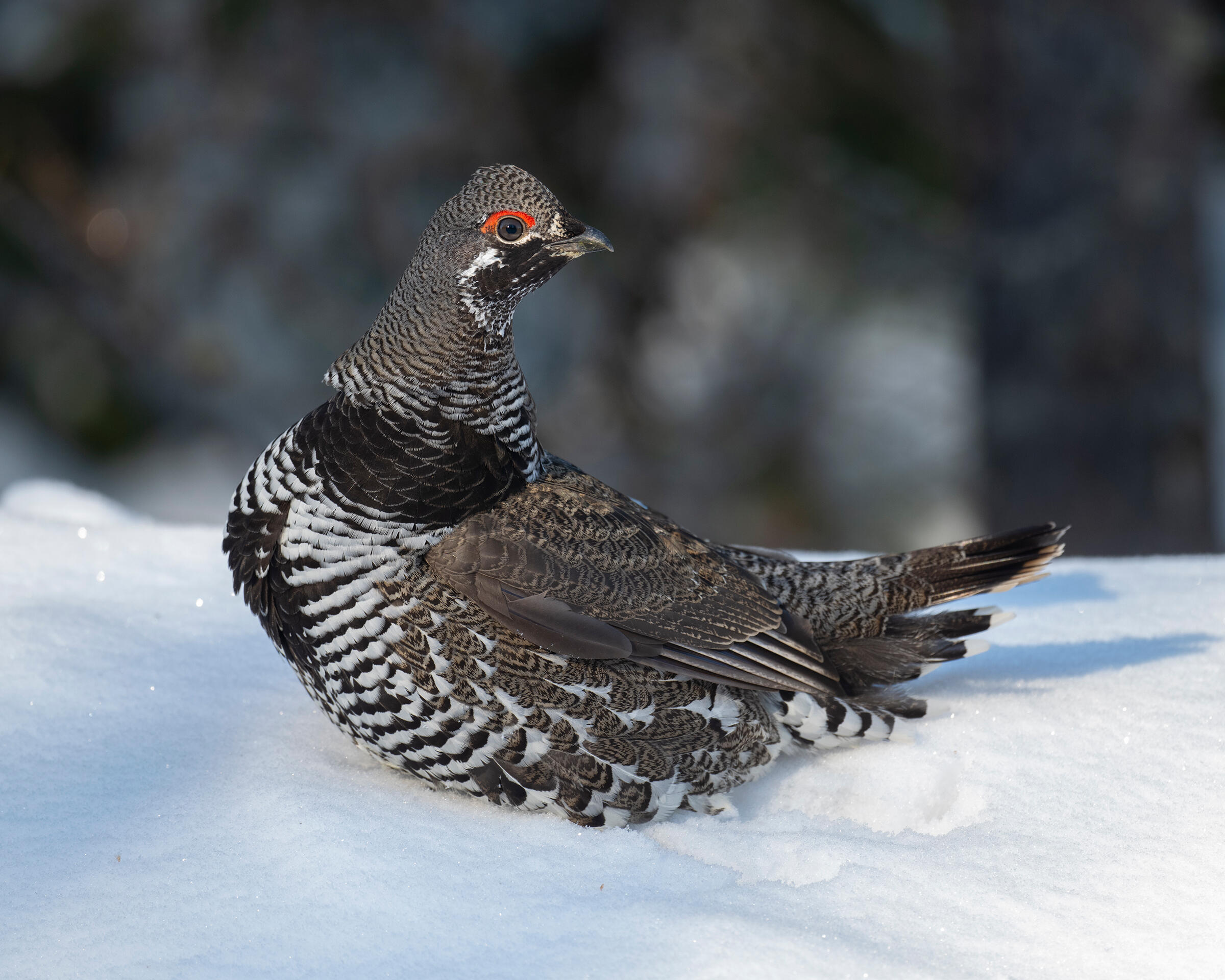 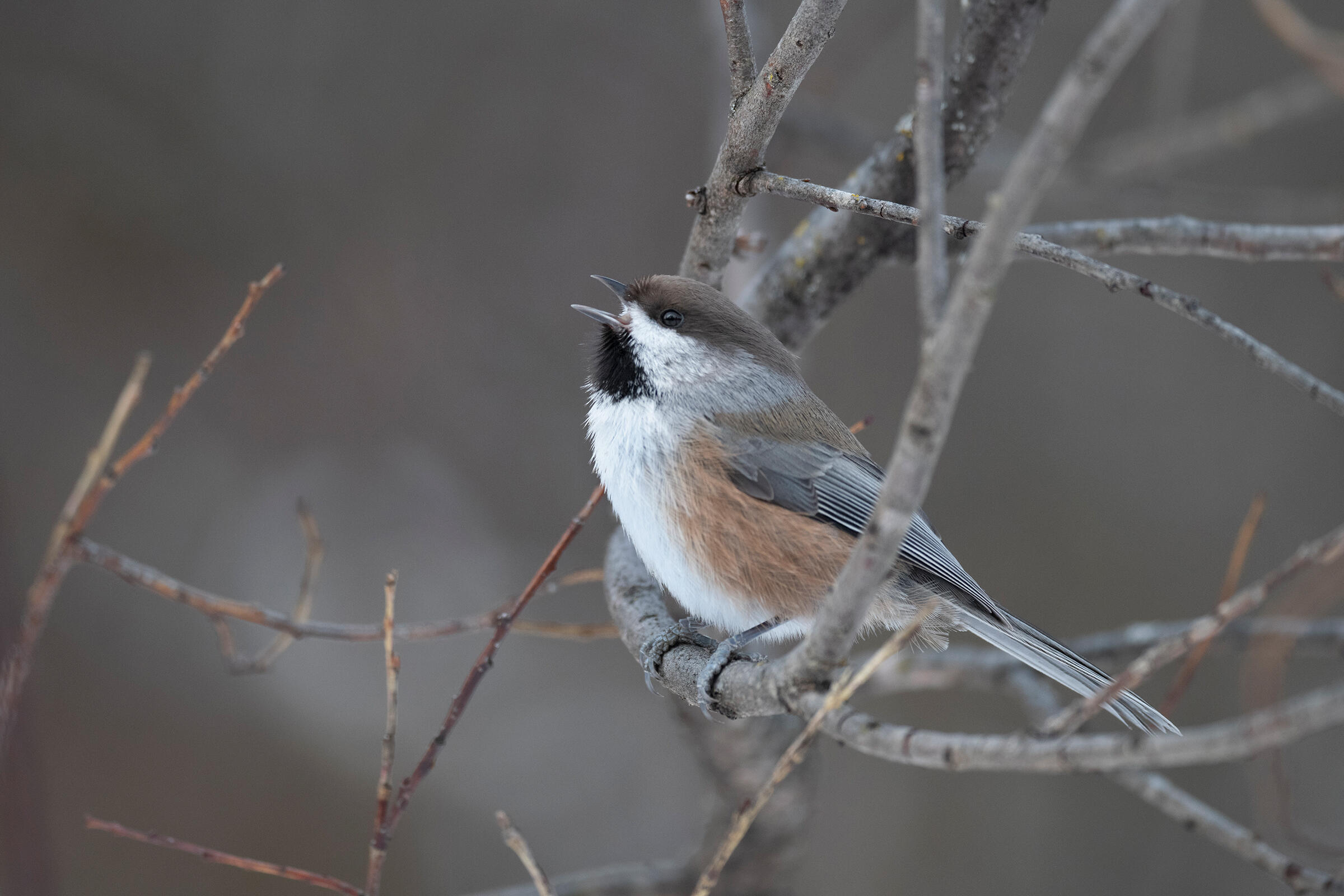 Boreal Chickadees are one of the few songbirds that stay in the boreal year-round. Photo: Benjamin Olson 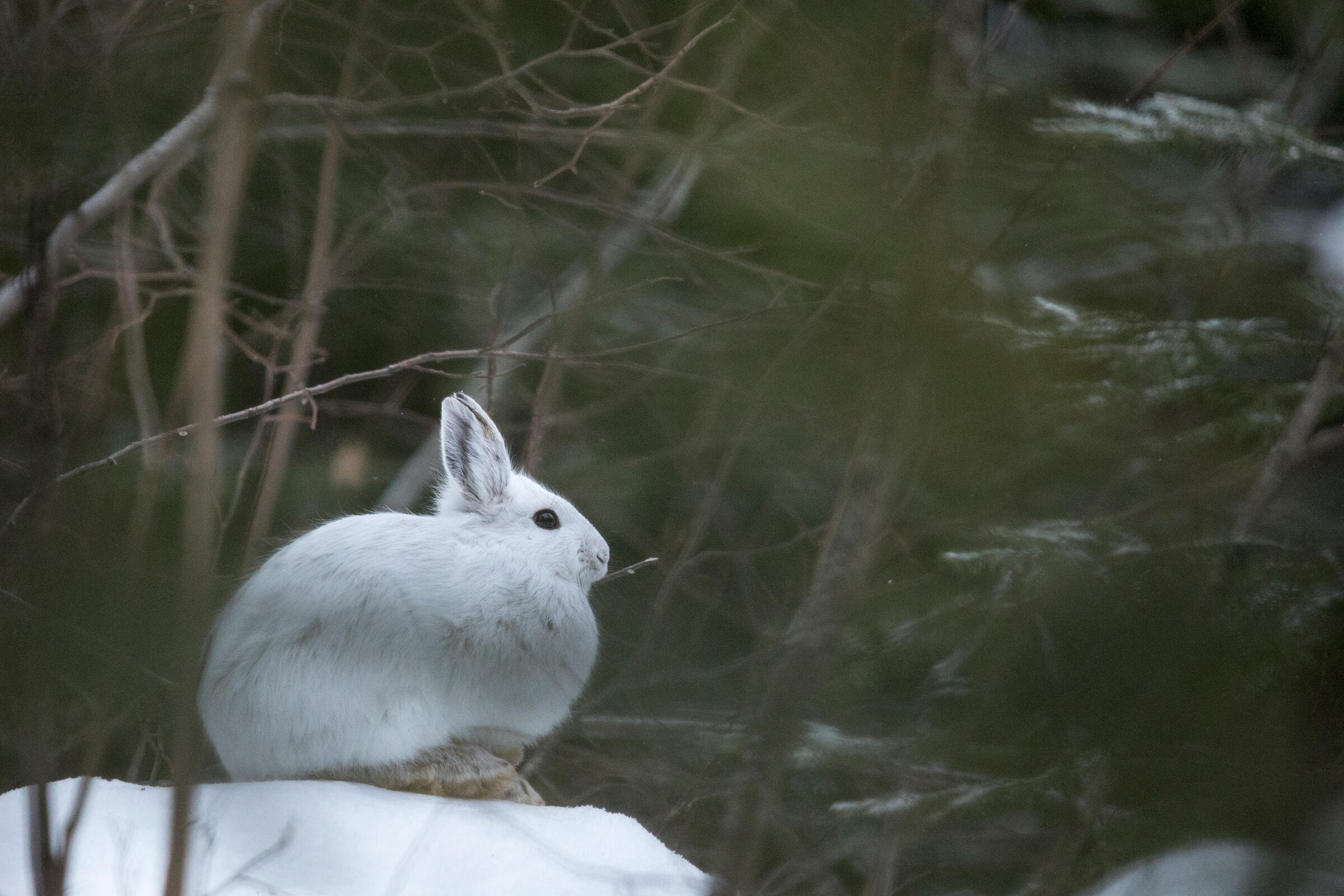 Common Loons, an upper Midwest icon, face many threats, such as ingesting lead fishing sinkers. But warming temperatures and changing precipitation patterns are raising the ante in myriad ways, including by boosting black fly populations.

The birds don’t readily abandon their nests, but when they do, fly attacks (pictured below on Lake Superior’s north shore) are often the cause, says Walter Piper, a scientist at Minnesota’s National Loon Center and professor at Chapman University. His data from the past decade show that loons in Wisconsin abandoned nests more often during abundant black fly years, contributing to local declines. Now he’s expanding his research to understand whether this holds true in Minnesota. If global warming reaches 3 degrees Celsius, which could happen as soon as 2080, Audubon’s climate models project Common Loons could almost entirely leave the Land of 10,000 Lakes. 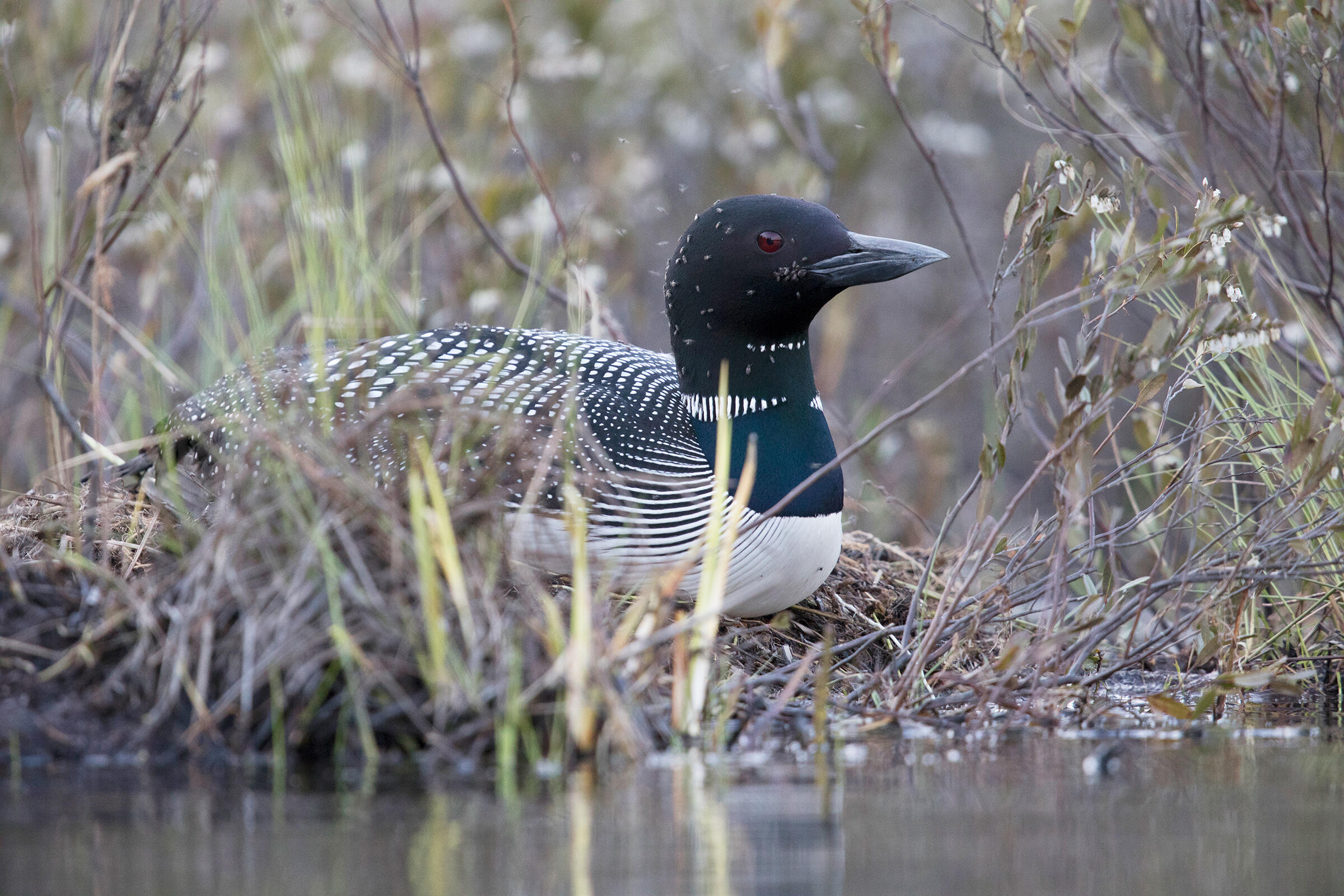 A Common Loon, sitting on a nest in Minnesota, is attacked by black flies. It later abandoned its nest. Photo: Benjamin Olson

Land and wildlife managers across Minnesota’s boreal zone are actively thinking about how to build resilience into ecosystems to help them withstand stresses from insect invasions, extreme weather, and warming temperatures, as well as help tree and animal species move and adapt. For example, in 2021 unusually severe drought-fueled wildfires burned in Superior National Forest. Conservationists and scientists there have been monitoring the regrowth. In one experiment using a strategy called assisted migration, the Nature Conservancy this summer worked with officials to reforest some trees that they hope will be able to tolerate a hotter future. 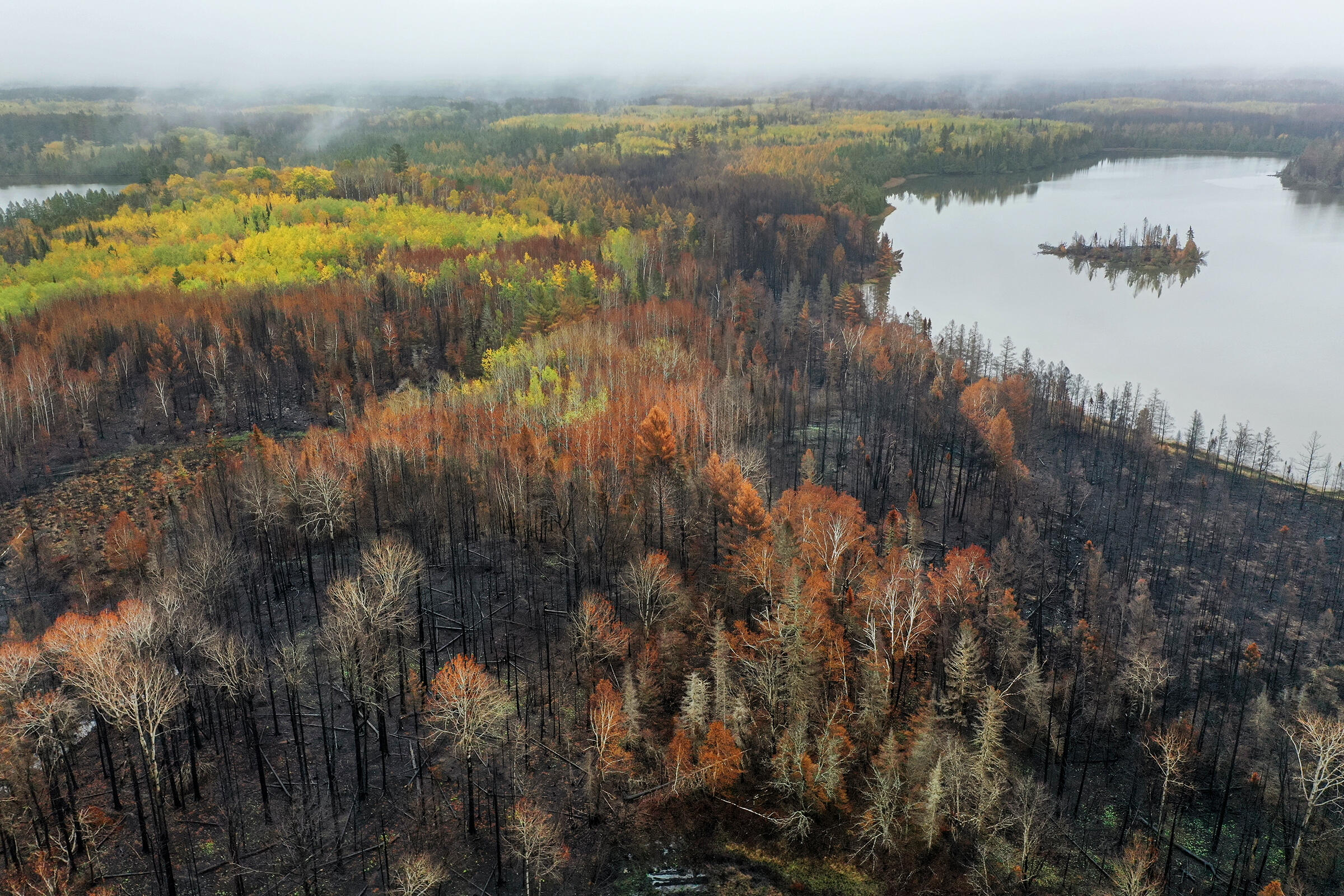 At Beltrami Island State Forest, located on the state’s drier western boreal edge, one of several adaptation strategies is increasing tree species diversity within and among forest stands. "If we lose one species, at least we’ll still have a forest," says Charlie Tucker, a wildlife supervisor at the Minnesota Department of Natural Resources Division of Fish and Wildlife.

Tucker and his colleagues have already singled out several climate-sensitive birds, including Spruce Grouse and Boreal Chickadees, they are actively managing and monitoring at Beltrami Island. The grouse there live in highest densities in the area’s thick jack pine forest, where they eat conifer needles, but these habitats may transition to thinner woodlands as the climate dries. “If jack pine does not regenerate as well under drier scenarios, then this will not bode well for Spruce Grouse in this area. We suspect they are already experiencing a northward range contraction, but data are lacking—other than anecdotally,” he says. Conversely, while there are no Kirtland’s Warblers at Beltrami Island State Forest currently, in the future, there may be plenty of woodland habitat that is suitable for them, he says.  Managers there are also doing experiments with timber harvest patterns in parts of the state forest to see how to best help birds that may be vulnerable. 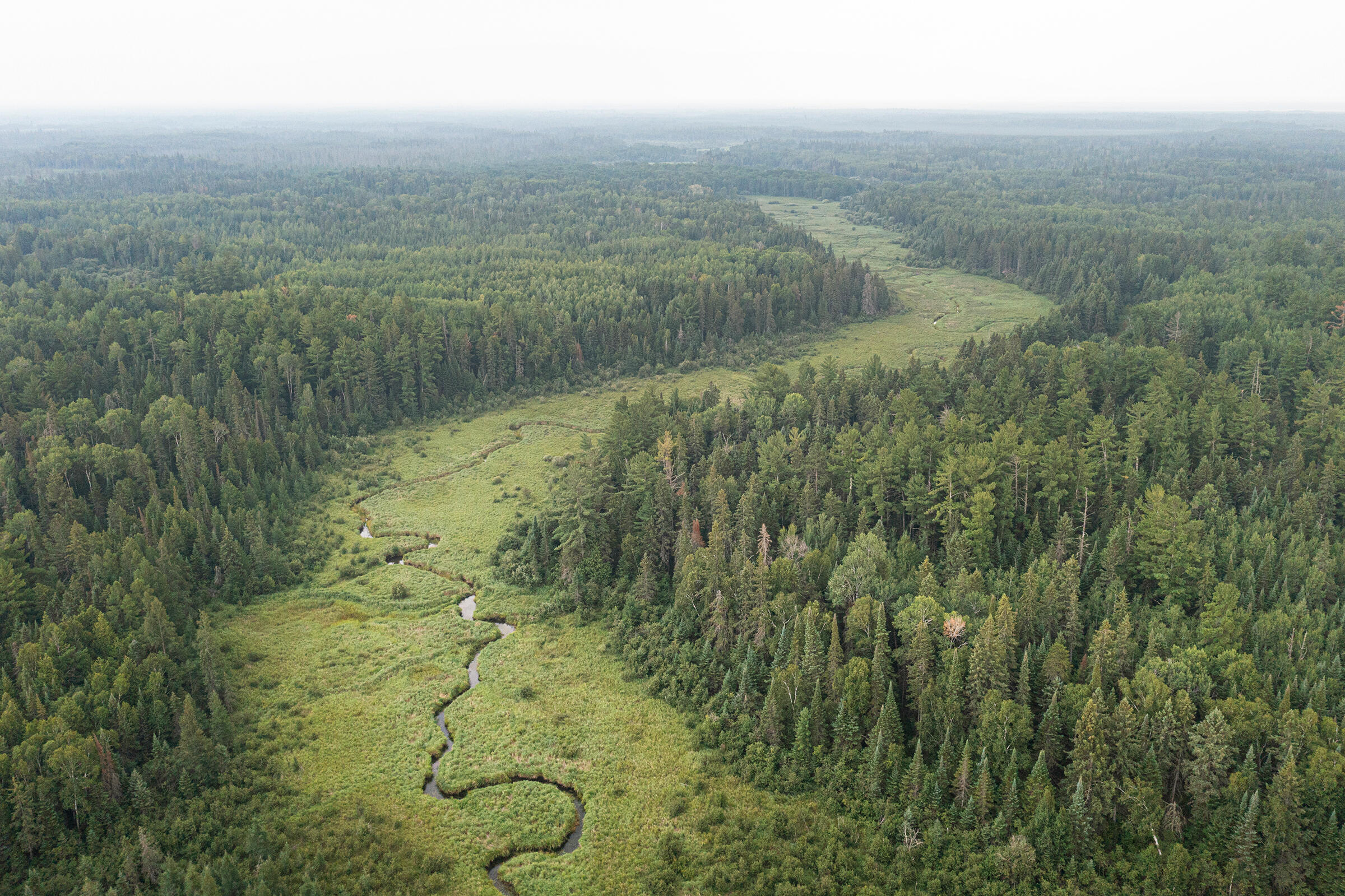 Some of Minnesota’s species are engineers of their own fate. Beavers are highly adaptable mammals that scientists believe will fare just fine as the global climate warms. When extreme flooding events occur, as they have across the state in 2022, beaver dams help boost the region’s resilience by storing sediment and filtering water. These structures even shape the flow of water on the landscape decades into the future, recent research from the University of Minnesota Duluth shows. And wherever beavers do their handiwork in a forest, wetlands follow creating habitat that attracts different kinds of avian species, including wading birds like the Great Blue Heron and a variety of waterfowl. 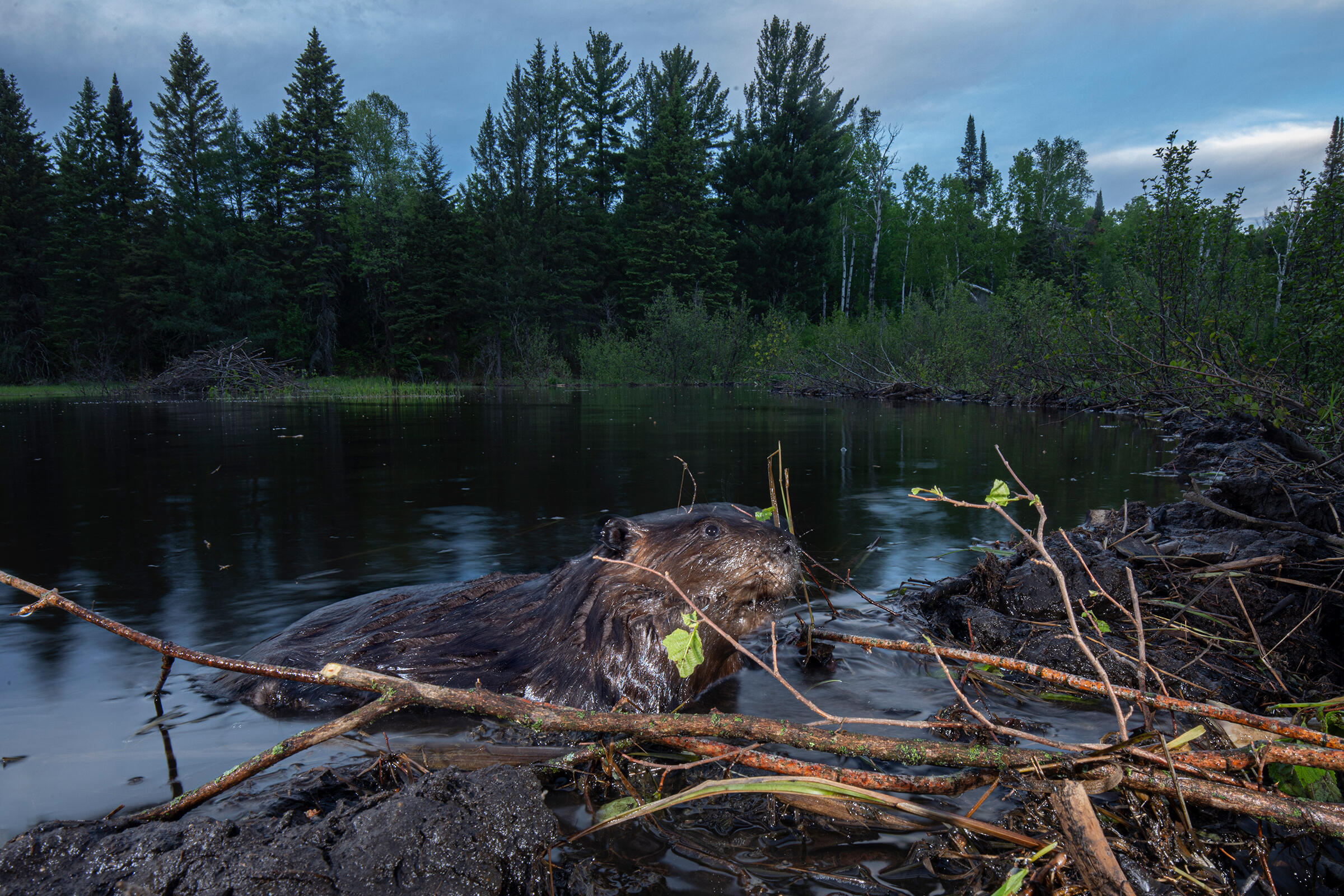