In “Seven Aunts,” author Staci Lola Drouillard paints a story of her own heritage and identity through writing grounded in a sense of place. Each chapter is devoted to a different aunt, as Drouillard paints a beautiful, loving picture that isn’t afraid to reveal harsh truths— about addiction, abuse, and illness, while also sharing moments of levity and deep care.

Continuing her work from her previous book, “Walking the Old Road,” which is about the history of Chippewa City, a mile and a half north of Grand Marais, Drouillard shares the story of her mixed heritage family. An Ojibwe descendent, Drouillard’s father is a Grand Portage Band member born and raised in the Grand Marais area as was his father, and his grandparents and his great-grandparents. “This is where I’m from, and we were raised very much in the Ojibwe way— on the water, in boats, and fishing,” she says.

Meanwhile, Drouillard’s mother’s side is German, something she hadn’t written about much previously. The families come together through the women in “Seven Aunts.” “We are a multicultural Minnesota family in the truest sense of the word,” Drouillard says. “We have immigrant history, we have Native history, and the history of French immigrants way back from Canada.”

Here’s an interview with Drouillard about writing “Seven Aunts,” and her process of putting it together. The interview is edited for length and clarity.

Sheila Regan: In “Seven Aunts,” you share that writing your previous book, “Walking the Old Road,” led you to the idea of writing about your aunts. Did you have an ‘aha’ moment, when you realized the path you need to take?

Staci Lola Drouillard: “Walking in the Old Road” was specifically about Chippewa City history, so the history of a physical place. For that book, I did interview a number of elders, including my aunt Gloria, who has her own chapter in “Seven Aunts.” When I was interviewing her about her childhood, and growing up on the North Shore, there was a lot of material in her interview that wasn’t quite appropriate for the history story in “Walking the Old Road,” but it was certainly interesting, and kind of enlightening about what it was like to grow up Ojibwe and French in a mixed-blood family in Grand Marais.

Then when I was considering what I wanted to write about next, I was involved in a writing group. For a short exercise, I wrote the essay called “Lila,” which was the beginning of the chapter about my aunt Lila. Lila was kind of like my second mom. When I started writing about her, I realized that there was a lot of personal history tied up in Lila’s story, and the story of the aunties, in general. I felt compelled to write about all of my aunts, because each of them in their own way, informed me as a person — who I am, where I come from. The themes that emerged, I think, are quite universal. And I felt that probably a lot of people could relate to that.

SR: “Seven Aunts” is so raw at times. You really go to even some beautiful places, but also some pretty dark times with your family members and their experiences. What was that like for you? 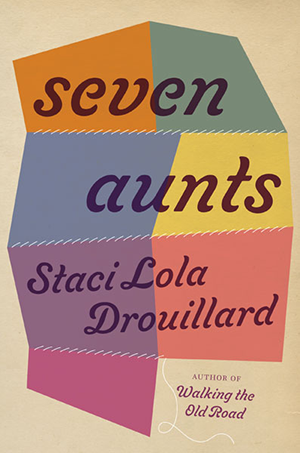 SLD: The lives of women are often very complicated. Truth be told, I had a choice. I could have written these chapters as fiction, in novel form, and use the lives of my aunties to inform fictional characters. But what I arrived at is that there’s a real lack of truth telling. I think there’s a paucity of truth in the world right now. So I decided to write the truth based on the lived lives of my aunts. Writing the truth, and right up to the edge of the truth was a real exercise, I think in writer’s integrity. I had to make a lot of decisions about what to include and what not to include and how to write something in a way that wasn’t going to cause anyone any further trauma. There was a lot of writing and rewriting and, and, and reforming of sentences, and in a lot of those chapters, because the truth will set you free, as they say, but also you have to be prepared for what the truth will unleash.

SR: Were you having conversations with, with your loved ones about what you were considering publishing?

SLD: I did reach out to a number of my cousins that are represented in each family, and gave them draft versions of chapters, or ran things by them to make sure that I had it right. And that they were comfortable with what I’d written. The point is to help heal the past traumas, and come together as a family with that shared history and not cause any further pain for anyone.

SR: What do you do to take care of yourself as you’re doing this work?

SLD: Well, that’s what’s very interesting, isn’t it? I wrote this book over the course of the COVID winters of 2020 and ‘21. We were mostly holed up here on Good Harbor Hill, and didn’t venture out very much. The physical act of writing — sitting in the chair for eight hours at a stretch, losing track of your physical body, while you’re unearthing these memories, takes its own toll on a person— just the actual writing. Some of the problems that presented themselves in the writing were only solved by taking a walk in the woods, or going for a snowshoe behind the house, or getting outside and getting some perspective.

SR: Where is  Good Harbor Hill?

SLD: It’s just west of Grand Marais. It’s a very steep hill, part of the  Sawtooth Mountains along the North Shore. We’re between zones three and five, for gardeners. We’re a little bit warmer, a little bit sunnier. And right on the edge of the maples.

SR: I’m actually pretty familiar with the area because my family has been on the Gunflint for over 20 years, and we’ve always stopped in Grand Marais. What do you think of Grand Marais now, having grown up there?

SLD: In “Walking the Old Road” I wrote about the evolution of this place from being Anishinaabe territory to being the Scandinavian Riviera. I’m really proud to be from here — born and raised in Grand Marais. My writing is often very place-based. I’m writing about this place, and the rich history, and what it’s like to live here, in this very beautiful place. It’s oftentimes an unforgiving place. The winters here are not for the faint of heart.

Staci Lola Drouillard will be presenting about her book at the South Dakota Festival of Books, at 12:30 p.m. on Sept. 23. She’ll also appear as a part of the “Moving Words” panel in Moorhead, which is a conversation with author Chris Stark, put together by the Friends of the St. Paul Public Library, on Sept. 26 at 7 p.m. More information here.