Ice on Great Lakes is expanding, expected to peak in typical range A MODIS satellite image of the Great Lakes on Jan, 20, 2022. Image: NOAA CoastWatch

Brave souls flocked to the accumulating shelf along Lake Michigan over the past couple weeks as frigid weather helped grow the Great Lakes ice cover.

Throughout January, ice across the basin expanded beyond early projections that suggested the winter of 2022 might feature near-record low ice coverage. Across the Great Lakes, the average long-term annual maximum ice cover is 55 percent. If the projection holds true, this year’s accumulation of frozen freshwater will remain below average but near what’s expected from a typical winter.

“Everything will be like normal life,” said Jia Wang, a NOAA GLERL climatologist who runs the lab’s closely watched but unofficial ice forecast, which bases its experimental modeling on global air circulation patterns called teleconnections. 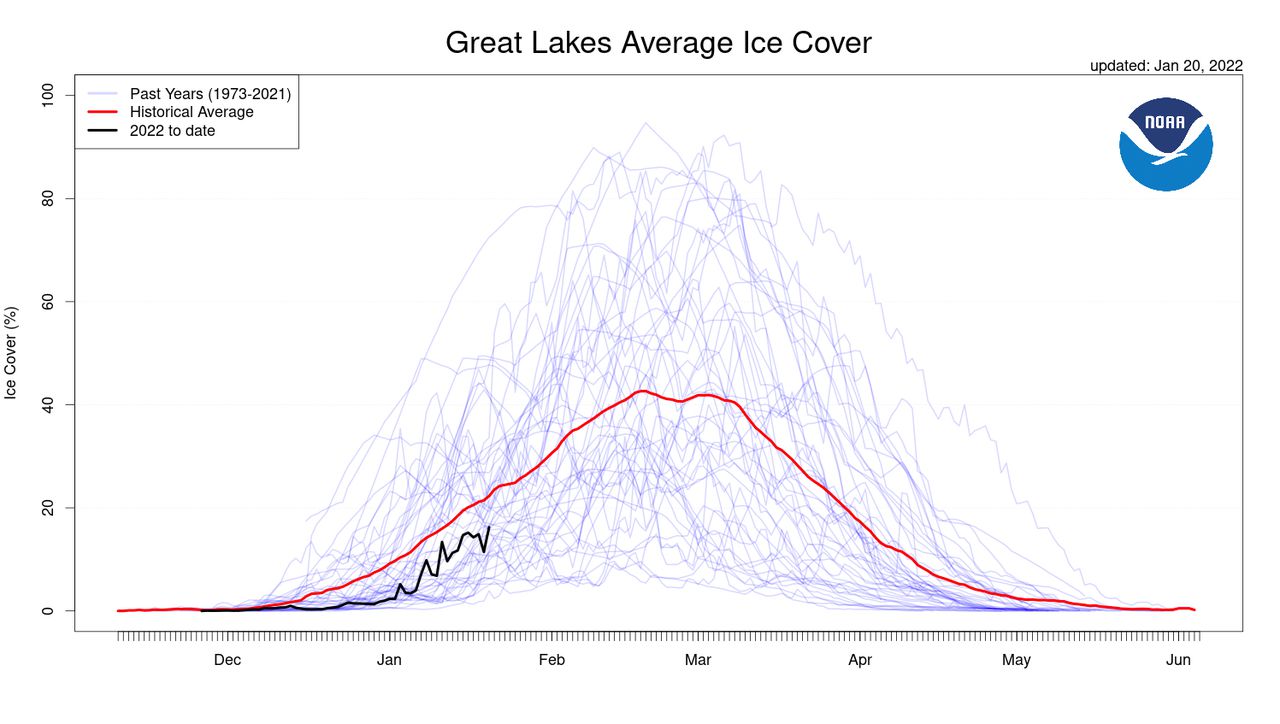 Thus far, ice has already grown well beyond its reach at this time in 2021, when the region went through a rollercoaster; entering February with about 10 percent ice cover before a bout of extreme cold caused that to spike to 46 percent over the following two weeks. By March, it was back to 13 percent.

Annual and month-to-month ice cover can swing widely, but, as human-induced climate change warms both the surface and deep waters of the Great Lakes, historical data from the past 40 years shows that total ice cover is on the long-term decline.

As of Thursday, Jan. 20, about 16 percent of the surface area of the lakes is frozen. Most of that ice is forming in protected waters that usually ice-up first, such as Green Bay, Saginaw Bay, Georgian Bay, Thunder Bay, the Straits of Mackinac, Lake St. Clair and western Lake Erie.

The U.S. Coast Guard began annual icebreaking in Lake Superior, Lake Michigan and Lake Huron this month to aid commercial shipping, which is limited primarily to the Lower Lakes after the annual closure of the Soo Locks.

According to the U.S. National Ice Center at NOAA, ice thickness ranges from two to six inches in most places. Thicker ice, of a foot or more, is forming in Little and Big Bays De Noc in Lake Michigan; Black and Nipigon Bays in Ontario, and Wisconsin’s Chequamegon Bay in Lake Superior.

The GLERL forecast is updated every couple of weeks and much of the freeze usually takes place in February.

“We’re still pretty early in the ice season,” said James Kessler, a scientist who also models ice cover at GLERL. “When you saw record lows predicted, that was based on information from December. Since then, some of the teleconnection indices have changed considerably. We re-ran the model and they are much higher predictions, closer to average.”