The mini-Titanic: British ship preserved for 107 years hundreds of feet under Lake Superior. A series of incredible photos captured by a diver show the wreckage of a hundred-year-old British ship which has been perfectly preserved at the bottom of a freezing lake.

The remarkable wreckage of 'The Gundila' - a 200ft-long craft built in Leith, Scotland - was caught on camera by intrepid photographer Becky Kagan Schott.

Becky and her team were able to find the eerie wreckage after diving to the bottom of a remote part of Lake Superior in the US where the ship ran aground over a century ago.

Spooky images captured by the team after they dived to 270 feet deep show the ship largely intact despite having sunk in 1911.

Becky, a professional underwater photographer, camerawoman and technical diving instructor, says that the dangerous dive was something that they had planned carefully for. 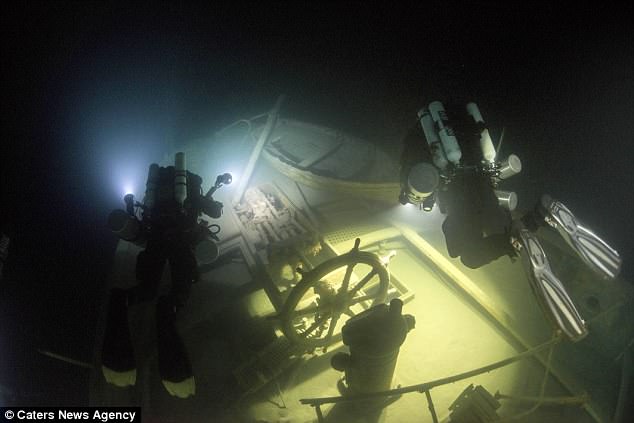 A team of extremely experienced divers were required to make the dive a success due to the remote location of the wreck. 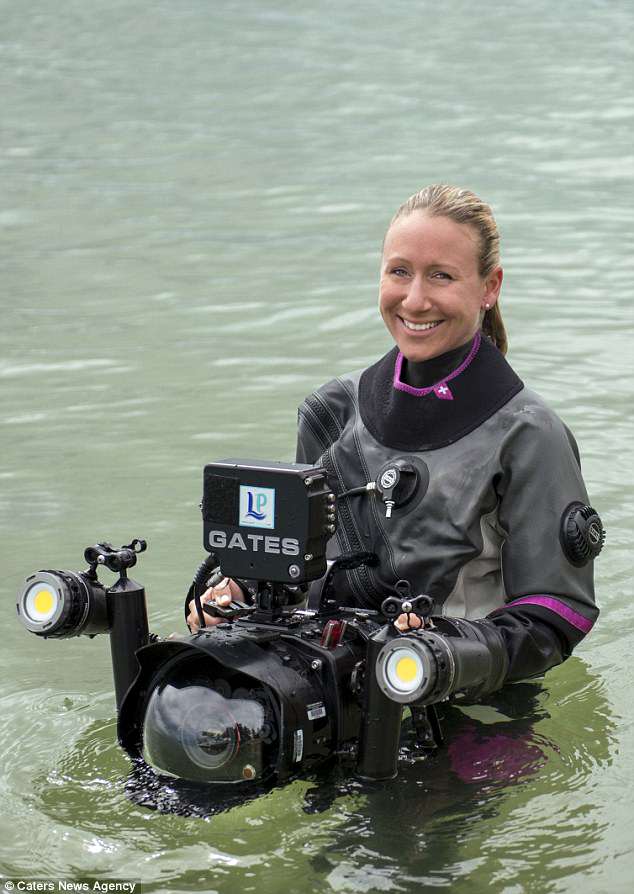 Becky, 35, from Philadelphia, Pennsylvania, said the wreckage was unlike anything she had ever seen and the fact that it was in such good condition made it really feel like she had travelled back in time.

Becky, 35, said: 'Visiting it was really like going back in time and it had a very haunting feel to it.

'I've never seen anything like it in all my years of shipwreck diving. For me it was almost surreal being there. I'd dreamed of seeing this shipwreck and it took years of experience both in diving and photography to be able to safely capture the images I saw in my mind.

'Peering inside windows to see a piano still in place or a card table and chairs next to a fireplace with a clock hanging above it and the galley with gold rimmed china still sitting on the shelf is pretty spectacular.'

According to Becky, not many divers have the privilege of visiting the Gunilda thanks mainly to its remote location, its depth 270ft  under the water and chilly 38f/3c temperatures.

And she said she needed a team of very well-trained divers to be able to make the trip a success. 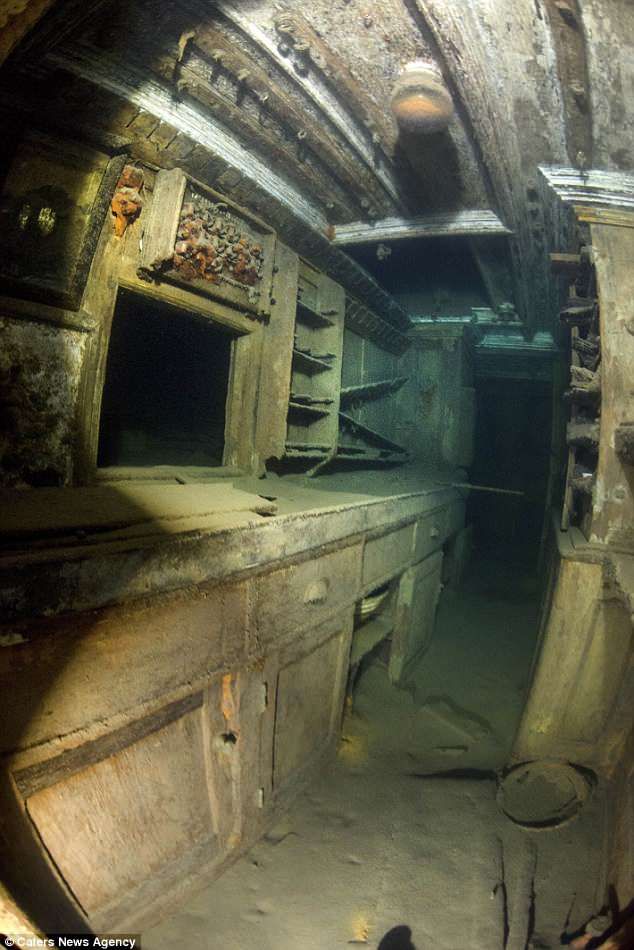 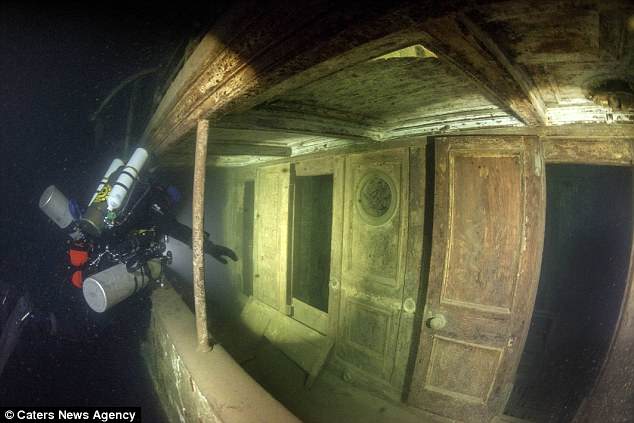 'I wanted to capture images of the wreck like she's never been seen before and that meant bringing a small team of highly experienced divers to assist,' she added.

'We only have 25 minutes at that depth to capture the shot before having to decompress for another 75 minutes to return to the surface.

'Everything has to be coordinated like a dance so in one shot there are 5 of us to capture the wide perspective of the gold leafed bow.

'It's completely black down there so coordination and communication are difficult.

Asked what was her favourite shot from the remarkable day-out, Becky said it was the one of the piano with a thin slither of light coming through the window behind it.

'I think it's a haunting image,' she said.

'It's as if she were sailing on the surface again.

'Many of my shots couldn't be accomplished without an excellent team and dedicated dive buddies. I'm appreciative to those people that assist and help me create these images.

'Doing these dives is pretty risky and potentially dangerous so we pride ourselves on putting together a plan to execute them. 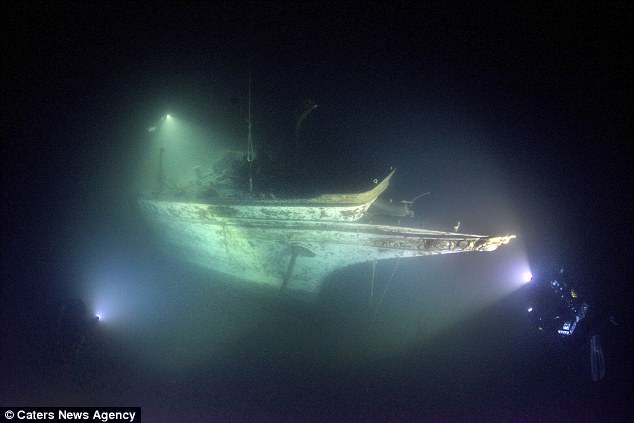 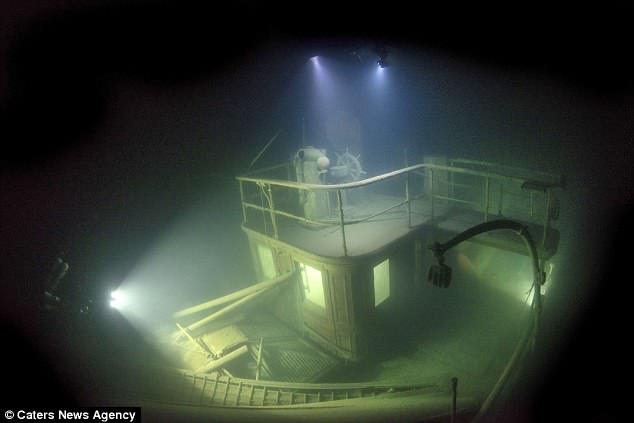 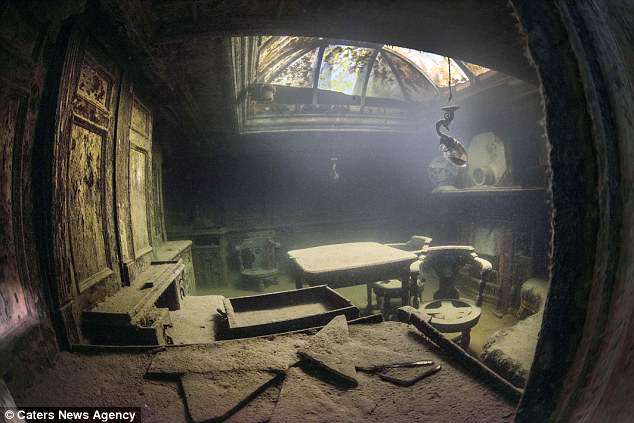 'It was no easy task to dive the Gunilda. It took years of experience technical diving on rebreathers and trimix, many work up dives in cold water and training for emergencies.

'It's dangerous diving to such deep depths in a remote location because there is little to no help. Then there are years of photography experience on top of that because working in deep, pitch black environments with limited time to capture images is no easy task.

Becky has dived all over the world but says the Great Lakes, like Lake Superior, is her favourite spot.

She said the connection with the history of the wrecks she visits allows her to shoot 'haunting' photographs.

'The stories of tragedy, mystery, and survival inspire me to shoot hauntingly artistic images of the wrecks and share their stories,' she continued.

'Each year more shipwrecks are found and new mysteries are solved and that's exciting to me.

'The Gunilda was not an easy place to get to but it's like visiting an underwater museum frozen in time and I'm looking forward to returning again.'

Read more on the Daily Mail website by following this link: http://www.dailymail.co.uk/news/article-5626037/Photographer-captures-incredible-wreck-British-ship-preserved-century-freezing-lake.html#ixzz5D23Wz9Xy