Rescue efforts being carried out for the SS Mataafa. Image: UW-Superior Lake Superior Maritime Collection
By Doug Martin of The Sun-Times News • November 19, 2022

Lake Superior is notorious for deadly November storms. Perhaps the worst was the Mataafa Storm of 1905, when 36 lives were lost, and 29 vessels were damaged or destroyed.

“Witches” are the name mariners have for the autumn storms that frequently occur across the Great Lakes. A witch is a strong wind with much stronger gusts. These events are at their worst in November when the frigid arctic winds chaotically rush in to fill the low atmospheric pressure of the warmer Great Lakes. Gordon Lightfoot lyrically describes such a storm in The Wreck of the Edmund Fitzgerald (I bet you can’t read the lyrics without singing the song in your head).

The wind in the wires made a tattle-tale sound
And a wave broke over the railing
And every man knew, as the captain did too
T'was the witch of November come stealin'
The dawn came late and the breakfast had to wait
When the gales of November came slashin'
When afternoon came it was freezin' rain
In the face of a hurricane west wind

As such, November has a cruel reputation on the Great Lakes, especially Lake Superior. The annual collision of high and low-pressure systems creates the potential for terrifying gales and precipitation, sometimes reaching hurricane force.

A storm had blown over Lake Superior on November 24, 1905, with 60 mph winds. Most ships were tucked safely away in their harbors, waiting out the blow. When the skies cleared, captains rushed to get their boats out for the final runs of the season. Weather forecasting was in its infancy, and in its place, maritime folklore determined that one storm would never follow on the heels of another.

The SS William Edenborn towing the barge Madeira had passed through the Soo Locks on November 26 and was headed west across Superior for a load of iron ore. But by suppertime the next day, Captain A.J. Talbot and his crew were battling 60 mph winds “with snow beating down so thick and so fierce that one could not hold his face to the storm a moment,” First Mate William Hormig would later say. 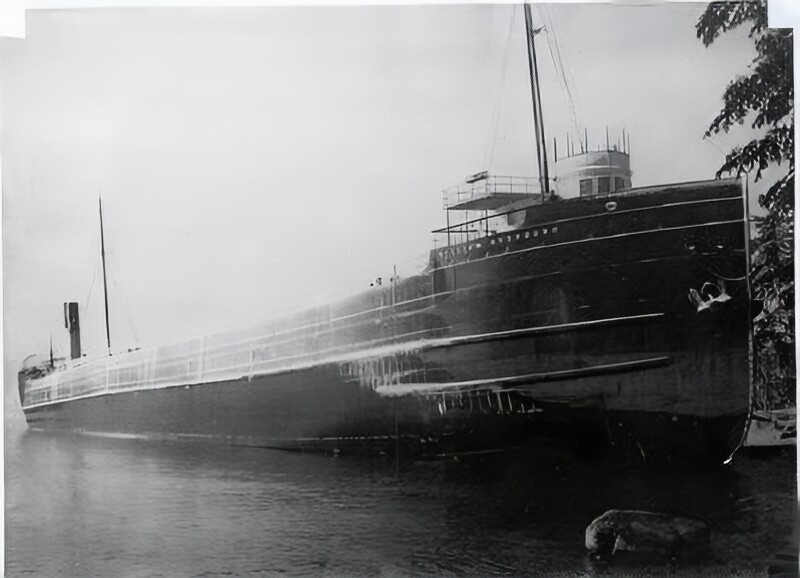 SS Edenborn aground after the storm. Credit: Wikipedia. Public Domain.

For the next 12 hours, they battled through the waves and wind, which gusted to 80 mph. Hurricane-force winds begin at 74 mph. In the blinding nighttime snow and absence of modern technology, the captain and crew overshot the safety of the Apostle Islands, located near the Wisconsin-Michigan border. At 3:30 am on November 28, a loud crack like a rifle shot was heard. The Edenborn suddenly lurched forward. The tow cable between the two vessels had snapped. The unpowered barge Madeira and its crew were adrift in the storm.

Captain Talbot would later testify that the snow was so thick they could see only half the length of the ship, and waves were “piling over her stern in volumes of solid water.” In 1905, primary communication between vessels was ship whistles and megaphones, useless in the howling winds. Given the danger of the powerful wind and waves and the proximity of the barge, Talbot traveled forward for an hour before giving the call to turn back for the Madeira. But just then, a tremendous sound was heard. The Edenborn had run aground at the cliffs on Minnesota’s shore. The wrecked vessel did not sink. One sailor lost his life falling into a damaged hold during the storm, but the rest survived.

The Edenborn’s barge, Madeira, drifted at the mercy of the storm until it also crashed headlong into Minnesota’s cliffs. As the barge repeatedly hit and broke against the high cliffs, death for the crew was imminent. However, one sailor put a coil of rope around him, and when the ship struck the rocks again, he jumped onto the wet and slippery cliff. With the storm still raging and in the dark of night, he scrambled his way up through the rock, ice, and snow. He lowered the rope to his mates. All but one were saved.

The day before, on November 27, at 5:00 pm, the SS Mataafa left Duluth, Minnesota, with a load of iron ore, towing the barge, James Nasmyth. An hour later, already strong winds increased to 44 mph sustained winds.

The Mataafa continued into the night. But when the storm intensified to 60 mph winds, the ship could no longer make any forward progress. Captain Humble turned around to head back to Duluth.

Like the other ships' captains that night, Humble was sailing blind for hours. By a stroke of providence, a brief reprieve in the storm revealed Duluth’s harbor lights. As the two vessels approached the harbor, Humble realized it would be impossible to navigate both vessels through the harbor’s narrow entrance canal in the high waves. He cut the Nasmyth and its crew loose, leaving them to the mercy of the storm. Humble then tried to bring the Mataafa into port, a disastrous decision. With the lack of modern communications, Humble couldn’t have known two ships had already attempted to “shoot the chute” with catastrophic results.

Now in the early light of day, Humble charged the canal at full speed, perhaps thinking speed would give him control in the turbulent sea. Instead, the waves lifted and turned the Mataafa from its course, crashing it into the north pier. Undeterred, Humble tried again and struck the pier again. The waves now dragged the disabled vessel back out to sea. Humble called to let go the anchors. They did not set, and the ship beached 700 feet offshore. The ship’s hull had cracked open, and the crew was forced on deck in the storm as the Mataafa settled into the water.

Humble shouted through the megaphone for help, but his words were lost in the storm. Even if he had been heard, the life-saving crew was busy with one of the earlier wrecks. The 24 men had no choice but to wait until rescuers could reach them. 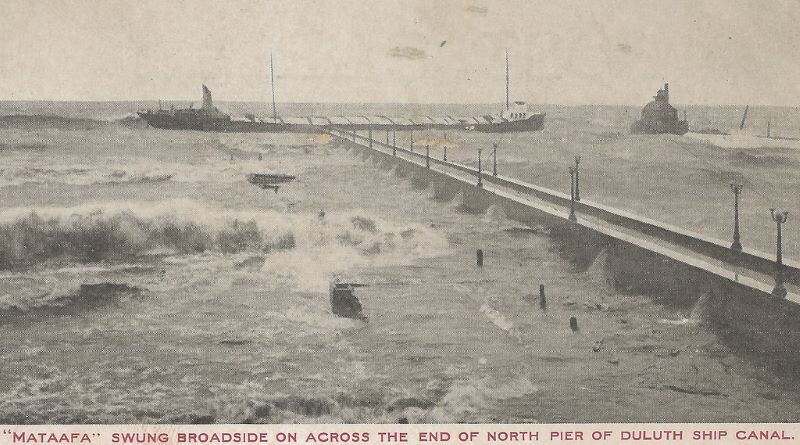 That day, an estimated 10,000 onlookers crowded the shoreline as rescue efforts were carried out for the Mataafa. Fifteen crew members were rescued. Five of the nine who perished were frozen to the deck. One had to be cut out of the ice. The notoriety of the Mataafa rescue is how the storm was named. The barge, James Nasmyth and its crew, that Humble had cut loose, survived the storm. The Nasmyth continued its service until it was scrapped in 1984.

In the Mataafa Storm of 1905, the witch of November crashed eleven vessels into the 47-mile stretch of Minnesota cliffs between Split Rock and Duluth. The SS Ira H. Own and its 14 crew members disappeared without a trace near the Apostle Islands. Some have reported sighting it as a ghost ship. Thirty-six sailors lost their lives in the Mataafa Storm, and some 29 vessels were damaged or destroyed.