Why are mallard duck populations falling in the Great Lakes region? Two major studies are underway to try to better understand why mallard duck populations are declining in the U.S. Researchers are using new technology to help solve the mystery.

Recently, Ben Luukkonen met up with a Michigan Department of Natural Resources wildlife team and staff from Ducks Unlimited next to a small lake in a rural area near Saginaw.

Luukkonen is a PhD student at Michigan State University. He’s working toward becoming a wildlife biologist — just like his dad, who used to take him on research trips when he was a kid.

“The first time I can remember I was maybe five or six years old, and we were goose banding and that was a lot of fun. It was almost like a goose rodeo,” Luukkonen said.

While there are plenty of Canada geese around the small lake where he’s set up his gear, Luukkonen’s job on this day is examining mallard ducks.

“Mallards are one of the most-studied ducks. But despite all that research, we still have a lot of questions,” he said.

Researchers have been trying to figure out what’s going on with the population of the birds. But the COVID pandemic put a damper on mallard duck research, despite a worrisome decline in certain regions. 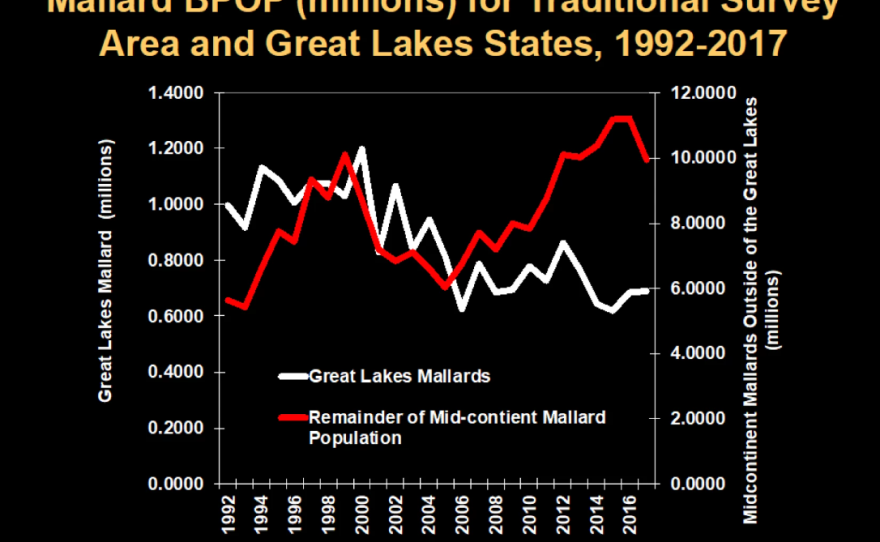 Researchers divide the mallard duck populations by the geographic areas they frequent. They call one larger area of mallards the mid-continent population. Then there’s a smaller subsection called the Great Lakes population.

Coluccy said the Great Lakes population has been down by about 16-17%. It’s even worse in the Atlantic region, where the mallard population is down about 50%.

The weird thing is that in Canada, the number of mallards is going up.

“So, the population decline is being driven by the U.S. birds,” Coluccy said.

Two large-scale studies are underway, one in the Great Lakes region and one in the U.S. Atlantic region. State and federal agencies, colleges and private groups such as Ducks Unlimited are all involved. 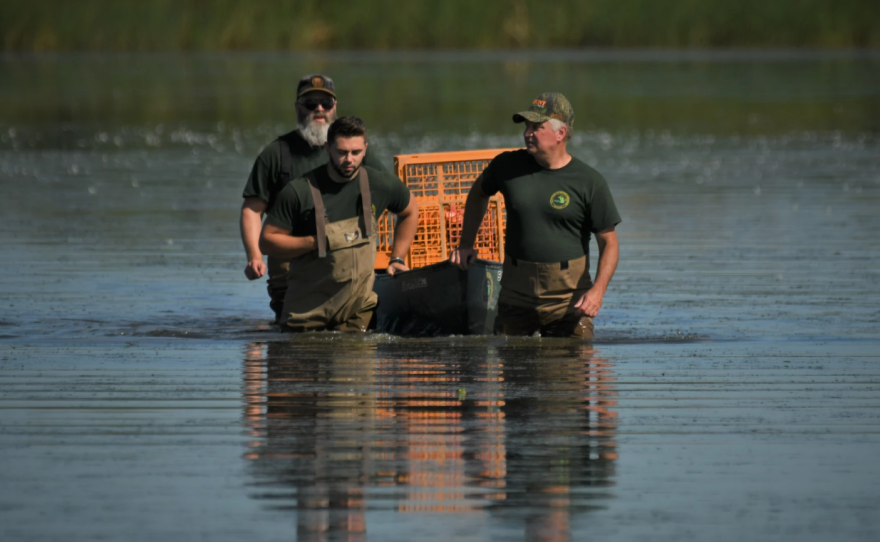 The DNR wildlife team took a canoe to a small island in the lake to retrieve ducks. There was only one mallard hen for Ben Luukkonen to examine.

The new technology that’s going to help researchers better track the mallard ducks’ behaviors is a small solar-powered GPS mobile transmitter that’s strapped on the duck’s back. It’s kind of like a small back pack.

“With these transmitters, we're getting literally thousands of data points. So, we get much more refined scale and detailed information about individual birds: Where they go, what they do. Do they survive? Do they hatch ducklings? And we can scale what we learn from individual birds up to a population level and learn things about the population as a whole,” Luukkonen said.

There are basically three theories about why the mallard population is down in the Great Lakes region since the early 2000s.

Kylie McElrath with Ducks Unlimited said the first theory is that ever-expanding development is affecting the mallard reproduction and survival. 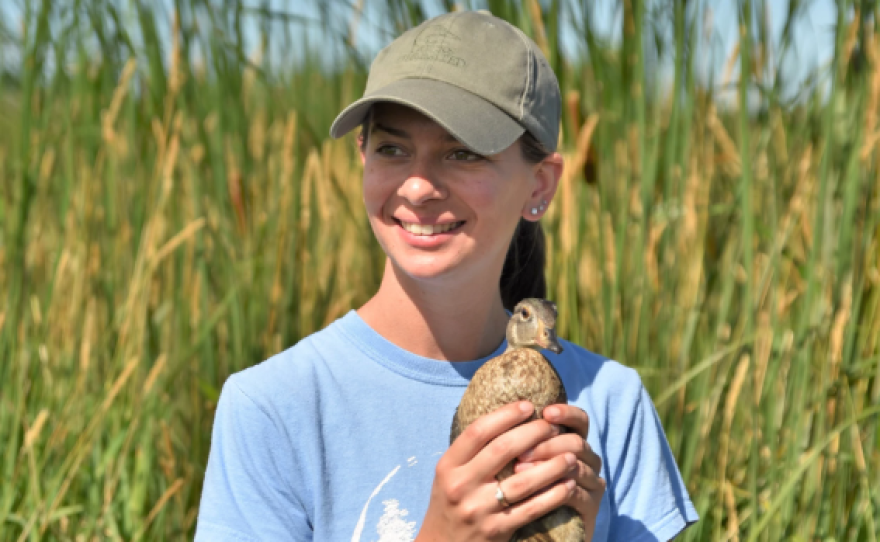 Kylie McElrath with Ducks Unlimited holding a duck that's to be banded for research. Lester Graham

“Due to habitat loss and degradation and fragmentation. So, that's a big part of what Ducks Unlimited does, is we help put that habitat back on the ground.”

Vast stretches of wetlands throughout the Great Lakes region have been destroyed since European settlement, first by farming and then by urban sprawl.

You recall that John Coluccy said mallard populations in Canada are growing, but they’re declining in the U.S.? A second theory is that more ducks are nesting farther north into Canada because of climate change.

A third theory is a little more complicated. For decades, hunting groups have been raising domestic mallards on game farms and releasing them to increase the population. The experts speculate that because the genes are different, the birds' instincts are different. They’re smaller in body size. They’re not adapted to natural environments.

Researchers such as Luukkonen are taking genetic samples of the ducks they examine. It’s early in the study, but they’ve found an unexpectedly large proportion of hybrid birds: 44%.

“And so if these domestic birds are breeding with wild birds and passing on those maladaptive traits, it stands to reason that those might be affecting negatively the mallard population in the wild,” Luukkonen said.

There’s not enough data to know for certain whether some of those theories, all of them or different factors are affecting the mallard duck population.

After Luukkonen takes samples of blood, a wing clipping, and several measurements of the mallard hen, he straps on the little solar-powered transmitter and the bird is freed.

“The real data collection is just begun. That transmitter should give us thousands if not tens of thousands of GPS locations. So, we’re going to learn a lot about what this bird does and where she goes,” he said. 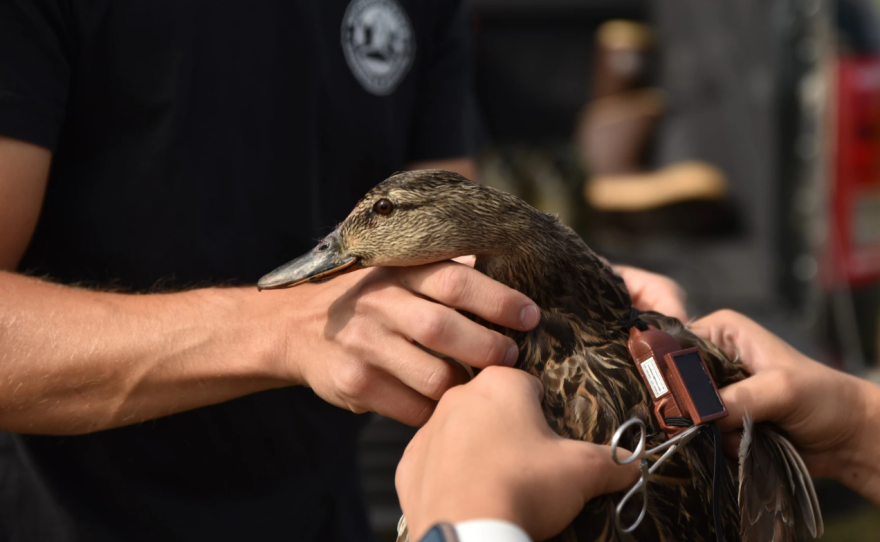 The light-weight solar-powered GSM and GPS transmitter will send location information to researchers to help determine the behavior of the mallard hen. Lester Graham

These new transmitters, which can gather so much more data about the mallards’ behaviors, are a game changer. Researchers understand what’s happening a lot faster than they could with other methods.

Meanwhile, the DNR team is banding some other types of ducks they’ve caught. Small aluminum bands are stamped with a unique number and placed on a leg of each duck. When a duck shot by a hunter and the number is reported, they can see how far that duck traveled. If another research team captures the duck and reports the band number, they’ll enter the location. So, a lucky duck that lives long enough might be reported more than once or twice. That’s two or three data points compared to a transmitter that’s reporting thousands of times about the ducks location in the air or on the ground.

Until now, making decisions about the best places to help ducks has been based partly on banding data that might take decades to gather.

“You know, if we're putting in marshes and habitats in one part of the state based on what we knew 30 years ago, when in reality the birds have gone to another corner of the state to avoid humans or to adapt differently. We need to know that,” said Chris Sebastian with Ducks Unlimited.

Still, it will be two or three years before researchers can begin to piece together the huge mallard data dump they’re beginning to receive from the transmitters. John Coluccy quipped that there will be so much new and different information that researchers will be busy sifting through it for years to come.

To read this original story and more news, follow this link to the WKAR Public Radio News website.