Even relatively modest climate warming and associated precipitation shifts may dramatically alter Earth’s northernmost forests, which constitute one of the planet’s largest nearly intact forested ecosystems and are home to a big chunk of the planet’s terrestrial carbon.

That’s the main finding from a unique five-year experiment, led by a University of Michigan ecologist, that used infrared lamps and soil heating cables to study the projected impacts of near-term climate change on thousands of seedlings from nine tree species found in far northern forests, which are known as boreal forests.

North America’s boreal forests contain mostly conifers such as spruce, fir and pine. They are found mainly in Canada and Alaska but also occur in parts of northeastern Minnesota, a tiny bit of Michigan’s Upper Peninsula, and northern Maine. The boreal forests are bounded on the north by tundra and on the south by temperate forest.

In the experiment, young trees at two University of Minnesota forest sites in northeastern Minnesota were warmed around the clock, from early spring to late fall, in the open air without the use of greenhouses or growth chambers. Two levels of potential 21st-century climate warming were used: roughly 1.6 degrees Celsius (about 2.9 degrees Fahrenheit) and roughly 3.1 C (about 5.6 F) above ambient temperatures.

In addition, movable tarps were positioned above half the plots before some storms to capture rainwater and mimic precipitation shifts under a changing climate. As a control, some of the trees were grown at ambient temperatures and moisture levels.

The study found that even modest (1.6 C) climate warming produced major problems for many species, including reduced growth and increased mortality. In addition, reduced rainfall amplified the negative effects of warming on the survival of several boreal species.

“Our results spell problems for the health and diversity of future regional forests,” said U-M forest ecologist Peter Reich, lead author of the study published Aug. 10 in the journal Nature.

“Present-day southern boreal forest may reach a tipping point with even modest climate warming, resulting in a major compositional shift with potential adverse impacts on the health and diversity of regional forests,” said Reich, director of the Institute for Global Change Biology at the University of Michigan’s School for Environment and Sustainability.

“Those impacts could reduce the capacity of our forests to produce timber, to host other plant, microbial and animal diversity, to dampen flooding, and—perhaps most important of all—to scrub carbon out of the air and hold it in wood and soil.”

According to scientists, mid- to high-latitude plants are likely to experience both positive and negative effects of 21st-century climate change. In some places—especially the far north—a longer growing season may boost tree growth when moisture is abundant.

In other locations, warmer and drier conditions could lead to declines in tree growth and survival. Observational studies show that both positive and negative trends in boreal forest survival and growth are already happening.

But direct experimental tests of the effects of climate warming on boreal forests across a range of soil moisture conditions are rare and have generally been limited in size, scope and duration, according to the authors of the new study. 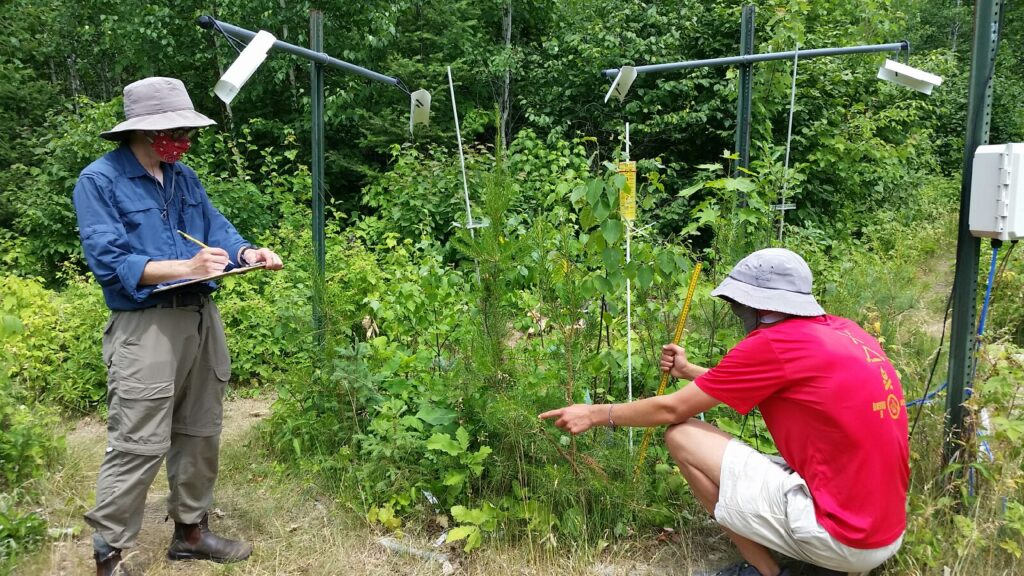 The Nature report fills many of those knowledge gaps. The study used joint manipulation of temperature and rainfall to examine the likely effects of near-term climate change on juvenile tree mortality and growth at the two field sites.

“In the experiment, we are subjecting forest plots to temperatures that we won’t see for another 40 or 50 or 60 years to understand what those oncoming temperatures will do,” Reich said.

At the same time, modest warming enhanced the growth of some broadleaved hardwoods, including some oaks and maples, which are scarce in the boreal forest but much more common in temperate forests to the south.

However, the new study concludes that hardwoods are likely too rare in the southern boreal forest to rapidly fill the void left by vanishing conifers. Therefore, near-term projected climate change will likely shift present-day boreal forest into “a new state” of altered composition.

“That new state is, at best, likely to be a more impoverished version of our current forest,” Reich said. “At worst, it could include high levels of invasive woody shrubs, which are already common at the temperate-boreal border and are moving north quickly.”

The experiment was conducted at two University of Minnesota field stations. Reich, who joined the U-M faculty in 2021, maintains a joint affiliation at Minnesota and continues to collaborate on the forest-warming project.

The other authors of the Nature paper are Raimundo Bermudez, Rebecca Montgomery, Karen Rice, Sarah Hobbie and Artur Stefanski of the University of Minnesota, and Roy Rich of the Smithsonian Environmental Research Center. The research was supported by the U.S. Department of Energy, National Science Foundation, Minnesota Agricultural Experiment Station and University of Minnesota.