Minnesota Is a Biking Paradise. Here Are the Best Trails to Hit. With its notoriously bitter winters, Minnesota doesn't outwardly scream "bike friendly." But the North Star State is actually a cyclist's paradise, with its rolling landscape, lakeside splendor, and winding trails consistently landing it among the top five destinations according to the League of American Bicyclists. Even its largest city has been crowned for most bikeable city in the United States from multiple sources.

As many travelers plan to stick closer to home and explore the wonders of domestic adventures this year, it’s prime time to see what the land of 10,000 lakes has to offer in terms of bike trails. (It’s actually closer to 12,000... no big deal). The state's filled with excellent trails, and the below offer entry points into the very best of Minnesota's two-wheeled wonders. 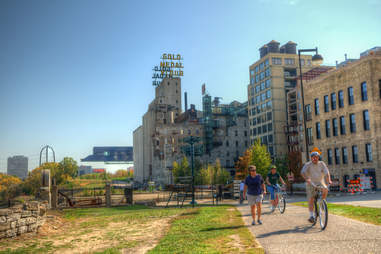 Twin Cities
Best for: Pretty much anybody who can ride a bike
Connecting some of Minneapolis' most popular parks and sites, this loop spiderwebs out to an astounding 100 miles of hiking and biking trails. Highlights along one of America's best urban trail networks includes the iconic Chain of Lakes stretch, which focuses on the beautiful waterfront areas southwest of downtown proper (pro tip: time the ride right and you can ride to the soundtrack of bands playing at the Lake Harriet Bandshell). Other can't miss jaunts include the  1.2-mile Downtown Riverfront ride and a 9.2-mile section along the Mississippi, where you can spot some of the famous water power that made Minneapolis the former world flour capital.
MORE:  Don't forget to stop at some of Minneapolis' best breweries 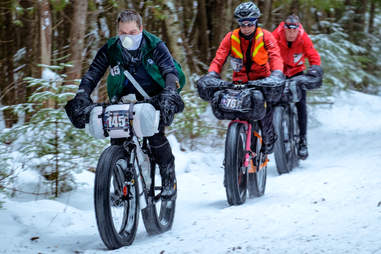 Northeast Minnesota/International Falls
Best for: Hardcore yetis on two wheels; warm-weather cyclists of all skill levels
Way up along the Ontario border, International Falls is home of the Arrowhead 135 a hardcore bike/ski/run ultramathon that follws the Arrowhead State Trail, pushing athletes over patches of compact snow and piles of newly fallen fluff. For those uninterested in frostbite, though, the other three seasons offer a chance for all skill levels to wind through the majestic Superior National Forest and the untouched wilds of the Boundary Waters region.

The Arrowhead Trail passes by two of the state’s largest and most scenic lakes: the storied Lake Vermillion and Kabetogama Lake. In addition, the trail intersects with the well-loved Taconite State Trail near the town of Tower and is super close to Voyageurs National Park and Soudan Underground Mine State Park, in case you want to explore this spectacular region further. Just remember to check with the Minnesota Department of Natural Resources before you go: many parts of this trail become too wet for summertime cycling. 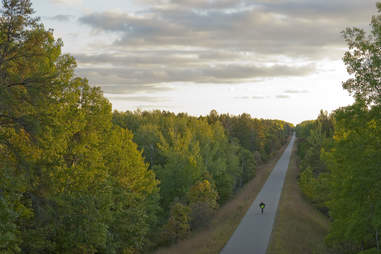 Brainerd to Bemidji
Best for: A long, leisurely, flat ride through the Minnesota Lakes Region
With 115 miles of scenic trailways, Paul Bunyan State Trail is the longest continuously paved rail-trail in the entire country, making it as highly accessible as it is stunning. Extending all the way from Crow Wing Park to Lake Bemidji State Park in north-central Minnesota, it was inducted into the Rail-Trail Hall of Fame -- which is very much a thing -- in 2011.

Along the trail, you'll spy loons swimming in nearby lakes and seemingly endless, verdant pine forests. For an extra dose of Midwestern kitsch, stop in Hackensack -- home of a legendary chainsaw carving contest in September -- to view the famed statue of Paul Bunyan’s sweetheart, Lucette. Behind her, take the pier into Birch Lake, then fuel up on Thai food at Udoms before continuing down the trail. 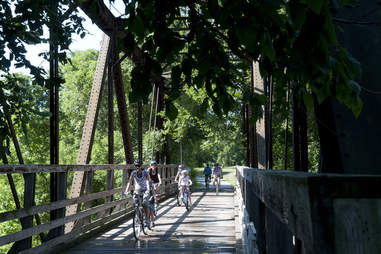 Driftless Region, Southeastern Minnesota
Best for: Experts and amateurs looking to explore Minnesota's rolling bluffs
Referred to in Minnesota as the “Cadillac of Trails,” the Red Root River State Trail is a railroad track-turned-bike path located along the state’s southern border with Iowa. It offers 42 paved miles with beautiful scenery that includes limestone cliffs and 300 foot-bluffs, rolling pastures, and the Root River. And with plenty of pit stops, sights to see and attractions along the trail, cyclists will be entertained by more than just the landscape.

The warmest small town on the route is Lanesboro, known as “the heart of Bluff country.” Part of the famed Driftless Area -- which the glaciers skipped the last time around -- the historic and artsy downtown boasts the Another Time Ice Cream Parlor, the Commonweal Theater, Pedal Pushers Cafe, and the unmissable sweet rolls at Lanesboro Pastry Shoppe. 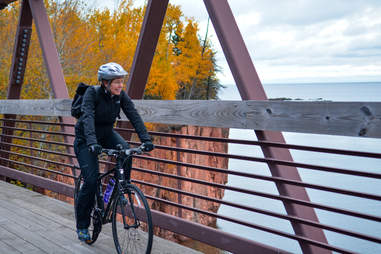 North Shore
Best for: Beginners and pros looking for unmatched lakeside views
The Gitchi-Gami State Trail is a work in progress: When complete, it will be an 88-mile paved trail that hugs the dramatic North Shore of Lake Superior, connecting Two Harbors to Grand Marais and passing through five state parks along the way. Currently, roughly 29 miles of the trail have been completed and paved. 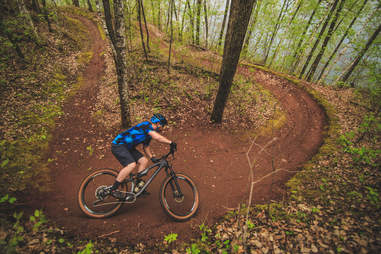 Cuyana
Best for: Beginner mountain bikers and white-knuckle thrill-seekers
Once home to several iron ore mines, in the past decade the central city of Cuyuna has been reborn as one of the state’s top mountain-biking destinations and is one of just 15 Silver Ride Centers in the world. With more than 30 miles of mixed-difficulty singletrack trails catering to beginners and adrenaline junkies alike, Cuyuna Lakes Mountain Bike Trails offer great lake views and vistas of former pit mines that have filled with water over time for a hauntingly scenic display. When you’ve had your fill of the trails, switch to a kayak, canoe, or paddle board and dip into one the many pristine lakes in the area. 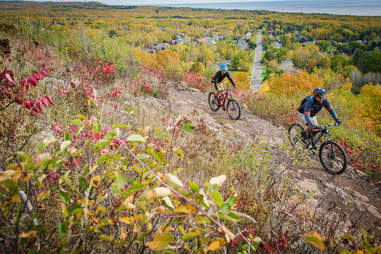 Duluth
Best for: Exploring Duluth's parks and cityscape, either at a leisurely or breakneck pace
Coined the “Crown Jewel of the North” for mountain biking trails, Duluth Traverse is expected to be completed this year, but its near-completion status hasn't prevented it from being designated one of just seven Gold Ride Centers in the world. The 40-mile network of singletrack, doubletrack, and gravel trails also connects to other, more difficult local mountain biking trails that can be explored year-round. These trail networks are easily accessible by stopping at Lester Park, Hartley Park, Piedmont-Brewer Park, Spirit Mountain and Mission Creek. Visitors to Bob Dylan’s birthplace should view the city’s impressive Aerial Lift Bridge while they imbibe on local libations at the nearby Vikre Distillery, which makes an exemplary aquavit to help you toast the area's Nordic roots. 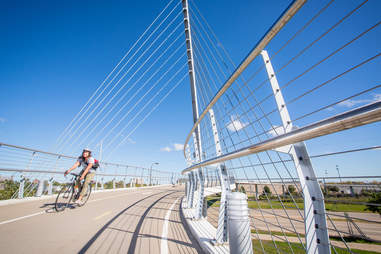 Twin Cities
Best for: A less-intensive crash course in MPLS bike culture
This Twin Cities treasure is actually a former railroad corridor, AKA a rail trail. It winds through south Minneapolis for over 5 miles while expertly showcasing two of its most prominent features, the Mighty Mississippi and the lakes in the so-called "City of Lakes." A testament to how residents have embraced two wheels over four, biking this barrier-free trail is actually faster than driving to the same endpoint. Keep an eye out for the pretty Soo Line Community Garden, a permanent fixture in the neighborhood.

While here, take the time to explore and support the diverse eateries and businesses along East Lake Street, an area that is now forever changed but remains a beacon of hope and community spirit running parallel to the Midtown Greenway. Take time to reflect in solidarity while viewing the vivid and stirring BLM murals that have sprung up around the area.

Sign up here for our daily Thrillist email, get Next Flight Out for more travel coverage, and subscribe here for our YouTube channel to get your fix of the best in food/drink/fun.

Katy Spratte Joyce is a Midwest born-and-bred writer with extreme reactions to the term "flyover country." She holds strong opinions about lakes, Dairy Queen, and Paul Bunyan. Her work has appeared in Travel + Leisure, The New York Times, Chilled Magazine, and more. Follow her @katysjoyce.


To see the original story and read more outdoors reporting, follow this link to the thrills.com website.  https://www.thrillist.com/shopping/nation/fathers-day-gift-ideas-2020
Outdoors