Icy, snow-covered lakes are a normal part of Midwest winters, but Great Lakes ice cover is taking a big dip this year in Michigan and other states, weather experts say.

The National Oceanic and Atmospheric Administration's Great Lakes Environmental Research Laboratory found that as of Thursday, the Great Lakes ice cover was 17.6%.

Last year at this time, the ice cover hovered around 67%, according to the National Weather Service in Duluth, Minnesota.

Even last week, on Valentine's Day, the figure was closer to 17%, with water widely visible; typically around Feb. 14, Great Lakes ice cover, on average, is 41%, NASA's Earth Observatory said.

February 20th 2020 vs 2019 #GreatLakes ice cover. About 16% ice cover today compared to 66% at this time last year in the depths of a prolonged cold outbreak. #mnwx #wiwx @NOAA_GLERL 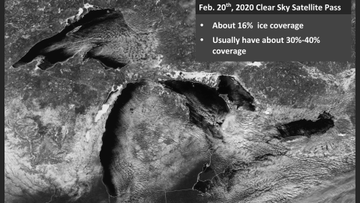 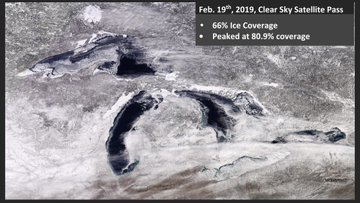 Why the change? Jia Wang, an ice climatologist at NOAA’s Great Lakes Environmental Research Laboratory, attributed it to warmer air temperatures this season, according to Earth Observatory.

While Metro Detroit has had seasonable conditions this week, that's set to change in the coming days. After topping out in the 30s on Friday, the mercury is forecast to climb into the 40s Saturday and near 50 on Sunday, the National Weather Service said.

Dry conditions with below normal temperatures continue today and tonight before a warming trend begins this weekend. #nwsdtx #Miwx 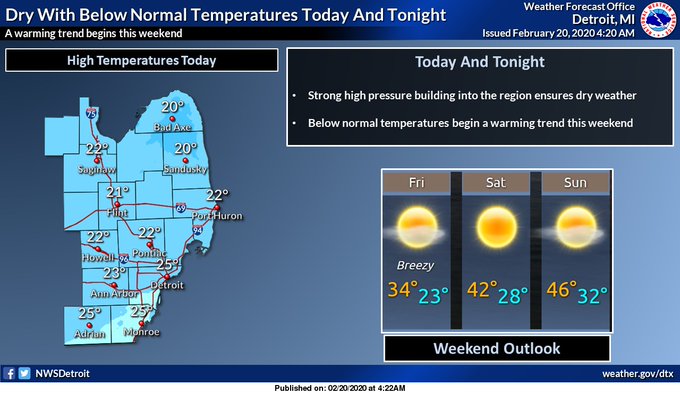 To read the original article and see related reporting, follow this link to the Detroit News website.  https://www.detroitnews.com/story/news/local/michigan/2020/02/21/ice-cover-down-great-lakes-michigan...