The National Weather Service (NWS) in Grand Rapids, Michigan, captured a photo of two "ice volcanoes" erupting on Oval Beach in Saugatuck, near Lake Michigan, over the weekend.

"It was a great day to visit the beach and watch the waves interact with the ice," NWS tweeted. "Here's a couple 'ice volcanoes' erupting at Oval Beach on Sunday, February 16, 2020."

It was a great day to visit the beach and watch the waves interact with the ice. Here's a couple "ice volcanoes" erupting at Oval Beach on Sunday, February 16, 2020. #miwx #wmiwx 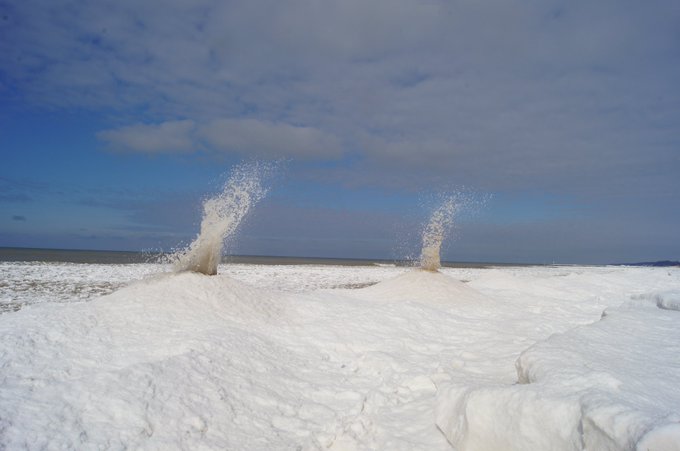 Volcanoes and ice may sound like an unusual combination but according to Michigan Tech, they are a regular occurrence on the north shore of Lake Superior, north of Lake Michigan, in the winter months and can range in size from less than a meter to more than eight.

An ice volcano requires three things—high surf, cool temperatures and ice. For an ice volcano to form, wave activity must be at least a meter tall at their highest. According to Michigan Tech, anything less is too small to create the volcano's cone.

These volcanoes form at the edge of the ice shelf, caused by the movement of high surf hitting the face of the formation. Small valleys can cause the energy of the waves to concentrate, prompting larger waves to form that eject a spatter onto the ice shelf in certain places.

If the cones remain active but become completely enclosed by the ice shelf, wave energy from below can push water up through any cracks or openings—causing eruptions like those shown in the NWS photograph. 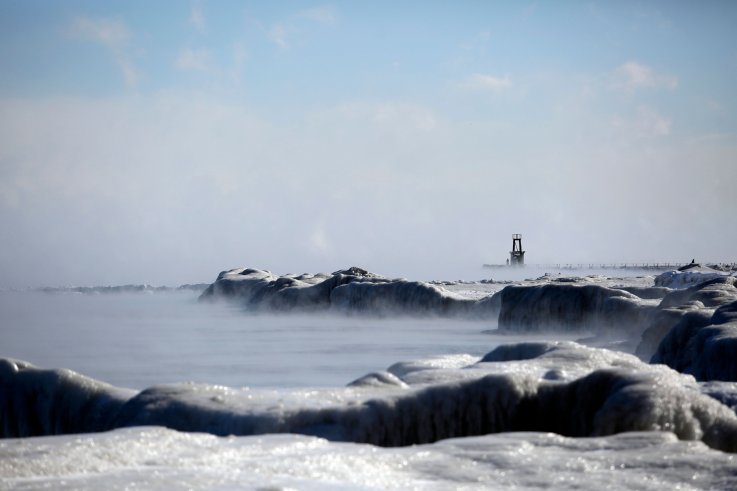 Ice volcanoes are typically found in arcs along the shoreline. They are often evenly spaced apart but can also form individually. Michigan Tech refers to these lone structures as "cold spot" ice volcanoes, and describes them as "nearly symmetrical single cones that apparently are not related to shoreline, sand bar or rock reef arcs."

These solitary cones form near the shore and are thought to be a result of a weakness in the ice. However, they have not yet been observed in an active state.

The phenomena has been observed on the shores of Lake Erie.

In Duluth, Minnesota, a human-made incarnation was created by a spewing fire hydrant. According to Lake Superior Duluth Streams, the city allowed Orange Street's fire hydrant to spray water during the winter months to prevent the supply pipe freezing over.

This is not the only type of ice volcano that exists in the solar system. Evidence of ice volcanoes (or cryovolcanoes) have been found on Ceres, Titan and Pluto. These differ from the volcanoes we have on Earth. Instead of ejecting molten rock, they emit substances such as water, ammonia and methane.

"To put them in perspective, if Mount Vesuvius had been a cryovolcano, its lava would have frozen the residents of Pompeii," Rosaly Lopes, a Cassini radar team investigation scientist from NASA, said in a statement in 2008.

To read the original story and see related reporting, follow this link to the Newsweek website.  https://www.newsweek.com/ice-volcanoes-lake-superior-michigan-1487618