Microplastics are filling the Great Lakes and birds’ bellies Thanks to some three-year-old bird remains, researchers at the University of Toronto have discovered that you can’t run, swim or fly from plastics in the Great Lakes.

“There’s nothing that is immune from plastic pollution,” said Cole Brookson, lead author of “Microplastics in the diet of nestling double-crested cormorants (Phalacrocorax auritus), an obligate piscivore in a freshwater ecosystem.”

In 2014, wildlife toxicologist Shane de Solla harvested the livers and lungs of double-crested cormorant chicks to study gene mutations. He stored the remains in a freezer. Three years later, those remains became part of one of the first ever projects to study microplastics and birds in the Great Lakes.

“We didn’t really know anything about birds and microplastics in the Great Lakes prior to this,” said Kim Fernie, a wildlife toxicologist and principle investigator on the project.

The gastrointestinal tracts of 30 cormorant chicks from three colonies were dissected for this study which was published in the Canadian Journal of Fisheries and Aquatic Sciences. Two colonies were located in Hamilton Harbor near manufacturing facilities in Lake Ontario while the others were from the remote Mohawk Island in Lake Erie.

Researchers found man-made debris such as microplastics, fibers from clothing, paint, synthetic leather and glass in 26 of the 30 birds, according to the study.

Brookson predicted that the birds from colonies in urban areas would contain a greater amount of microplastics than those that were farther from civilization, but he was wrong.

There was no statistical difference in the amount of debris found in birds from the remote Mohawk Island and the birds from the urban Hamilton Harbor.

“That means microplastics could be pretty evenly distributed throughout the Great Lakes.”

However, a possible confounding effect could be the fact that Mohawk Island is a few miles downstream from the mouth of the Grand River in Ontario, which receives waste from 30 municipal wastewater treatment plants, according to the study.

“There’s a chance that a lot of the plastic we saw in those birds was… getting dumped out from the Grand River,” Brookson said. “But obviously we can’t test for this with the data we have right now.” 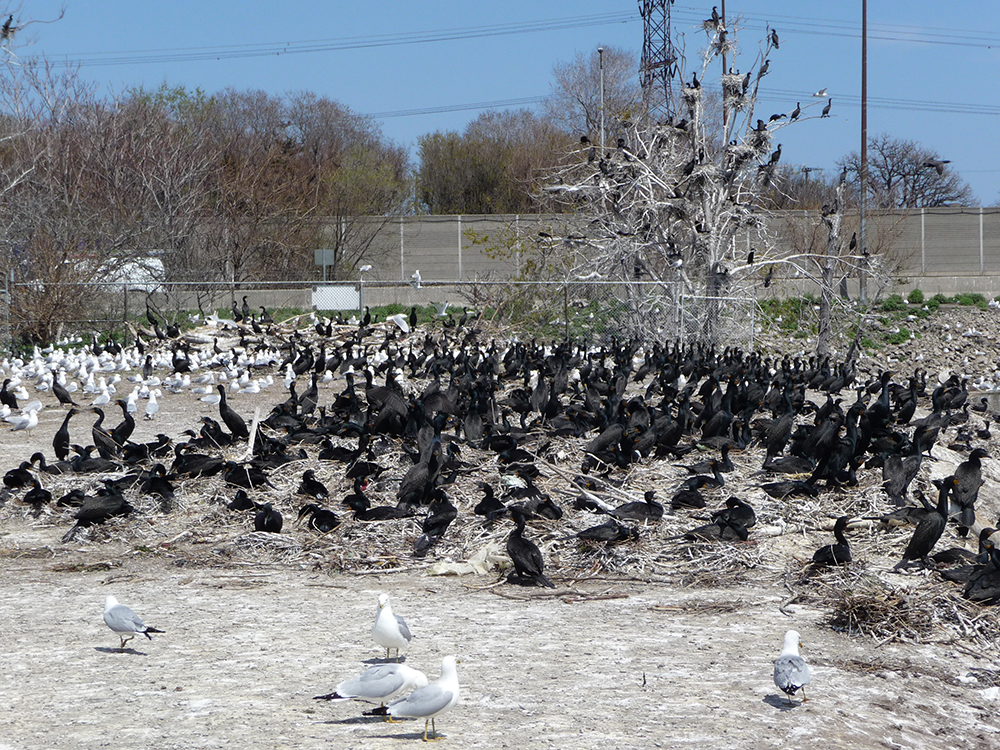 Perhaps more alarming is that the cormorants contained microplastics at all, according to de Solla.

“They eat only fish and nothing else,” de Solla said.

This means that cormorants don’t eat plastic directly. Rather, fish are eating plastic, adult cormorants are eating fish, and cormorant chicks are eating the plastics from the fish regurgitated by their mothers.

Plastic affects all kinds of marine life. Animals will eat large pieces of plastic until they feel full and then die from lack of proper nutrition, Fernie said.

Microplastics can come from large plastics that are broken down by the environment, de Solla said. Their effects are still mostly unknown. 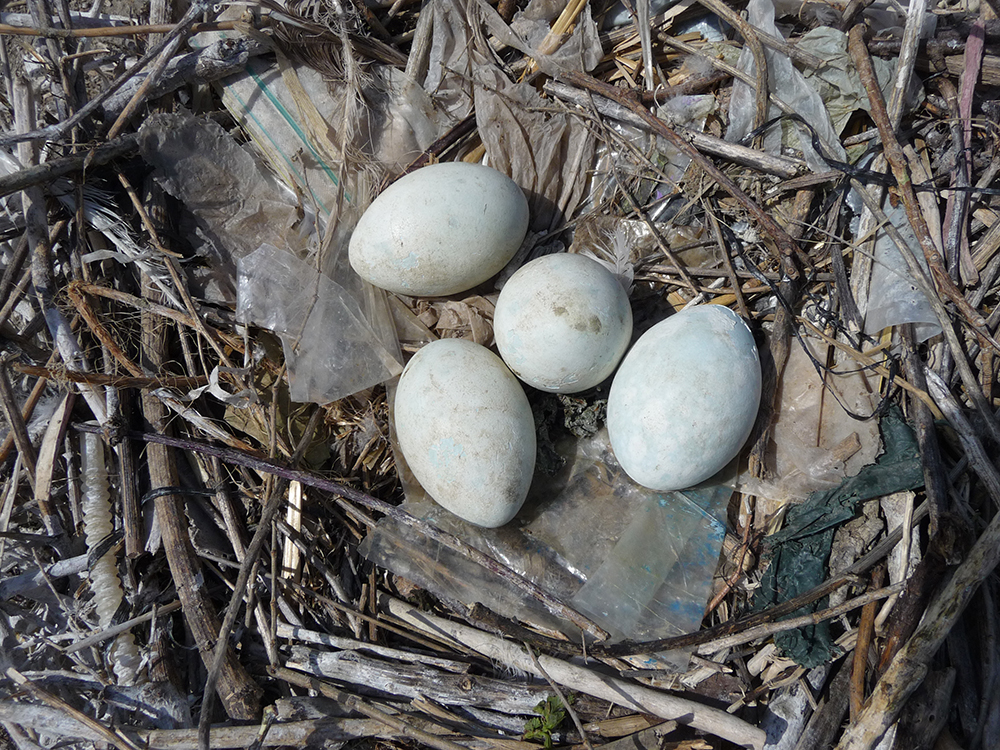 A double-crested cormorant nest made up of some plastic in Hamilton Harbor. Image: Shane de Solla

“For microplastics, the greatest danger is with ingestion because they are small enough to be ingested by the tiniest organisms in the food chain,” said Patricia Corcoran, a professional in microplastics pollution at the University of Western Ontario.

Researchers have found as many as 100 pieces of debris in a single fish, said Chelsea Rochman, the corresponding author on the study and assistant professor in the Department of Ecology and Evolutionary Biology at the University of Toronto. And that debris is working its way up the food chain, according to this study.

Nobody knows how humans are affected by microplastics.

“We don’t really have documentation of microplastics accumulating all the way to the top of the food chain,” Corcoran said. But if we eat fish that have microplastics in them, then we are eating microplastics which may have chemical pollutants absorbed in them, she said. 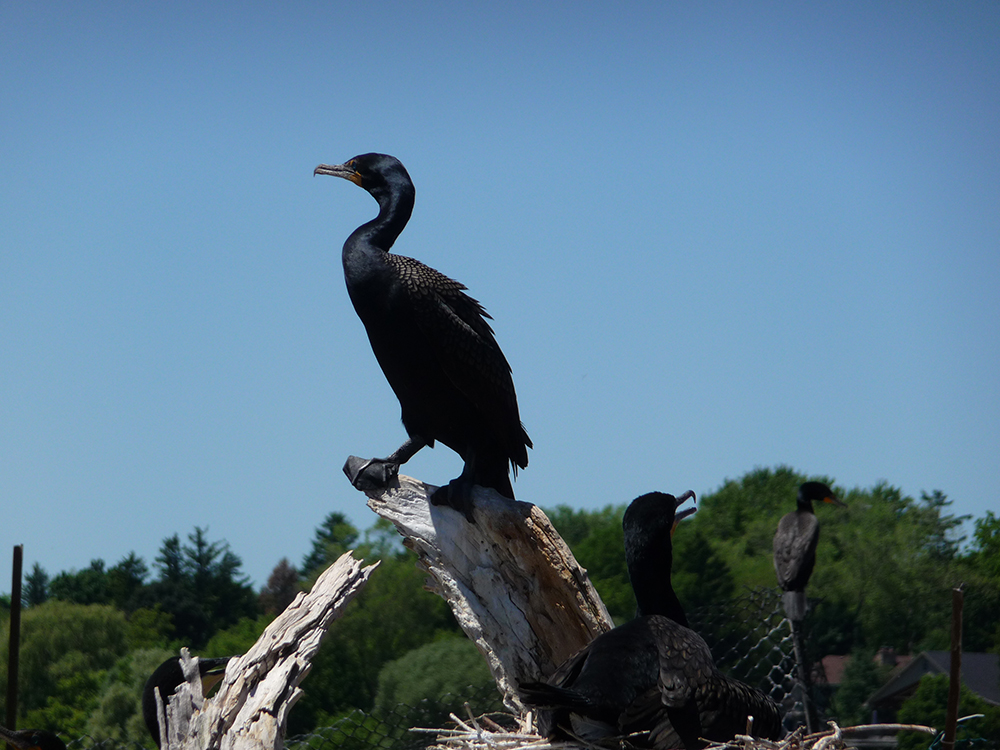 Microplastics also contaminate the drinking water that we pull from the lake, Rochman said.

Brookson hopes that this study will make it harder for people to deny the plastic problem in the Great Lakes.

“The problem is that we as a society have become so reliant on this incredibly useful yet also very damaging material that it has become really hard for us to move away from it,” Brookson said.

What we’re doing is having a real effect on the environment, he said.

“Our goal is to make it more and more of a priority to effectively legislate such that we can help cut the problem off where we are now and hopefully mitigate too much future pollution,” he said.

To read the original article and related Great Lakes Story, follow this link to the Echo website.  http://greatlakesecho.org/2020/02/03/microplastics-are-filling-the-great-lakes-and-birds-bellies/