Why Lake Superior is rising and what it means. Duluth, Minnesota has been identified as a potential refuge for climate migrants who are fleeing from the damaging effects of climate change occurring in their respective hometowns. The city was selected based on qualitative, social criteria that makes it more appealing than other places, but was not deeply examined in terms of environmental impact or in terms of how climate change might be affecting the water level rise of Lake Superior. Ironically, long-term geological processes as well as recent heavy precipitation events linked to climate change, threaten even the most “climate-proof” city in the United States.

The surface of the Great Lakes region is still in the process of bouncing back from the weight of massive glaciers that began retreating near the end of the last ice age 11,000 years ago. These glaciers and ice sheets, which were miles thick, literally pushed the Earth’s crust into its upper mantle. Now, with the glaciers gone, the earth’s surface is rising back upwards, a process known as isostatic rebound. Because of the thick consistency of the earth’s mantle, it will take many thousands of years for the land to return to its original equilibrium level; just as an exercise mat, pushed down, takes some time to return to its original shape, or as a spoon leaves an imprint on jam in a jar.

However, the amount and rate of rise is not uniform across the Great Lakes region; it all depends on the amount of ice that was pushing the land down and how long ago it melted away. For instance, the Hudson Bay area was home to some of the most massive glacial ice sheets, and was the last to see its ice melt away. Thus, the land surface there is rising more than half an inch per year, which sums to over four feet per century. 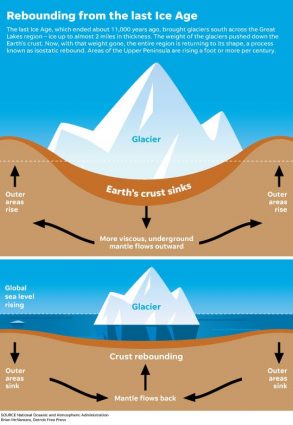 Moreover, rising land in some areas can cause the land to sink elsewhere, creating a sort-of seesaw effect. North America’s Great Lakes lie along the fulcrum of the seesaw: land north of the lakes is bouncing back up from the retreat of Canadian glaciers, causing the land south of the lakes to subside. As a result, residents on the southern shores are seeing water levels rise very slowly over time.

Lake Superior itself is experiencing rising water levels on its southern shorelines while its northern shorelines are experiencing the opposite. In fact, a paper published by Lee and Southam in 1994, which examined water level limits for Lake Superior for the purposes of hydropower water diversion, stated: “Due to these natural changes, the upper regulation limit is now 0.21 m higher at Duluth, Minnesota, and 0.26 m lower at Michipicoten, Ontario, than in 1902. By 2050, these differences will be as much as 0.34 m higher and 0.43 m lower, respectively.” They concluded that the effects of crustal movement should be considered in long term planning, especially with regard to establishing flood levels along Lake Superior’s southwestern shore.

The contribution of isostatic rebound to water levels in the Great Lakes is only a small fraction of the entire lake level rise story. Andrew Gronewold, a professor in the school for environment and sustainability (SEAS) at the University of Michigan, explained to GlacierHub that while glacial isostatic rebound is indeed occurring over the Great Lakes region, it is not the reason why water levels are so high in Lake Superior right now. “Water levels are driven primarily by rainfall that enters the Lake Superior basin, and by the amount of water that leaves through evaporation,” Gronewold said, and “this increase in precipitation is largely the response to climate change across the region.”

Gronewold has been researching how changes in precipitation and evaporation lead to both short and long term changes in water levels in the Great Lakes. He mentioned that as recently as five or six years ago, water levels in the lakes were dangerously low. However, as a result of recent heavy precipitation events, Lake Erie and Lake Ontario just broke their all-time record for high water levels, and that goes back over 100 years. Lake Superior rose one meter in just five years. “It’s important to mention that the rate of change due to glacial isostatic rebound is not nearly as fast as the water level rise by precipitation,” said Gronewold. Researchers believe that rapid transitions between extremely high and low water levels could be the new normal as interactions between the global climate and regional hydrological cycles become more variable with climate change.

Not only has there been an increase in the number of precipitation events, but there has also been an increase in the number of heavy rainstorms. This trend is the result of a warming atmosphere, which can hold more moisture, Gronewold explained. Indeed, for every degree (Celsius) of temperature rise, the atmosphere can hold about seven percent more moisture. The Intergovernmental Panel on Climate Change (IPCC) pointed out that eastern North America is one region especially at risk of seeing the largest increases in heavy precipitation as the climate warms.

According to the IPCC, Earth’s surface warmed an average of approximately one degree C above pre-industrial levels by 2017. This rise might seem small, but the amount of energy that is required to heat the entire surface of the earth by one degree is extremely large. We are already seeing intense sea level rise along the Eastern Coast of the US, worsening wildfires in California, an immense decline in fishery productivity, and the exposure of hundreds of millions of people to climate related risk and poverty. This is forcing millions, especially those in coastal communities, to migrate places that are more climate safe. 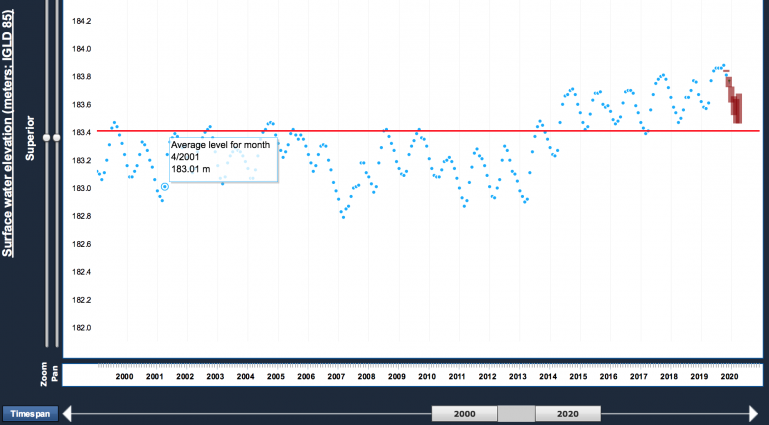 Duluth, a major port city on Lake Superior, was identified among several other cities in the Upper Midwest as a potential climate refuge for those escaping the damaging effects of climate change in their own hometowns. Jesse M. Keenan, a lecturer in architecture at Harvard University, served as the principal investigator in the “Duluth Climigration” (climate migration) project. “We are seeing the northerly migration of flora and fauna, and the idea is that people will follow,” said Keenan.

“No city can be ‘climate proof,’ no one is immune from climate change,” Keenan explained in his lecture to Duluthians this past April, but there are places that are better insulated than others. Right next to Lake Superior, Duluth the “air-conditioned” city, makes a good case for being quite climate proof. Moreover, recent research out of the University of Maryland suggests Duluth may see a similar climate as Toledo, Ohio, a city 550 miles southeast of Duluth, by 2080.

The video above is a lecture given by Dr. Jesse M. Keenan in April of this year, and is geared towards informing Duluthians about why their city would make an outstanding “climigration” refuge.

“What do people look for when they move?,” Keenen proposed to GlacierHub. Duluth boasts urban affordability, a strong health care system, strong primary and higher education systems, and it also displays core infrastructure that would capture mid- and upper-income consumer preferences. Furthermore, the city has excess capacity for new housing and businesses because it is a residual of the rust belt which saw industrial decline and gradual depopulation starting around 1980. “It has been in a long, long population decline, so any measure of additional population resonates,” Keenan explained. Within the past decade, the entire town gained just 56 people. Though his team did not take into account the environmental impact component of migration in their decision, Keenan affirmed, “I do not discount the associated challenges of water management in terms of stormwater management and managed lake levels, but Duluth itself, has qualitative aspects that make it a good ‘refuge.’” 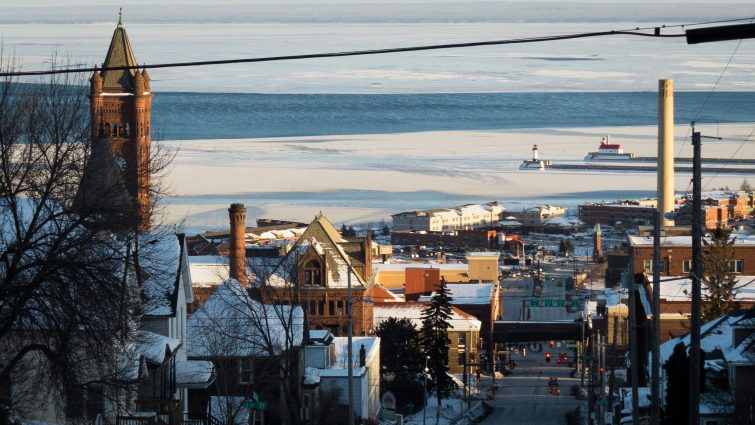 Keenan argued that if refugees were to move there, they should settle in high density housing downtown, rather than expand suburbanization, as it provides an opportunity to revive mass transit and build sustainably. “I think this is the most interesting part of the project, actually, because when people move, land becomes very inundated, and this is a chance to move away from the suburban high carbon footprint and build sustainable high-density housing,” Keenan remarked, “and it could easily be like the brownstones of Brooklyn – very nice and beautiful.”

The important thing to figure out is who will be on the move, which market and demographics they will represent, and what this will mean for the housing lifecycle, the tax base, and for development. Many Floridians currently imperiled by intense storms and sea level rise may choose to relocate here because Lake Superior resembles the ocean. There have been people who have actually relocated to Duluth as a result of Keenan’s research – “They’ve read these papers and have said ‘That’s it, we’re moving to Duluth!’ Keenan said, and “I want to meet these people.” 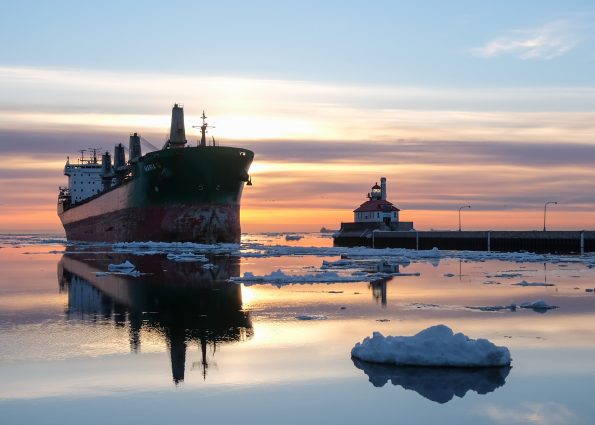 The massive glacial ice sheets that carved the Great Lakes make Duluth a deepwater port. Ocean-going ships can reach it, even though it is situated far inland. (Credit: Sharon Mollerus/Flickr)

When asked whether Duluth might make a good climate refuge, Gronewold explained: “As a citizen of the region, I can say that Duluth is an amazing city and the Upper Midwest is a great place to live, but it’s really hard to untangle all the impacts that climate change might have, not only on water and temperature, but also on the economy.” Duluth’s location on Lake Superior provides a cool climate, fresh potable water, and a stable, deepwater shipping hub favorable for climate migration. But now the Great Lakes, to which Duluth owes so much, are changing as a result of slow geological processes as well as much more rapid climate change.

To read the original article and see related stories, follow this link to the glacierhub.org website.  https://www.boreal.org/articles/new
News