Derek Dasti, owner of Easton Acres Farm in Hornepayne, Ont., shows off some of his strawberry plants after his first season in operation. Photo: Jeff Walters/CBC

The Canadian Shield is not the first place you'd expect to see lush gardens.

But, on the edge of Hornepayne, Ont., smack-dab in the middle of the bush in northwestern Ontario, Derek Dasti is trying out his latest project: farming.

"I was a railroader for almost 20 years as a welder, then I was a maintenance guy at the hospital for 11 years, and I'd been working since I was pretty young, and I decided it was time to do something for myself," Dasti said.

"Thirty years into a pension, and I said, it's time to go and do my own thing. I'd always been talking to one of my co-workers and saying, 'the next thing I'm going to do bud, I'm going farming!'"

Dasti started his own business, Easton Acres Farm, in his backyard at the edge of town. He owns 10 acres surrounding his home, and he wants to start clearing land this winter so he can expand his farm next summer.

This year was Dasti's first summer in business, which he calls a success.

"The reaction around town has been phenomenal. I couldn't meet the demand. It was crazy.," he said, noting he had calls from as far away as Hearst asking about strawberry picking from his 10 beds. 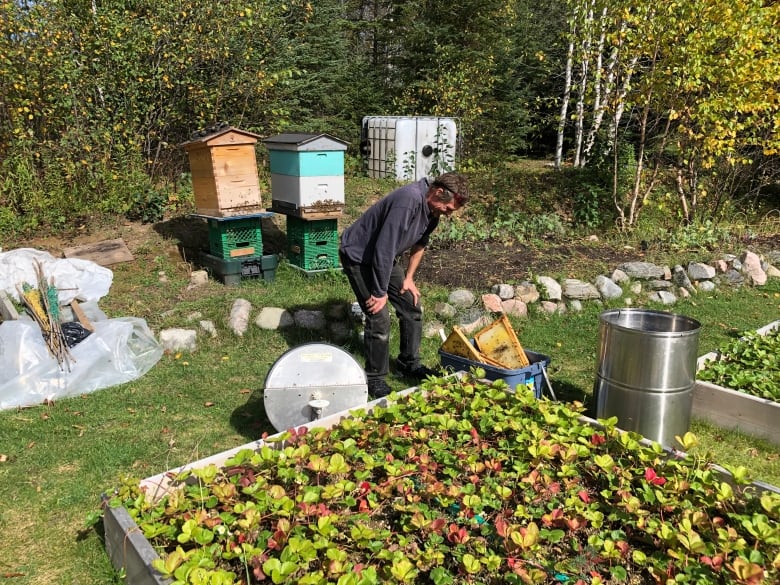 Derek Dasti of Easton Acres Farm watches over the bees cleaning off part of their hives. Dasti also keeps bees to help with pollination for a variety of plants, including strawberries. Photo: Jeff Walters/CBC

"It did surprise me," he said. "The support was just unbelievable."

"This year my berries were good, next year they'll be really good, and the third year, they'll be amazing. It's a time thing," said Dasti, explaining the plants take time to root, mature and produce better fruit.

Growth in the future

Dasti has a variety of strawberries planted, and hopes to lengthen the season for harvesting by having different varieties available through the fall.

He has plans to expand to also include wild blueberries and raspberries too.

Dasti prides himself on the fact he does not use any pesticides on his crops, and is being as environmentally friendly as possible, even building a few beehives to help with pollination.

"I have issues with our fresh produce. Anything that comes across the border has definitely been sprayed with a pesticide, just because of the rules and that," he said.

"There's a definite market for this."

Dasti said this winter, he plans to clear two of the 10 acres he wants to eventually farm. He also plans to experiment with artificial light in his garage, to see if he can extend the growing season.

"Once I think things get really going, I'll be pretty busy. I'm hoping to supply a basket with various vegetables and strawberries. We'll start that on the low scale and start from there."

To read the original article and hear an audio report of this story, follow this link to the CBC Thunder Bay website.  https://www.cbc.ca/news/canada/thunder-bay/hornepayne-easton-acres-farm-1.5332644