Environmental groups have been eagerly waiting to see who Tim Walz appoints to lead key agencies as a signal of how his administration may approach PolyMet, Enbridge and other projects.  Photo:  MinnPost by Greta Kaul

Minnesota’s most influential environmental organizations are often politically aligned with the DFL. But many of those groups aren’t feeling particularly victorious after the DFL’s big victories last week.

That’s because they don’t expect much change when it comes to two of the state’s most fiercely contested natural resources projects: PolyMet’s proposed copper-nickel mine in northeastern Minnesota and the plan to replace an aging Enbridge oil pipeline that enters the state from Canada and North Dakota and ends near Lake Superior.

Several environmental organizations opposing PolyMet and the Enbridge Line 3 project say DFLer Tim Walz, Gov. Mark Dayton’s successor, is unlikely to dramatically change course for the mine or pipeline, even if he supports many of their other causes.

“Right now I’m not seeing any indication that there’s going to be a message to change what’s been going on in any kind of significant way,” said Scott Strand, a senior attorney for the Environmental Law and Policy Center.

The PolyMet project took a leap forward earlier this month when the Department of Natural Resources granted it key environmental permits. The DNR’s long-awaited decision was celebrated by many who see the $1 billion project as a source of jobs, but the plan has been fought tooth-and-nail by some environmentalists worried its waste could pollute Lake Superior and the surrounding watershed.

Dayton has put up some hurdles for the Enbridge project. His Department of Commerce has been vocal in its opposition. He also vetoed a bill that would have authorized the pipeline to move ahead without typical approval from the Public Utilities Commission, though the five-member PUC board — made up of three Democrats, a Republican and a nonpartisan member — approved the project in June anyway. On Monday, the PUC unanimously rejected petitions to reconsider that decision, leading protesters to march to Walz’s new office at the Capitol.

As governor, Walz won’t be able to unilaterally stop either project. But as Strand noted, some state agencies need to approve permits for Enbridge and said more robust opposition from Walz could influence them, even if Walz can’t “preordain” an outcome. (Legal battles over the PUC decision are likely to reach the state Supreme Court, too.) 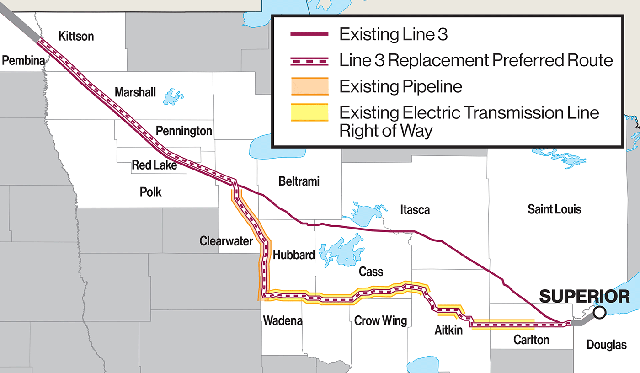 Aaron Klemz, a spokesman for the Minnesota Center for Environmental Advocacy (MCEA), said he believes a new DNR under Walz could restart the environmental review process based on MCEA’s assertion that PolyMet is planning to build a much bigger mine than it has proposed. Dayton has supported PolyMet. That project also needs additional permits before it can open.

Walz maintains PolyMet should move forward if the company’s plan meets state environmental standards. He has a similar stance on the Enbridge Line 3 replacement, but Walz spokeswoman Kayla Castañeda said in an email there “must be meaningful engagement with all the tribes affected by the project,” especially the ones opposed to it. The proposed route for the pipeline doesn’t cross any tribal land, but it would span wild rice waters tribes have rights to, and areas with cultural importance.

“When it comes to a project that could impact our environment, I believe we need to follow the science,” Walz said in a written statement. “If a project meets or exceeds all environmental standards, then it should be permitted. If it does not, it should not.”

Environmental groups have been eagerly waiting to see whom Walz appoints to lead key agencies as a signal of how his administration may approach PolyMet, Enbridge and other projects. Castañeda said Walz’s Cabinet choices are expected to be announced in mid-December.

But many say they’re not holding their breath for commissioners with an environmentalist slant. “There’s nothing that’s been promised on the campaign trail that would suggest that he’s been any different than Dayton has been,” Klemz said.

Tara Houska, campaigns director for Honor the Earth, an organization fighting Enbridge, said Lt. Gov. Peggy Flanagan’s strong opposition to the pipeline has sparked optimism that the Walz administration will follow suit. But she criticized Walz, saying he has not been clear enough in his position on the pipeline and said she hopes Flanagan’s stance and status as a member of the White Earth Nation “translates to action” and isn’t simply “political cover.”

Houska noted Michigan’s incoming Democratic governor, Gretchen Whitmer, has been flatly against replacing an Enbridge pipeline in her state.

Supporters of the Enbridge project in Minnesota say a new pipeline would be safer than the old one and its construction would create jobs in rural Minnesota. Enbridge says the existing pipeline is not operating at full capacity because of safety worries. Opponents worry about spills and other possible environmental problems with a new pipeline, and are urging an end to projects that support fossil fuels amid escalating global temperatures.

A split inside the DFL

The frustration of Minnesota’s environmental groups illustrates their lack of political traction on PolyMet and Enbridge, as well as the split inside the DFL between those favoring economic development through jobs in natural resource industries versus those concerned about potential damage to the environment.

PolyMet has been supported by most prominent Republicans and DFLers, who say the project can be done safely. The company has promised hundreds of jobs, a claim that’s been backed up by some research, and the DNR is satisfied with PolyMet’s pollution-protection measures. The state has also secured financial promises from PolyMet in case of trouble, although some have questioned whether it’s enough money to fix a disaster.

Castañeda took pains to show the concerns of environmental organizations are not sidelined. She said Walz’s administration is reaching out to pro-industry and environmental groups for input to build bridges and garner advice for Cabinet appointees.

For now, the MCEA and other environmental groups will continue their fight to stop Enbridge Line 3 and PolyMet largely with lawsuits, protests and outside lobbying of state government.

Not all environmental groups are discouraged. Margaret Levin, state director for the Sierra Club’s North Star Chapter, struck a hopeful tone when interviewed by MinnPost. Though her chapter has been opposed to the PolyMet and Enbridge projects, she didn’t criticize Walz or other DFLers directly.

Levin said the Walz administration has “potential” to help the state “come together around long-term economic growth and sustainability that will be truly sustainable and clean and equitable.” She also singled out Flanagan’s opposition to Enbridge as positive.

“I think that the governor-elect is a populist and understands and appreciates the power in the grassroots,” Levin said.

To read the original article and read related stories about the environment, follow this link to the MinnPost website.  https://www.minnpost.com/environment/2018/11/why-some-minnesota-environmentalists-arent-more-excited...