A caribou is released after being moved by helicopter. (Supplied/MNRF)

A lot of logistics and planning goes into any move, but a northern Ontario scientist recently took that that planning to a whole new level.

Recently, the Ministry of Natural Resources and Forestry relocated caribou from Michipicoten Island to Slate Islands, by helicopter.

Art Rodgers, a research scientist with the ministry, was in charge of developing the protocol to move the animals and coordinate everyone involved.

"I had not been involved in relocation of animals before," he told CBC.

"We really haven't done too much of that in Ontario in the past."

The caribou were moved as wolves had made their way over to the island and the population of caribou was declining as a result.

Rodgers says he contacted other provinces for advice on the move. He says he eventually organized several groups of people to work on the project, including a wildlife capture company, ministry aircraft staff, a transport aircraft and veterinarians.

He says getting to the islands was the first challenge.

"Lake Superior kind of makes his own weather," he said. "Getting to these islands is sometimes quite difficult."

Once the crews got to the island, they found the caribou, encouraged them to move to an open area and captured them with a net gun from a helicopter.

From there, the animals were restrained and blindfolded and earplugs were put in to relax the animals. 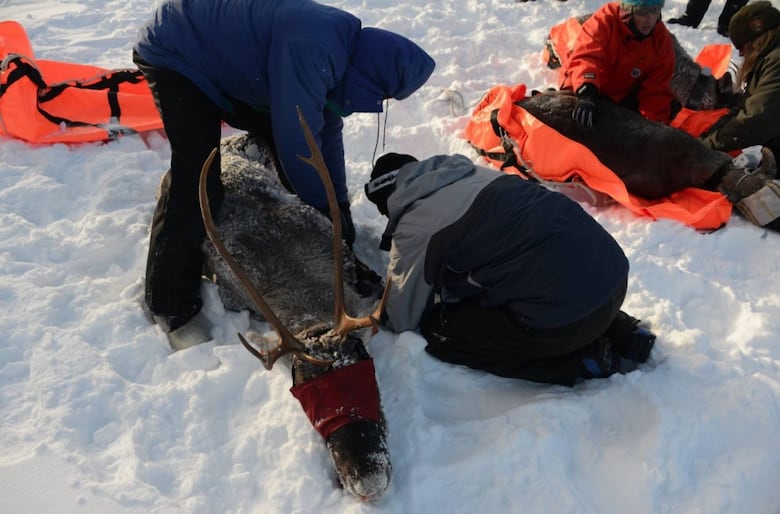 Crews recently moved caribou from one island to another in Lake Superior. (Supplied/MNRF)

"The next step … is veterinarians would apply a mild sedative to calm the animal down further," he said.

"Once you get the blindfold on, it's a little bit like a horse. They tend to settle down. As long as there's not too much noise going on around them, they really do calm down quite quickly."

He says the sedative is given as the animals were moved by air in the helicopter after being placed into a special bag. Rogers says that took about 45 to 60 minutes to move the animals from one island to the other.

"During that trip, we had two veterinarians on board and myself, and we were monitoring the animals all the way, measuring respiration rates, heart rates and body temperature," he said.

"And making sure they didn't come around while they were inside the helicopter, and we didn't have any of that happen either."

Once they land, the caribou were moved outside, released from the bags and given a reversal of the sedative which takes about five minutes to kick in. Rodgers says they stuck around to make sure the caribou wandered away safely.

"Historically, Slate Islands have supported a caribou population up into the hundreds," he said.

"We expect their survival will be very good. We outfitted all of the females with GPS collars and we're checking their movement and activity everyday to make sure that everything is good."
Outdoors