This remote First Nation pays lofty power costs. Forced to use U.S. source, they want to be on Ontario grid Photo: Harvey Powassin lives on Windigo Island, a remote community that's part of Animakee Wa Zhing 37 in northwestern Ontario. Windigo Island has to important electricity from the U.S. For Powassin, that means he has to start putting aside money to ensure he can afford his bills in the winter. (Laura Clementson/CBC)

Despite the approaching dusk, there aren't many lights turned on in Harvey Powassin's home on Windigo Island, a remote community of about 50 people that is part of Animakee Wa Zhing 37 in northwestern Ontario.

As the mercury continues to drop, Powassin is getting ready for the return of winter and the high electricity bills.

"I try to be conscious about it," Powassin said, "but not really a whole lot you can do in the winter time because you gotta keep the house warm for the pipes."

In many ways, the community of Windigo Island, along with the neighbouring First Nation community of Angle Inlet — both located on Lake of the Woods and accessible only by boat or ice road — have fallen through the cracks when it comes to electricity and affordability.

They live on waters that generate cheap power for Ontario and Manitoba, but have to import electricity from the United States, meaning they pay some of the highest electricity prices in Ontario, once the currency exchange rate is factored in.

The Ontario government hands out a lot of money to help residents and businesses with electricity costs — about $6.9 billion this year alone, estimates the Financial Accountability Office. But Windigo Island residents don't see any of that cash. The on-bill subsidies are only for people connected to local electricity distribution systems, a spokesperson with the Ontario Ministry of Energy confirmed.

Manitoba has also taken steps to reduce the cost of electricity to residents, building a transmission line through the traditional lands of Animakee Wa Zhing 37 and other First Nations to export more power to Minnesota — a project that has been in service since June 2020.

But Windigo Island still likely won't get any help for its bills, after the province issued a directive to Manitoba Hydro that prevents the corporation from entering into agreements with Indigenous communities.

It's a unique situation among Indigenous communities in Canada, several experts told CBC News, one they say has been created by historical and ongoing injustices, and that demands action.

Leading up to winter, Powassin said he starts putting money aside to ensure he has enough to cover electricity bills.

"What choice do I have? It's the only company that services the community, so it's just something you gotta live with right now until they find something else."

Powassin said he can afford to pay his own electricity bills because he has a well-paying job as the island's water treatment plant operator. But if that were to stop, Powassin said, he might have to move off the island his family has inhabited for generations.

He's also among the island's few residents who pay their own bills.

The First Nation covers the cost of electricity for most buildings, including 17 residential houses, in part because of the financial burden and also because the hydro meters are split in a way that makes it difficult to divide, said the First Nation's chief, Linda McVicar. 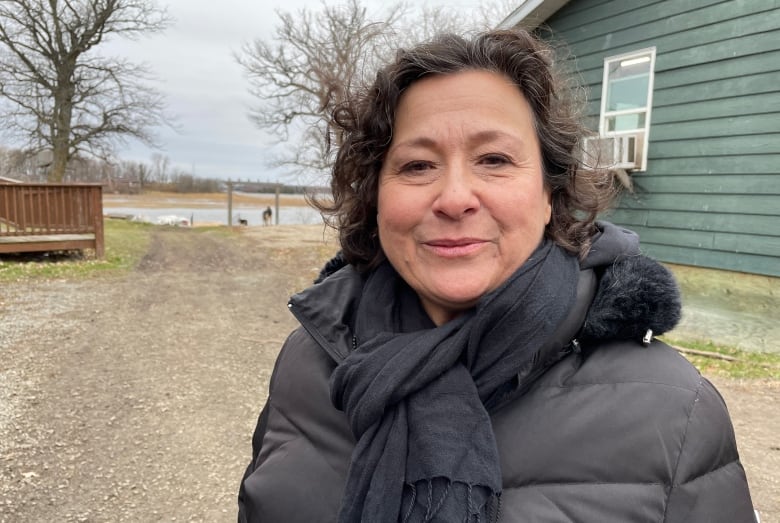 Linda McVicar, chief of Animakee Wa Zhing 37, says the cost of electricity on Windigo Island is becoming too much, and worries one day it won't be affordable for residents to live on the island their families have inhabited for generations. (Laura Clementson/CBC)

But the cost is becoming too much, McVicar added.

While it is difficult to compare electricity prices across Canada because of different power sources and billing methods, that is above the current peak pricing rate at $0.151 Cdn per kilowatt hour and higher than the top-tier electricity cost of $0.103 per kilowatt hour, which are set by the Ontario Energy Board.

The rate is also much higher than what's seen in major cities in the neighbouring hydro-dependent provinces of Manitoba and Quebec, where the average electricity rates are $0.102 and $0.076 per kilowatt hour, respectively.

"We have a [20-year] plan for growth. It's just that how are we gonna be able to do that with the costs," McVicar said.

"Now is the critical point, where I think it's going to be very difficult to be able to stay here. We don't want to see people leave."

After CBC News reached out to Indigenous Services Canada and Ontario's Ministry of Energy, they initiated meetings with McVicar and said they are committed to helping Animakee Wa Zhing, but did not offer solutions, funding or a timeline to address the First Nation's concerns.

Neither government said it would provide subsidies to temporarily support the First Nation with electricity costs. The two governments also did not say if it would ultimately pay for new hydro connections to the island, although the federal government recently put forward millions for other major electricity projects to connect First Nations to the Ontario grid.

"I'm gonna be a 'windy bug' for life … that's what we call ourselves from Windigo," she laughed.

The area around Windigo carries great historical and cultural significance, and was one of the locations where Treaty 3 was signed in 1873.

"Especially the Powassin-Major [families], we've been here since the Treaty was signed, so it's our home," Vanessa said.

Her family will always be here, she said. One of Vanessa's daughters died in 2002 and is buried on the island.

"I have to take care of her too. I'm not gonna leave her," Vanessa said. "My kids are the most important thing in my world. That's why I keep fighting to stay here."

But she's in for a tough battle. While the First Nation covers the cost of her electricity, the problem isn't just the price. It's also the reliability — a key problem for Vanessa, who just started life-saving dialysis treatment. 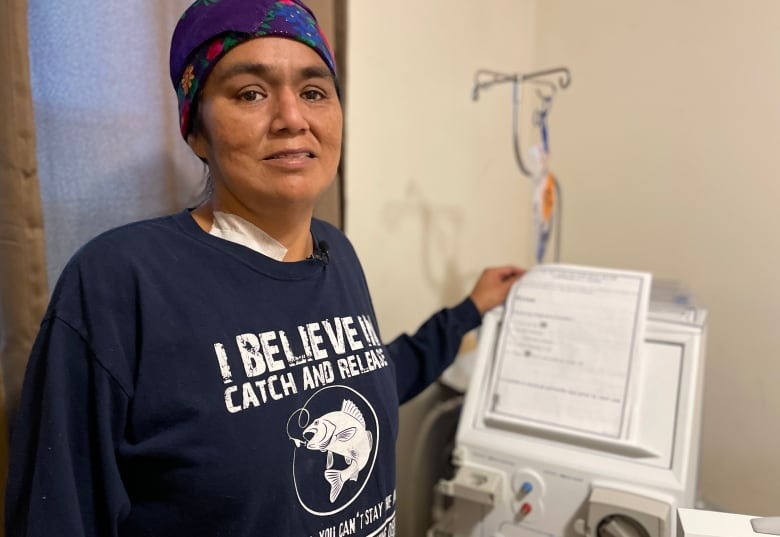 Vanessa Powassin, a resident of Windigo Island, says she relies heavily on electricity because she uses dialysis three times a week. But reliable power is a problem on the island, she adds. (Laura Clementson/CBC)

Vanessa has to get the 3½-hour dialysis treatment three times per week. If the power shuts off, she has just 20 minutes to disconnect before the battery on the dialysis machine runs out.

"Everything goes black … this light [on the machine] will turn red and it flashes [a countdown], and it makes a lot of alarms," said Powassin, describing what happens when there's a power outage.

"It only takes about five to 10 minutes, but sometimes I need help. As soon as the power goes out, [my husband] runs from the school to get over here."

In the first three weeks of her dialysis treatment, Vanessa said, there were two full outages. During one particularly windy period this fall, the power was flickering so frequently that Vanessa said her nurse advised her to wait until the electricity stopped doing that — which ended up taking four days.

"It gives me anxiety a lot, like when there are power outages. I worry I'm not going to get my treatment done that week," she said. 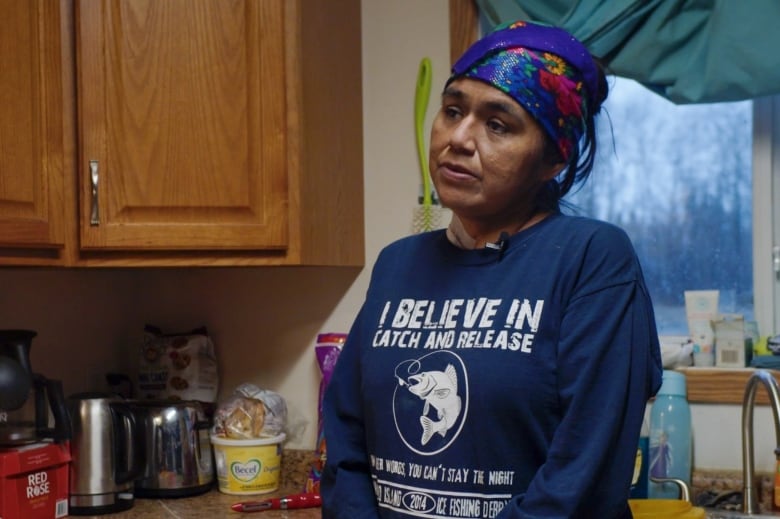 Vanessa Powassin, a former chief of Animakee Wa Zhing, says she probably wouldn't be able to continue living on Windigo Island if she had to pay her own electricity bills, because of the cost. (Marc Doucette/CBC)

With the cost of electricity — heightened by all-electric heating in her house and the dialysis machine — and the lack of Ontario subsidies available, Vanessa said she doesn't know if she'll be able to stay on the island.

"I probably wouldn't be able to afford to live here. It would be a choice between food and travel to get all your food, and electricity."

While the electricity bills keep piling up for Animakee Wa Zhing 37, McVicar said they are trying to make improvements for residents of Windigo Island — including a new water treatment plant, a cultural and wellness centre and new housing units — but those all come with increased energy costs.

Some people who live off reserve are also asking to move back, McVicar added.

"That's a good thing for people to have that ability to come home. But the [bills] are going up, we see that, and so we're kind of at a critical mass."

The First Nation has recently explored different options to bring cheaper power to the island, including several conversations with Hydro One, the largest electricity transmission and distribution provider in Ontario. 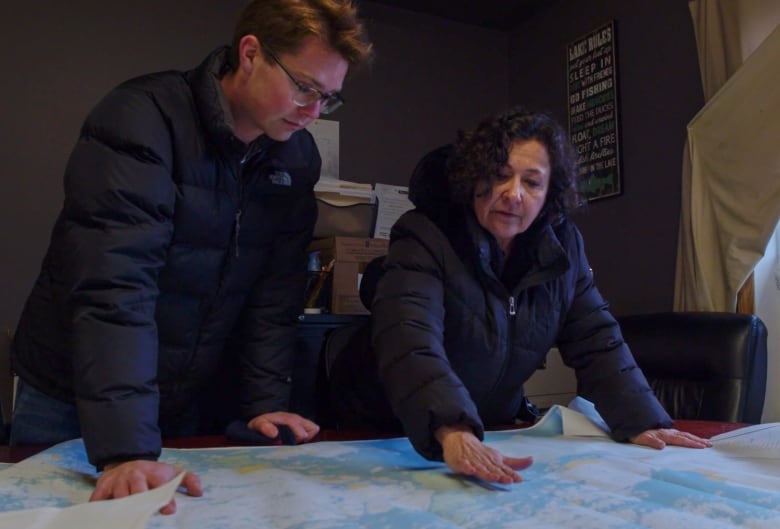 McVicar, chief of Animakee Wa Zhing 37, shows CBC reporter Logan Turner some of the options shared by Hydro One to connect Windigo Island to the Ontario electricity grid. (Marc Doucette/CBC)

Hydro One made some suggestions, including connecting the island to the Ontario grid by submerging transmission lines, at a quoted cost of between $5 million and $10 million, the chief said.

"The conversation kind of just ended, because it's a large cost and who should pay for it?" McVicar said.

"Quite honestly, our capacity for all of this talk and jibber jabber about something to me, that's a basic right … it takes too much of my time."

A unique situation, with many possible solutions

Animakee Wa Zhing is one of two First Nations in the same proverbial boat.

Angle Inlet, a community of about 85 residents, is part of Northwest Angle 33 First Nation. It neighbours Windigo Island and must also import power from Minnesota.

Darlene Comegan, chief of Northwest Angle 33, said they too are looking to bring down their electricity costs, especially high because of the weaker Canadian currency compared to the U.S. dollar.

"I don't think it's fair at all," Comegan said.

"We're just two small communities that don't get looked at … it just feels like we're not worth it to even spend money on." 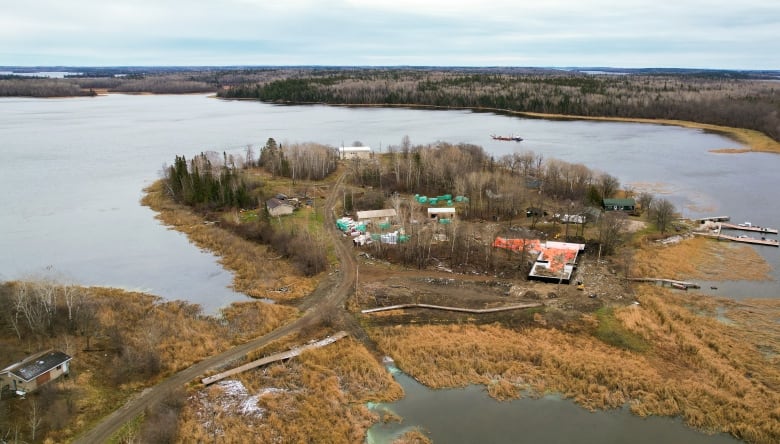 Windigo Island, part of Animakee Wa Zhing 37, is accessible only by boat or ice road on Lake of the Woods. The island is situated at the site where Ontario meets the Manitoba-Minnesota border. (Marc Doucette/CBC)

They all said there are several options to bring down electricity costs, from creating micro-grids using solar or wind power and electricity storage systems on the island, to reducing energy consumption by renovating their buildings to be more energy efficient with the use of high-efficiency wood stoves and heat pumps. There are several provincial and federal programs, as well as non-profits like Indigenous Clean Energy, that could support that transition, the experts agreed.

"It's really up to the community as to how they envision their energy future," said Dave Lovekin, director of the renewables in remote communities program with Pembina Institute, a Canadian energy think-tank.

"The waters that are generating the low-cost hydro that are benefiting others were obtained by flooding traditional areas, and what is the recognition of Indigenous rights that's associated with that?" Parker said to CBC News.

At the end of the day, access to affordable electricity should be a basic right, McVicar said, and governments need to step up to help out.

"We're at a cusp with reconciliation and the recognition that First Nations people deserve all of the opportunities that settlers have had over generations to create economic development," McVicar said.

"For us to be able to grow and sustain, we have to have [affordable hydro] or we will just stay status quo and stagnate."