A group of Thunder Bay artists have a passion for analog photography, and they want to share it with others Photo: Sarah McPherson, one of the two creators of Nefarious, standing in front of the Naanzhe exhibit at Co.Lab gallery in Goods n Co. (Submitted by Sarah McPherson/Nefarious)

At a time when digital photographs have become ubiquitous, a group of Thunder Bay artists are doing their best to keep film photography alive.

Nefarious is a local group on a mission to make it possible for more people to express themselves through analog photography — something that's become more difficult to do as places that develop film have become harder to find, and the price has become more expensive.

Sarah McPherson, who started Nefarious with her partner, Riley Urquhart, said even with the means to afford the service, they've encountered difficulties getting photos processed in the city.

Thunder Bay has only one place left that processes black and white film, and sends colour photos out of town to be developed, she said.

In response, Nefarious collects donations to help local photographs have their film developed. They also hold workshops for photographers who shoot with film, all with the aim of generating a strong environment for the art to thrive. 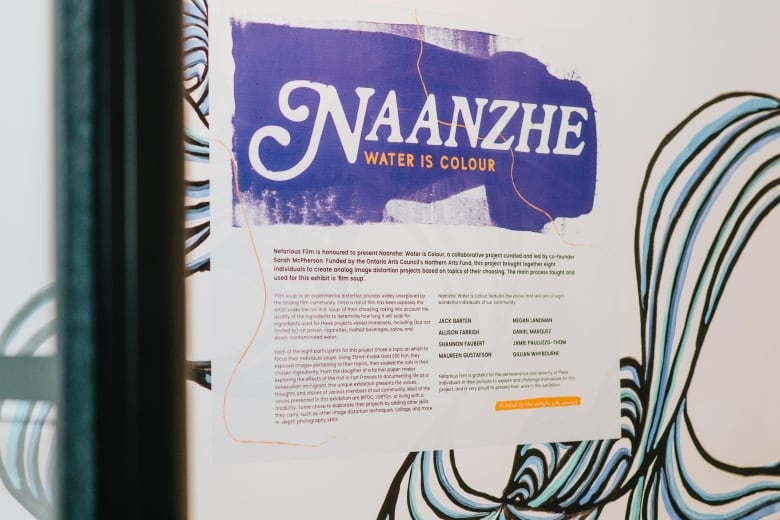 The Naanzhe: Water is Colour exhibit at Co.Lab gallery in Goods & Co. (Submitted by Sarah McPherson/Nefarious)

Nefarious also recently received a grant from the Ontario Arts Council that allowed them to display the work of nine photographers. The artists all identify as either BIPOC, LGBTQ+, or a person with a disability.

The project is called Naanzhe: Water is Colour, and it highlights the crucial nature of water.

Each individual's photos were developed in a process called "film soup." This process includes a concoction applied to the film either before you take the photos or after, when you are developing the photos in liquid in a dark room.

"You can either soup it before you shoot it or soup it after. I find it easier to do it after because it doesn't stick in the camera and makes all kinds of complications there," Sarah McPherson said.

When McPherson soaked her own photographs for the exhibit, she used water that held significance.

McPherson, who has ties to Couchiching First Nation, chose to display photos that tell a story about the impact on the land and water of pollution from the former Fort Frances pulp and paper mill.

She used contaminated water from Frog Creek as her "soup" to develop her film in, she explained.

"There was one elder that I spoke with and he said, the water spirits don't dance on Frog Creek anymore, its very dull when you look at it. He is absolutely right. You look at that water and it's just not the same," McPherson said.

Maureen Gustafson, whose work is also displayed in the exhibit, made the Fort Frances pulp and paper mill her focus as well. She grew up in Fort Frances seeing, firsthand, the effects of the mill on her family and the land around her, she said. 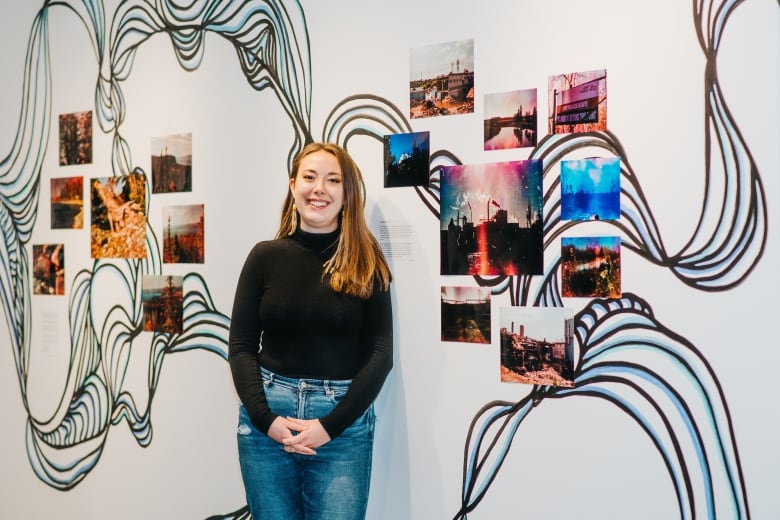 Maureen Gustafson standing with her work inspired by her family and community connection to the Fort Frances pulp and paper mill. (Submitted by Sarah McPherson/Nefarious)

Gustafson, who is from Couchiching First Nation said she has a complex relationship with the mill because her father worked there for over 35 years of his life. She acknowledges the privileges she had because of the financial stability as well as the hard work her father did to provide for them.

On the other hand, she said she witnessed the negative impact pollution from the mill had on her community and family.

She can pinpoint memories of seeing pollution physically invading the town she grew up in, she said.

"I remember driving through town as a little girl and being like, dad what's that cloud of green, yellow smoke coming out of the mill? It turns out it was chlorine gas," Gustafson said.

She has used this project as a way to process the emotions surrounding history, she said, and was able to creatively unpack the thoughts and feelings as she worked on the photographs. Gustafson said she also appreciates the comments received from those viewing her work, and story.

"It felt very validating because now that I have shared the art, and heard peoples' feedback on it. They're saying they understand where I was coming from and that the ideas that I have spoken about and captured through the photos — and that resonates with them," Gustafson said.

The Naanzhe: Water is Colour exhibit is open for viewing until November 16th at Co.Lab Gallery in Goods & Co in Thunder Bay.