Photo: Before, during, and after the Stairway Portage replacement project. (All photos courtesy Willie Bittner/Great Lakes Trailbuilders)

A heavily used portage in the northeastern section of the Boundary Waters Canoe Area Wilderness underwent a major renovation this summer. The Stairway Portage, connecting Rose and Duncan Lakes, has employed some form of wooden steps since the 1930s. The famous wooden steps were recently replaced by a stone staircase, built by a professional trail builder and a team of five apprentices. To comply with wilderness area rules, no power tools or machines could be used.

The project was completed with funds from the Great American Outdoors Act, signed by President Joe Biden in August 2020. It was part of a $260,000 project on the Superior National Forest funded by the legislation to repair and improve recreational trails. In addition to lead trail builder Willie Bittner, a crew of five workers with the nonprofit Conservation Corps of Minnesota and Iowa assisted. Putting in more than 2,000 hours of labor, they did a lot of hard work and heavy lifting, and learned unique skills.

Bittner contracted for the project through his business, Great Lakes Trailbuilders, which he has operated since 2008. He says working in the wilderness presented many kinds of challenges. No power tools, or even a wheelbarrow, were allowed. Traditional tools and methods were the rule.

“This meant every stone had to be split with hand tools,” he said. “I truly enjoy this type of work, but it is challenging and takes time.”

They cut all the rock from nearby outcrops. Each block could weigh up to 200 lbs, and were moved from source to site by manual hoists and lowering on sleds or belay. The team split them into usable pieces with a painstaking and laborious method.

“What that looks like is one person holds a rifting hammer on the stone and another person swings a sledge hammer and hits the rifting hammer,” Bittner said. “This motion continues, moving back and forth across the stone in the desired location of the break, until the stone splits in half. Even with precise work the stone still can split incorrectly and then you need to start the process again.” 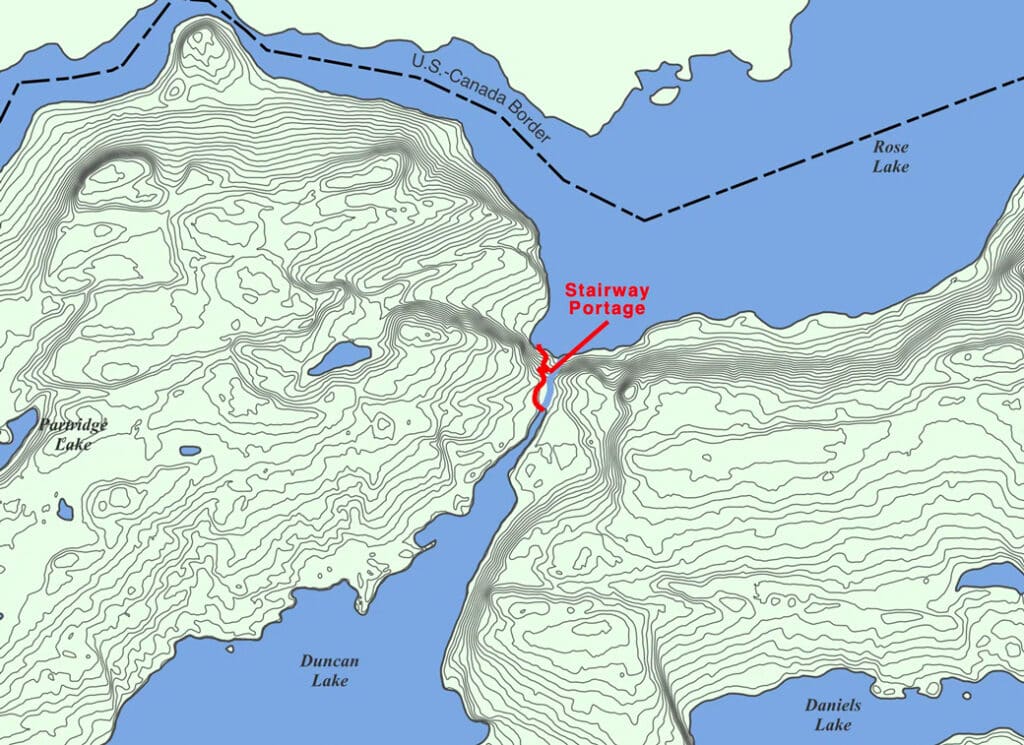 Stairway Portage climbs about 120 feet in elevation over less than 80 rods in length. Most of that is steeply uphill, from Rose to Duncan. During the Great Depression, a crew of Civilian Conservation Corps used logs to create the first set of steps at the site. In its most recent iteration, the portage had two sets of stairs, each with more than 90 steps.

Wood has not worked well, though. It requires frequent maintenance and replacement. The wooden steps of Stairway Portage have been replaced three times in the past 30 years. That won’t be the case with the new stairs. Bittner carefully placed each stone on a base of one-and-a-half inches of crushed stone.

“Once the stone is fully set it should not move at all,” he said. “The rock will be set for a lifetime.”

The crushed rock essential for the stable foundations was also produced on site, by hand. They found smaller stones and took turns swinging a 10 lb sledgehammer, which the crew nicknamed “The Persuader.” The wilderness’s challenges for the workers wasn’t limited to the hand tools and traditional methods. They also had to keep a careful eye on the weather, and even wildlife, and reduce their environmental impact as much as possible.

Then there was the very popularity of the wilderness and that particular portage. The crew kept the trail open the entire time they were building, building the new stone steps next to the existing wooden stairs. But managing this definitely added to the complexity.

“One day we had over 100 people come through and had to assist each group moving through the worksite as large sections of the staircase were missing,” Bittner said.

The crew wrapped up work in early July, packed their canoes full of tools and gear, and paddled out of the wilderness. Since then, countless feet have already found their way up and down the stairs — and countless more are to come.

To read this original story and more news, follow this link to the Quetico Superior Wilderness News website.