How a small beetle is devastating Minnesota's tamarack trees Photo: An eastern larch beetle crawls on Eric Otto's hand. Otto is a forest health specialist with the Minnesota Department of Natural Resources

Judging by the view from a gravel road north of Remer, Minnesota, the forest is fine. Maybe some dry patches in spots, sure. But nothing that would grab your attention as you drive by.

However, the view from above gives a better picture of the damage being done to Minnesota's tamarack trees in the past few decades. Among an otherwise green, healthy forest there are unmistakable patches of brown, dead trees.

The culprit? The eastern larch beetle.

"It's about the size of a grain of rice," said Eric Otto, a forest health specialist for the Minnesota Department of Natural Resources, as he let it crawl on his hand.

The eastern larch beetle is not listed as invasive, and historically it has not presented a problem. The beetles bore into tamarack trees in the spring, tunneling their way through and making galleries in which they lay their larvae. The larvae then essentially eat the part of the tree which moves nutrients through the tamarack.

Otto says usually the beetle attacks trees which are already damaged or stressed from events like drought or flooding. But now he says the beetles are infesting healthy trees, too.

"It's just kind of going through the whole tamarack resource here in Minnesota and doesn't really seem to be slowing down," he said.

From 2001 to 2021, the DNR says the eastern larch beetle has impacted 60% of Minnesota's tamarack forest, or 816,833 acres, mainly in northwest and north central Minnesota.

"It's probably one of the largest forest health issues in the state right now, in regard to the amount of acres it impacts," Otto said. 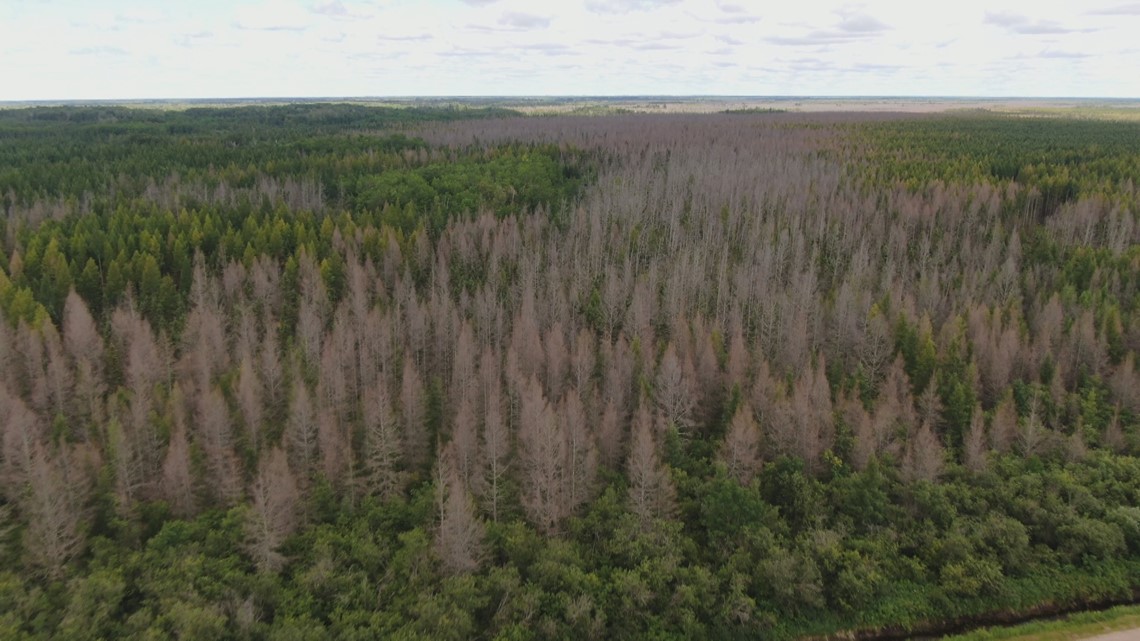 Credit: KARE -  A section of dead tamarack trees north of Remer, Minnesota. The DNR says 60% of the state's tamarack forests have been impacted by the eastern larch beetle.

It's a relatively new problem, with the widespread damage happening just within the last 20 years or so. The reason? The DNR points to the state's warming winters, due to climate change.

"So, you have a longer growing season and the beetles are now able to have two generations [of offspring]. You're having more beetles attack trees," Otto said.

"If you're not getting those temperatures, those beetles can then survive the winter," Otto said.

More beetles which live longer: A problem that's killing trees faster than can be managed.

"It's just strength in numbers," Otto said. "Basically, right now it's trying to stay on top of the problem."

Otto says it's not as easy as just killing the beetles. He says using insecticide is not practical, citing the large number of trees in the forests and potential of harming other species nearby.

Otto says right now the research on this problem is just trying to catch up with how quickly the beetle is causing damage.