Canada's great expanse of boreal forest is changing due to climate change. But not all hope is lost Photo: The boreal forest stretches across Canada, providing habitat for a number of birds and other wildlife. (Supplied by Claire Farrell)

It's the world's largest forest of least disturbance. A stretch of trees sweeping around the globe, accounting for a third of the Earth's forested area.

We're talking about the boreal forest. The planet's coldest forest – a massive store for carbon accumulated over thousands of years and a thriving ecosystem for plants and animals.

In Canada, over 300 million hectares of boreal forest stretches from Yukon all the way through the northern half of the provinces, east towards Newfoundland. The boreal forest is home to half the nation's species of birds, and 3.7 million people.

As our climate changes, this great expanse of cold forest is getting warmer. Average temperatures across the Prairies are 1.9C warmer since the mid-20th century, according to Environment and Climate Change Canada.

Winters are getting shorter and milder overall. Summers are getting hotter with not enough moisture to compensate for the heat. Though some of these changes may seem small, they have big impacts on our local ecosystems, including the boreal forest.

So what will happen to this beacon of Canadian wilderness as our climate continues to change? Will it survive?

Scientists say we are already seeing a shift.

As summer weather warms, pests, wildfire risk and changing precipitation could cause parts of our southernmost boreal forests to die off - while the northern reaches expand into the warming Arctic. Meteorologist Christy Climenhaga explains.

Change is nothing new for the boreal forest. It is under constant pressure from natural disturbances – things like fire and insects – that can help the forest renew itself and become more resilient.

But what happens when these disturbances happen more often, when they start to become the new normal?

That's the lens we are looking through as we continue to see our climate changing at a rapid rate.

"If we think about drought, fire, insects and disease, this large tract is contending with all of these threats all the time. But under climate change at least some of these threats are going to become more severe," says Janice Cooke, a professor of biological sciences at the University of Alberta.

When the mercury climbs, evaporation happens more readily and plants lose water at a high rate through transpiration. When it is not replaced, we start to get into moisture deficits. And the longer those deficits last, the more stress they put on our plants.

"When trees are faced with a lack of water, it's pretty serious. They close their pores on their leaves and they try to hold out," says Cooke.

By trying to conserve water, they are not gaining sugars or resources they need to grow.

Cooke says as growth is stunted, the trees also lose a bit of their capacity to remove carbon dioxide from the atmosphere, which starts to turn into a vicious cycle.

"We know those elevated temperatures create more drought. It's a dangerous feedback loop." 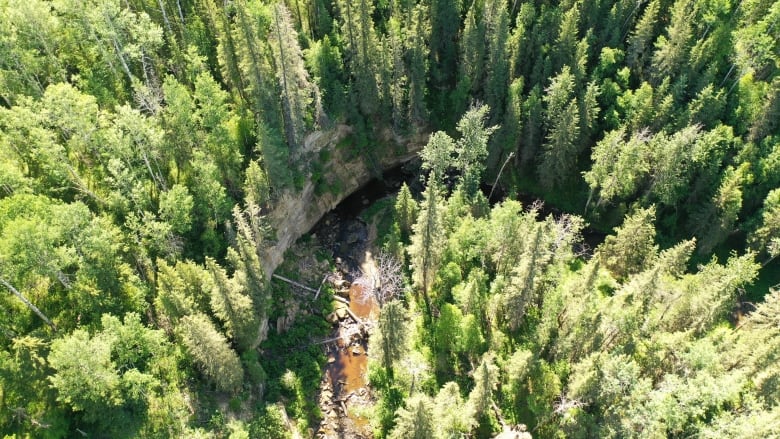 Water stress could affect growth along the southern edge of the boreal forest with climate change. (David Bajer/CBC)

The boreal and the Prairies

Although you may picture a skyline of endless grassland, the boreal forest covers over half of our Prairie provinces.

In Alberta and Saskatchewan, the northern half of both provinces is rooted in the boreal, and in Manitoba it stretches even further south, covering three quarters of the province.

But the health of that forest is already changing in the Prairies.

"The big impacts we're seeing are in northern Alberta, where we've had frequent severe droughts going back to 2002," he says.

Hogg says the 2002 drought meant major tree loss in the aspen parkland and southern boreal between Edmonton and Saskatoon. But recent droughts are extending that stress northward.

"What we've seen more recently is some other parts in places near Peace River, northwestern Alberta, and even up into the Northwest Territories, seen similar things happening … so the mortality of aspens have gone further than we ever expected." 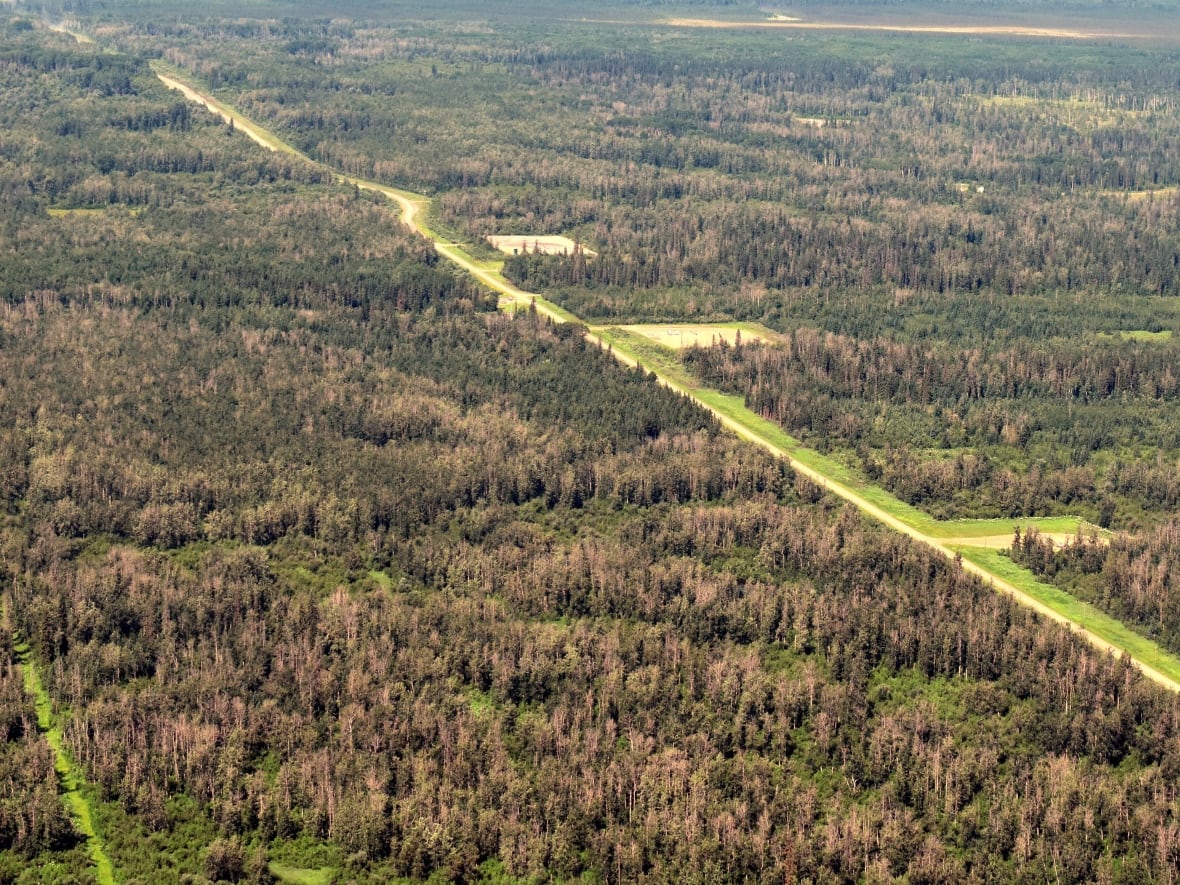 An aerial view of the browning of the forests near Dunvegan Alta. in 2017. ( Devin Letourneau)

According to Diana Stralberg, a research scientist at the Northern Forestry Centre with Natural Resources Canada, these stressors could lead to a shift in the forest to more of a prairie grassland system.

"When you have a fire followed by drought, where the seeds or seedlings don't survive and then they get hit again by a fire, you can have a risk that can result in a lack of forest regeneration."

Stralberg says as we see die-off in Alberta's parkland and southern boreal regions, we may see the forest shift northward. 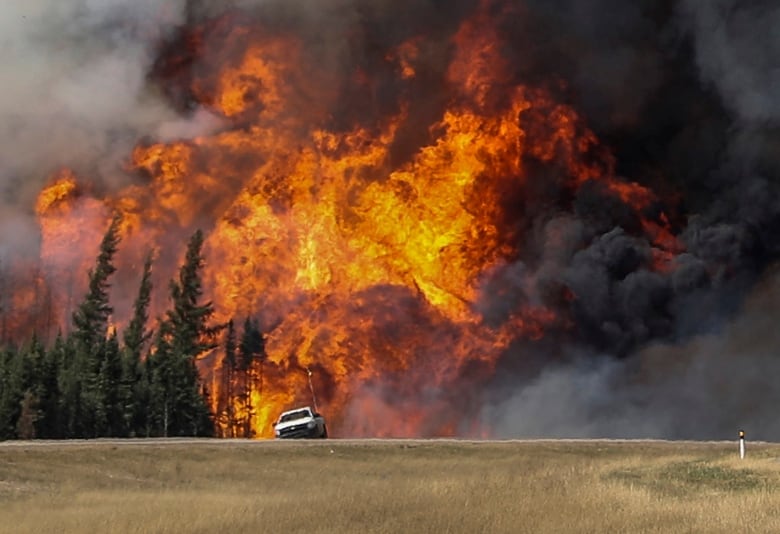 Smoke and flames from the wildfires erupt behind a car on the highway near Fort McMurray, Alberta, Canada, May 7, 2016. According to Natural Resources Canada, climate change could potentially double the amount of northern boreal forest burned by 2100 compared to recent decades. (Mark Blinch/Reuters)

That shift of an ecosystem is no small feat, but it is something that more scientists are seeing.

Logan Berner, an assistant research professor at Northern Arizona University, has been studying the state of the global boreal region.

"There is emerging evidence that as the climate continues to warm, the boreal might shift northward," he says.

This shift would mean an expansion of boreal trees and shrubs into Arctic and alpine tundra, and potentially a contraction of the forest along the southern margins, according to Berner.

In his research, Berner studies tree browning and greening – basically, where growth is increasing, and where it is decreasing.

Berner looked at a number of sites within the boreal forest between 1985 and 2019 to see how growth trends changed. He says that they saw increased greening at the northern edge of the forest. 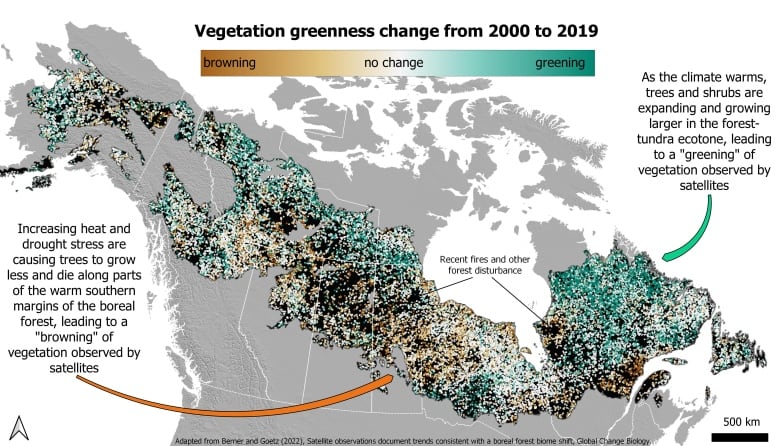 "We think that this is primarily due to higher temperatures, making it possible for trees and shrubs to grow larger and expand their footprint and extend along the forest."

Berner says that in contrast to the northern greening, there were significant declines in vegetation gradients across parts of the southern boreal forest in North America and Eurasia.

"These are kind of early indications that a … shift could be occurring."

But even as trees begin to populate further north, according to Stralberg, it may not make up for the habitat lost in the south.

"You can lose forest a lot faster than it can grow and provide habitat for wildlife. So if you lose an older forest here in the south, you don't really have the opportunity to make that up really very soon."

Stralberg says that means a lot of species that are depending on older mature forests, especially coniferous forests, could struggle.

"As we have more open woodlands and more grassland conditions, then you could see different species coming in. But the fact is that these things are happening so quickly that it's really easy to have loss, especially when you compound with all the other human activities."

Bugs make up another piece of the boreal climate puzzle as we continue to see warming.

As trees struggle with the lack of water it could mean openings for insects, says Jennifer Klutsch, a research scientist with Natural Resources Canada and a forest entomologist.

"Drought stress can lead to those trees not being very well defended against not just native insects and pathogens, but also range expansions such as mountain pine beetle" she says. "That can lead to greater outbreaks, frequency and severity." 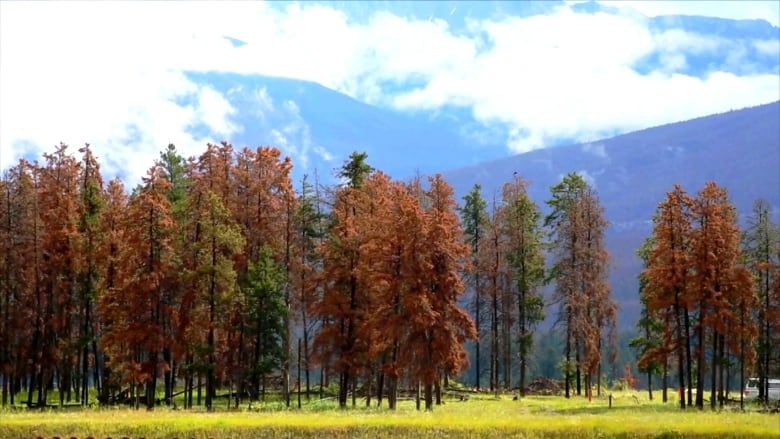 The green forests in and around Jasper National Park are increasingly marred by red, rusty-coloured trees, a sign that the mountain pine beetle has devastated the areas. (Alex Zabjek/CBC)

It also comes down to timing, Klutsch says. Insects, with their shorter life cycles, can respond more quickly to changes in temperature and moisture than trees can.

"They can build up populations and trees are not really able to adapt to this new disturbance regime that's coming their way."

And with warmer winters, bug populations could grow.

"If we don't get the cold winters that we kind of expect in the boreal, then that can lead to bark beetle populations maintaining because of that lack of winter mortality events."

Is it too late?

Well, here is the glimmer of hope.

While we are clearly seeing changes in our boreal region, changes can still be made.

"I think that to some degree there is some inevitability that we are on this trajectory of warming that we have to respond to and adapt to," says Stralberg. "I think to a certain extent we can reduce the damage."

She says there is potential in looking at the landscape, finding the areas that are more resilient, and trying to protect or conserve them.

"Areas that have larger peatland complexes and more interfaces between the upland forests and the peatlands, I think there you have more potential to really keep that water on the landscape," she says.

According to Stralberg, small-scale changes in topography at specific locations where you can have a little bit of shading and protection from direct sun, and the ability for water to be maintained, has potential as well.

Cooke agrees that there is still time to act to protect this vital ecosystem.

"Is it ever too late to do something better? I would say no. We can always try to do better and hope that that's going to have an effect, but we can never wind back the clock."

To read this original story and more news, follow this link to the CBC News website.
News, Outdoors