After a two-year hiatus brought on by the COVID-19 pandemic, public events celebrating National Indigenous Peoples Day were back with enthusiasm in northwestern Ontario.

In Fort William First Nation, a powwow was held on Anemki Wajiw on Tuesday afternoon.

John Gagnon, an elder from Aroland First Nation who works at Dennis Franklin Cromarty High School in Thunder Bay, tended to the sacred fire and had a wellness tent on site.

He said it was important to have the powwow after in-person gatherings were stopped due to the pandemic.

"Today, you could feel the energy today. The people are so happy to be here. Everybody is hugging each other, shaking hands, coming to the sacred fire, coming to give thanks to the Creator for allowing us back on the mountain," Gagnon said. The celebration in Kenora, Ont., of National Indigenous Peoples Day didn't disappoint. Organizers expected at least 1,000 people to come out for the events Tuesday. (Hayley Schwartz/CBC)
The day started with a sunrise ceremony, followed by the opening ceremony and grand entry for the powwow in the early afternoon. A feast was scheduled for later in the day, before the powwow concludes in the evening.

He said that even though he feels a bit nervous when dancing, it's something he enjoys.

"I feel happy. I like to do it because I was born Native and I like celebrating my culture. That's why I like dancing," Tanner said. "It's a part of me."

In Kenora, as many as 2,000 people were expected to come together to celebrate National Indigenous Peoples Day at the Kenora Chiefs Advisory's youth and family wellness camp.

"We're very excited for how this event has grown," said Abbie Siroishka, communications lead for the advisory. "It really started off with us just looking at planning a small celebration for the communities we serve and looking at just doing some smaller events on the property.

"The more that we reached out to people, and the more we connected with the community, the more people wanted to be involved," she said. "What started out as a small, little event has grown into probably the largest event we've ever hosted." 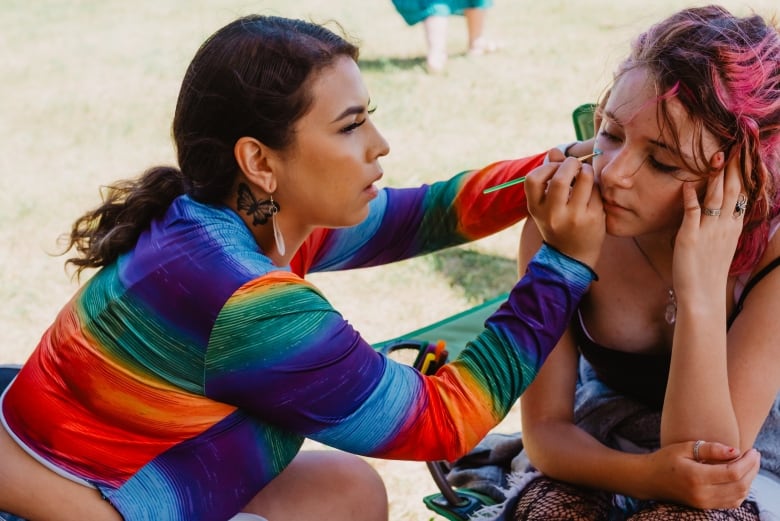 Harmony Scott, left, does makeup for Syd Tacknyk as part of the celebrations for National Indigenous Peoples Day in Kenora on Tuesday. (Hayley Schwartz/CBC)

Siroishka said local schools and school boards are sending out as many as 1,000 students on buses.

"We really hope the youth will gain exposure and knowledge, and an understanding of what our camp has to offer, but also to go out and celebrate the culture, celebrate the history and coming together as a community."

This piece is part of CBC Thunder Bay's special National Indigenous Peoples Day coverage Mino Bimaadiziwin — The Good Life. You can find all of our coverage here.