Flooding and high water in northwestern Ontario have displaced people from their homes, washed out roads, and caused property damage.

Late last week, Kenora municipal officials issued an evacuation order for residents living in the Black Sturgeon Lake area in the northeastern portion of the city.

Kenora Mayor Dan Reynard on Monday morning said water levels are continuing to rise and is expected stay at high levels for the forseeable future.

"Traditionally, it flows out into the Winnipeg River. Because the river is so high right now, the water has nowhere to go," he said. "The water continues to rise in this area. We have roads that, as of [Sunday] evening, in some places are between 24 to 30 inches under water ... That area is just totally impassible."

Northwestern Ontario is one of several regions across Canada to be hit hard by spring flooding. Emergency alerts and evacuation notices have been issued in the Northwest Territories, Alberta, Saskatchewan and Manitoba.

The city closed road access for much of that area on Friday evening. Reynard said emergency vehicles can't access those roads, but added some people can still reach their properties by boat.

An evacuation centre had been set up at the Kenora Recreation Centre, but Reynard said nobody has utilized it.

"That tells us that people have either hunkered down at home and are protecting, or they're with family and friends within the community," he said.

The flooding and high water has caused issues on several roadways across the region, with multiple washouts and highway closures reported.

Near Thunder Bay, Mary Anne Harris and her family spent much of the weekend cleaning up after an accumulation of lake ice smashed through her sauna and boathouse, pushing the buildings off their foundation and splintering the structures.

Harris, whose family has owned the property on Hawkeye Lake since the 1950s, said the conditions this spring are unprecedented.

"It's unsettling to see how things have changed. We've had the water come up, but never, never to this height. Everybody has lost docks and everything is floating around."

Harris said she has also dealt with flooding in the basement of the main house.

"Somebody really ticked off Mother Nature this year," she said. 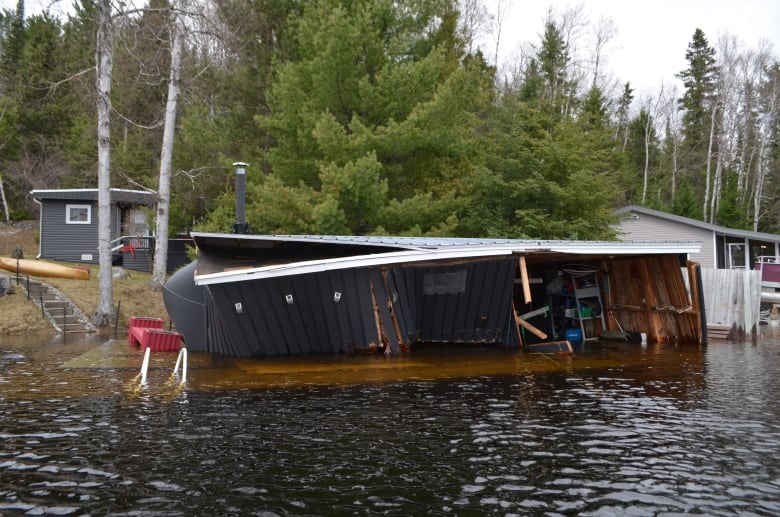