While much of northern Ontario is preoccupied with high water levels and flooding risks, First Nations emergency management professionals and organizations gathered in Thunder Bay, Ont., in preparation for the upcoming wildfire season.

The inaugural "After Action Responders Forum," hosted by the Northern Ontario Emergency Management Working Group, was designed to give First Nations and people working in emergency management a chance to share experiences, challenges and best practices from previous years.

"We wanted to provide the communities a voice, to give them a platform where they could tell their stories … and how it is that their experiences can assist us in going forward and providing community support," said Darrin Spence, chair of the emergency management working group.

It was an important opportunity for different communities, Spence said, especially as climate change is expected to result in more intense and more frequent weather events that will disproportionately affect northern First Nations and communities.

The conference also came on the heels of a record wildfire season — with more hectares of land burned in Ontario in 2021 that in any other year in history and over 3,000 people forced from their homes, many of them from remote First Nations in the northwest.

"It's always a traumatic event to be displaced from the community. There are always social issues, dealing with places that are not known to them, places that are culturally unfamiliar to them … so it's something that we want to help communities with," said Spence.

It's also why the working group is looking at a model that will see First Nations hosting other First Nations in the event of an emergency, he said, a priority for many chiefs and community leaders in the region.

"Where we have a familiar face, we have people who speak the language, who know the culture, who understand where they're coming from and who they are. That's important," Spence added. 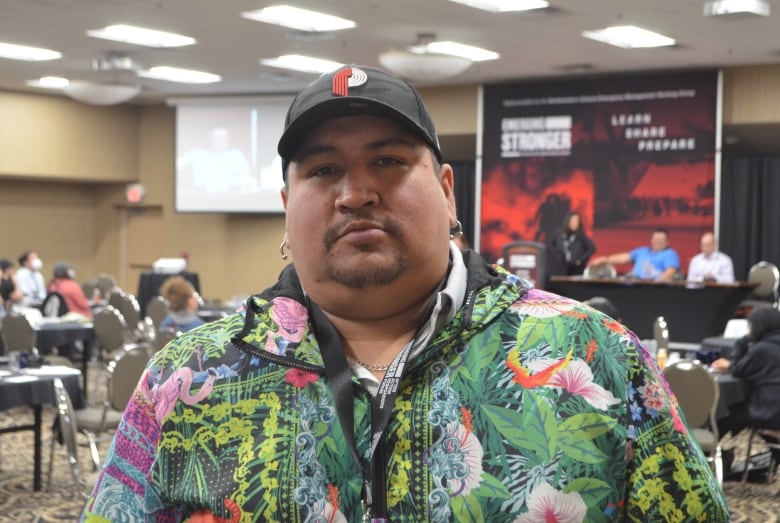 Greg Meeches, who helped with the partial evacuation of Wabaseemoong Independent Nations during the 2021 wildfire season, says it was valuable to learn from the experiences of other First Nations in northern Ontario forced to evacuate last year. (Logan Turner/CBC)

That was something Greg Meeches was able to help secure for some residents of Wabaseemoong Independent Nations in Treaty 3, which was forced to carry out a partial evacuation due to heavy smoke from nearby forest fires.

Meeches, who works in Wabaseemoong, reached out to his home community Long Plain First Nation in Treaty 1, about 110 kilometres west of Winnipeg, and arranged to have rooms prepared for some of the evacuees.

"We had chief and council meet the evacuees and assured them that they were safe there, and that they would be treated like their own," said Meeches, adding there is now an established relationship between the two communities in case they need to evacuate again.

It is also important for First Nations to be prepared to host evacuees after an emergency, said Derek Maud, a former chief and now the community emergency management coordinator for Lac Seul First Nation, which hosted dozens of evacuees during the 2021 wildfire season.

He said the First Nation at times received just 24 to 48 hours notice prior to people arriving in Lac Seul, so it was important they had volunteers trained and preparations made for food and shelter. It's something the First Nation has incorporated into their emergency preparedness plan. 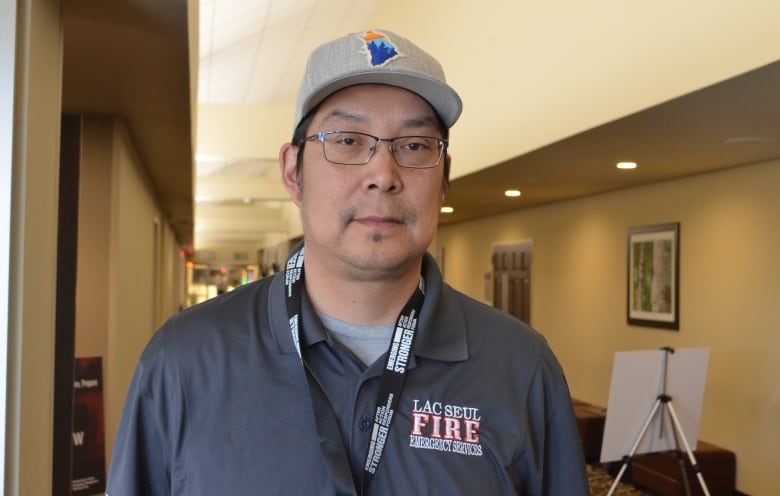 While the conference was helpful to talk about the upcoming wildfire season, Maud added it was an important networking opportunity, given that the position of community emergency management coordinator is a relatively new one for First Nations.

"Seeing what other people are doing, and what I can incorporate into my community — because we all share the same daily situations, so we're not really reinventing the wheel — that's why I came here."

One of those future projects, he added, is improving emergency response in the community, including bolstering their fire department and creating a full-time EMS first responder program.

"A lot of First Nations, [their] goal is to be self-governing and self-sufficient, and being prepared in any emergency is important."