Video: Isolated from U.S., Northwest Angle residents have to go to Canada after latest border clampdown

Karen and Paul Colson leave a Steinbach grocery store with a cart full of groceries. The Americans say they have no other choice but to travel into Canada to buy their groceries, after the federal government imposed stricter rules on border crossings. Photo: Ian Froese/CBC

The new federal requirement for a negative COVID-19 test before crossing the border is supposed to keep Canadians safe from a raging pandemic.

But it's also forcing some Americans — who haven't self-isolated, or tested for COVID-19 — to travel into Canada for necessities like groceries, even though U.S. communities are closer to them.

"How many Manitobans was I within proximity of in the grocery store right now?" asked Paul Colson, as he placed a box of club soda into his SUV in Steinbach, Man., two hours from his home in the U.S.

A resident of Angle Inlet, Minn., Colson is cut off from his own country by pandemic restrictions that complicated border crossings.

His hometown, better known as the Northwest Angle, is one of the most isolated areas in the United States. It's surrounded on three sides by Canada and a body of water to the south. 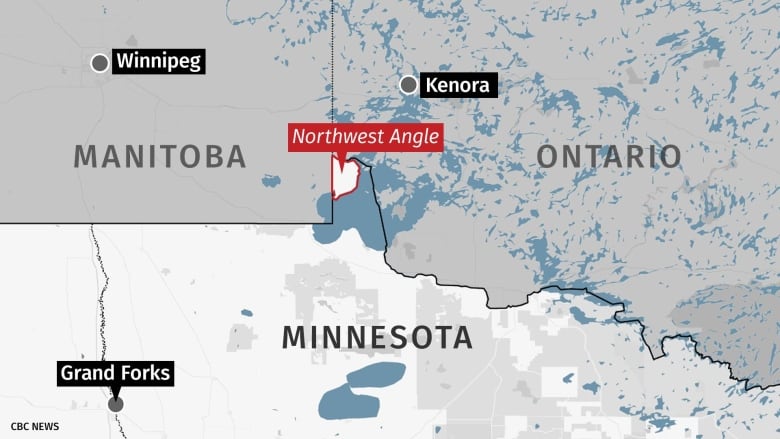 The Northwest Angle is sometimes called the chimney of Minnesota, for how it sticks out above the rest of their U.S. Image: CBC News Graphics

Although the Canada-U.S. border has been closed to non-essential travel throughout the pandemic, Angle residents were allowed to travel to the rest of the U.S. for some purposes via their only land link — a barren road that runs through southeastern Manitoba.

But in February, the Canadian government introduced a requirement that non-essential travellers entering Canada by land have a negative COVID-19 test less than three days old.

An exemption to the Canadian rule for a very few communities — including the Northwest Angle — allows residents there to enter Canada without a test "only to access necessities of life from the closest Canadian community" where they're available.

That means Colson can travel to Steinbach for groceries.

But the exemption doesn't say he can cross through Manitoba into mainland Minnesota, and then back across the border to get to his home in the Northwest Angle — even though that would mean a shorter trip than going to Steinbach.

Curiously, the order gives residents of a similarly isolated border town — Point Roberts, Wash. — an exception if they enter either Canada or the U.S.

The Public Health Agency of Canada didn't explain the discrepancy when asked by CBC News.

'Ludicrous' to have to go to Canada

So on Tuesday, he travelled two hours west for groceries.

"I'm going to go into a store here and mix with all sorts of Canadians," he said. "If I was to drive through Manitoba [to enter the mainland U.S.], through 40 miles of rural Manitoba, I'd never see anybody. It's ludicrous."

Under the new rules, travelling into the United States for groceries would become a multi-day endeavour.

"Isn't that a little bit of a hardship if I'm driving 65 miles to get groceries and then I have to go an extra 120 miles to get a COVID test and spend the night? Actually, it would be two nights likely," his wife, Karen Colson, said. "That seems a little ridiculous."

Border officials told Colson that they warned the Public Health Agency of Canada of the toll this would take on people in the Angle, but it happened anyway, he said.

"You either have, at best, indifference or, worse, maliciousness." 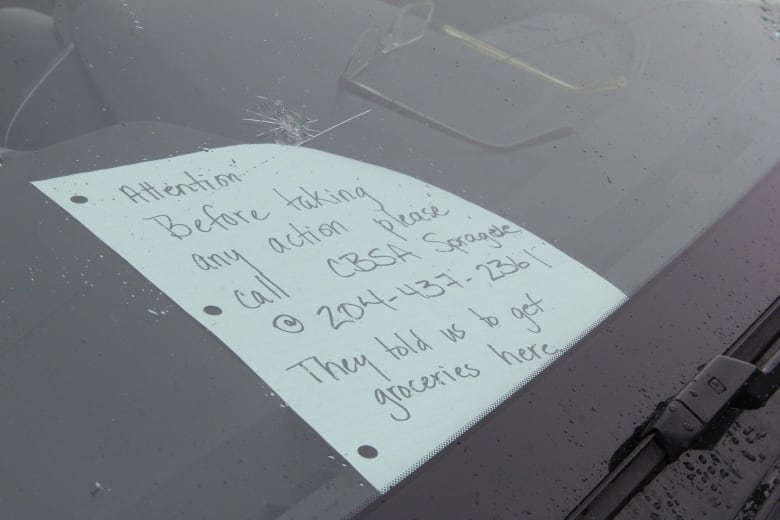 The Colson family places a note on their dashboard to let people outside a Steinbach grocery store know why a vehicle with American licence plates is in their country. Photo: Ian Froese/CBC

Some residents aren't bothering to take their chances with travel, Brett Alsleben said.

A COVID-19 test wasn't required when his son, who also lives in the Angle, crossed through Manitoba into Minnesota last weekend to visit a marine dealer, since it was a work trip. But he stuck around for another day to go fishing, and when he tried to cross into Canada, he was denied re-entry without a test.

He said people who regularly enter the mainland U.S. for work, such as himself, are tacking on trips to the grocery store and buying supplies for others.

Alsleben would like Canadian officials to exempt the 80-kilometre stretch of Manitoba road from travel restrictions, so Angle residents can move between the two countries with ease.

Known for its fishing, tourists have effectively been banned from the Northwest Angle during the pandemic — Canadians couldn't enter by land, nor could Americans, since they'd have to cross through Canada to get there.

Some people from the U.S. did come by boat, or later by ice road.

"When we had the ice road this winter, it brought life and brought excitement back to the local residents," Alsleben said.

"People had optimism, had thought everything was going to be OK. And then the ice road melts and now here we are — we're getting tighter restrictions." 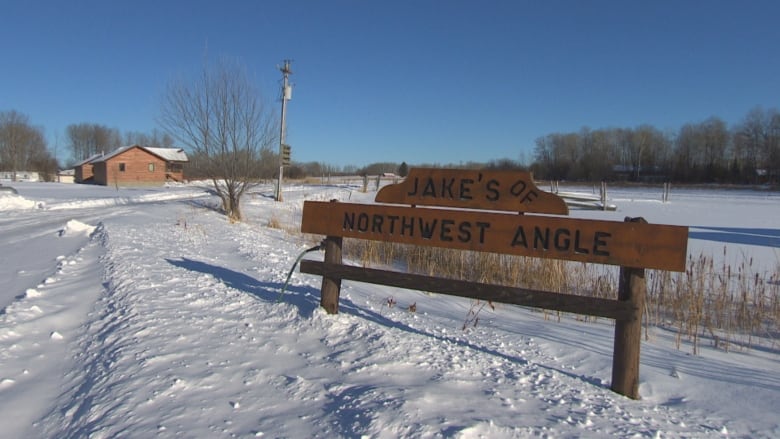 The Colsons, who own Jake's Northwest Angle resort, can survive the tourism slump because their fishing lodge is paid off, but not everyone can. Paul Colson said three of the dozen fishing lodges on the Angle are up for sale.

He's threatening a stunt to get Canadian officials to pay attention.

"We are publicly discussing how we go about blocking CN Rail from going through Minnesota. That's, I guess, going to be our next step," Colson said. "We are desperate to get Canada to have an actual, honest conversation on how we can mitigate this."

He said state and federal lawmakers in the U.S. have lobbied Ottawa to no avail.

To see the original report and related stories, follow this link to the CBC News website.  https://www.cbc.ca/news/canada/manitoba/northwest-angle-canada-negative-covid-19-test-1.5986992?__vf...