Steve Dumonski says that the otter he has nicknamed Dwight has a healthy appetite for minnows. He says Dwight ate 27 dozen in three days. Photo: Steve Dumonski

Most winters, Steve Dumonksi, of Sioux Lookout, Ont., ice fishes with a friend or two, or by himself. But this winter, things are a bit different, as he's now sharing his ice tent with a river otter he has named Dwight.

Dumonksi said he first met Dwight a couple weeks ago when the otter made an unexpected appearance.

"It was afternoon, and I had two walleye sitting beneath my legs in the hut," said Dumonski. "Next thing I know, he was dragging that walleye out between the flats and sleigh, scared me pretty bad."

Dumonski said he watched the otter run off to an island with his fish.

About six days later, Dumonski returned and Dwight was back. The angler said the otter is young, maybe a two-year-old.

While he has named it Dwight, Dumonski said he's not sure if the otter is a male, but chose that name because it came into his head.

Dumonski said he is also not sure why Dwight picked him to hang out with, but the otter seems to have included the angler's tent as part of its home range.

"I think he might have marked my hut or the cover for it because he was rolling around on it outside after he ate," Dumonski said. "So I don't know if he catches wind because the last time I was down the shoreline probably half a mile and he was going for the regular spot. And the other guys said he just put his nose up, stopped and made a beeline for my hut."

Part of the attraction for Dwight may be the plentiful supply of minnows that Dumonski has on hand.

He said that Dwight has become accustomed to helping himself to the angler's minnow bucket, and he has quite an appetite for the little fish.

"The one day he ate 27 dead ones off the ice. And then he came in my bucket and I stopped counting at six dozen and he came back for more." 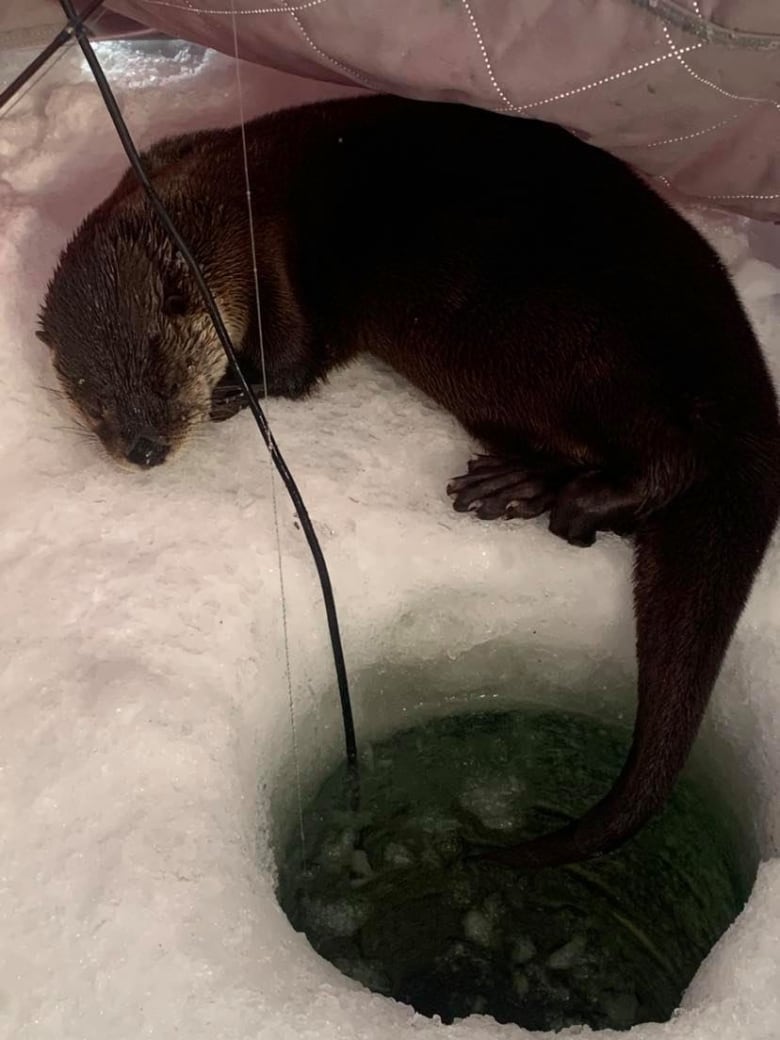 This river otter has been hanging out with ice angler Steve Dumonski, in his ice tent, for the last few weeks on Minnitaki Lake, near Sioux Lookout. The otter occasionally has a nap near an ice hole.  Photo: Steve Dumonski

Dumonski said he traps his own bait, otherwise Dwight would "not be allowed in the bucket."

Although Dwight started out a bit shy, he has has been getting a little more comfortable in the hut. Recently, the otter ate a large herring Dumonski had planned to use as bait, then got sleepy and had a nap in the hut.

Dumonski said the otter also likes to play in the ice fishing holes, but always comes to the hut over the ice.

He wonders if Dwight is a bit scared of diving down the hole.

"He always goes around the hole and he'll get a drink and stuff," said Dumonski. "He will stick like a third of his body down the hole and look around and then he'll come up and kind of chew on the edges. Like I think he wants to go for a swim down there. But I don't know if he's he's not confident in it or what."

To see the original story and read related reporting, follow this link to the CBC Thunder Bay website.  https://www.cbc.ca/news/canada/thunder-bay/river-otter-visits-angler-sioux-lookout-1.5944261