At first glance, Carla Rodriguez appears to be setting up for a typical photo shoot, but the process being used is nearly as old as the art of photography itself.

As friend and frequent model, Kiki Laing, strikes a pose. Rodriguez frames her subject and in a flash freezes a moment in time.

"I have always been drawn to processes that are more time sensitive and tactile using your hands," said Rodriguez.

Rodriguez specializes in tintype portraits - a technique that had its heyday in the Civil War. Instead of shooting on film, Rodriguez treats a sheet of aluminum with a chemical mixture to make it sensitive to light. She then puts the wet plate in her big red camera and gets one shot to take a picture.

Then, it’s back to the dark room and a bath in developer before a final wash in a chemical fix, where the image appears on the metal sheet as if by magic.

"It's almost like a dumbfounded reaction, ‘Oh my god. what is that?” said Rodriguez. “They've never seen photography like that, which I think is really an honor to be able to do that."

"I think whenever I get a tintype taken of myself it’s me at my most beautiful,” said Laing. “The strobe creates this really deep portal and you can see really far into somebody. Yeah, they are really beautiful.”

In her studio, Rodriguez takes portraits of individuals, couples and families and in the process allows the full spectrum of her customers to see themselves in a different light.

Back in the mid-1800s and early 1900s, tintypes were a popular way to document everyone from Civil War soldiers to Native Americans. Rodriguez enjoys using the technology to capture modern subjects through an old-fashioned lens.

“I like the idea of bringing back the ritualisticness of getting your portrait made and slowing that down and getting people to be more present in their bodies and seeing themselves in a different way and I think it’s really important and that is what this process brings to a lot of people," she said.

She even brought her talents to 38th and Chicago, where she took portraits of people of color for free to give back to the community after the death of George Floyd.

"This is a really historic moment that we are in right now and this process was used to document the Civil War, which was another racially motivated conflict and I feel it’s ironic that we are 200 years later and we are having the same issues and I am able to use the same process to document some of the same issues," said Rodriguez. 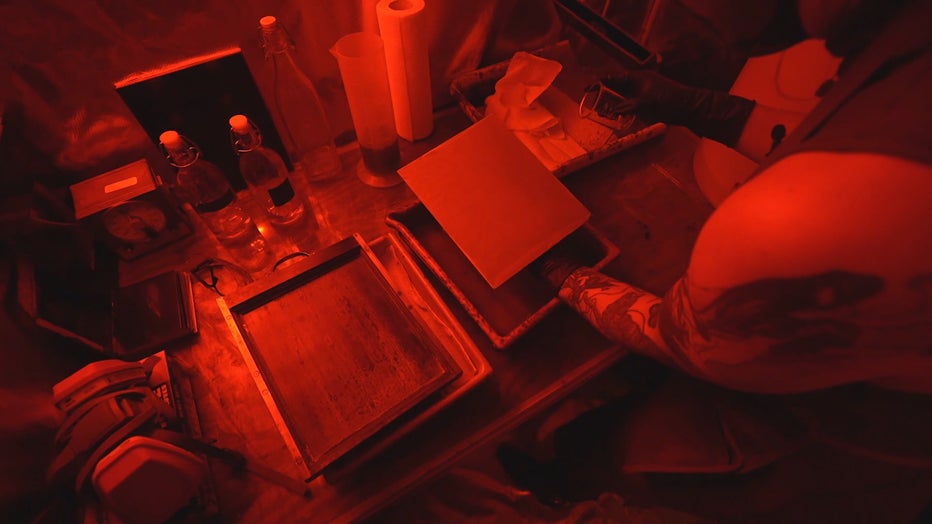 In this age of digital photography when cell phone selfies are a dime a dozen, Rodriguez says tintypes are enjoying a resurgence because people are looking for something more permanent to hang on the wall or hand down to their kids. What's better than an instant heirloom that will stand the test of time?

"Okay, I have thousands of pictures of myself and my family in my phone, but none of those pictures get to live in real life,” she said. “So the fact you get an actual physical object right off the bat with this process is really appealing to people and then it’s the only one. So it just makes photography special again."

To see the original story and read related arts reporting, follow this link to the KMSP-TV website. https://www.fox9.com/news/tintype-photographer-captures-modern-portraits-in-classic-style