The first wolf pups in several years have been born on Michigan’s remote Isle Royale, surprising researchers who have been tracking the large new batch of wolves transplanted into the wilderness there in the last two years. In addition to the new arrivals, recent research shows there’s some predator drama taking shape on this archipelago in Lake Superior: small groups of wolves have begun staking out territory on the island, and the last old island-born female was not seen during surveys from the air and on foot.

The results, released today, are from the 62nd year of the Michigan Technological University Winter Study at the national park, the longest-running predator/prey study in the world. Scientists are continually gathering information about the island’s wolf and moose populations, which have been fluctuating for decades. In recent years, the moose population has grown rapidly and their overbrowsing on trees was a concern. To combat this, the National Park Service in 2018 launched an effort to bring new wolves to Isle Royale, whose predator population by then had dropped to just two older wolves that were not producing pups.

Isle Royale sits in Lake Superior, about 60 miles north of Michigan’s Upper Peninsula mainland, and about 20 miles off the coast of Minnesota.

While it’s not clear how many new pups there may be, Michigan Tech researchers and their partners believe there are up to 14 adult wolves on the island, and an estimated 1,876 moose. That represents about a 9% decrease in the moose count - a loss that’s likely to be seen as good for the island’s rebalancing of predator/prey levels. That dip is credited to not only the new wolves taking down moose alone and in groups, but moose starvation, the study shows. 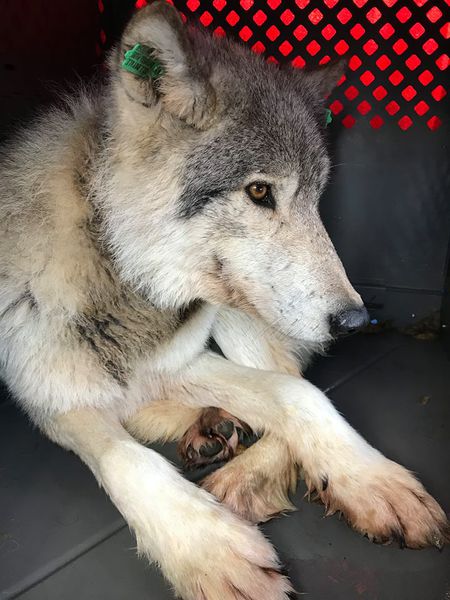 One of the Michipicoten Island wolves, caught for relocation to Isle Royale. Photo: NPS

But let’s talk about those new pups. A couple of them were likely born on Isle Royale sometime in 2019 and their existence seemed to be a bit of a surprise to researchers. They noticed one pup - as well as a mystery wolf - when they saw one of the older female wolves who had been transplanted from Canada associating with two wolves they didn’t recognize.

They knew the female wolf, which had been fitted with a GPS collar, was one that had been trapped on Michipicoten Island off the coast of Ontario and brought to Isle Royale with her pack members in early 2019. But the two wolves she was seen hanging around “have thrown the researchers a curveball,” according to Michigan Tech. One was clearly a juvenile wolf, with no collar and no ear tags like the other new wolves. The other wolf was a mystery - an uncollared wolf the researchers have not seen before, and whose markings do not match those of any of the transplanted wolves or the island’s last native wolf.

Scientists tapped some top wolf behaviorists, sending photos and behavioral observations of the juvenile wolf and asking for their opinion. They affirmed it was very likely a pup.

“The pup was born on the island, but may have been conceived before the new wolves were relocated to Isle Royale last March,” said Rolf Peterson, research professor in the College of Forest Resources and Environmental Science (CFRES). “It was a puzzle for us during the final two weeks of the fieldwork this winter.”

The researchers have not said where the other uncollared, unrecognized wolf came from. In the winter of 2019, researchers noted some new wolves had apparently walked across an ice bridge from the Minnesota or Canadian mainland and visited Isle Royale. It’s unclear if that unidentified wolf could have come to the island that way.

Other wolf pups have also been photographed on the island and researchers are trying to track back their likely parentage, and are analyzing wolf-pup scat found in den areas to determine the DNA links. In addition to pups born on the island in 2019, there were possibly two other litters this spring.

“Documenting reproduction is critical to the success of any introduction effort. In contrast to 2019 where female wolf 014F was likely pregnant before translocation, the breeding and rearing of two litters of pups this spring was a major step toward their recovery. We will continue to evaluate reproduction and recruitment of Isle Royale’s wolves using multiple lines of evidence including GPS collar data, remote cameras, DNA from wolf scats, and observations,” said Dr. Jerry Belant, a SUNY- ESF professor whose team is assisting the park service with characterizing the wolf introduction program. 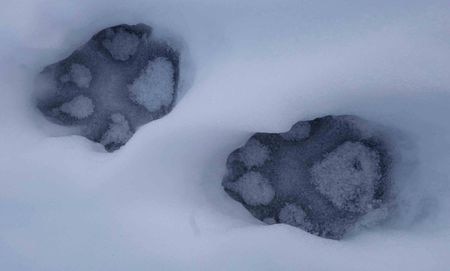 A newly-relocated female Isle Royale wolf has left the island in Lake Superior and walked back to the mainland on an ice bridge.  Photo: NPS

Since the fall of 2018, the park service and its partners have released 19 new wolves onto the island. They have been trapped on tribal land in Minnesota, on Canada’s mainland and one of its islands. They were sent to join the two remaining island-born wolves, who were also a father-daughter and half-sibling pair whose only sickly pup died years ago. The last two natives wolves were all that was left of a once-robust multi-pack system on Isle Royale that saw sharp losses because of disease, accidents, inbreeding and hereditary issues.

The last island-born male, known as M183, was found dead on a trail by a park ranger last October. He’d been killed by the new wolves. During this spring’s survey, team members searched for his mate. They saw no sign of the 9-year-old female, and don’t know if she’s dead or alive.

In the meantime, the new wolves have pressed forward, carving out territory as teams.

“There are two bonded male-female pairs that seem to be associated with territories that together cover most of the island, and there are two other females that likely mated but don’t have a clear territory of their own,” Peterson said. “Two of the pairs each have half the island. The third pair is playing the margins; they spend a lot of time on offshore islands and swimming. There is a lot of tension among groups. The two territorial bunches — I think that will be the spatial pattern.”

Researchers also noticed two collared male wolves who appear to be loners. They also looked for another male whose GPS tracking collar fell off him, but did not see him.

So between the 2 missing wolves, a mystery wolf and and unknown number of new pups, the wolf population remains in flux.

“The wolf situation on Isle Royale remains dynamic as these wolves continue to work out their relationships with one another,” said Mark Romanski, U.S. National Park Service natural resources manager and biologist who is coordinating the wolf introduction program. “It is expected that social organization ought to settle down, but then again, wolves often don’t abide by human expectations.”

While the groups are staking out territory, they are not yet formalized as true packs yet, researchers said. They are still building social bonds.

“A wolf population is more than a collection of individual wolves. A wolf population is organized,” said John Vucetich, a Michigan Tech CFRES professor. “It has social structure that includes wolves associating closely with one another, being territorial and exhibiting courtship behavior. We observed those social interactions this winter. It’s exciting to see.” 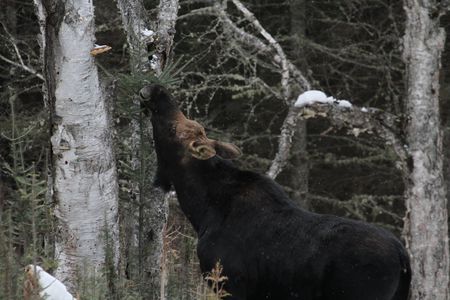 Moose Population Starts to Decrease After a Decade

The exploding numbers that most concerned the park service - the annual moose count - have seen their first drop in many years.

“After several years of rapid increase, moose abundance appears to have either declined slightly or perhaps remained about the same as last year,” Vucetich said. “That change is significant because the prior years of increasing moose abundance had been impacting Isle Royale’s forest in a pretty intense way.”

As wolf numbers declined in the last decade or so, the moose population for years had seen a steady uptick of about 19% per year. These big animals have big appetites, and their large numbers meant a decrease of some types of trees on the island, including balsam fir. With their forage buffet affected, researchers estimated about 100 moose starved to death in the spring 2019.

The new wolves are also a factor in the moose decline. This past winter, the new wolves' hunting efforts were deemed “successful.”

“The kill rate is a relatively high for the number of wolves we have,” Peterson said. “This is in part due to the fact that most of the wolves are in their own hunting unit, as opposed to being grouped into larger packs. The pairs kill moose and some of the single wolves kill moose. The wolves have killed roughly a moose every other day, or 25 kills in 48 days.”

Another 25 island moose were fitted with GPS collars this spring - 19 cows and six bulls. Researchers are eager to see what they will learn from this new group as they continue to expand the number of collared moose.

“It is critical for the NPS to understand moose population dynamics and the population’s impacts on the Isle Royale ecosystem. Our collaboration with MTU, as well with other universities and the Grand Portage Band of Lake Superior Chippewa, are helping to characterize the impacts of this voracious herbivore,” said Denice Swanke, the new superintendent of Isle Royale National Park.

“We’ll use data from these collared moose to assess how moose behavior and habitat selection affect the health of individual moose and ultimately moose population dynamics,” said Sarah Hoy, who leads the moose collaring project and is a Michigan Tech CFRES assistant research professor. “Additionally, through our collaboration we will compare the predator-prey dynamics and health of the population of moose on Isle Royale National Park to a neighboring population of collared moose on the mainland on the Grand Portage Indian Reservation. The two populations experience similar climate, but differ in other important ways. The comparison represents a unique opportunity to attain new insights into moose population dynamics.”

This transplant program has also seen its share of losses. Wolves found dead in a swamp, or attacked by other wolves have been documented, as have wolves who died of pneumonia or possibly from infection from a leg trap that was used. One wolf died of anesthesia-related stress before she could be transported to Isle Royale, and another new wolf left the island in early 2019 when a Polar Vortex created and ice bridge. She walked back to the Canadian mainland.

The last two island-born wolves were M183, left, and his mate/daughter/half-sister F193, right, are shown in this photo. Courtesy of Michigan Technological University and the Wolves and Moose of Isle Royale study.

To read the original article and see related reporting, follow this link to the live.com website.  https://www.mlive.com/news/2020/09/isle-royale-wolf-update-surprise-pup-a-mystery-wolf-and-a-lot-of-...