9 hours in a crevice: The story of a daring rescue mission at Ruby Lake Lookout, Ontario Wearing a bright red bear bell, Marley was bursting through bushes as she enjoyed the hike along the Ruby Lake lookout trail in northwestern Ontario. Photo: Submitted by Mikayla Klassen

What started off as a new adventure for Mikayla Klassen of Thunder Bay, Ont., and her dog Marley, turned into a tragic fall and daring rescue mission this summer.

Klassen, Marley and Klassen's friend Erika Puiras left their home shortly after 9:00 a.m. June 13 and headed out to hike the Ruby Lake Lookout, just outside of Nipigon, Ont. The overgrown trail zigzags along a cliff with majestic views of the lake, more than 30 metres below.

"We started going down this trail and I kept stopping all the time because there was moss everywhere. It was just creating this atmosphere where I felt like I was on the moon, like I was in a whole other world," Klassen recalled.

Marley was bursting through the bushes, and the jingle of a bear bell tied to her collar was ringing throughout the forest. 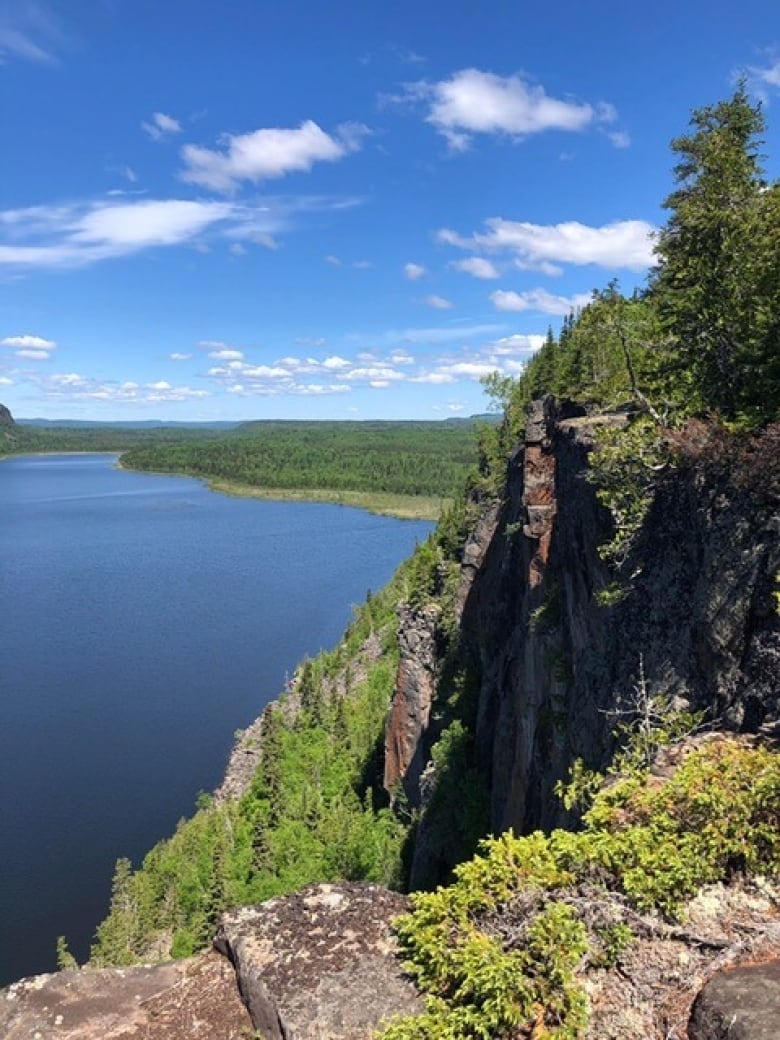 The adventuring trio arrived at the lookout around noon, and were taking some photos when it happened.

"All of a sudden, Erika and I hear a thump, and my heart just stops," said Klassen.

'Did she literally fall off the cliff?'

"Did she literally fall off the cliff?," Klassen asked herself as she and Puiras raced to where they heard the sound of something falling, and realized Marley was nowhere in sight.

Then, Puiras heard whimpering coming from a crevice in the ground. The jingling of the bear bell confirmed it. Marley had fallen through a crack in the cliff, and was trapped by the curving rock walls of the crevice.

A pine tree with low hanging branches covered part of the opening, which measured about one-and-a-half metres by half-a-metre.  On the other side, overgrown moss hid the hole from dogs, hikers and other passersby.

Knowing that Marley was trapped, but still unable to see her, Klassen called her dad and quickly formulated a rescue plan. He was on his way out with supplies and a flashlight, while another car full of family friends with rock climbing gear and experience also drove out to the trail.

"It's my dad, my sister, and then our family friend Theresa, her son Jesse and his girlfriend. And they all come and they get straight to work. They immediately put up an anchor for the rope and got everything set up. Then the next question is, who is going down there?" Klassen said.

Jesse had the most experience rock climbing, so he strapped on his harness and descended slowly into the crevice with nothing but a barely working flashlight.

But, then there was a new twist to the puzzle.

From a depth of about five metres, Jesse called up to the others.

"He can't see Marley. He mentioned 'okay, I can hear her panting. The bear bell is clear, more than ever. I can't see her, but I do see there's another hole. It's just utter blackness, but Marley's panting is coming from that hole'," said Klassen 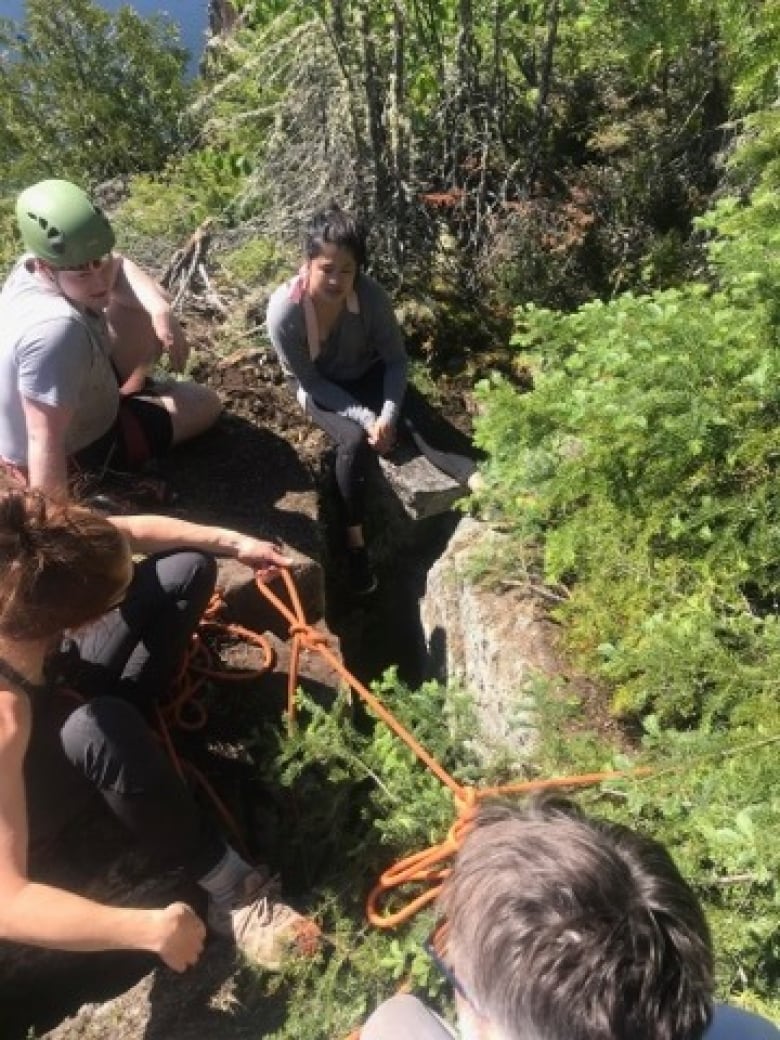 Jesse climbed back up and told the group the second hole is tight – it was about 60 cm by 15 cm wide.

A new plan was needed. Klassen and her dad started calling anyone and everyone who could possibly help.  They called the Ontario Provincial Police, local fire halls, and even a plumber in search of a fibre optic camera.

They reached only voicemails and deadends. By this time it was 5:30 p.m. and Marley hadn't been seen for five hours.

"I'm laying down in the dirt beside the hole where Marley is, just realizing that she is probably not coming out. Here I have a six-year-old, healthy lab. How long does it take for a healthy lab to die? And how long do I have to be here and wait?"

More camping gear and food arrived for the rescue team as they prepared to hold an overnight vigil for the fallen dog.

"I just got back into town from Wawa around 1:00 p.m. A half hour later I got a call from Theresa, which was a mutual friend, and she started asking me if I knew anybody who can help rescue a dog," said Daniele.

Daniele, a young Thunder Bay rock climber with about five years of experience, was doing some work on his house that afternoon, and said he could come out when he was done, if the dog was still stuck in the hole.

By 6:00 p.m., Marley was still very much stuck, and Daniele started driving east to Ruby Lake. 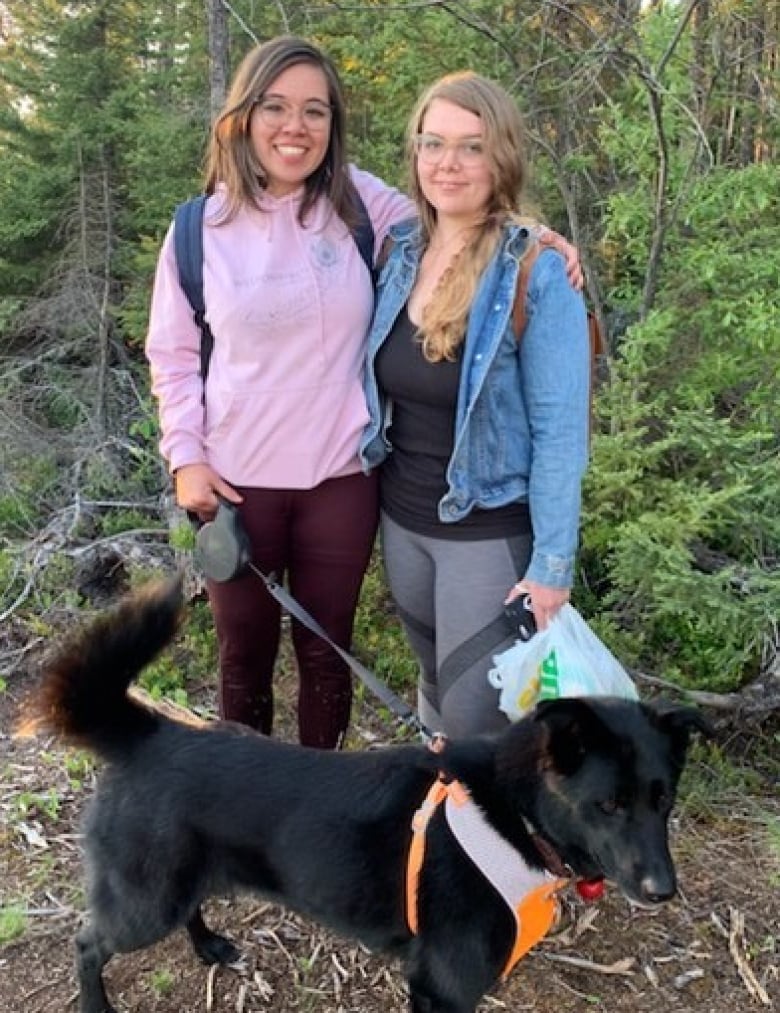 "I guess I should mention that Marley is a 60 pound lab, so she is quite a medium-to-large-sized dog. And here she has found a hole that fits her perfectly," added Klassen.

According to a detailed diary entry written by Klassen after the incident, Daniele arrived at 7:45 p.m. and immediately pulled on his harness and hooked up to the anchor line.

After a few climbs to scope out the situation, Daniele squeezed through the second hole and spotted Marley at the bottom of the crevice, 15 metres below the trail. He continued to descend.

I'm kind of battling my own demons out there as I go down.- Sandro Daniele, a local rock climber in Thunder Bay, Ont.

"Going down is really slow because I have my own views of a little bit of claustrophobia and I'm afraid of being buried alive. So I'm kind of battling my own demons out there as I go down."

Working through his own fears, Daniele reached Marley, and immediately began the task of attaching an improvised harness to the dog.

"The hardest part of this whole thing was trying to get the harness on the dog, because as you can imagine, you're standing straight up, you can't turn your head. All I can do is lean to one side."

Finally, Marley was secured and slowly lifted out of the deep crevice.

End of the ordeal in sight

At the top, the team was feeling a mixture of relief and excitement, while Klassen continued to send minute-by-minute updates to her family group chat.

"Then comes the moment. There she is. Marley jumps out of the hole practically, if it wasn't for the sling ... she's so excited her tail's wagging," Klassen added.

"Her eyes are bulging, so you could tell she's gone through trauma, but she's moving all of her limbs normally. The only thing you could see is a flap of skin with a couple drops of blood right underneath her chin." 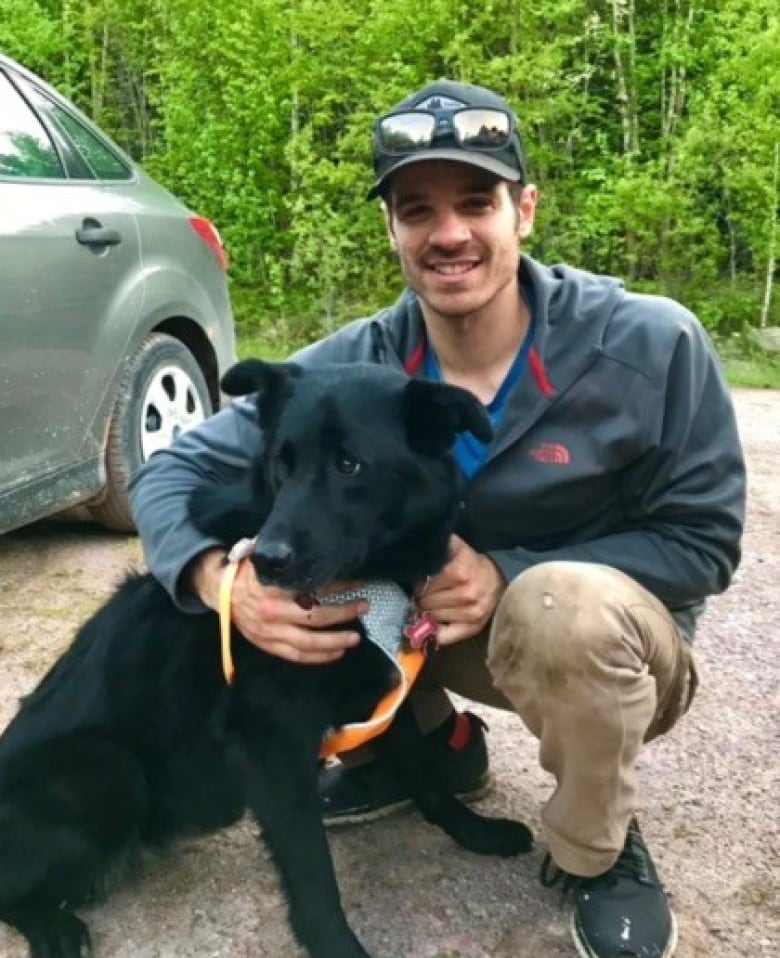 Local climber Sandro Daniele is reunited with Marley after an hour-long rescue mission to save the dog, who was trapped after falling down a 50-foot crevice at Ruby Lake. Photo  Submitted by Mikayla Klassen

An hour after first descending into the crevice, and nine hours after Marley fell down "Mother Nature's booby trap," Daniele emerged from the black hole to a round of cheering.

"When I got out, I went to go say hi to the dog Marley and she was full of excitement. She jumped on me being all playful and all energetic and everything," recalled Daniele.

Finally, as the sun started to set over Ruby Lake, Klassen said the group began the 90-minute drive back to Thunder Bay, shaken, exhausted, but very relieved.

As for Marley,  Klassen said she's already bored at home and ready for the next adventure.

You can hear the full interview with Mikayla Klassen on CBC's Superior Morning here.

To see the original story and read related articles, follow this link to the CBC Thunder Bay website.  https://www.cbc.ca/news/canada/thunder-bay/ruby-lake-rescue-1.5641978