Deep snow has made for great trail conditions on hard ground, but has been insulating the swamps, according to Adrian Tessier, President of the Northwestern Ontario Snowmobile Trails Association. Photos: Thunder Bay Adventure Trails

This year's heavy snowfall is making for a good snowmobile season, but it's also presenting some challenges.

The President of the Northwestern Ontario Snowmobile Trails Association says 95% of the groomed trails in the Thunder Bay area are open.

Adrian Tessier said there's plenty of snow for trail groomers to work with, but heavy snow is also presenting some challenges, particularly in wetter areas.

"Our big issues are the swamps," he said "With all this snow they are not freezing. We haven't had a lot of cold weather when we had minimal snow. So we are going out today to one of our swamps where we haven't had a groomer yet this winter. It's been snowmobile packed but we will have to give some holes, and check for water before we cross."

Tessier explains the high grass around swamps catches the snow and tends to insulate the water from freezing. He said when a groomer heads onto a swamp and gets stuck, removal of the machine is a huge job.

Two groomers have already been stuck in a swamp this season, and Tessier said removal was difficult. "It was no picnic. But nothing got broken. Sometimes you've got to get heavy equipment in there...sometimes, you have to build a separate road, cause you might have to cross two swamps to get to that swamp." 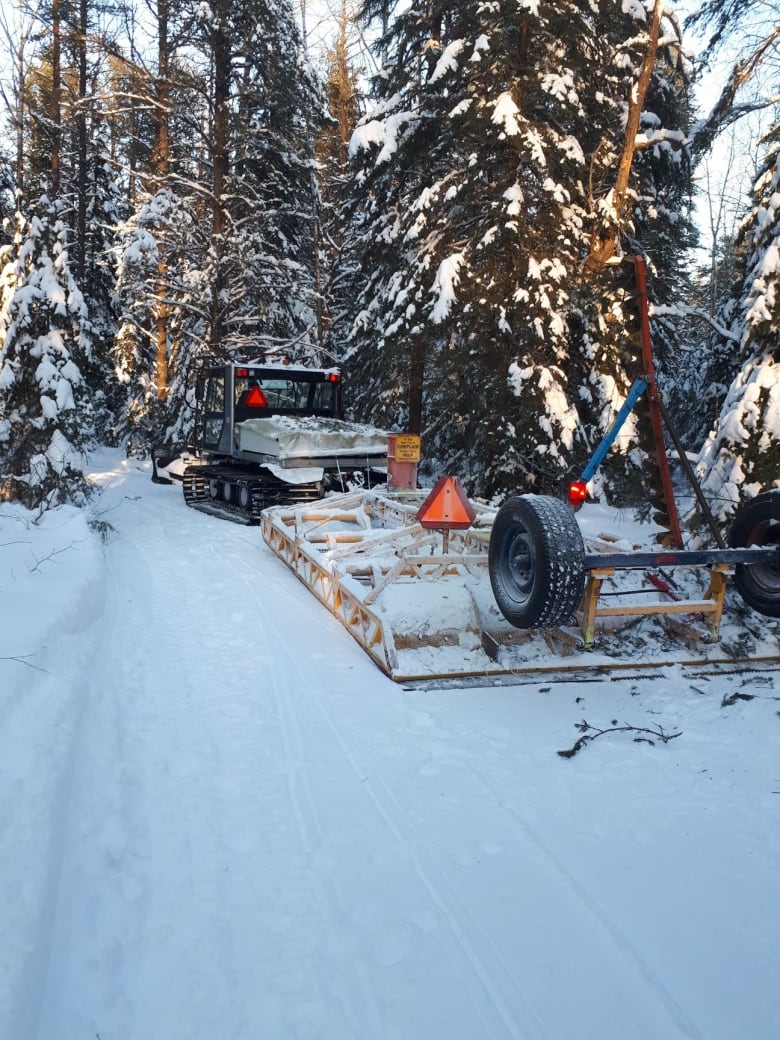 He said some lakes in the region have a lot of slush as well, but trail groomers take no chances.

According to Tessier, groomers only drive on lakes when the ice is sufficient. "The lake crossings we go and pack them and stake them with snowmobiles," he said. "Then we put an orange fluorescent stake ever 100 metres across the lake. Then what we do before the groomers is we will drill test holes and see how deep the ice is. We won't put the groomer on the ice unless there is 18 inches [45 cm] of good, clear ice."

In some places, Tessier said if you step off the groomed trail the snow is waist deep. He said having too little snow is never good, but he feels at this point in January, no more is needed.

He noted some trails in the Thunder Bay area are "off and on" due to logging situations and the trail to Atikokan is not yet clear due to a stream that can't be crossed.

Tessier said anyone who wants to know the state of the trails can go to the Ontario Federation of Snowmobile Clubs website www.ofsc.on.ca and go to the interactive map to check trail status.

To read the original article and see related reporting, follow this link to the CBC Thunder Bay website.  https://www.cbc.ca/news/canada/thunder-bay/deep-snow-a-mixed-blessing-for-snowmobilers-trail-groomer...