Thunder Bay's 50th anniversary celebrations kicked off with a guest of honour, as well as a look back at the city's past five decades.

Thunder Bay came into existence on January 1, 1970, following an amalgamation of the cities of Port Arthur and Fort William, as well as the townships of Neebing and McIntyre.

Ontario Lieutenant Governor, Elizabeth Dowdeswell, the guest of honour at the event as well as the annual New Year's Levee, said the city's golden anniversary is a good time to look at the past, but also celebrate where the city is moving in the future.

"I think it's a time when milestones like this cause us to reflect on where we've been, and how far we've come, and think a little bit about how we can do better into the future. And, that's what turning a new leaf is, whether it's a new year, or in this case, a new decade."

Dowdeswell spent New Year's Eve touring the city, visiting the Thunder Bay Public Library, and the city's water treatment plant, where she was told the city had some of the cleanest water in the world.

She said the two sites, which were only a portion of what she took in during her visit, were strategic. The library has pushed the need for social programs in the city, while Dowdeswell said she also wants to see all Ontarians with access to clean drinking water. 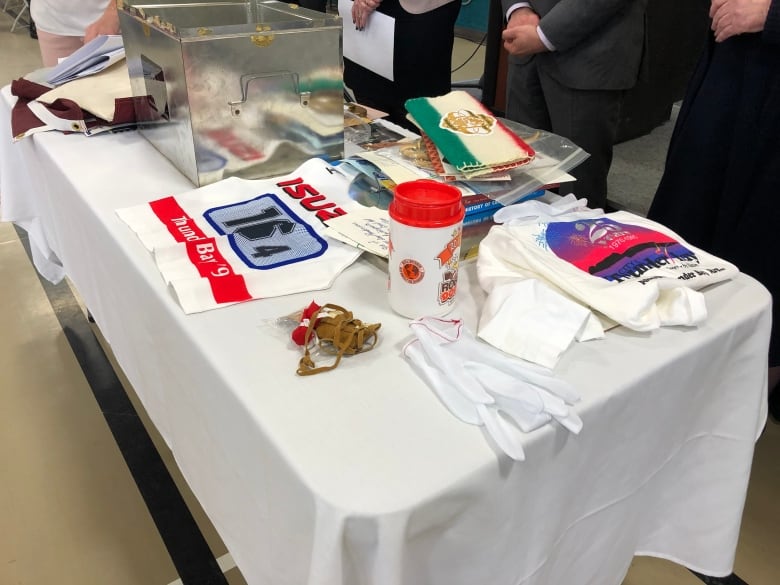 Some of the contents of a time capsule, sealed in 1995, and re-opened in 2020 as part of Thunder Bay's 50th Anniversary celebrations. Photo: Jeff Walters/CBC

"It was a great place to see. What is really nice to see is the pride people take in the work they do."

The other major event was the opening of a time capsule, filled 25 years ago during the city's 25th anniversary.

City officials opened the box about a week ago, and took out some items, only to find they couldn't get everything in once again.

"It's surprising, the variety of stuff that's in there," said Matt Szybalski, the city's archivist. "The number of things that people from the community thought would be worthwhile looking at 25 years from now. It's a really good cross-section." 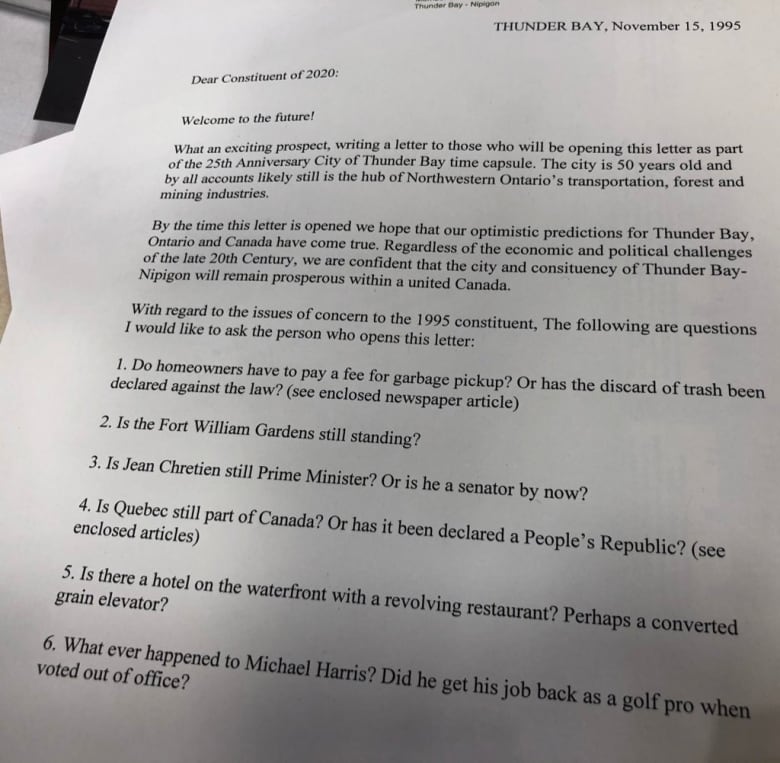 The first page of a two-page letter written by former MP Joe Comuzzi on questions he and his staff, from 1995, had for people living in Thunder Bay in 2020. Photo: Jeff Walters/CBC

Some of the items found in the capsule included a photo of the city council of that day (in black and white) along with a Summer in the Parks program, a listing of businesses with the Thunder Bay Chamber of Commerce, a bib from the 1995 Nordic games and brochures from both McKellar Hospital and the Port Arthur General Hospital.

The most intriguing item, however, was a letter penned by then-MP Joe Comuzzi. In the letter, Comuzzi asked a number of questions that would be on the minds of constituents in 1995. 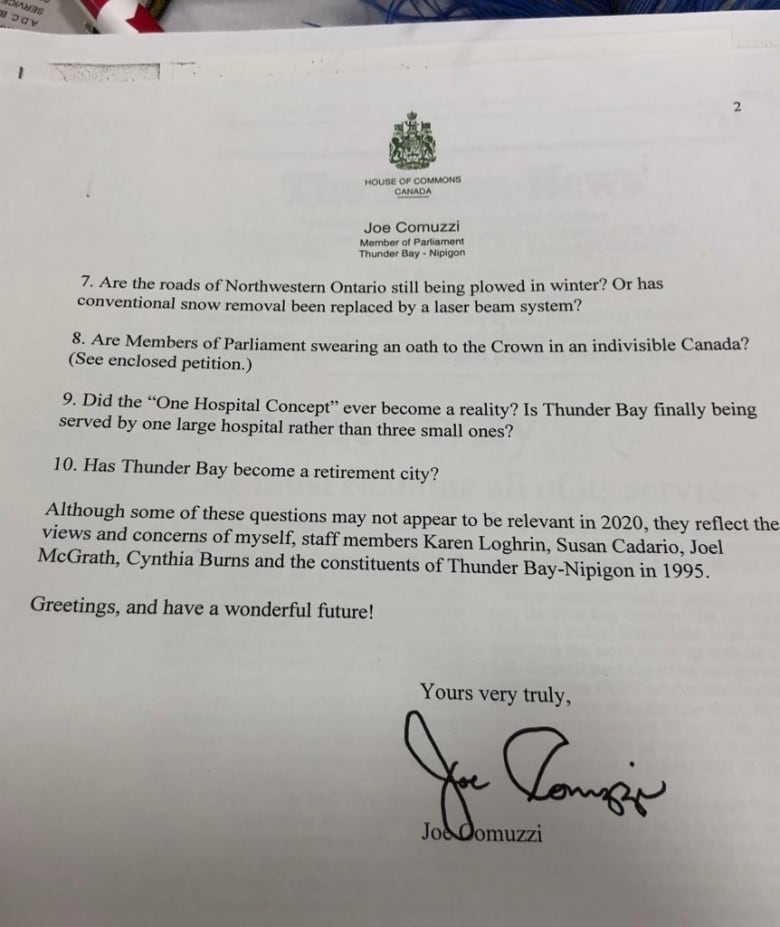 The second page of a two-page letter written by former MP Joe Comuzzi on questions he and his staff, from 1995, had for people living in Thunder Bay in 2020. Photo: Jeff Walters/CBC

In the letter, Comuzzi wrote that the city would still be the hub of Northwestern Ontario's transportation, forest and mining industries. At the time, Comuzzi represented the Thunder Bay - Nipigon riding, which has since had its boundaries changed.

The city will start looking for input this year, on what to put in another time capsule, which may be opened in either 25 or 50 years.

To read the original article and see related reporting, follow this link to the CBC Thunder Bay website.  https://www.cbc.ca/news/canada/thunder-bay/thunder-bay-fifty-years-levee-kickoff-1.5412458
News