It might not feel like January in the South and parts of the Midwest and East, where temperatures will likely be well above average, according to the latest outlook from The Weather Company, an IBM Business.

Temperatures are expected to be the farthest above average in the Southeast and lower Mississippi Valley. Warmer than average temperatures will extend into the Midwest, Plains and mid-Atlantic.

Parts of the Northeast, including New England, as well as most of the West can expect temperatures near or slightly above or below average in January.

The only area where below average temperatures are anticipated in the first month of the year is from northern Montana into northern Idaho and far northeastern Washington.

"Given the current forecasts for the first nine days of the month, the lack of evidence of any significant polar blocking on the horizon" and the expected track of the jet stream, a warmer January is anticipated in the East, noted Dr. Todd Crawford, chief meteorologist with The Weather Company.

What Factors Are Driving This Forecast?

December is ending relatively mild across much of the eastern half of the United States, with frigid conditions locked up in Alaska, and this trend is expected to persist into early January due to a strong polar vortex, a negative Pacific/North American pattern and a positive North Atlantic Oscillation.

A very strong polar vortex is expected to persist into the beginning of the new year and will likely lead to a mild January. The polar vortex is an area of low pressure over the poles and it is not a storm with cold and warm fronts. When the polar vortex is strong, it typically keeps the coldest air over the Arctic, and cold plunges of air into the Lower 48 are less likely. 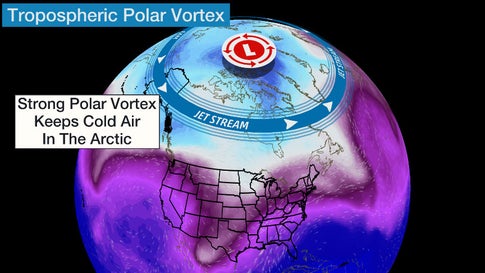 A strong polar vortex keeps the coldest air over the Arctic.

The Pacific/North American pattern (PNA) is expected to be in the negative phase in January. This usually corresponds to a southward dip in the jet stream over the West and a ridge of high pressure over the East.

The North Atlantic Oscillation (NAO) is in a strong positive phase – another piece of the puzzle. This pattern has yielded a lack of blocking in the upper levels of the atmosphere so far, which often means colder winters in the East and warmer ones in the West.

During a positive NAO, there is a strong area of low pressure near Iceland and an area of high pressure near the Azores. This setup correlates to above average temperatures in the East, with cooler than average conditions confined to parts of the West. 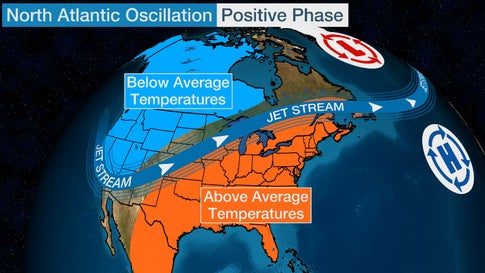 January is the coldest month of the year for most areas east of the Rockies, so even with above average temperatures, it will still be chilly at times.

(MORE: When Is the Average Coldest Time of the Year?) 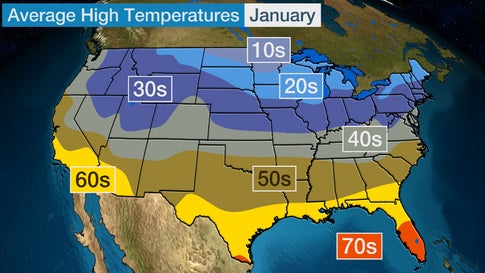 Above average low temperatures will bring some relief from the bitter cold that is often synonymous with January in the Midwest and Northeast, where average lows range from the single digits to the 20s. Warmer than average lows in the South would generally mean temperatures averaging above freezing.

Near average temperatures are likely for much of the West, which suggests chilly nights, especially in the interior West. 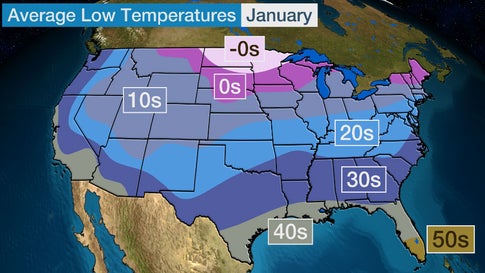