Residents in the community of Neskantaga, over 400 km north of Thunder Bay, took a picture of this purple gallinule, found in the First Nation on Tuesday. The bird usually makes its home in Florida, Central America and the Caribbean. Photo: Neskantaga First Nation

Talk about a diverted flight.

The northwestern Ontario community of Neskantaga, about 400 kilometres north of Thunder Bay, welcomed a rare visitor this week when a purple gallinule – a bird whose natural habitat is Florida, Central America, and the Caribbean – was discovered shivering in the cold.

"We felt pretty honoured to save the bird," said Gary Quisses, a band councillor in the First Nation, who explained that a mechanic found the bird Tuesday morning as he was walking between the community's arena and warehouse.

'No one could identify it'

"He walked towards it and picked it up and put it in his vehicle and drove to our administration office where he showed some staff. Elders were called to see if they could identify the bird, but no one could identify it."

The community began distributing photos of the bird, and with the help of Lakehead University and Thunderbird Wildlife Rescue (TWR) in Thunder Bay, the bird was identified as a purple gallinule.

"Well, it was a little surprising, seeing a summer bird during the winter. I don't think anyone had ever seen a bird like that in the past years. It was a good topic in the community for people to talk about," said Quisses.

How did a southern bird get so far north? 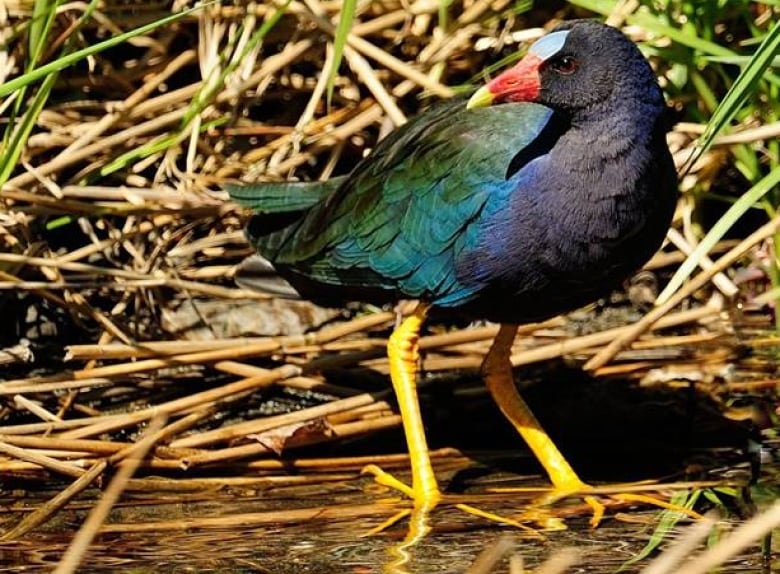 Shawn Flitzpatrick took this photo in 2018 of a purple gallinule, on the banks of the Waterford River in St. John's N.L. Photo: Shawn Fitzpatrick

It's unclear how the bird ended up so far from home, but Quisses has a few ideas.

"Natural disasters are happening down south, the [Amazon] rainforest was burned this summer, you have big forest fires, hurricanes, tornadoes. Maybe it got picked up or pushed up with one of those disasters."

In fact, according to the All About Birds website, run by the Cornell Lab of Ornithology at Cornell University in Ithaca, New York, "Purple Gallinules are remarkable fliers and turn up far out of their normal range surprisingly often. They've even shown up in Iceland, Switzerland, South Georgia island, the Galápagos, and South Africa. A recent study noted that these may not be mere accidents: years with severe drought in the gallinule's core range tended to produce more so-called vagrants in autumn and winter. In other words, these wanderers may not be lost but perhaps seeking places to feed because their usual haunts do not have adequate food."

If the bird flew north in search of food, it was probably very disappointed. Neskantaga has had below zero temperatures and snow for several weeks.

Bird expected to be seen by vet Friday

This is not the first time people in the community have rescued a bird. Last year, members found an injured bald eagle, which was also sent south for treatment.

Purple gallinules have also appeared in other parts of Canada, including several sightings in Newfoundland and Labrador since 2018.