The over-century-old dock at Silver Islet, east of Thunder Bay, has been closed since 2013 when the structure's owner, Fisheries and Oceans Canada, deemed it unsafe. Photo: Matt Prokopchuk / CBC

Federal officials and the president of the Silver Islet Campers Association say they're working together to rebuild the shuttered historical dock at the small cottage community east of Thunder Bay, Ont., and to transfer control of the local recreational harbour to a new authority.

The large, over-century-old timber dock that serves the mostly-seasonal community of a few hundred property owners was closed in 2013 when Fisheries and Oceans Canada, which owns the structure and the small harbour, deemed it unsafe.

Talks have taken place periodically since then over the possibility of the federal department rebuilding the structure, divesting itself of the harbour and transferring control to a local authority, as it has done with other small craft harbours.That authority is a new not-for-profit formed by representatives of the Silver Islet Campers Association, the Silver Islet Yacht Club and the Canadian Lighthouses of Lake Superior, said Scott Cheadle, the president of the campers association as well as the new partnership, called the Silver Islet Harbour Association.

"We have an understanding that it's due to start probably some time around Thanksgiving of this year," Cheadle said of the planned work to tear out the existing dock and build a new one, while also making other improvements.

"They have the budget. We have agreed [to] a scope of work – what they're planning to do – and they're just finalizing their engineering drawings and putting it out to tender."

Even though there's no final agreement in place yet, Cheadle and Fisheries and Oceans Canada officials said that the scope of the work will include: 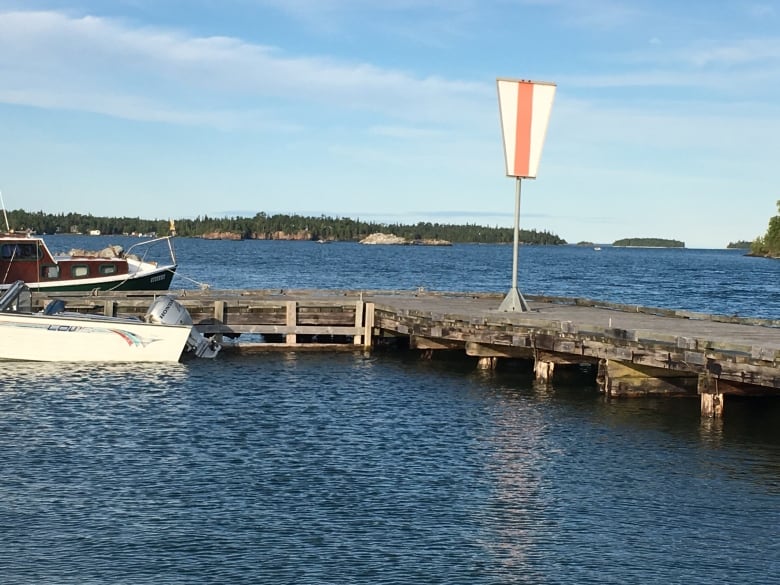 The new structure won't have the section that curls back toward shore, said Scott Cheadle, the president of the new harbour authority, but additional docking infrastructure will be built in the harbour. Photo: Matt Prokopchuk / CBC

"It will be a dock built to last decades," Cheadle said.

The inability to access the existing dock at Silver Islet has raised safety concerns, especially if a forest fire were to jump the only highway that accesses the community, which is located at the end of the Sibley Peninsula and the nearby Sleeping Giant Provincial Park.

Cheadle said it also serves as an emergency mooring for boaters should they be caught on Lake Superior when a storm whips up.
The dock, once open, will also be an access point to the Lake Superior National Marine Conservation Area.

"Our mandate will be to operate [the dock and harbour] for the public good," Cheadle said.

A Fisheries and Oceans Canada spokesperson said that the work is slated to begin this fall and be completed by spring 2020. A final cost will be available once the contract is awarded, but the funding will come from money set aside in the 2018 federal budget.