In Minnesota, Dying Gasp of One Local Newspaper A photo of a final copy of the Warroad Pioneer.  Photos:  Tim Gruber of the New York Times

Whenever she thought her small staff would be facing a particularly stressful deadline day, Rebecca Colden, the publisher of the weekly Warroad Pioneer, declared a Bloody Mary Monday.

This was definitely one of those Mondays — indeed, the last of them. The Pioneer, the newspaper that had served this tiny town just below the Canadian border for 121 years, was one issue away from certain death.

When Ms. Colden woke up that day, she listened to a contemporary Christian song that had buoyed her spirit of late: “This is my story, this is my song/Praising my savior all day long.” Now she was trudging into the newsroom on a cold May morning with vodka, olives and tomato mix. A mock-up of the front page greeted her on the newsroom printer, screaming out a bold, striking headline: FINAL EDITION. She sat at a desk and opened some bills, one of them stamped “past due.”

With the distribution of its final issue on May 7, The Warroad Pioneer, which printed about 1,100 copies per week, joined roughly 2,000 newspapers that have closed in the United States over the last 15 years, according to a study by University of North Carolina researchers soberly titled “The Expanding News Desert.” Today in many American communities, the researchers noted, “there is simply not enough digital or print revenue to pay for the public service journalism that local newspapers have historically provided.”

In Warroad, The Pioneer was full of soft-focus features on residents, reprinted news releases, photos of fishermen with their outsize catches, and news of awards won by children and Shriners. There were the occasional stories, too, about city officials, the school board and local sports.

This, then, was what the desert might look like: No hometown paper to print the obituaries from the Helgeson Funeral Home. No place to chronicle the exploits of the beloved high school hockey teams. No historical record for the little town museum, which had carefully kept the newspaper in boxes going back to 1897.

And what about the next government scandal, the next school funding crisis? Who would be there? Who would tell?

“Is there going to be somebody to hold their feet to the fire?” asked Tim Bjerk, 51, an in-house photographer at Marvin, the big window and door manufacturer that dominates the town.

Others imagined the news moving from person to person, unedited and unchecked, on Facebook or other social media networks. “A lot of it is going to be word of mouth through kaffeeklatsches,” said Todd Miller, 57, a former member of the county commission. “And who knows what variant of BS gets passed around there.”

The American news desert advanced, though after a few weeks, a new paper, The Warroad Advocate, would spring up, distributed free to anyone with a post office box. The publishers called it a 13-week trial, contingent on community and advertiser support, and so it was not clear whether it would continue beyond its experimental run.

At The Warroad Pioneer, it had been a death by familiar cuts. Hardly anyone took out a classified ad anymore. Amazon, with its doorstep retail service, has felt particularly miraculous in this remote stretch of Minnesota, where winter temperatures can dip to minus 35 degrees Fahrenheit. Storefront retail has suffered. Doug’s Supermarket, the only grocer in town, preferred to put its color shopping inserts inside a fat, free, ads-only mailer called The Northland Trading Post.

“I don’t want to feel like I’m letting the community down, but I also know I’m a small business, and it’s dollars and cents,” said Ms. Colden, who added that her paper was far from turning a profit. “I’m broken with the decision. I’m just broken with it.”

Ms. Colden had announced the paper’s demise — one of about 65 to close in Minnesota since 2004 — in a letter to community leaders a few weeks earlier. Warroad’s “dire retail reconfiguration and exodus,” she wrote, “has had a catastrophic impact on this community newspaper.”

She was surprised when people were surprised. She thought they had recognized the cry for help that was the March 14, 2017, issue. A front-page bar below The Pioneer’s flag was always reserved for a quotation of the week, usually from the likes of a Billy Graham or John F. Kennedy. But this time it was from Tupac Shakur: “I’m a reflection of the community.”

Below was a sea of white space, where the articles usually were, and a message floating in the middle: “Without YOU, There is NO Newspaper!”

But what could be done? Mike Kvarnlov ran the local G.M. dealership for years before recently selling it to his son. He thought it was a tragedy that the paper would be folding. But the new world was what it was.

“Fifteen years ago, we were 50 percent paper and 50 percent radio,” he said of the dealership’s advertising budget. But now, most of the money went to the internet, with print and radio only in the mix to reach older people. And each year, he said, online advertising “gets a larger percentage as the old people are going away.”

The Trouble With Truth Telling

It was sometime after 9 a.m. when Ms. Colden’s remaining staff — Koren Zaiser, 48, the editor, and Jenée Provance, 56, the page designer — rolled into the Pioneer newsroom. Shelley Galle, the longtime office manager, had already taken a job at the Seven Clans Casino across the river.

Outside there was no grand rally to save The Pioneer. It was mostly another day in Warroad, population 1,880. Farmers gossiped over breakfast at the Daisy Gardens restaurant. Workers trudged by the hundreds to their jobs at the big, yellow Marvin window factory.

Part of the problem, Ms. Colden suspected, was that no one could imagine Warroad without the paper that had been publishing since the McKinley administration. “There’s that complacency,” she said. “With a 120-year-old paper, they are just so sure we’re always going to be there.”

Everyone read the Court Report. Some weeks it seemed like the sole flinty standout in a paper full of trophy hoisters and plaque clutchers, fishing advice and garden tips. Ms. Colden hawked the space around it as the best advertising real estate in the paper. Over the years people had tried to bribe their way out of the Court Report, Ms. Colden said, to no avail.

If you messed up, you were going in. 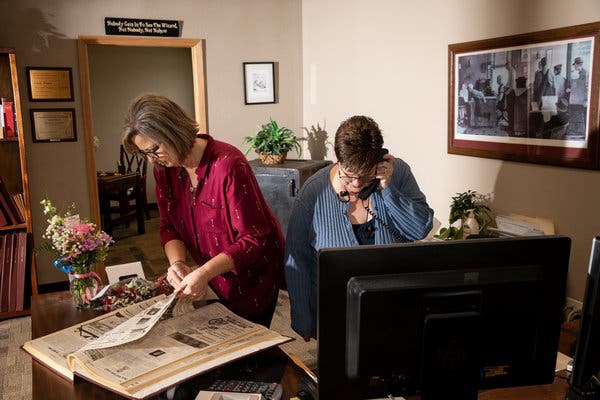 Rebecca Colden, the publisher of the weekly Warroad Pioneer, left, and Jenée Provance, the page designer, in the newsroom. 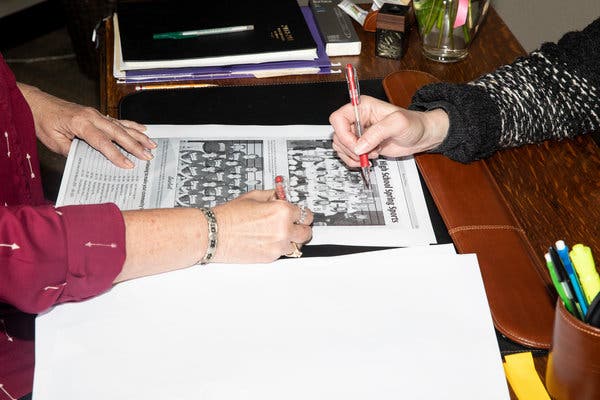 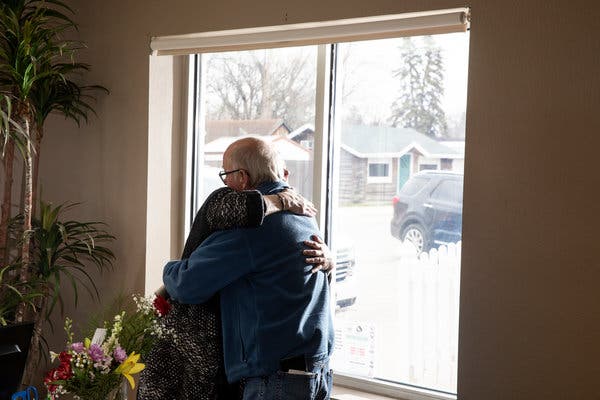 Ms. Zaiser received a hug from a visitor to the newsroom.

In fact, Ms. Colden herself had made the Court Report for speeding. Ms. Provance had been in it for driving with expired tags. Ms. Zaiser landed in it in October 2014 for driving while drunk.

It was the truth at its most raw, and Ms. Colden believed it served an essential small-town function: “Accountability,” she said. Ms. Zaiser wrote a confessional column the week she appeared in the Court Report, acknowledging that her drunken driving could have killed somebody. The experience, she said, set her on a path to a renewed Christian faith.

“It’s one of those things that shows us that all of us are fallible,” said Wayne Maxwell of Woodland Bible Church, Ms. Colden’s preacher, who had been counseling her through the paper’s demise. “That nobody is above anybody else.”

But there were also instances in which Ms. Colden and Ms. Zaiser believed that printing too much of the truth might be dangerous enough to unwind Warroad’s social fabric. There were only so many people in Warroad the paper could afford to offend.

In early April, they learned of the case against Joshua Demmerly, a hometown boy who became a Warroad police officer. In court documents, the authorities accused Mr. Demmerly, 29, of stalking, kidnapping and sexually assaulting a Warroad teenager. Detailed descriptions of the allegations were divulged in other, bigger Minnesota news outlets. And though The Pioneer ran the article on its front page, it was mostly just a bare-bones list of the charges.

It was a self-inflicted patch of news desert, but Ms. Zaiser defended the decision. “If you want the graphic details of what happened, you can read it in The Grand Forks Herald,” she said, referring to the paper in the larger North Dakota city a few hours’ drive away. “Especially because I know the victim. He’s a friend of my son’s. And it’s awful.”

‘Taking a Whip’ Around Town

Warroad residents call a quick, social drive around the heart of town “taking a whip.” On a whip one sees train tracks, pickup trucks, and signs and stickers declaring “Hockeytown USA,” a nod to Warroad’s production of an outsize number of famous hockey players.

It is a city without traffic jams; indeed, it is one that could use a few more people. (A glossy visitors’ guide ends with a pitch: “If you enjoy spending time in our area, why not make it your new home?”) And it is a city defined by the big buildings owned by the Marvin company — offices, factory space, a big hardware store and a 6,000-square-foot visitors’ center. Inside is a museum-quality exhibit on the company’s long local history, and profiles of the Marvin family members who serve as Warroad’s de facto royal family.

Ms. Colden tends to take her whip in her Chevrolet S.U.V. with the yearning strum and thump of praise music on the stereo. She is 59, politically conservative, with a slight resemblance to Hillary Clinton and a voice that shares some of Mrs. Clinton’s no-nonsense, Middle American timbre.

Editor's Note:  Boreal Community Media is a non-profit 501(c)(3) organization.  We depend on community support for our survival. For information on how you can make a donation to continue our operations, email us at [email protected]
News