Commentary: Start acknowledging the people who lived on this land first By Chip Colwell, Lecturer on Anthropology, University of Colorado Denver from The Conservation - June 27, 2019

In Toronto, before singing “O Canada,” students and teachers in public schools begin their day by acknowledging that they are on the traditional lands of the Anishinaabe, Haundenosaunee Confederacy and Wendat.

Although the Toronto School District Board mandated the brief statement in 2016, the practice of land acknowledgment, which recognizes “the unique and enduring relationship that exists between Indigenous Peoples and their traditional territories,” has spread on its own across Canada. Today, a declaration is read before most public meetings, celebrations and events. Even hockey games. 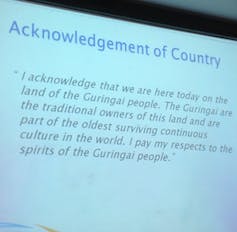 One presentation in Australia includes a slide acknowledging the traditional owners of the region’s land. Vivian Evans/Flickr, CC BY-SA

Versions of land acknowledgments are widely practiced in countries that are working to untangle the historical knots of colonialism. In Australia, those leading public occasions often recognize whose traditional lands they are on; others invite an Aboriginal elder to conduct a more formal “Welcome to Country.” In New Zealand, it is common for public speakers to acknowledge they are situated within Aotearoa, the homeland of the Māori.

But no matter where one is located or how it is performed, as essayist Stephen Marche has written, “The acknowledgment forces individuals and institutions to ask a basic, nightmarish question: Whose land are we on?”

As land acknowledgment has gained traction in the U.S., I have recently started doing it. I’m an anthropologist who has researched the dispossession of Native Americans and their enduring connections to ancestral places. I’ve come to see the possibilities of land acknowledgment to confront the past while laying the groundwork for building a shared future. Land acknowledgment offers a needed reckoning. 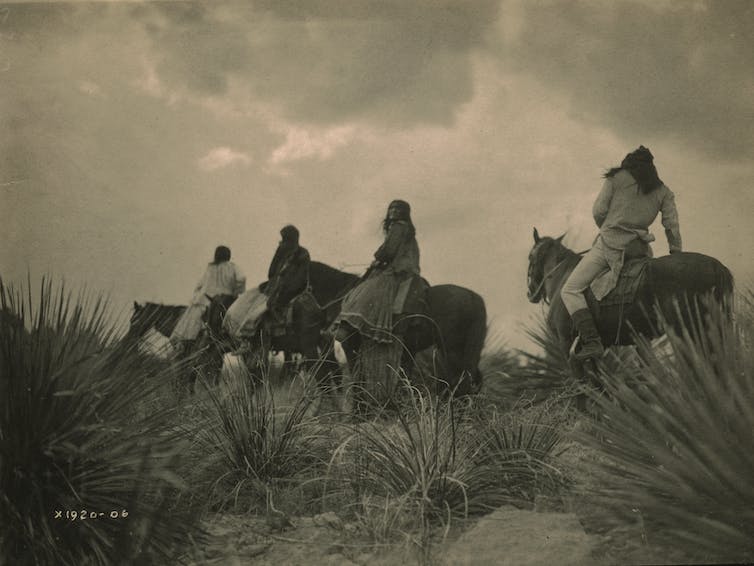 Even as Apache Indians were pushed from their lands, their connection to those places endured – and endures. Edward S. Curtis/Library of Congress Prints and Photographs Division

Just before the sun rose over Arizona on April 30, 1871, gunfire woke an encampment of Apache Indians belonging to the Aravaipa and Pinal bands. The Apaches had surrendered to the U.S. Army at Camp Grant and were supposedly under its protection. But a few raids in the area, likely committed by unrelated Chiricahua Apache bands, inflamed leaders in nearby Tucson who assembled a group of vigilantes. They attacked the encampment with guns and clubs. Within hours, some 100 Apache lay dead – mostly women, children and the elderly.

All of North America belonged to indigenous peoples before immigrants from Europe arrived. According to one study of the lower 48 states, the U.S. government and its citizens took around 1.5 billion acres from Native Americans between 1776 and 1887. Government officials and settlers seized the land in many ways – through war and violence, purchase and trade, bribery and trickery, treaties and sharing, debt and bondage. Once removed from their homelands, most tribes were concentrated on reservations, the leftovers of colonial greed.

Even after being forcibly confined to reservations, Native Americans continued to lose more land. For example, the Dawes Act of 1887 allowed the U.S. president to break up reservations by dispersing communal lands and allotting parcels to specific tribal members. The “surplus” land was then sold to non-Indians. Through this law alone, 100 million more acres were lost.

After the Camp Grant Massacre, the Aravaipa and Pinal fled to the wilderness. Eventually, most regrouped about 60 miles north, where the U.S. government was forming the San Carlos Reservation. That reservation offered little refuge, as the government kept shaving down its size. In the next several years, some Aravaipa and Pinal tried to return to their traditional lands to the south. For example, the Apache leader Eskiminzin established a legal homestead not far from the massacre site. In 1887, he was chased out by Anglos who threatened to murder him and his family.

Over the decades, Apaches from the reservation traveled to their southern territory for hunting, gathering plants and performing ceremonies. But eventually, more non-Apaches arrived and erected fences and gates, cutting off Apaches from their traditional lands. 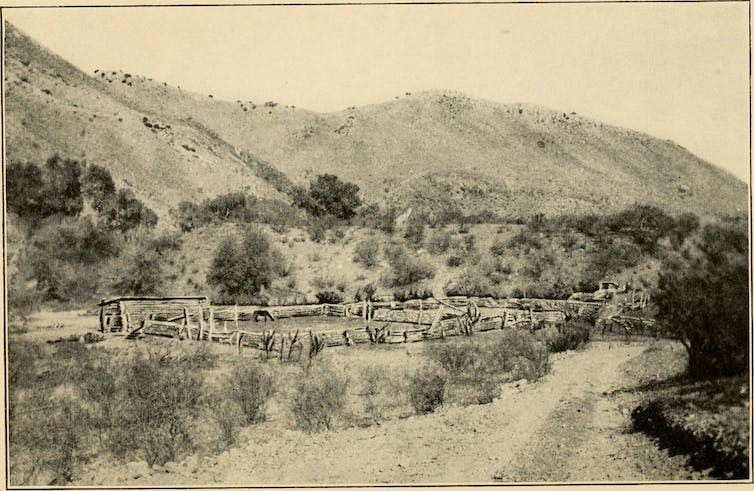 Anglo ranchers in Arizona fenced off land that had been Apache. John Henry Cady and Basil Dillon Woon

And yet, Apache connections to their broader homeland has endured. When colleagues and I conducted an anthropological study of southern Arizona, we found many Apaches maintain deep bonds to their ancestral homelands through stories, place names, ancestral sites and plant-gathering areas.

I have also seen this in my work with the Hopi Tribe. While most outsiders could easily believe the Hopi Reservation in northern Arizona contains their cultural world, Hopis look out and see Hopitutskwa, their vast homeland. They have fought the use of reclaimed sewage water on their sacred San Francisco Peaks 100 miles away. They worked to get another revered point, Mt. Taylor, in New Mexico, listed as a traditional cultural property. They want to see their ancestors’ homes protectedwithin Bears Ears National Monument, in Utah.

Native American reservations rarely encompass a tribe’s entire cultural landscape. Rather, their traditional lands, more often than not, are where people like you and I make our homes.

The possibilities of land acknowledgment

As I started doing land acknowledgments before public talks, I worried whether I was succumbing to liberal guilt, imagining that a version of political correctness could atone for centuries of history that cannot be undone.

I’m not alone. Despite, or perhaps because of its increasing popularity, some have criticized the growing practice of land acknowledgment. Even advocates of indigenous peoples have warned that “the scripts can be disingenuous token gestures, a symbolic way for settlers to appease First Nations without taking meaningful action.”

Reconciliation with indigenous peoples will require work: improving education, creating economic opportunities, protecting sacred places and much more. Confronting the past in all its beauties and horrors does not replace these efforts, but helps animate them.

We can begin by simply saying, “We respectfully acknowledge that we are on the traditional land of the ______ People.”

To read the original article and related commentary, follow this link to The Conversation website.  http://theconversation.com/ive-started-acknowledging-the-people-who-lived-on-this-land-first-and-you...  Article used by permission.