April Temperature Outlook: Warm in the North and East Warm temperatures are expected to become more persistent and widespread in the northern and eastern United States in April as the southern and western U.S. experience near-average conditions for the month.

The best chance for far-above-average warmth, when looking at April as a whole, is in the eastern Great Lakes, Northeast and mid-Atlantic, according to an outlook released Monday by The Weather Company, an IBM Business.

Above-average temperatures are also likely over a broad swath from the nation's northern tier into the Midwest and parts of the Southeast. 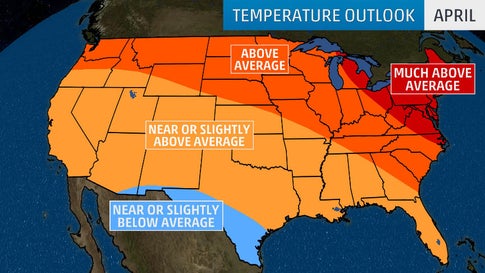 April 2019 temperature outlook from The Weather Company, an IBM Business.

"We’ve made warmer changes to the April forecast across the Plains and eastern U.S. given good agreement amongst the medium-range and sub-seasonal models and our current suite of forecasts, although there is some concern about cooler risks across the central U.S.," said Dr. Todd Crawford, chief meteorologist at The Weather Company.

Near-average or slightly warmer temperatures are predicted from the West Coast to the central and southern Rockies, southern Plains, Gulf Coast and Florida.

An above-average snowpack was present across much of the northern U.S. in March, which typically yields a colder April in the northern Plains, according to Crawford's research.

"So there is clearly a cooler risk to temperatures in those areas that have already been cool during February and much of March, and we are a bit worried about that possibility," Crawford said.

Week-to-week variation in temperatures is likely in April, so each individual week may not match up precisely with the temperature outlook map above, which projects an average over the entire month.

Average high temperatures in April range from the 50s across the northern tier to the 70s in much of the South. Northern Maine typically holds in the 40s, while parts of Florida, southern Texas and the Southwest commonly reach the 80s. 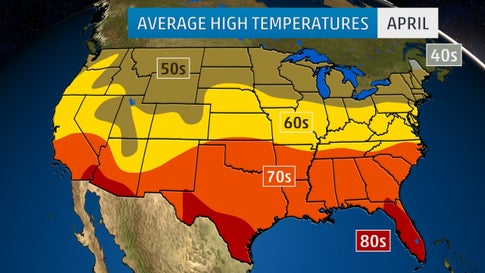 Nights can still be chilly in April, as lows often dip into the 20s and 30s in the North and the Rockies. Low temperatures in the 40s are average for April from the mid-Atlantic to the central Plains and parts of California. Lows in the 50s are common in the South, with 60s typical in parts of Florida and South Texas. 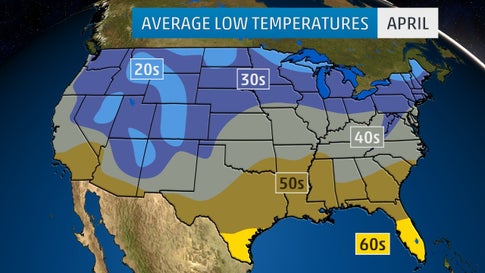