For years, Traverse City photographer Gary R. Ennis has been capturing Michigan in all its four-season glory. His vibrant collections overflow with forests flashing their autumn color, vast fields of sunflowers, and beach town scenes where we wring every last, sweet drop out of summer.

But it's his pictures of winter surfers during a recent storm on Lake Superior - and of a professional kayaker's daring drop over a roaring Tahquamenon Falls - that have sent thrills across social media in recent days.

Ennis has agreed to share many of his winter adventure images with our readers, and talk about what it took to get those shots.

"I'm primarily a landscape photographer, but I've always had a huge interest in extreme sports," Ennis said. "I envy what they do. I have a lot of respect for them. And for me, it's a huge challenge (to photograph extreme sports) because they are moving. But every time I do it, I still learn something new."

His recent adventures had him photographing his friend Marcelo Galizio, a native of Brazil who is "test pilot" for LiquidLogic kayaks. Galizio was in Michigan for a few days after Christmas. He surfed an angry Lake Superior on waves whipped up by gale force winds, joined by U.P. icon "Surfer Dan" - Marquette's own Dan Schetter.

After grabbing those shots, Ennis and his camera equipment headed down to Tahquamenon Falls State Park, where last weekend Galizio planned to run his 18th trip over the Upper Falls - his first winter attempt.

We'll delve into the details, as we see these adventures from Ennis' unique perspective, behind the lens of his Cannon camera. 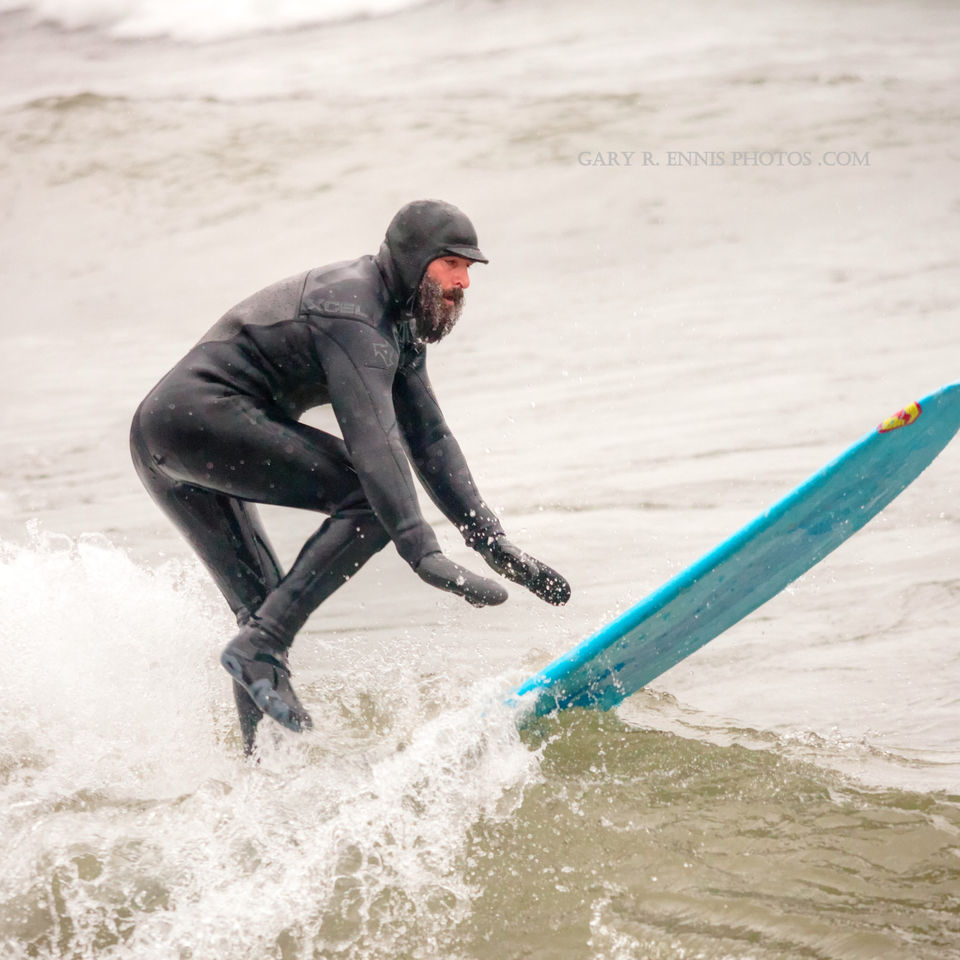 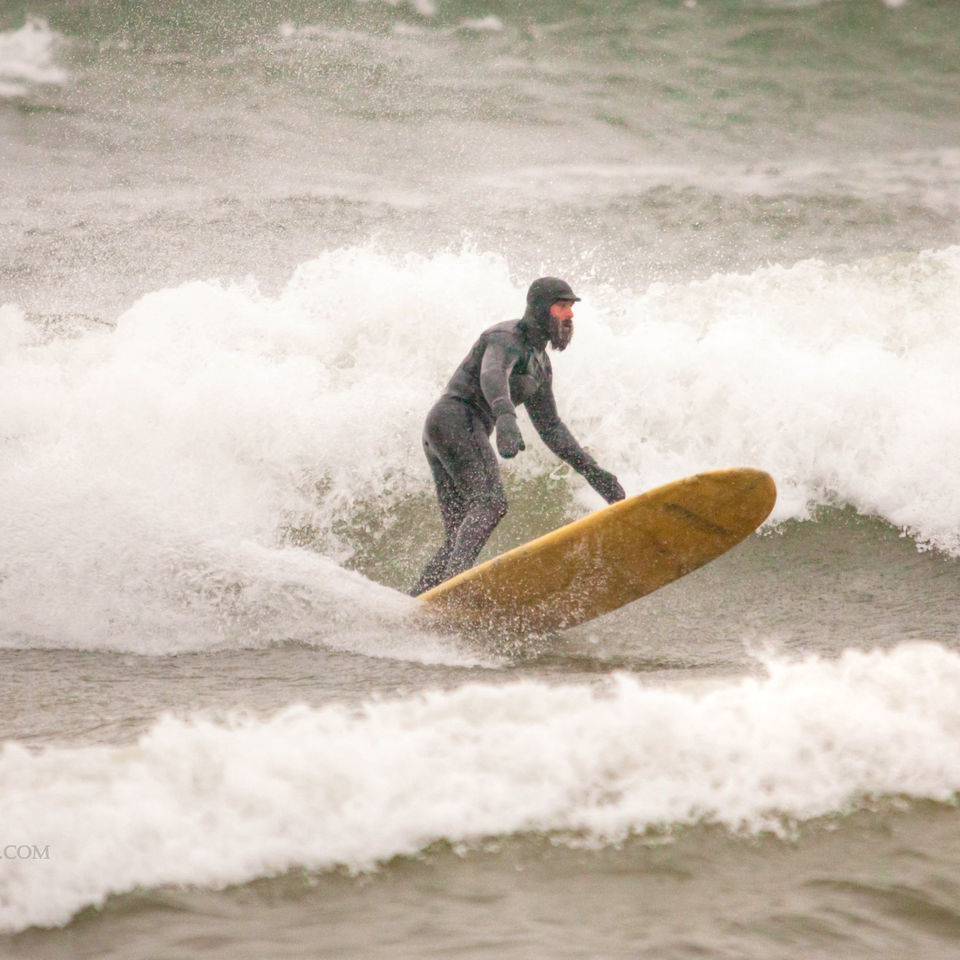 Surfers had winter storm conditions on Lake Superior on Dec. 28, 2018. 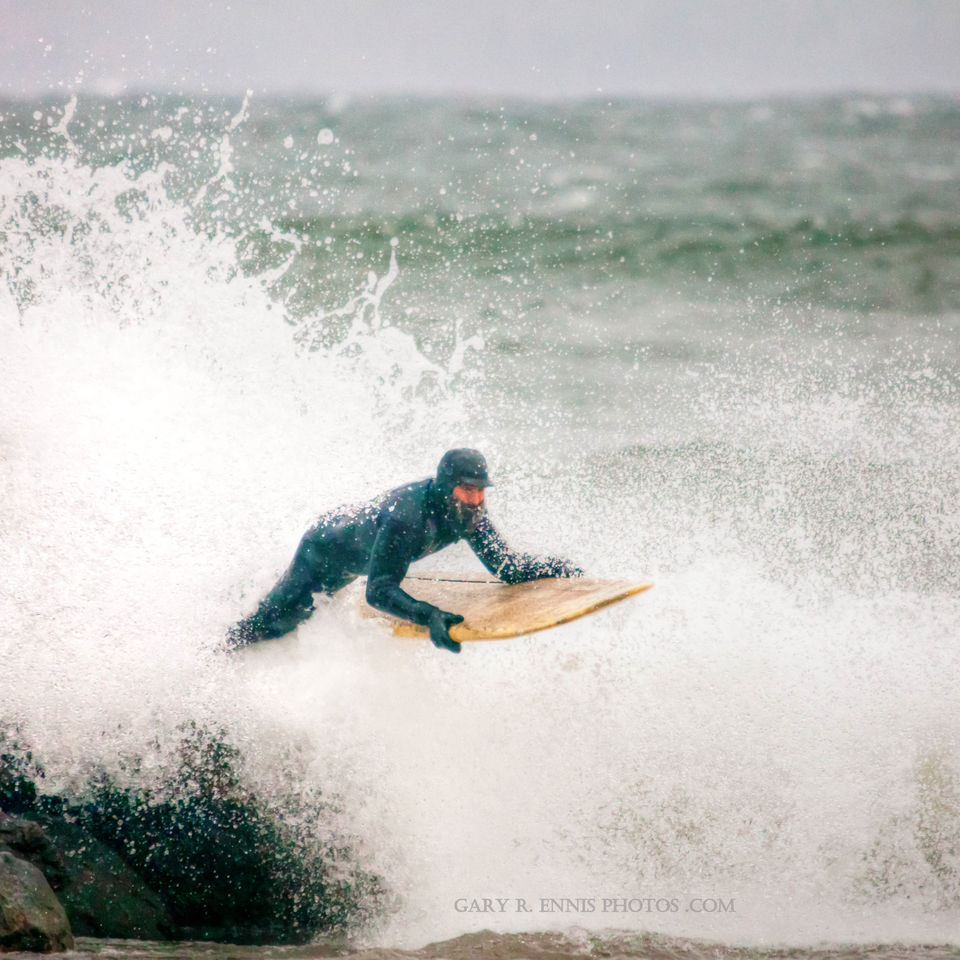 Waves were forecast to reach 14 feet on Lake Superior that day, but Ennis said they topped out closer to 20 feet tall. 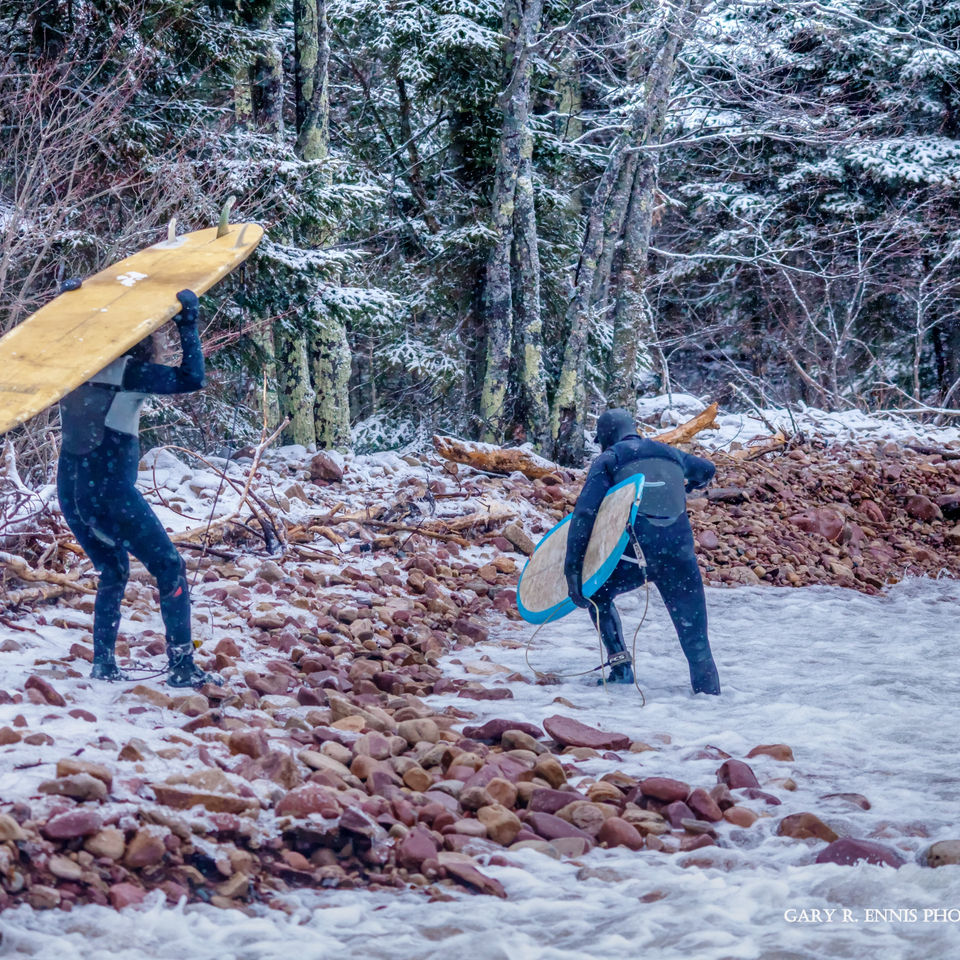 With his glorious and photogenic ice beards, Dan Schetter has earned his "Surfer Dan" celebrity moniker.

The Marquette native has been surfing Lake Superior for more than 20 years.

He's lived abroad, surfed in Japan and Hawaii, but is happy to call The Great Lakes his home. 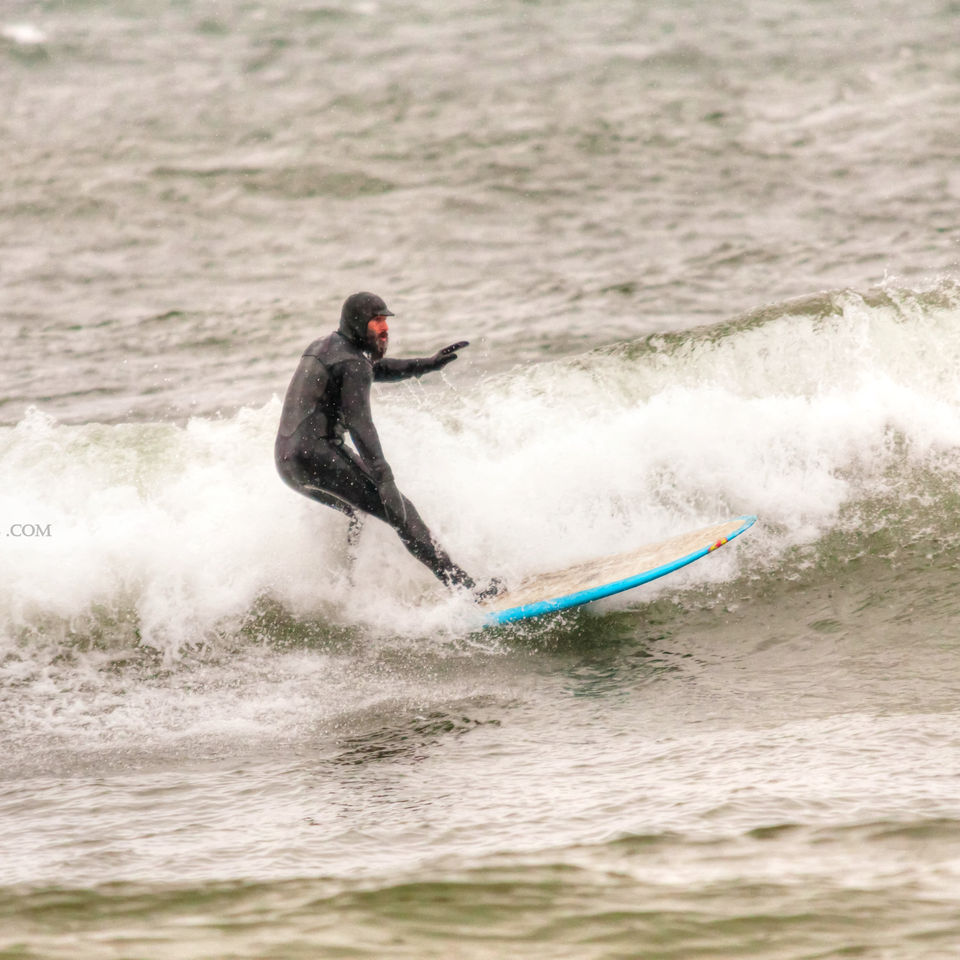 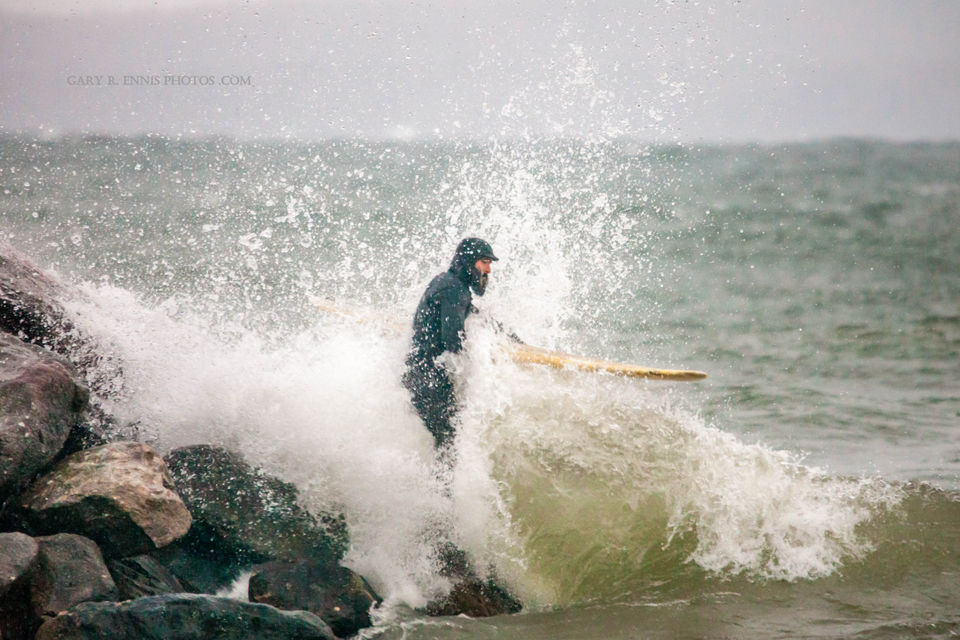 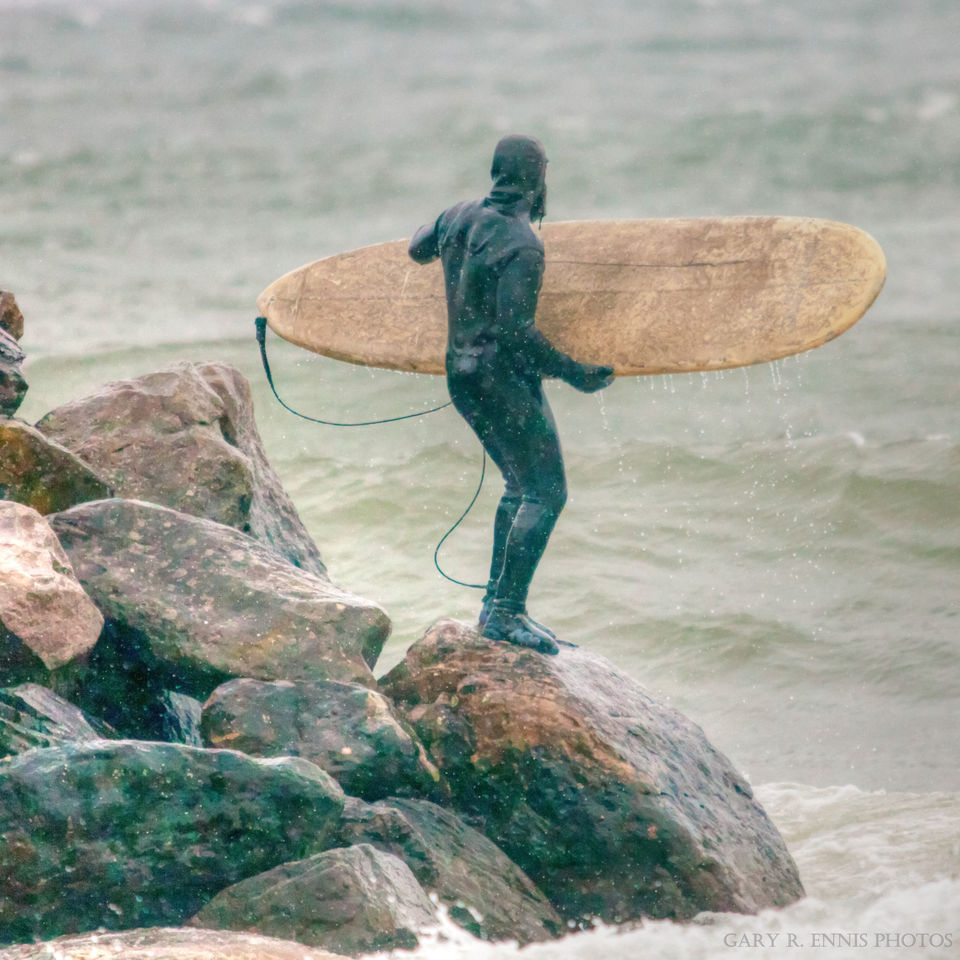 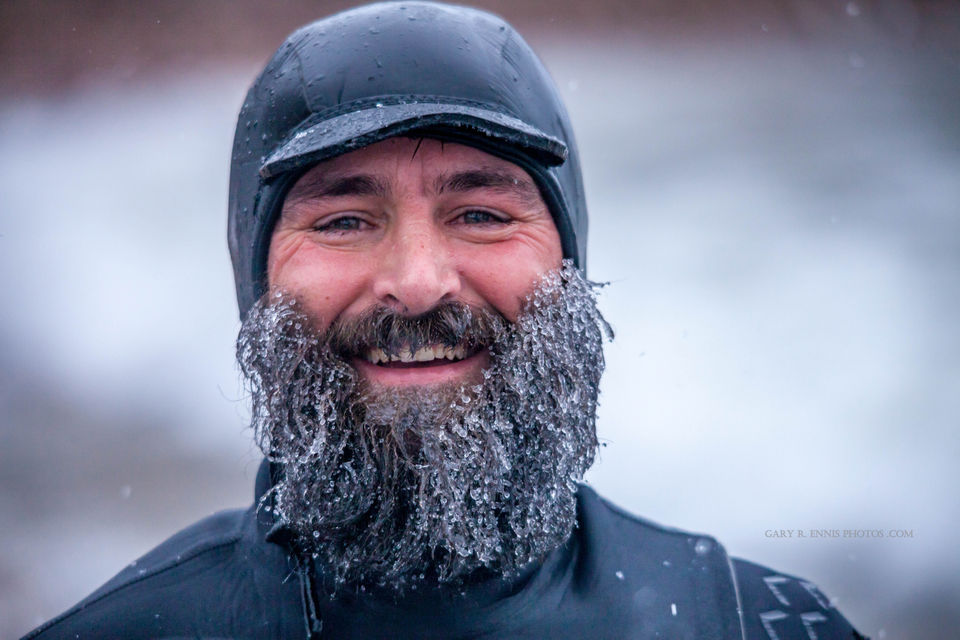 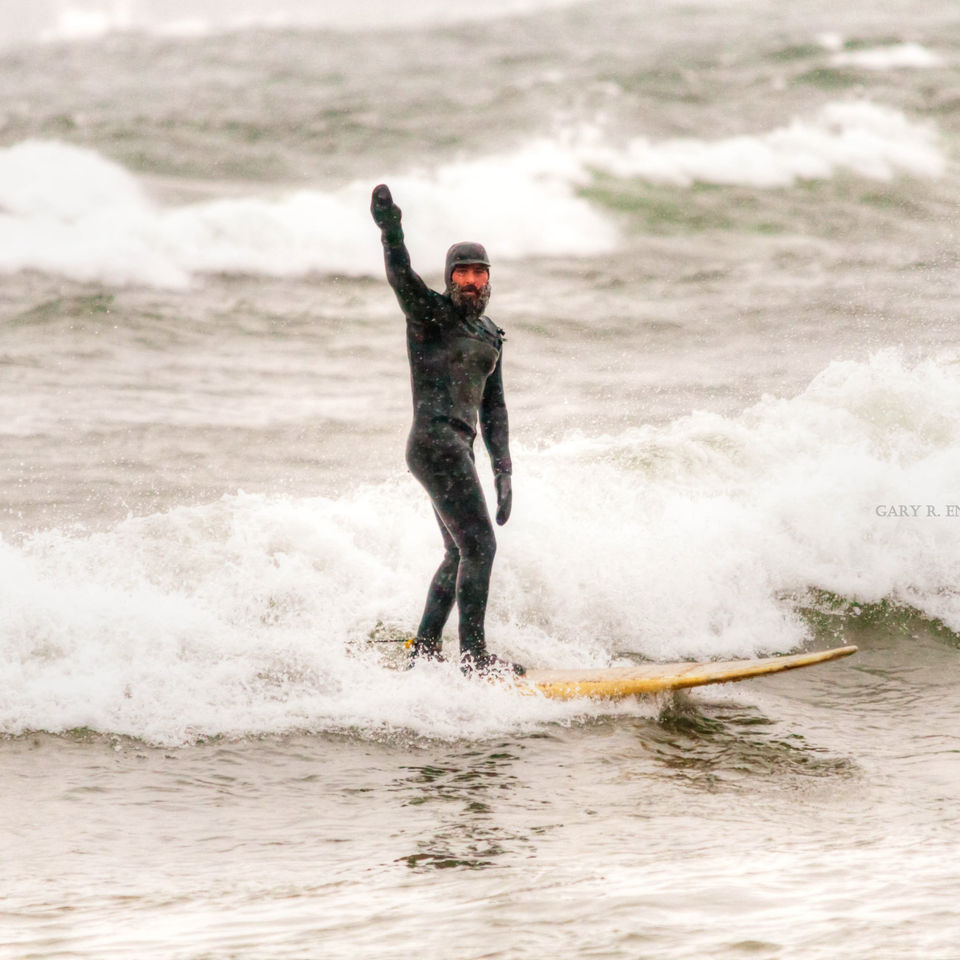 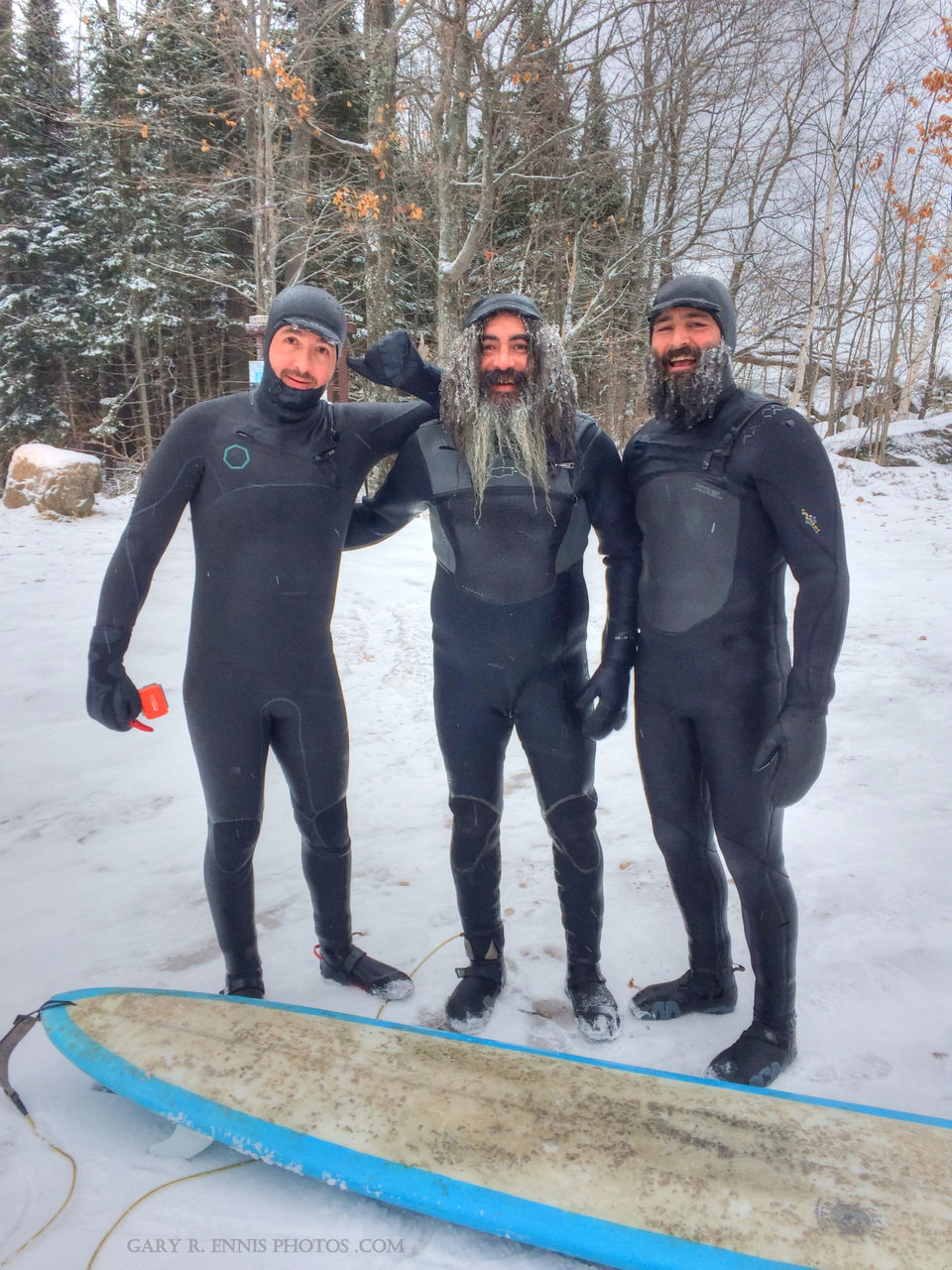 Courtesy of Gary R. Ennis Photos  Surfing trio.
Getting the Gang Together

Ennis said he was excited to hear that his friend Marcelo Galizio, he of the stunt-loving, extreme sports moves, was headed up to the U.P. for a few days.

Ennis met Galizio a few years ago, and has loved documenting his adventures when the Brazilian's travel plans allow. Galizio has developed an affinity for the U.P.

On Dec. 28, Ennis went up to stay at the Roam Inn in Munising, using it as a home base while he documented Galizio and Surfer Dan's adventures nearby.

Of course a winter storm was blowing across the biggest Great Lake. The two surfers were joined by another friend, and the trio headed out to one of Surfer Dan's many secret spots along the Superior shoreline.

"There were 20-foot waves. It was pretty incredible," Ennis said of the weather that day.

Staying on shore, Ennis was layered up with thermal everything. He says it's important to protect his camera battery when it gets that cold. When he's not shooting, he'll take the battery out and put it in his pocket to keep it from draining.

That day, the surfers and their cameraman stayed on the lake for about three hours. 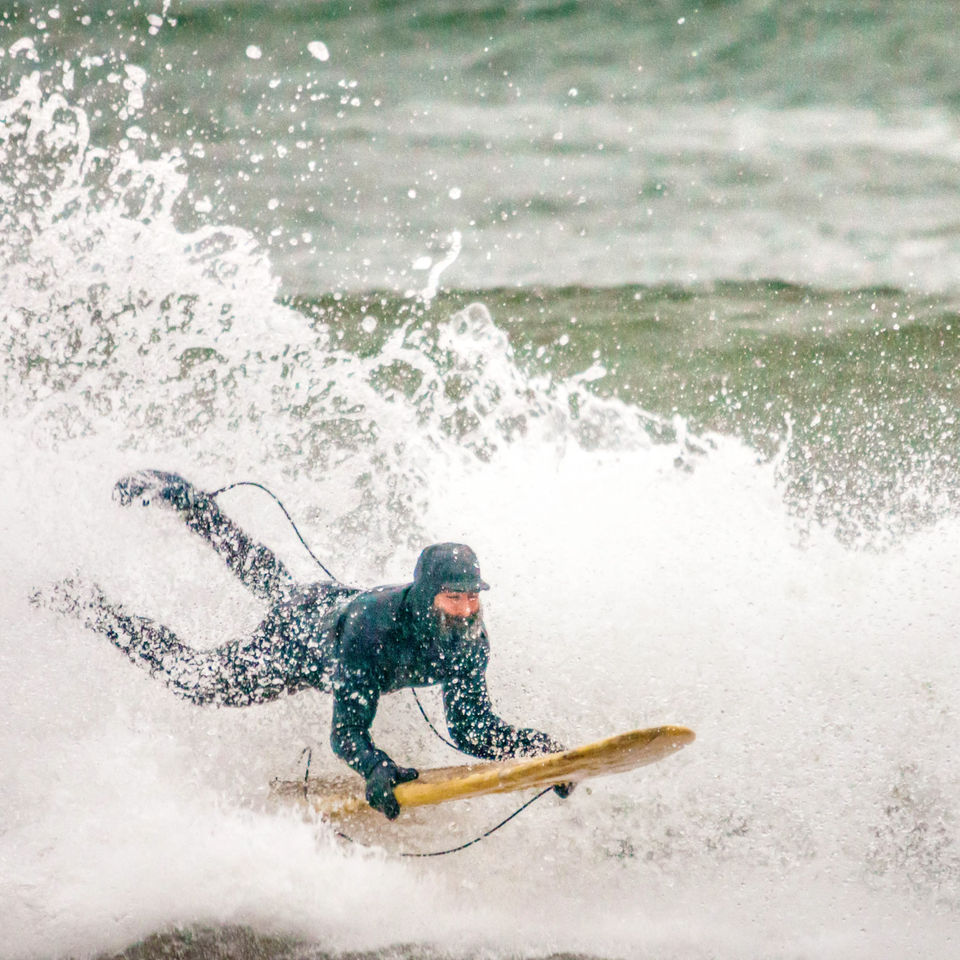 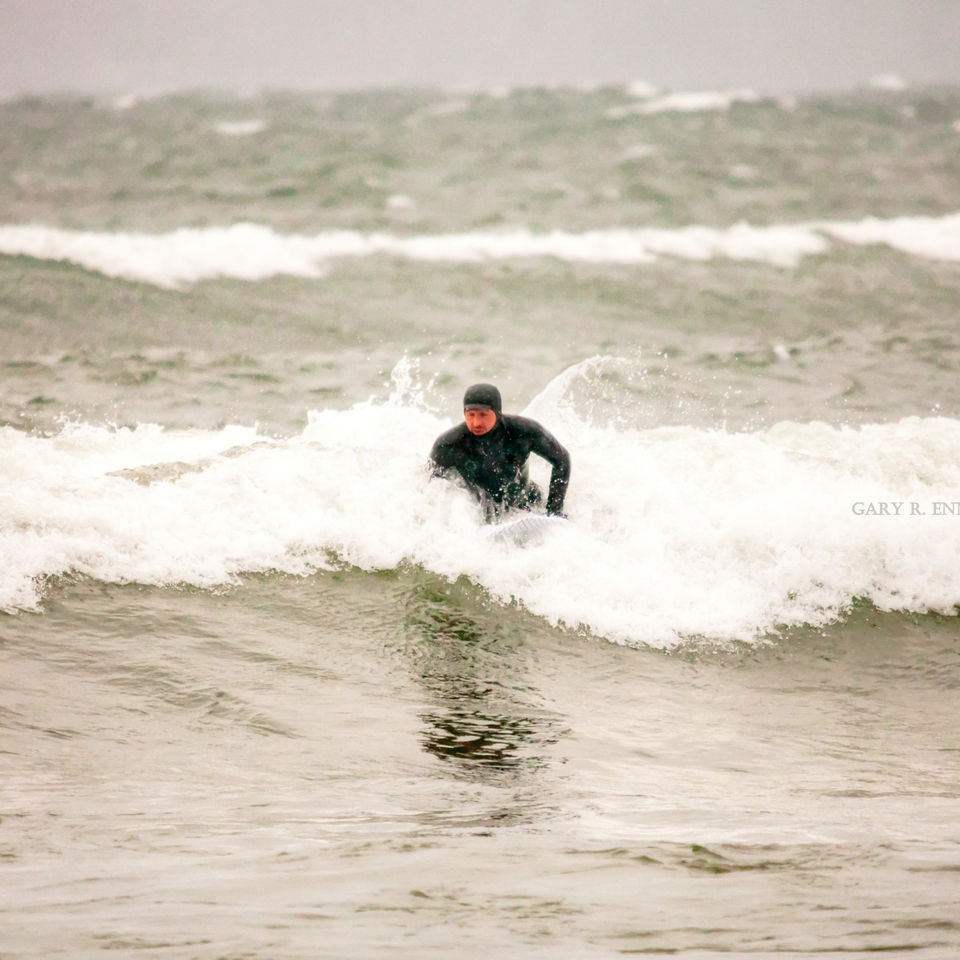 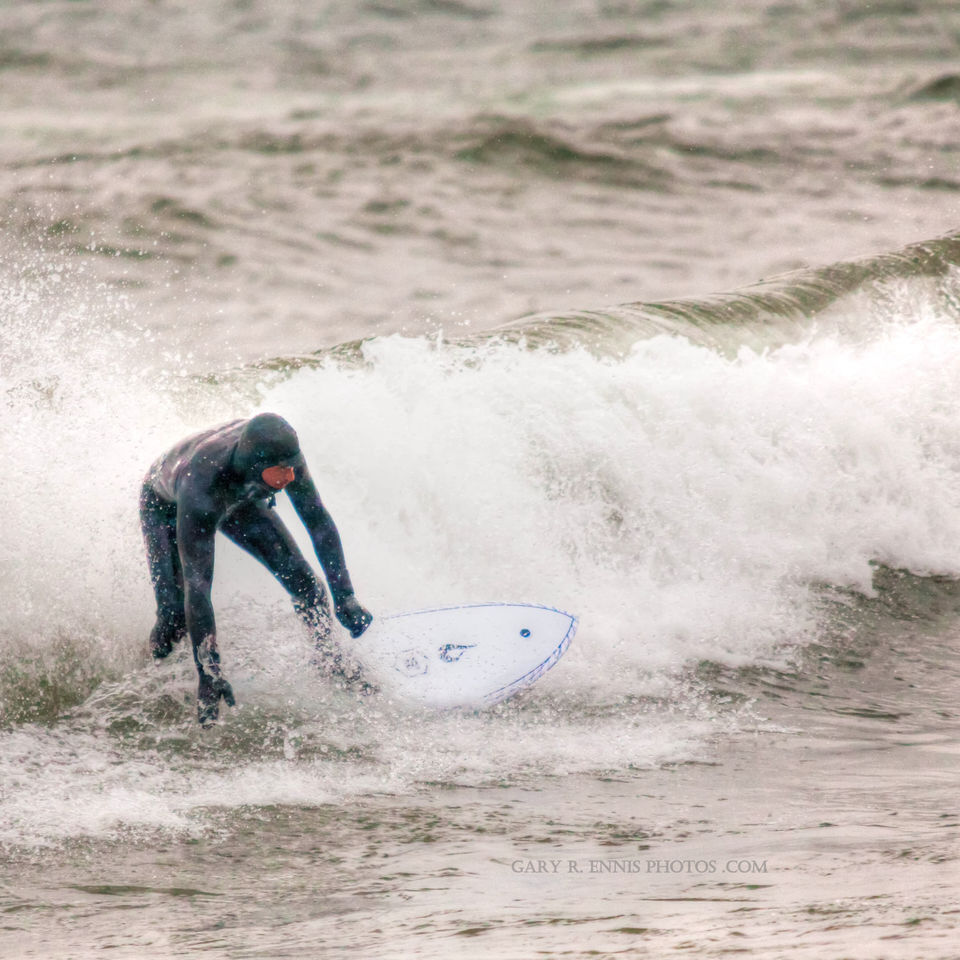 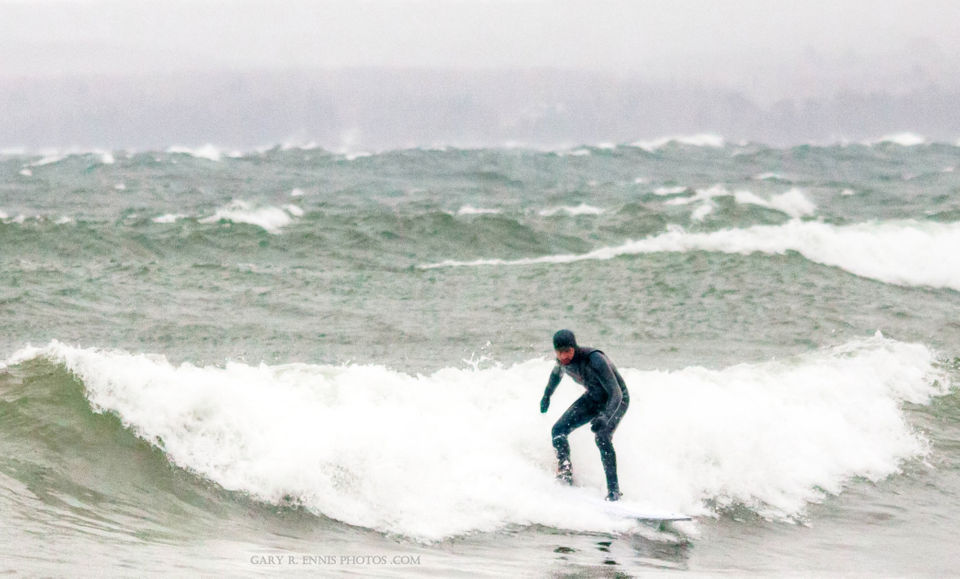 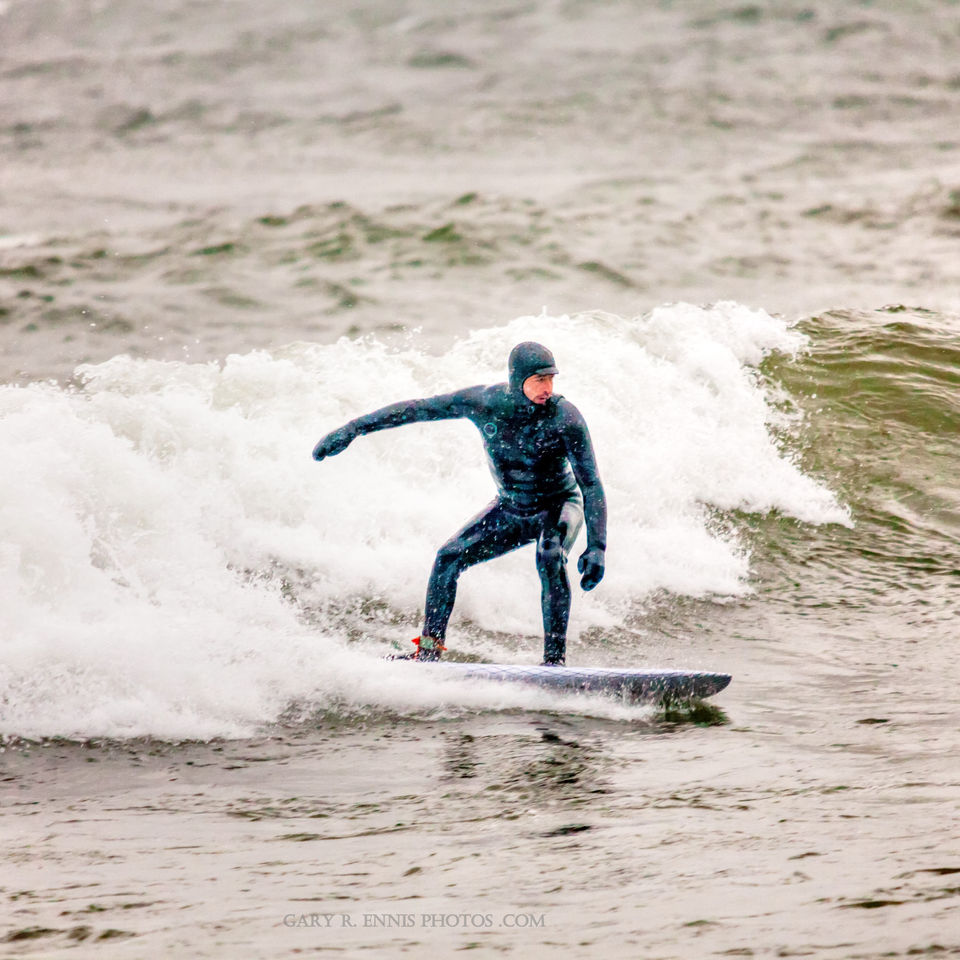 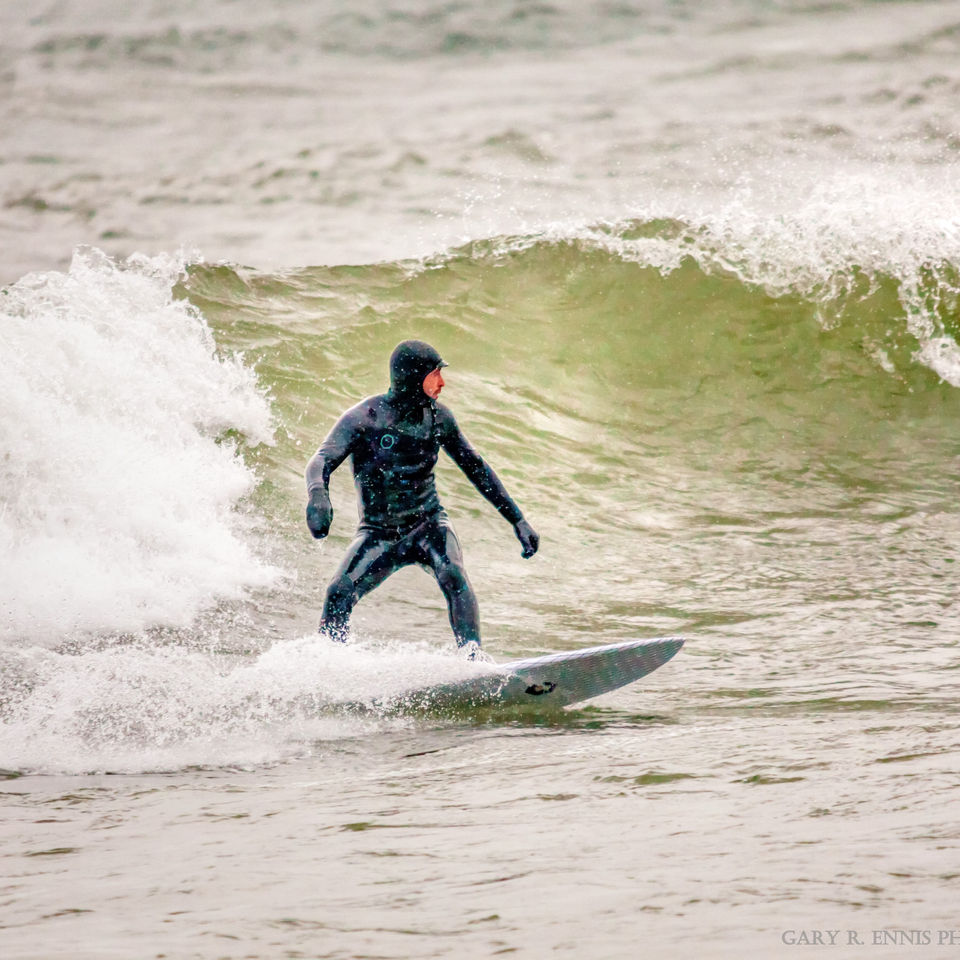 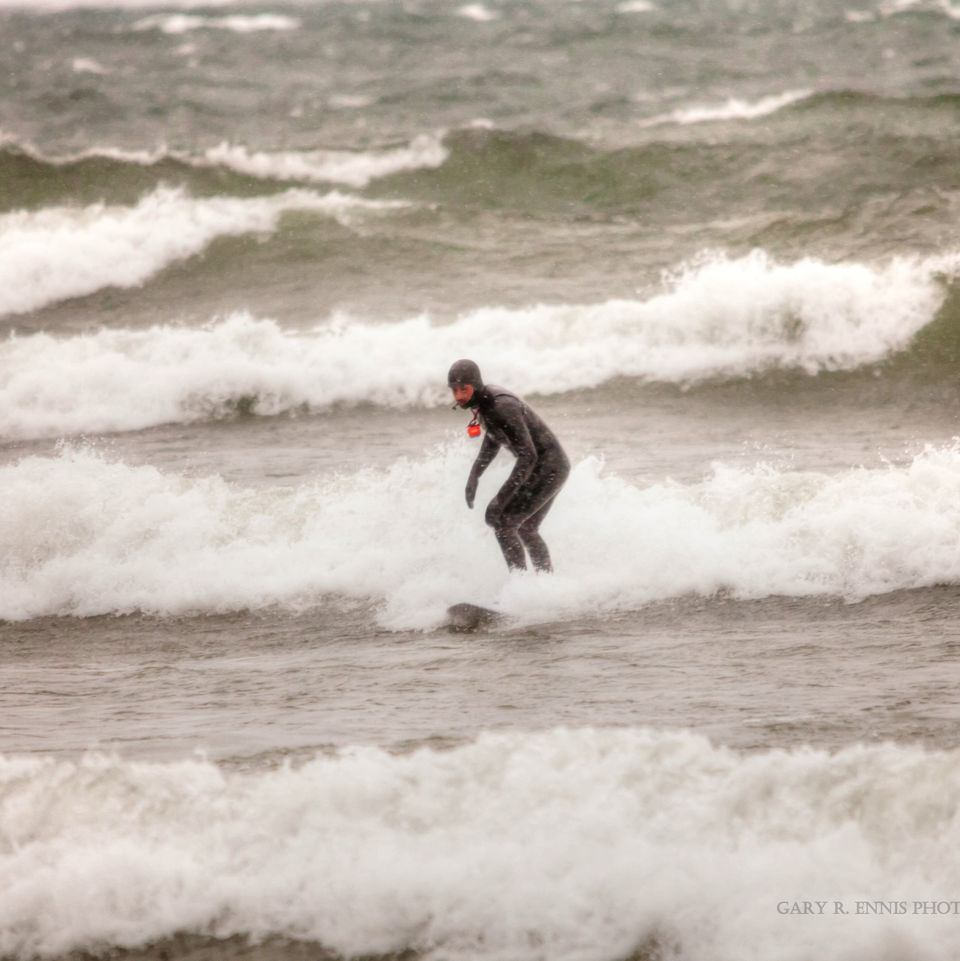