While sitting on chairs around an old wooden table, a warm wood fire slowly burned in a stove, and a gas lantern lit up the small cabin room as two friends and I discussed our snowshoe hiking plans for the next day. Outside the cabin it was snowing. There was nearly a foot of fresh snow. Temperatures were in the teens by day and single digits by night.

Next door stood a woodshed equipped with a saw and axe, and we had about a 30-foot walk to the outhouse. Our vehicle was parked 70 yards away with a single-track trail leading to the cabin, as we hauled all our gear for our stay. Snow-laden balsams lined the trail and dotted the landscape around our camp.

This past February, my long-time camping and snowshoeing friends, Tom Link and Tom Clark, and I spent three days in a rustic cabin at Upper Michigan’s Porcupine Mountains Wilderness State Park. 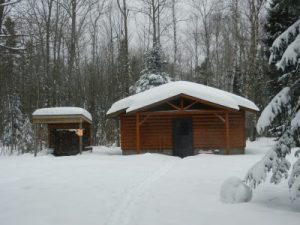 In the cabin, there was no electricity, no indoor plumbing or water…. just bunk beds with mattresses, table and chairs, a kitchen counter with cupboards and a wood burning stove. The State Park rents out four rustic cabins in the winter. Sixteen cabins in total are available during the other seasons. Our cabin this winter was Gitche Gumee.

The Porcupine Mountains are a series of relatively small mountains compared to mountains out west or east. They lie in northwest Upper Michigan and rest along the south shore of Lake Superior, the largest of the five Great Lakes. The highest point is Summit Peak at elevation 1,952 feet above sea level.

The Porcupine Mountains Wilderness State Park includes 60,000 acres of pine, hemlock and hardwood. Of those acres, 35,000 are an uncut virgin forest. According to Michigan DNR, the federal government recognized the area as a National Natural Landmark.

In addition to mega beautiful trees, the park is home to inland lakes and ponds, miles of rivers and streams, rushing waterfalls, a long stretch of Lake Superior beach and magnificent flora and fauna. Black bears are plentiful in the park. But fortunately for us, they were hibernating during our visit.

For recreation, the park has 90 miles of hiking trails, a campground, backcountry camping, rustic cabins and wilderness yurts. Highlights include a visitor center with interpretive programs and an exhibition hall (open mid-May to mid-October), Summit Peak observation tower and an 18 hole disc golf course open during the warmer seasons.

In winter, there is a ski hill for downhill skiing and snowboarding, 42 KM of cross country ski trails with two warming shelters, and lantern lit snowshoeing events held at the ski hill. Snowshoers have many acres of land and trails to snowshoe, but need to stay off the ski trails.

Our Experience in the Porkies

The “Porkies,” as it is often referred, was definitely a Michigan winter wonderland when we were there this past winter. Our goal for our short stay was to snowshoe up the Escarpment Trail and catch a view of the popular and scenic 240-acre Lake of the Clouds below.

The main route to view the lake is via the 4-plus mile Escarpment Trail that follows a ridge overlooking Lake of the Clouds. Author Eric Hansen in his book, Hiking Michigan’s Upper Peninsula, stated that the Escarpment Trail is “a ridge walk offering a parade of sweeping views.”

Over the Last 15 Years

Tom, Tom and I are now in our late 60’s (ages 66 to 68). In 2006, we made a similar winter journey with four other friends, camping at Whitetail cabin that sits just yards away from Lake Superior’s shore. That year, we hiked about two miles to get to the cabin, pulling our gear on sleds and using backpacks.

Our snowshoe hike up the Escarpment Trail rewarded us with a breathtaking view of the snow covered Lake of the Clouds on a clear winter day. Although we were younger then, we were hoping to see the same view of the lake on this year’s journey.

Also, in the early 2000’s, Tom Link and I hiked nearly three miles to camp at Union River cabin on two occasions. In 2003, I took a group of college students to the Porkies and camped in and around Union River cabin. Some students stayed in the cabin while others camped nearby in tents and snow shelters. I camped in my tent that night.

And in 2010, Both Toms and two others stayed at Whitetail and summited the Escarpment Trail. However, it was foggy and they could not see the lake below. I did not make that trip due to having shoulder surgery.

So given these several trips, the Porkies in winter were no stranger to us three. This year on the morning of our hike, we were excited to attempt the Escarpment Trail and view the awesome Lake of the Clouds once again. 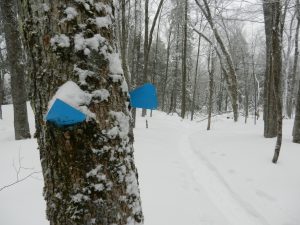 We drove a short distance on Michigan’s Highway 107 to a parking area where 107 was barricaded. From there, the backcountry highway was snow-covered and traveled only on snowshoes, skis or by snowmobile. Several snowmobiles passed us by on our two-mile hike to the trailhead.

The temperature was in the middle teens, and it was hazy with occasional snow flurries. We finally approached the trailhead to Government Peak Trail, which was our entry point to get to the Escarpment Trail. Government Peak only went a short distance. We then turned right and started up the seemingly 45-degree angled Escarpment.

Following blue trail markers, we continued to climb for over three-quarters of a mile. In some areas, the snow was so deep that we had to kick-step into the hill to keep from slipping. We took turns breaking trail and applied all of our energy to continue our ascent.

Finally, we recognized stands of pines near the summit. We only wanted to reach the top and look down on the lake, then return downhill. As we made our last stretch to the top with anticipation of a grandiose view, we were surprised when greeted with haze and clouds. We were in the clouds. The only view we had beyond the trees that we stood among were clouds. To our disappointment, we could not see Lake of the Clouds.

However, we were not disappointed in our six mile snowshoe hike, with roughly one of those miles climbing up and one going down a small mountain in challenging deep snow. Given our ages, we were quite proud of our accomplishment. Although we did not see the lake, we did achieve our destination. And, we thoroughly enjoyed our time spent in this magnificent wilderness park with all the natural beauty it provided us. 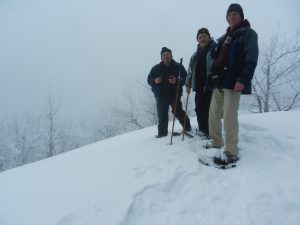