What a wondrous miracle, to wake up, memory muddled, slightly unmoored, with just the task of relearning yourself, your friends, your hometown nestled along the ruggedly beautiful shores of Lake Superior. Everything that once was rundown and rusted suddenly seems new and exotic, buffed to a striking shine.

Such is the plight of Virgil Wander, who gives Leif Enger’s new novel its name and is one of the most engaging protagonists I’ve encountered in years. Wander is an orphan, a fallen seminarian, a movie-theater owner. After his car plunges off a cliff into the icy waters of the lake below, his memory and capacity for language are compromised.

The world of fiction has always rewarded the obsession, the fetish, and “Virgil Wander” is jam-packed with such eccentricities — baseball, surfing, beachcombing, fishing, classic films, taxidermy, Jeep Wagoneers. Reading the novel is like walking into your beloved uncle’s bachelor pad: Every page is packed with curios and brimming with delightful nostalgia. But the nostalgia is well modulated. As Virgil’s memory begins to resolve, so does the glimmer of his small town begin to fade. Greenstone, Minn., is a Rust Belt port, a little pockmark along Highway 61 up to Canada. Is it beautiful? Sure, but mostly because of the lake and seasons. Its monolithic ore dock is an everyday reminder of the town’s decay, as are the vacancies along Main Street and Virgil’s own derelict movie theater. 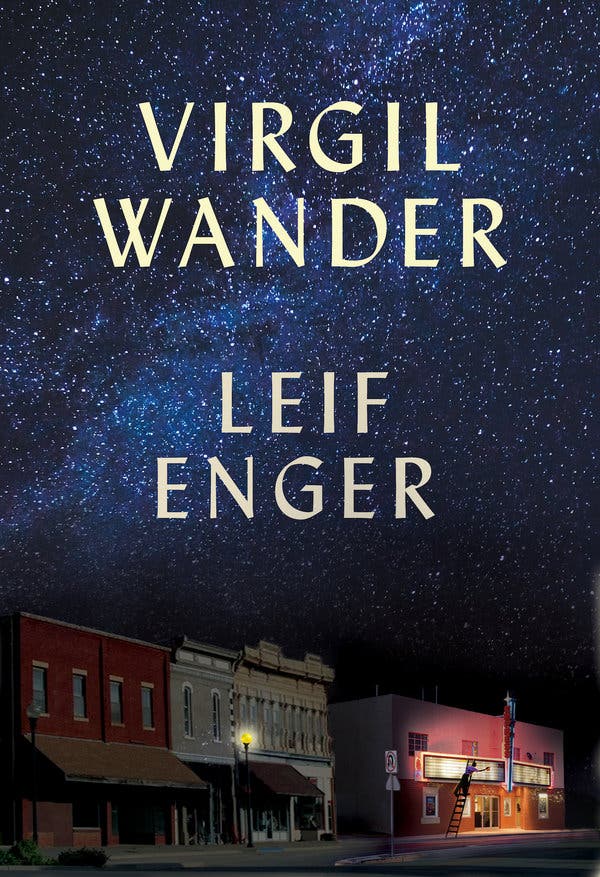 Against this richly drawn background, Enger weaves in a few different strands, including some that explore notions of fatherlessness and orphanhood. Every narrative thread is infused with the magical. Greenstone is a place where phantoms lurk out on the big lake, where old men fly kites into the fangs of lightning and where there’s always an outside chance Bob Dylan might stroll onto the Main Street stage. Enger has endowed Minnesota’s North Shore with a luminousness reminiscent of Annie Proulx’s Newfoundland.

It is a strange time to live in small-town America. For those of us far from America’s big cities, there is a sense that we’re somehow culpable for Trump, that we don’t get it, that we’re behind the times. There is a mystery to why we persist, why we stay when everyone else leaves. Enger, I think, feels that the hangers-on believe. They’re fighters and romantics; they’re outdoorspeople. Many of them are simply determined to avoid lights and noise and crowds.

Enger’s first novel in 10 years marks him as a foremost stylist. His prose is rhapsodic, kaleidoscopic and — I’ll say it — enviable. Even more enviable is the rare feat of writing a comedic literary novel that is also a page-turner. He’s performing on a trapeze that not many others have even reached for. That said, some of Enger’s stylistic choices come with consequences. I’ve lived in the Midwest my whole life and never once, for example, heard a 16-year-old gas-station attendant utter the word “ghastly.” Moments like this pull the reader out of an otherwise spellbinding story.

Enger deserves to be mentioned alongside the likes of Richard Russo and Thomas McGuane. “Virgil Wander” is a lush crowd-pleaser about meaning and second chances and magic. And in these Trumpian times, isn’t that just the kind of book and protagonist we’re all searching for?

To read the original review and other NY Times book Reviews, follow this link to their website.  https://www.nytimes.com/2018/11/02/books/review/leif-enger-virgil-wander.html
Arts+Culture