Alexis Rockman Portrays the Great Lakes in Glory and Decline In Alexis Rockman’s large mural “Spheres of Influence,” it’s hard to turn away from the dead waterfowl floating belly up, its head hanging underwater near a depiction of type E botulism, which has poisoned thousands of water birds.

The painting is one of five in his coming show, “Alexis Rockman: The Great Lakes Cycle,” starting at the Grand Rapids Art Museum in Michigan from Jan. 27 to April 29 and then traveling to Chicago, Cleveland and Minneapolis.

When Mr. Rockman began the series five years ago, “environmental issues were dire enough for the lakes,” he said. But now, President Trump has asked in his 2018 budget to defund the Great Lakes Restoration Initiative, which since 2010 has provided millions of dollars in federal funds to clean up and protect the lakes.

And earlier this month, a giant algae bloom covered more than 700 square miles of Lake Erie. Algae blooms, which have long been a problem for Lake Erie and can be toxic, are typically caused by fertilizer use on the region’s farmland.

So now his show is “in some ways a call to action,” said Dana Friis-Hansen, director of the Grand Rapids museum, who initiated the project with Mr. Rockman.

For Mr. Rockman, the “Great Lakes Cycle” is a natural fit. “I have been making paintings about ecological history and natural history for years,” he said. “And I looked at the map, and I thought, the Great Lakes are a fascinating place.”

The cycle is made up of five oil, alkyd and acrylic paintings that are 6 feet by 12 feet and follows in the “scientific tradition of naturalism, but there’s humor in them and dark fantasy,” said Daniel Schulman, the director for visual art for the Chicago Department of Cultural Affairs and Special Events. “Everything is overly detailed. There is almost a magical realism.”

The Chicago Cultural Center, where Mr. Schulman oversees exhibitions, will host the show from June to September 2018. 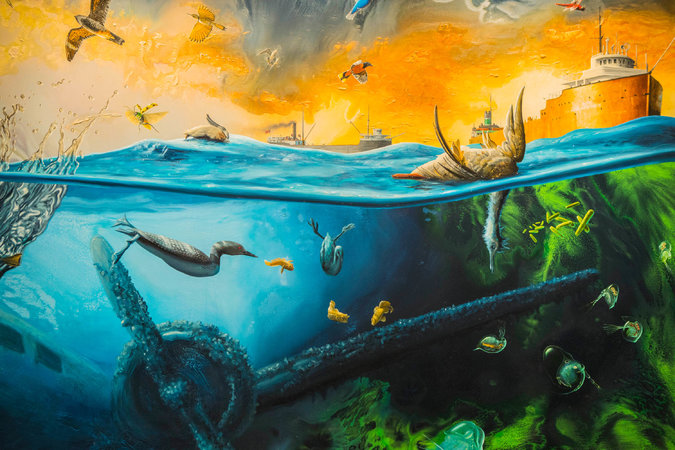 A detail from “Spheres of Influence” showing dead waterfowl and the Northwest Orient plane that crashed into Lake Ontario in 1950. CreditHiroko Masuike/The New York Times

Mr. Rockman, 55, whose mother is an archaeologist, perhaps sums up his work best, calling it “natural-history psychedelia.” He is known for bridging the worlds of art and science — his exhibition “A Natural History of Life in New York City,” which was shown at Salon 94 in New York last year, consisted of 75 field drawings of animals and plants from the five boroughs, ranging from the prehistoric era to the present.

And when the director Ang Lee was working on the movie “Life of Pi,” about a young man trapped at sea on a boat with a tiger, he asked Mr. Rockman to be the “inspirational artist” to define the look of the overall film. Among other things, Mr. Rockman did watercolor drawings of hundreds of pictures of ocean life based on natural history and his imagination.

As is typical of Mr. Rockman, he started the Great Lakes project with research. “His process is to ask a lot of questions, read a lot of books,” Mr. Friis-Hansen said. “He synthesizes experiences and conversations with experts to tell a compelling story in paintings. He is a thoroughly contemporary artist. His tools are Photoshop and the internet, and then he leaves it all behind and goes back to oil painting.”

His research included an expedition to Lake Michigan and Lake Superior, following an itinerary devised by the Grand Rapids museum. Over two weeks, he talked to experts, traveled to dunes, joined a charter-boat fisherman and visited the Great Lakes Shipwreck Museum and an abandoned copper mine. He also made visits to other Great Lakes.

One of his most fruitful experiences, he said, was at Northern Michigan University. “I had two meetings in one day, and both of those people became my go-to fact-checking gurus.”

One of those was Jill Leonard, a fish biologist at the university, who sat with Mr. Rockman at a Starbucks for three hours and hashed out the themes of the five paintings.

“I got a phone call out of the blue from the Grand Rapids museum, asking, ‘Will you talk to this artist guy about the Great Lakes,’” she said. “By the time he got to me, he was at the point where he just wanted to sit and talk. We had this great conversation, and then every once in a while he continued to contact me. He’d call and say, ‘I really want to do something about native pollinators,’ or ‘What shows the effect of chemicals? Do you have any photos of sick fish?’”

The paintings, Ms. Leonard said, will become a resource on her university’s website and will include short essays, videos and illustrations. Mr. Rockman also said he would be available to the museum, local schools and institutions for workshops and lectures. 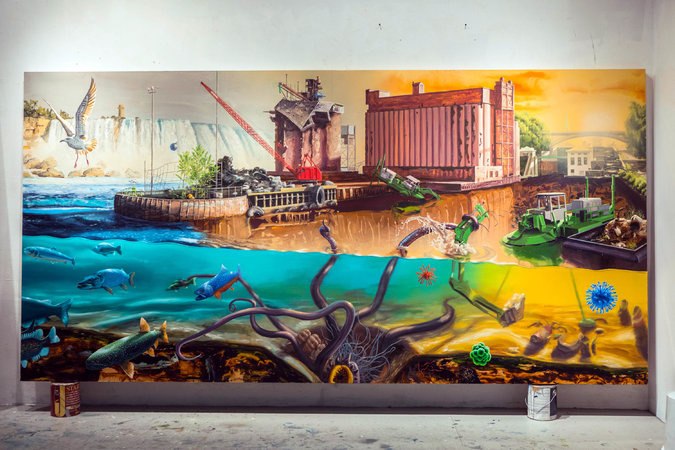 Mr. Rockman’s “Forces of Change” has an octopuslike monster. Small red, green and blue shapes represent bacteria and viruses that, he said, have been a “tremendous force of change in the lakes.”CreditHiroko Masuike/The New York Times

His driving force was to capture the geographical, physical and ecological changes of the lakes over the centuries, but not in a linear way.

For example, the invasive species that have radically altered the lakes, often introduced inadvertently, appear in the painting “Pioneers” as ballast water pouring into a lake. In “Forces of Change,” he paints an octopuslike monster and several much smaller bright red, green and blue depictions of the invisible bacteria and viruses that, he says, have been an unseen but “tremendous force of change in the lakes.”

And there’s the unexpected. Underwater in the foreground of “Spheres of Influence” is a DC-4, the Northwest Orient plane that crashed into Lake Ontario in 1950, while on the horizon is the H.M.S. Queen Charlotte from the War of 1812.

Mr. Rockman’s paintings have “theatricality and overstatement, which is all backed up by how great a painter he is technically,” Mr. Schulman said. The paintings will be shown with keys so viewers can identify the various objects.

The exhibition will also include six 4-foot-by-6-foot watercolors and 30 field drawings. Mr. Rockman uses materials he picked up during his travels around the lakes to create the drawings, such as coal and sand from dunes.

Jill Snyder, executive director of the Museum of Contemporary Art Cleveland, which will show the paintings from October 2018 to January 2019, said the works “bring you into the past, present and future of a locale,” but also addressed compelling global issues.

“There’s a cautionary tale, a moral imperative to his work,” she said. “His new series celebrates the natural majesty and global importance of the Great Lakes while exploring how they are threatened by factors such as climate change, globalization, invasive species, mass agriculture and urban sprawl.”

But is this what people really want to think about when going to an art show? Ms. Snyder said she thought so, especially as the paintings “entertain and illuminate.”

“They don’t hit you over the head as a pedantic lecture,” she said. “There’s a visceral quality to his work that’s seductive and compelling.”

A version of this article appears in print on October 29, 2017, on Page F28 of the New York edition with the headline: The Great Lakes in Glory and Decline. Order Reprints|  Today's Paper|Subscribe