Photo: A log yarder hauls a log up a steep slope where a crew is thinning a 100-acre patch on private land owned by the Nature Conservancy in Cle Elum, Wash. The organization is cutting trees to restore the area’s pine forests and make them more resilient to wildfires and climate change. AP Photo/Elaine Thompson

By Taylor Ganz - PhD Candidate in Environmental and Forest Sciences, University of Washington - The Conversation - October 19, 2022

In the arid American West, wildfires now define summer. Recent years have seen some of the worst wildfires in recorded history. Climate change, the loss of Indigenous burning practices and a century of fire suppression are increasing the risk of larger, hotter and more frequent wildfires.

I’m a wildlife ecologist studying how the presence of wolves and other predators is affecting deer and elk in Washington state. I’m particularly interested in understanding how these species interact in changing landscapes.

Habitat degradation and other factors have caused populations of mule deer, a common species in many parts of the West, to decline across much of their native range. My collaborators and I recently published a study examining how mule deer use forests that have burned, and how wildfires affect deer interactions with cougars and wolves.

We found that mule deer use these burns in summer but avoid them in winter. Deer also adjusted their movement to reduce predation risk in these burned landscapes, which varies depending on whether cougars or wolves are the threat.

Understanding how mule deer respond to burns and interact with predators in burned areas may be essential for conserving and restoring wildlife communities. Our findings could help land managers and policy makers balance the needs of wildlife with those of humans as they evaluate wildfire impacts and create policies to address future wildfires. 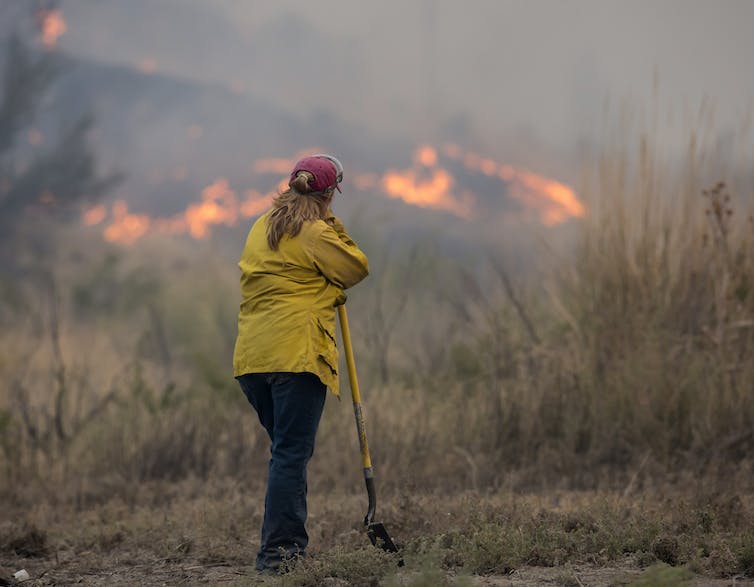 Many forests in western North America have trees that have evolved to withstand fire. Some even depend on burning to dispense seeds. Herbivores can thrive on the lush vegetation that grows after a blaze – so much so that burned areas have a “magnet effect” on deer, attracting them from surrounding areas.

But as fires trigger forest regeneration, they also restructure landscapes. And this process is influencing interactions between predators and prey.

Wildfires have had major impacts in recent decades in the Methow Valley of Okanogan County in northern Washington, where my collaborators on the Washington Predator-Prey Project and I focus our research. Wolves recolonized this area over the past 15 years, and researchers, land managers and the public want to know how the presence of wolves is affecting the ecosystem.

Fires have burned nearly 40% of this region since 1985, with more than half of those burns in the past decade. As in much of the West, low-severity fires historically were frequent here, burning every one to 25 years, with mixed-severity fires burning every 25 to 100 years. But now the area is seeing larger and more frequent fires.

Drone footage of the Methow Valley, at the center of the author’s study area in Okanogan County, north-central Washington.

In northern Washington and much of the American West, fires clear the forest understory and burn away the shrubs and small trees that grow there. In more severe fires, flames reach treetops and burn away the upper branches of the forest. More light reaches the forest floor post-fire, and fire-adapted plants regenerate.

After a fire, burned forests can be lush with shrubs and other vegetation that deer favor as summer forage. In our study, deer generally preferred burned areas for about 20 years post-fire, which is the time it takes for the forest to move beyond the initial regrowth stage.

Fires also affect deer behavior in winter. In unburned evergreen forests, trees’ upper branches intercept much of the falling snow before it builds up on the forest floor. Where fires have removed these upper branches, snow is often deeper than in unburned forests.

The snow prevents deer from feeding. It also makes deer more vulnerable to carnivores, since their hooves sink into the snow, while predators like wolves and cougars have wide paws that help them walk over the snow. For these reasons, the mule deer we tracked avoided burns in the winter.

Many species can thrive in recently burned western forests.

Cougars and wolves prey on mule deer in different ways. Cougars, like nearly all cats, hunt by stalking and ambushing their prey. Often they rely on shrubs and complex terrain to approach deer undetected.

In contrast, wolves hunt by chasing their prey over longer distances. This strategy works best in open terrain.

After fires, vegetation growth and the accumulation of fallen trees and branches can create stalking cover for cougars and also provide refuge for deer to hide from wolves. In Washington, we found that deer were generally less likely to use burned forests in areas of high cougar activity, although their response also depended on the severity of the fire and the time that had elapsed since the fire.

Deer had to balance the availability of improved summer forage in burns with increased predation risk from cougars. In areas heavily used by wolves, however, burns created a win-win for deer: more food and less risk of being detected by a predator.

To assess how wildfires altered forests in our study area, we used satellite data to map 35 years of impacts from fires that occurred between 1985 and 2019. This data set represents one of the widest ranges of fire histories yet examined by wildlife researchers.

To investigate how deer navigated burns and avoided predators, we captured 150 mule deer and fit them with GPS collars programmed to record a location every four hours. We also caught and GPS-collared five wolves and 24 cougars to map the areas those species used most heavily.

Putting all of this information together, we examined burn history, wolf activity and cougar activity at the locations that mule deer used and compared the results with locations the deer could have reached but did not use. This approach measured how strongly mule deer selected for or avoid burned areas with varying levels of cougar and wolf activity.

Wildlife is part of healthy forests

Our study and others show that deer and other wildlife use burned areas after wildfires, even when these zones have been intensely burned. But these fires bring both costs and benefits to wildlife.

Mule deer may benefit from the opportunity to feed on better summer forage. But avoiding burns in the winter, when the ground is covered with snow, could reduce the deer’s range at a time when the animals already gather at lower elevations to avoid the deepest snow.

Our research suggests that in fire-affected areas, scientists and land managers who want to predict how burns could affect wildlife need to account for interactions between species, as well as how fires affect food supplies for herbivores such as deer. As policymakers debate suppressing wildfires, treating forests to reduce fuels and logging after fires, I believe they should consider how these strategies will affect wildlife – a key part of biodiverse, resilient landscapes.