The ducks were captured in traps baited with barley out on the water.

The crew carried the grumbling ducks to a processing site set up on two pickup trucks parked with tailgates open. Pliers, syringes and swabs are laid out, ready for action. 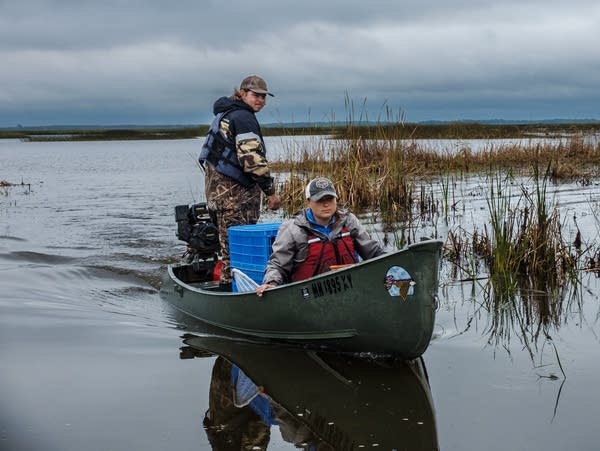 Minnesota Department of Natural Resources waterfowl technicians Sophie Arhart and Ryan Dunnell come to shore with dozens of captured ducks in crates. Each of the ducks will get a numbered leg identification band, some will be swabbed and have blood drawn to test for avian influenza. Dan Gunderson | MPR News

McCarty records the leg band number and the age and sex of the duck.

This is part of the Minnesota Department of Natural Resources’ annual waterfowl banding initiative. Each year some 3,000 ducks are captured and outfitted with a numbered aluminum leg band. When hunters turn in the bands, it helps biologists track migration patterns and bird mortality.

But a subset of these ducks will also be tested for avian influenza.

“Swabs test for active virus on the bird and then blood samples will test for antibodies within the blood,” explained McCarty.

This is a multi-agency effort. The team catching the ducks and leading the banding work is DNR.

The swabs will be sent to a lab in Missouri. Any positive results will be confirmed by the National Veterinary Services Laboratories in Ames, Iowa.

This is part of a national surveillance effort.

"By taking this national approach, we can get information not just from here, but as they move down the flyway in the different states," said White.

“It helps give us an understanding of what’s going on in the wild bird,” he said. “And we can pass that information along to poultry producers and maybe it will help them make different management decisions as far as protecting their flocks.”

Minnesota sees a lot of ducks. According to the DNR, 60 percent of migratory birds in North American pass through the state as they follow the Mississippi flyway in spring and fall.

Researchers are eager to learn more about the highly pathogenic avian flu virus because the current variant is not acting like those in previous outbreaks. 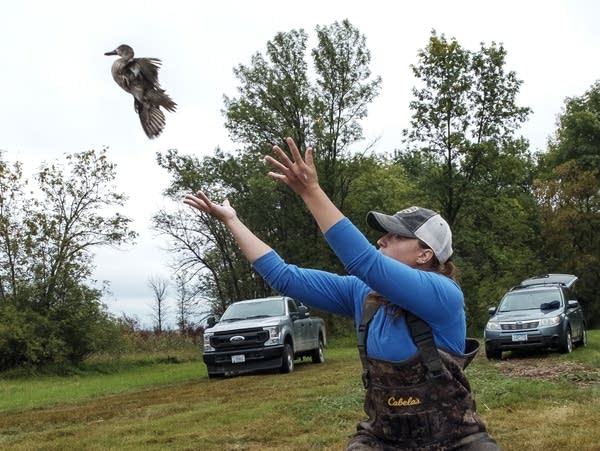 This virus has continued to circulate through the summer, killing many more wild birds compared to previous outbreaks.

There’s a lot of virus out on the landscape, which makes this surveillance important, said Julianna Lenoch, USDA National Wildlife Disease Program coordinator.

"The biggest things for us to understand (are), is the virus still circulating, which bird species are carrying it and which flyways they may be returning to as we look to the fall migration and the birds returning across North America," she said.

Lenoch said poultry producers did a great job earlier this year of reducing the impact of the virus by implementing strong biosecurity plans, and those plans should be active now.

“I wouldn't wait for it to be detected close to you, our evidence right now is that this virus is pretty widespread and pretty present, so all of our poultry enthusiasts are encouraged to maintain that level of biosecurity,” she said. 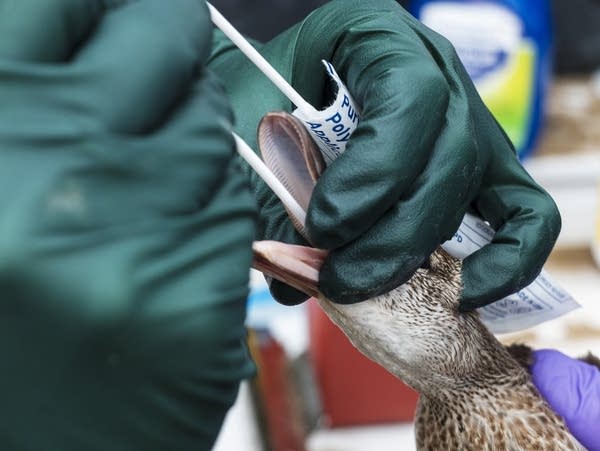 A duck has a swab sample taken from its throat to be tested for avian influenza virus at Thief Lake Wildlife Management Area near Middle River, Minn. Dan Gunderson | MPR News

The Minnesota Board of Animal Health has reported nearly a dozen case of avian influenza in commercial and backyard poultry flocks this month.

Lenoch says there are at least two variants of the highly pathogenic H5N1 virus circulating in North America. One entered the country on the east coast, the other on the west coast.

Viruses are constantly mutating and co-mingling and experts want to know what might have changed over the summer.

"So what's important for us to understand now is are we seeing any mixing of those viruses,” said Lenoch. “Could we potentially see any emergence of a new virus in North America as those strains and those bird migratory pathways converge? That helps us potentially understand what we might be looking at for fall risk." 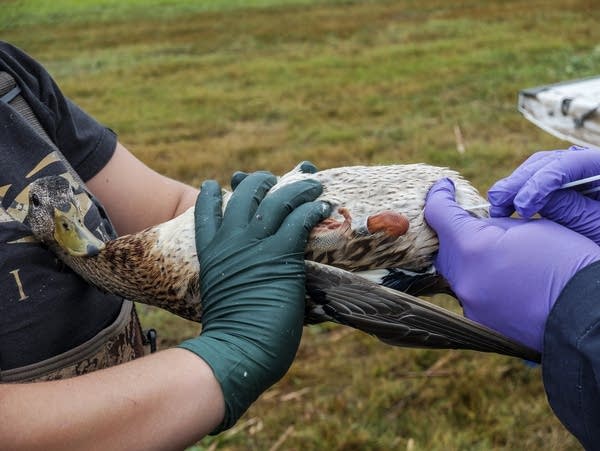 Throat and rectal swab samples are collected from a duck to test for the presence of avian influenza. Waterfowl can often carry a variety of avian influenza viruses without becoming sick. Dan Gunderson | MPR News

“The landscape is riddled with risk, if you're an avian out there,” said Bryan Richards, the Emerging Disease Coordinator at the U.S. Geological Survey National Wildlife Health Center. “The virus is out there, it remains a threat, it didn't go away. And I think the evidence suggests we'll see more of this going on through the fall.”

The virus has continued to kill wild birds over the summer, hitting colonial nesting birds such as terns and pelicans hard, said Richards. The virus has also been found in a range of mammals from juvenile red fox in Minnesota to a black bear in Canada, and earlier this month the first ever case in a dolphin in Florida.

“And now we're at the beginning of fall bird migration, so birds are on the move. And so those birds coming back down from northern latitudes, we’ll have to see what they bring with them,” said Richards.

While USDA is conducting surveillance in 49 states for the virus responsible for outbreak that's killed more than 40 million turkeys and chickens nationwide, and nearly 3.5 million domestic poultry in Minnesota this year, other researchers are taking a deeper look.

At the Thief Lake Wildlife Management Area, Alinde Fojtik prepares to draw a blood sample from the jugular vein of a duck immobilized on the tailgate of a pickup. 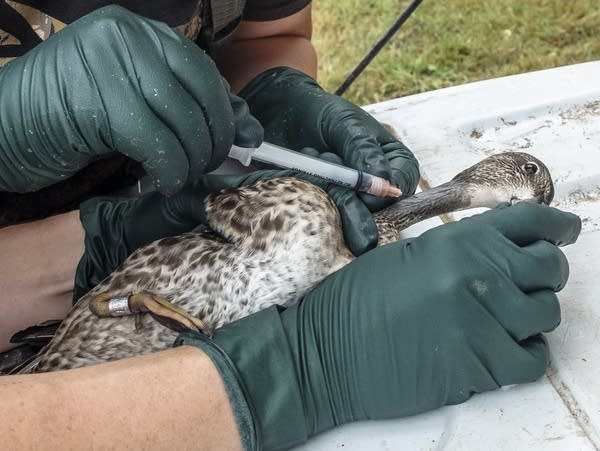 Blood is drawn from a few ducks to test for viral antibodies. This data is part of a long-term project by the Southeastern Cooperative Wildlife Disease Study at the University of Georgia to monitor avian influenza. Dan Gunderson | MPR News

Fojtik is a Research Professional with the Southeastern Cooperative Wildlife Disease Study at the University of Georgia.

She travels the Mississippi flyway collecting waterfowl samples. The project was been collecting samples since 1998, and annually in Minnesota since 2005, amassing a huge collection of data on the multitude of flu viruses that co-evolved with waterfowl over millennia.

"We track low pathogenic avian influenza viruses so we can see what naturally occurs in the populations,” explained Fojtik. “Trying to establish the normal trend of flu and then we see if something changes, if something is different."

So the swabs and blood samples collected here in northern Minnesota will not only help track the risk from the current deadly avian influenza virus, but also help provide context, allowing scientists see the big picture of how these ever-present viruses in waterfowl are changing.