Photo: Law enforcement respond to Lourdes High School after a caller reported a person with a rifle as was the school Wednesday in Rochester. Joe Ahlquist | Post Bulletin

Police responded to calls of an active shooter or someone with a gun in multiple schools in Minnesota on Wednesday morning, but no threat was found and no one was hurt. It is part of what officials say may be part of a series of hoax calls across the country.

The Minnesota Bureau of Criminal Apprehension said the calls were believed to be “swatting,” which “involves making a prank call to law enforcement services in an attempt to bring a large law enforcement response to a particular address.”

The agency also said its Minnesota Fusion Center, which collects information on crime across the state, found “more than a dozen schools have received fake calls.”

Police said in an 11:30 a.m. news conference in Rochester that they are working to track down who made a hoax call there. They already know it came from a real person — not a recording — using an internet phone number with an area code not from Minnesota. Police said the caller could be charged with filing a police report or something more serious if they made multiple calls.

“This is just a despicable act to put at risk the lives of everyone,” said Olmsted County Sheriff Kevin Torgerson at the conference. “It just really makes me sad … that somebody would be willing to do this and cause that kind of grief.”

Schools across the country have experienced swatting in recent days.

Rochester police initially said a call came in just after 10 a.m. to report someone with a gun at Rochester Lourdes High School.

A school spokesperson said nearly all of the students were in an auditorium at the time of the report, so it was easier to secure the area.

The Olmsted County Sheriff's Office said on Twitter around 11:30 a.m. that “the report of an active shooter at Lourdes High School has been determined to be a false report. We are aware of other similar situations of false reports across the county.”

Rochester Public Schools said in a statement that a student at Mayo High School in Rochester saw someone in the parking lot there with a gun and reported it, sending Mayo High School into lockdown, but it turned out the person they saw was an officer responding to Lourdes High School. No other Rochester schools were in lockdown as of midday Wednesday. 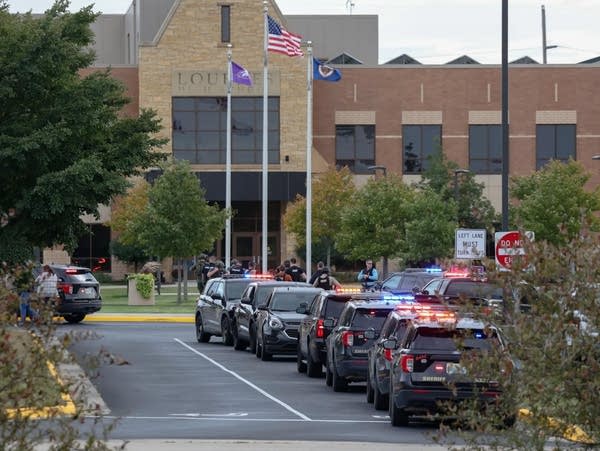 The City of Mankato posted on Facebook that the Mankato Department of Public Safety responded to a similar report around 10:30 a.m. “of an active shooter at West High School.”

“It's believed the call was a hoax, also known as 'swatting,' which is when someone makes a prank call to law enforcement claiming an emergency and provides a real address for someone to respond,” Mankato posted on Facebook.

“Several other schools in the region received similar calls providing identical details. It's believed this is part of a nationwide swatting incidence occurring in multiple states, which has been confirmed by the Federal Bureau of Investigation.”

The Cloquet Police Department reported that “at 10:37 a.m., the Carlton County Sheriff's Dispatch Center received a phone call from an unknown, unidentified person stating there was an armed suspect with an AK-47 shooting students at the Cloquet High School in room 108 of the English department.”

Cloquet High School and Cloquet Middle School were placed on lockdown. Police and other agencies responded and found there were no issues, and that the room number did not exist.

Police said that call was also “believed to be a hoax or swatting attempt,” which they explained “may be motivated by revenge, used as a form of fear or harassment, or a prank, but it is a serious crime with severe consequences.”

“When an incident of this nature occurs in our city, it consumes much, if not all, of our resources,” police said in a statement.

According to Cloquet police, “The FBI informed us that the call originated in a similar bomb threat incident in Africa.”

St. Paul Public Schools confirmed a hoax threat at one school. The emailed message from superintendent Joe Gothard Wednesday afternoon did not identify the school.

Gothard said no weapon was found and he thanked St. Paul police “for acting swiftly to ensure the safety of our students.”

After the lockdown was lifted, APS sent an update to families saying “Thank you for your patience while we worked with first responders to respond to the situation.”

How to report information on the calls

Mankato officials asked anyone with information on the calls to contact Mankato Public Safety at 911 or 507-387-8725.

The Bureau of Criminal Apprehension said people can contact them as well as notify law enforcement and school resource officers about suspected threats using their See It Say It Send It app.