Sen. David Tomassoni speaks on a jobs and energy bill during a 2015 special session. The longtime Iron Range lawmaker died Thursday night, a little more than a year after being diagnosed with ALS.  Photo: Jennifer Simonson | MPR News 2015

Longtime state Sen. David Tomassoni of Chisholm, Minn., died Thursday night, a little more than a year after announcing he had ALS, also known as Lou Gehrig's disease. He was 69.

A longtime Iron Range DFLer who served as an independent at the end of his political career, Tomassoni was first elected to the Minnesota House in 1992 before his election to the Senate in 2000.

For much of the past few decades, any deal that got done at the Minnesota Capitol had the fingerprints of Iron Range lawmakers all over it. The delegation held together, worked all the angles and usually extracted something big for northeastern Minnesota.

The gregarious Tomassoni was a key member of that team, not because he was a wily tactician but because he had way more allies than adversaries.

"He was without question the most beloved member of the Senate. It's a big loss to the Senate to lose somebody who always overcame the partisanship," state Sen. Tom Bakk, I-Cook, a colleague and close friend, told MPR News.

Tomassoni wasn’t able to spend much time at the Capitol this year. His decline from ALS was swift, costing him his mobility and his ability to speak. The disease affects the nerve cells responsible for controlling voluntary muscle movement. People gradually lose their ability to talk, walk and breathe. There is no cure. 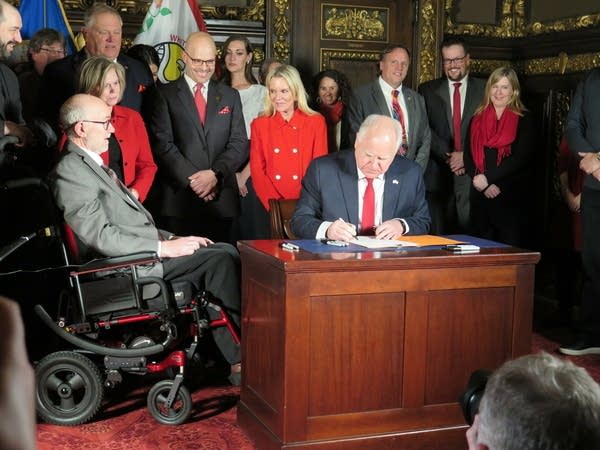 “This is about making the future better,” Tomassoni said. “We can all be proud of that. This is truly a good day.”

‘Don’t take yourself too seriously’

Tomassoni secured millions upon millions of dollars over the years for his district for roads, other projects and schools. During his time in the House and Senate, he chaired committees on natural resources, economic development and education.

Accolades poured in Friday from across the political spectrum.

“David was a champion for his constituents, the Iron Range, and all of Minnesota,” Gov. Tim Walz said,, noting the recent ALS legislation as a key achievement. “His legacy will continue to help people in Minnesota for generations.”

“I remember him as a man with a great sense of humor, rare in the political atmosphere of the state Senate, and a political opponent who never let policy arguments detract from his natural kindness and generosity of spirit,” Hann said in a written statement.

“They could get anything done they wanted to get done. And they never did it by throwing bombs. They worked across the aisle. They formed relationships. You would toast a glass of wine and he'd always have his his cheese boards out in his office,” she recalled. “That's how Senator Tomassoni got things done and never, never had one enemy along the way, only friends.”

Tomassoni had spent a lifetime as a team player. He was a star hockey defenseman who played in the 1984 Olympics for the Italian team, an homage to his cultural heritage.

He later became active with the U.S. Hockey Hall of Fame, based in Eveleth, Minn. There’s an annual golf event for the hall this weekend.

Housley, whose family has deep hockey ties as well, said she expects that gathering to be heavy on the memories of and toasts to the playful Tomassoni. “I was just telling my husband, ‘Boy, heaven just got sure got a lot more fun today.’”

Tomassoni received multiple standing ovations and brought his colleagues to tears as he said goodbye to the Legislature in May.

“I treasure the time I have been able to work in the Senate. And I use the word work because this is serious business,” he said on the Senate floor with the aid of assistive technology.

“Doing the people’s work comes with a lot of personal sacrifice and responsibility and is oftentimes hard on family,” he said. “But it also has its allure.”

He reflected on how the job competed for time with his wife, two sons and a daughter, and he shared parting words of advice.

“Don’t take yourself too seriously,” he said. “The ax can fall quickly if you don’t treat the position with respect and humility.”

Tomassoni previously announced he wouldn’t seek a new term. By law, there won’t be a special election to fill his seat given the proximity to the general election. Funeral arrangements are pending.