For her birthday, Linda Schwin received a ticket to the Guthrie Theater’s production of Emma. She did not know that the performance was a special showing, designed to accommodate those with autism and other sensory-related disabilities. While the experience was new for her, it is one she supports.

“Oh absolutely. I think it's wonderful that they're doing this,” Schwin said.

A theater performance can be overwhelming, and not in a good way for people sensitive to lights, sounds and certain movement. Since 2018, the Guthrie has offered what the theater calls relaxed performances.

These performances, usually only one performance toward the end of a show's run, change certain elements of the show, such as adjusting special effects used on stage. But other theaters are now seeing an opportunity to expand audiences and keep with a mission to not exclude anyone.

Jillian Nelson has attended and worked on performances like these for years. Nelson, who has autism, works at the Autism Society of Minnesota and also consults on sensory friendly programming at the Guthrie.

“There’s not enough access for people with … disabilities like anxiety or autism,” Nelson said. “Accessibility needs to be all parts of our community, including our culture.”

Robyn DeCourcy, the Guthrie’s accessibility coordinator, said a lot goes into making a relaxed performance happen, beyond what happens on stage.

“The idea of taking some sensory considerations in mind, so things like, adjusting volume or turning down lights ... we do so much more than that,” DeCourcy said.

The other adjustments DeCourcy makes to the theater’s environment include making sure there are quiet spaces for audience members to retreat to if they become overwhelmed and creating guides that explain what patrons will see in each scene of the play. 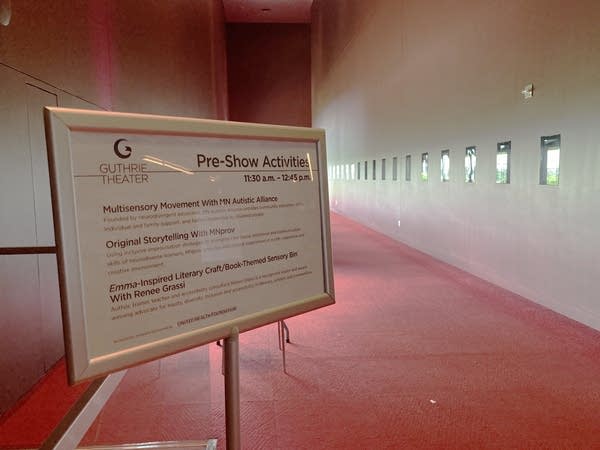 Occupational therapist Gina Brady, who works at the nonprofit Fraser, said that opportunities like this allow those with autism to enjoy the benefits of theater and participating in the arts more generally.

“Decrease in anxiety, decrease in feelings of isolation, increase in academic achievement,” Brady said. “It’s really important to be able to go out into the community and have these experiences.”

Brady has seen an increase over the last five years in theaters reaching out to organizations like Fraser to help develop autism-friendly programs.

“People will see, you know, how well some of these programs are doing and succeeding and so then they want to model something similar, or even take that idea and expand upon it,” she said.

In the Twin Cities alone, the Children’s Theatre Company, the Minnesota Orchestra, Twin Cities Ballet and Hennepin Theatre Trust have all offered some form of sensory friendly programming.

Smaller Minnesota arts organizations are adopting the practices as well.

Mary Barinka, the autism resource specialist at Hormel Historic Home, has been working with Summerset on the show. She also brought in Brady to consult on the project.

Barinka began collaborating with the theater after they reached out to her in 2019.

“When they looked at Mary Poppins on their docket for a performance for this summer, they said, ‘Let’s work together to make this a sensory friendly event,’” Barinka said.

Director John Deyo said that from a production standpoint, the show is of the same caliber as other performances.

“We are giving that audience the same show that every other audience gets,” he said. “We are making what modifications we have to make the performance accessible … but from a director's standpoint, I’m not changing the performance tremendously.”

Brady hopes theaters do more to build inclusive spaces for all performances to give people more options to see them and to know in turn that the theater organization supports them.

Jillian Nelson said the best thing theaters could do for sensory-friendly performances, is to have more of them for adults.

“A lot of theaters are only providing sensory-friendly experiences for shows that they consider marketable to families and children.” she said. “Those children that attend theater grow up ... continuing to make theater accessible for people of all ages would be one of the most beneficial changes theaters across the country and across the state could make.”