Perhaps this plateau has become our new normal.

The relatively steady statewide trends overall, however, can mask important variations in communities throughout the state. As you will see, the data is pointing to increased COVID, as detected in officially reported case rates or found in wastewater, in much of the state’s rural south and west. Proverbial prairie fires of COVID that we hope won’t flare higher or spread further.

We conclude this week with a quick look at how another infectious disease is impacting the state -- the newly-declared public health emergency of monkeypox.

Cases rise in some areas of the state, deaths also increase

The COVID case plateau is starting to look more like an upward rise in some parts of Minnesota, particularly the western flank of the state. Reported weekly cases in the Northwest region are about double what they were a month ago. The Northeast and Twin Cities seem to be faring the best, with cases near or slightly down from where they were at the beginning of July. More on the regional trends in the wastewater section below. 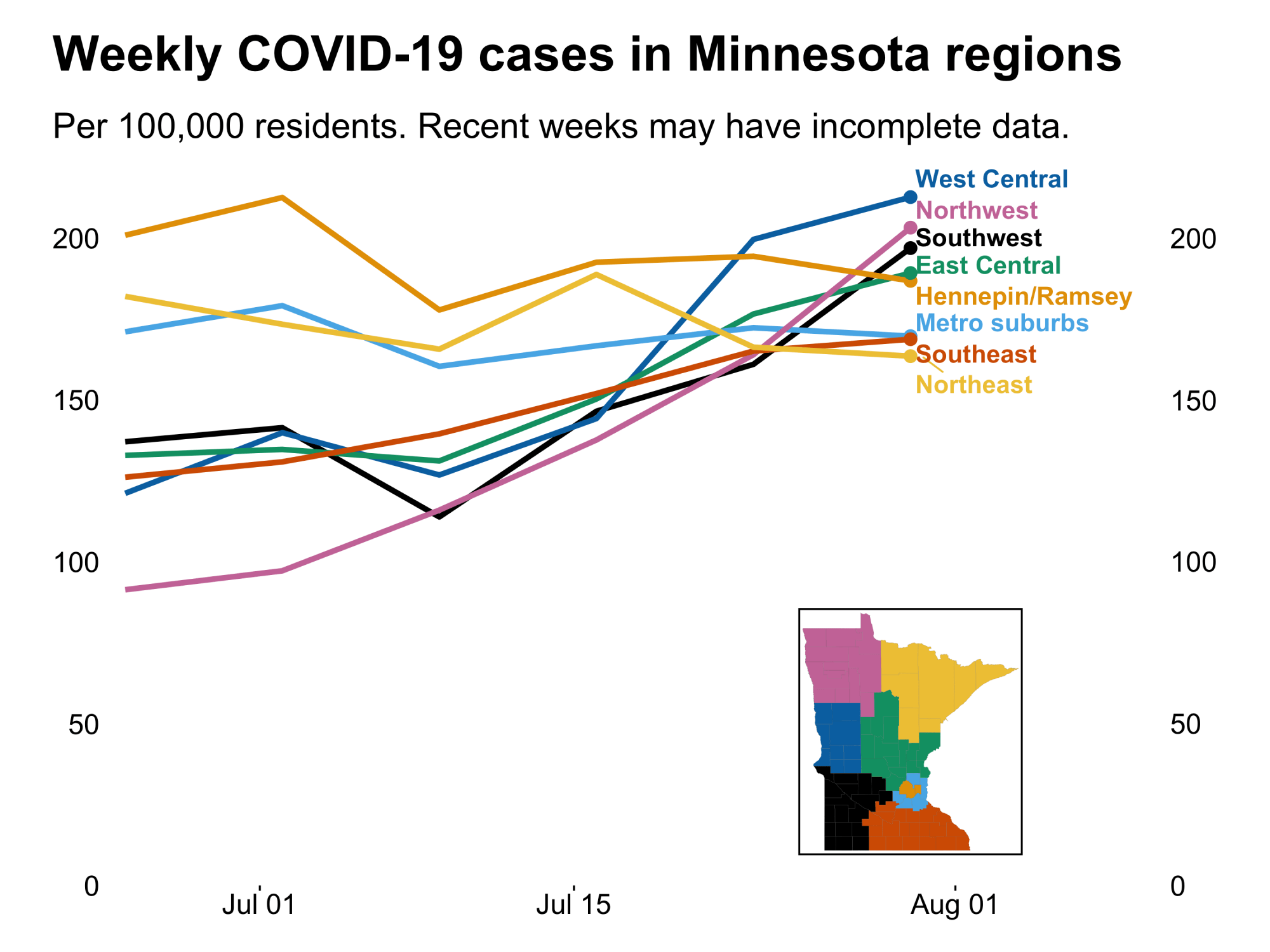 Western Minnesota has seen an increase in cases over the last month. Graphic: David Montgomery

Hospitalizations remain close to where they were last week. Overall, there are about 65-70 people admitted to the hospital every day with COVID in Minnesota. A little over 10% of those admissions are to the ICU. 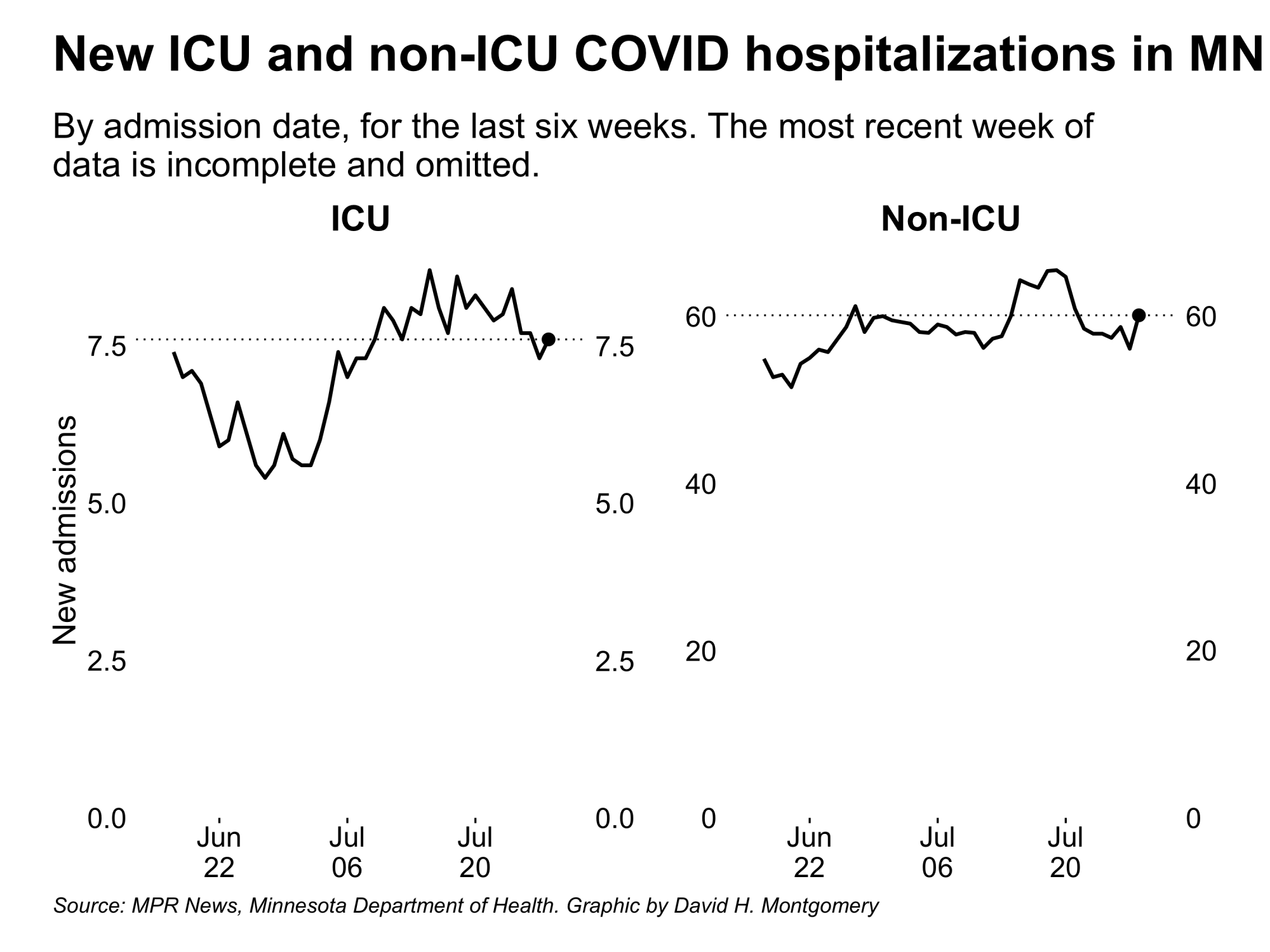 The rate of hospitalization is approximately unchanged since last week.  Graphic: David Montgomery

After a slow but mostly steady decline in deaths since early June, deaths have gone up some starting in about mid-July. Death data takes longer to confirm, so it’s a dashed line on the graph below. But unfortunately those numbers are unlikely to go down, and if anything may rise further. 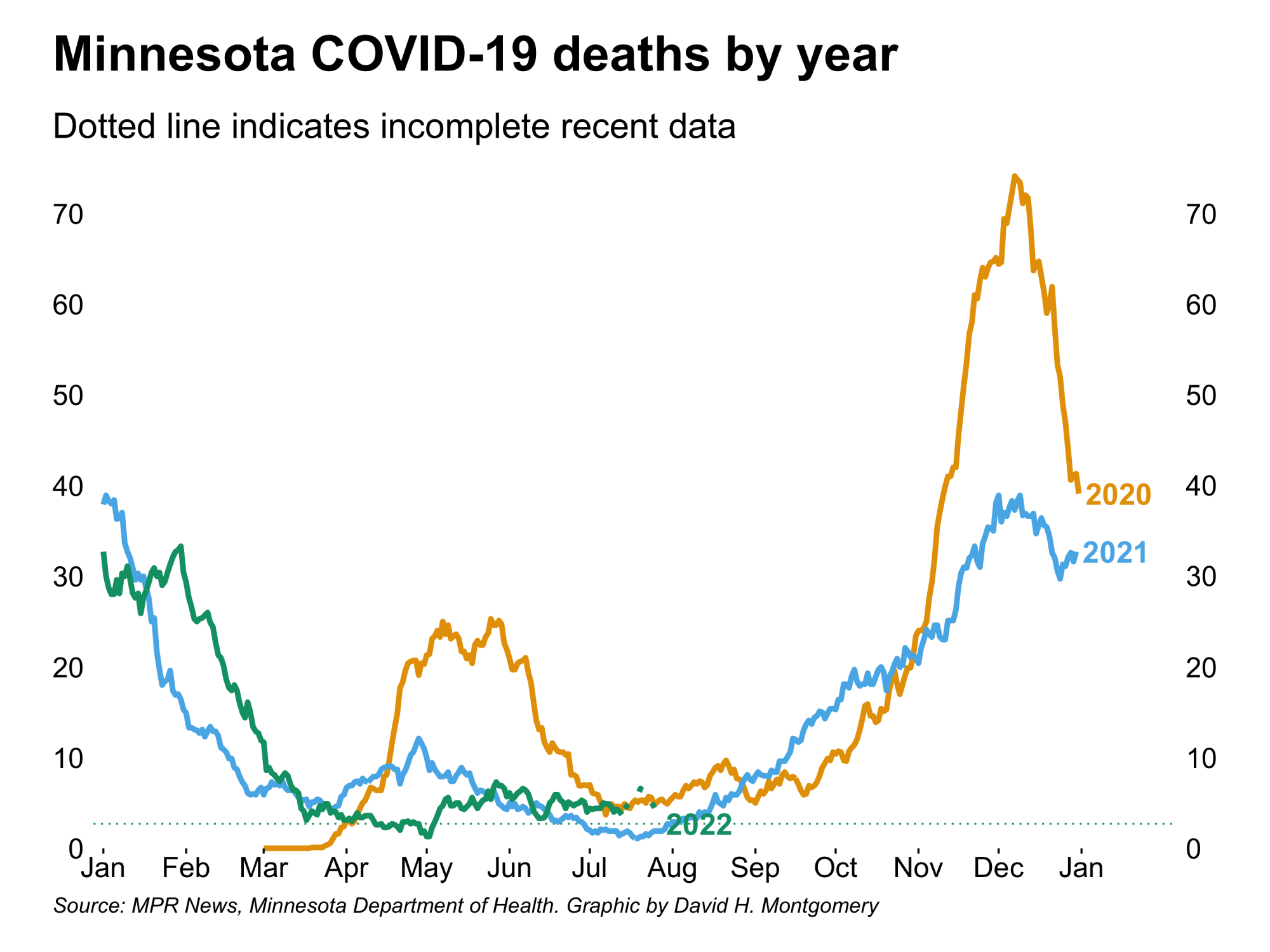 After a slow decline since early June, deaths appear to be on the rise.  Graphic: David Montgomery

Seven percent decrease over the prior week. That is today’s headline out of the weekly report from the Metropolitan Council and the University of Minnesota’s Genomic Center regarding COVID-19 levels detected in wastewater sampling from the Metro wastewater plant, for the week ending August 1st. 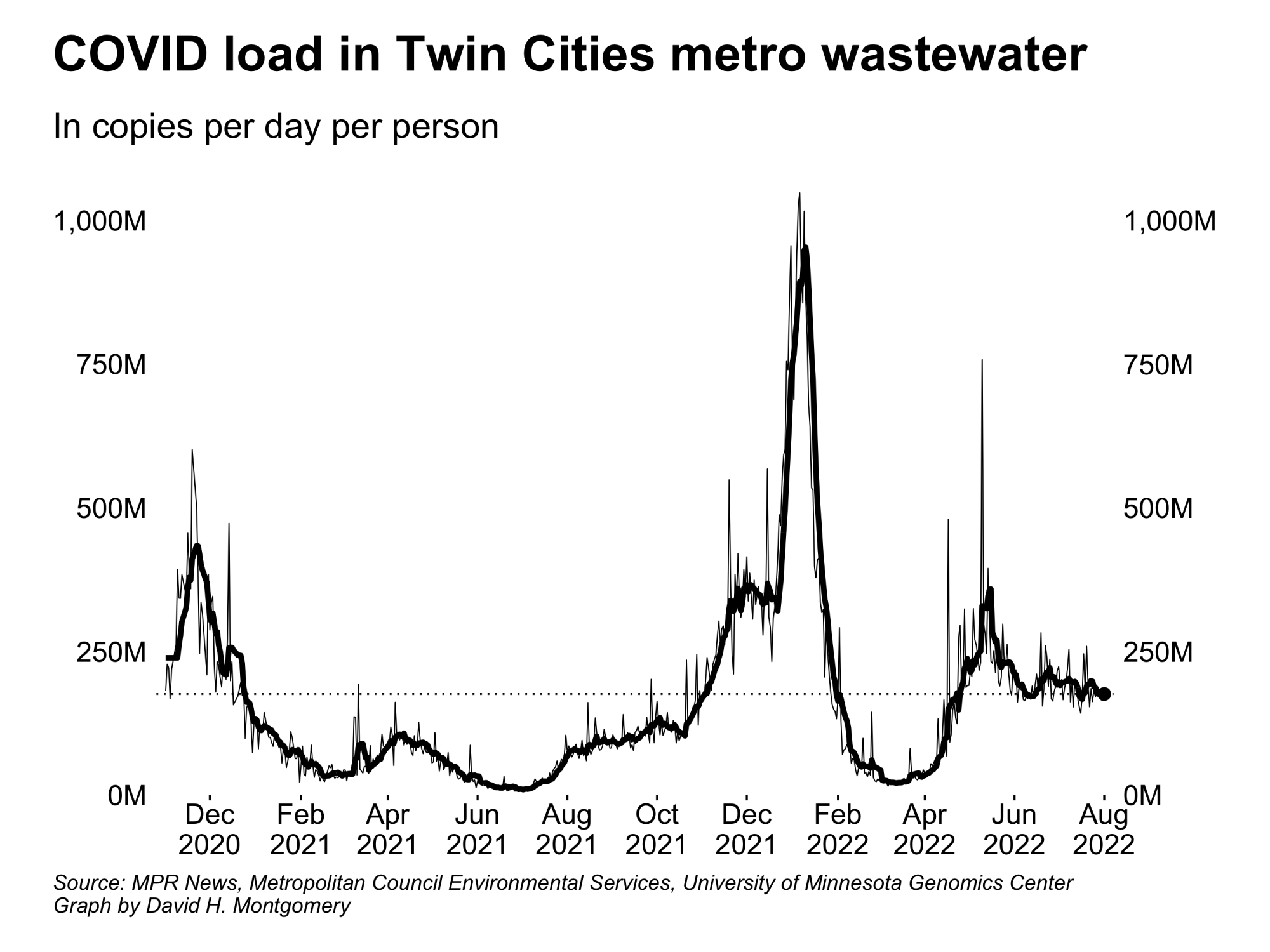 In contrast, the University of Minnesota’s Wastewater SARS-CoV2 Surveillance Study shows a weekly increase of eight percent in the largest region included in their project – the 13 treatment plants serving 2.8 million people in the Twin Cities Metro. But that is for the week ending July 20, coinciding closely with what the Metropolitan Council reported last week.

Again this week the data from the Surveillance Study points to bigger concerns in the South West and South Central regions, both of which continue to show substantial increases in COVID-19 over the week and month ending July 20. The North East region is also seeing a notable weekly increase, which stands in contrast to a more plateau-like trend seen in the case counts of recent weeks.

The counties that the CDC urges to mask up this week are….

According to the CDC’s weekly “Community Level” guidance, released yesterday afternoon, those in Beltrami, Big Stone, Clearwater, Fillmore, Martin, Olmsted, Ottertail, Pipestone and Rock counties should mask up when in crowded or indoor settings.

Residents of 41 other counties are now rated as having a medium risk. The 37 low risk counties include the entire Twin Cities seven-county area—and account for three-quarters for the state’s population.

Once again, the CDC’s parallel Community Transmission maps raise even more concern, with 80 of Minnesota’s 87 counties—including 99 percent of the state’s population— having case rates exceeding their “high” transmission threshold of 100 or cases per 100,000 over a one-week period.

Yesterday the White House declared a public health emergencyfor monkeypox. Despite the alarming language, it doesn’t mean there’s cause for panic. As the opening of yesterday’s MPR storyon the virus states, “Minnesota health care providers on the front lines of the monkeypox outbreak say the risk remains low.”

Minnesota Department of Health has reported 46 cases as of this morning. CDC’s data still registers yesterday’s total of 44 cases, which puts Minnesota as ranking 21st out of the 50 states and Washington DC as far as number of total cases. Looking at rates of the disease per million doesn’t change much for Minnesota – by that measure Minnesota sits right in the middle, ranking 25th.

Monkeypox appears to be most transmissible through skin-to-skin contact. So unlike COVID, you are unlikely to get monkeypox from simply attending a community event or being in a public space. And while it is a painful and disruptive illness, at this point there have been no deaths in the U.S. resulting from the virus, although there have been a small number of deaths in other countries.

To see the original report and read related stories, follow this link to the MPR News website. https://www.mprnews.org/story/2022/08/05/minnesotas-covid-plateau-a-new-normal