The laker Manitoulin sits at the ore docks in Two Harbors on Thursday near the Festival of Sail and the large inflated rubber duck.  Photo:  Steve Kuchera | Duluth News Tribune

Towering six stories above the ground, bright yellow with a big round belly, the world’s largest rubber duck certainly looks the part at the Festival of Sail in Two Harbors, Minn., along the North Shore of Lake Superior.

“She’s a big girl,” concedes Craig Samborski, the Duluth-based entrepreneur who puts on tall ships festivals around the country, and had the first giant duck built back in 2014.

"The only thing I knew was it was going to be really smart, or really dumb. That sort of sums up being an entrepreneur in a sentence,” he said, looking back on his decision to spend more than $50,000 to have it made.

He’s looked pretty smart ever since. The duck has since traveled the country, bringing smiles wherever it goes. 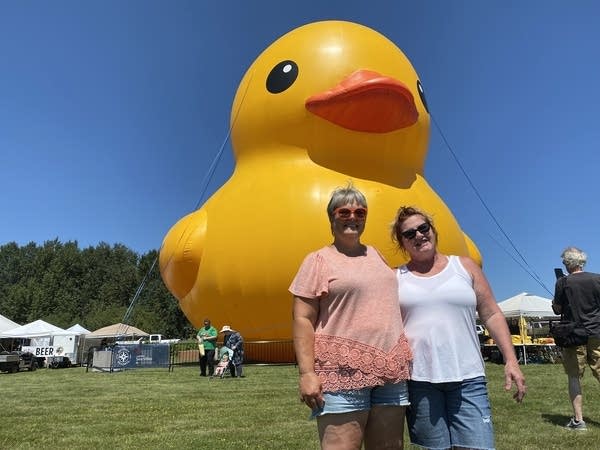 "When you're little you had the rubber duck in your bathtub, you got it for your kids...and he's fricking adorable, right?” exclaimed Teresa Sessions of Mondovi, Wisc., after posing for a picture in front of the duck with her friend Betty Staab.

"This duck brings so much joy to people,” said Samborski, soaking in the scene. “And I feel super lucky that I'm the guy that gets to be on the receiving end of their joy."

The world's largest rubber duck was born on something of a dare. In 2014, Samborski was in Los Angeles working on a tall ships festival. Over drinks one evening a city employee also on the project threw down a challenge. 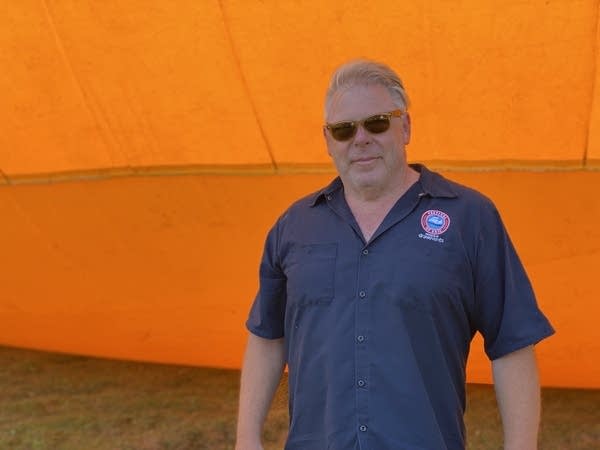 Craig Samborski, a Duluth-based large events planner who organizes tall ships festivals around the country, came up with the idea to build the world's largest rubber duck in 2014.
Photo: Dan Kraker | MPR News

"He said to me, he's like, you're a nice event planner from Minnesota, Craig. But you're in L.A. and you need to go big, or go home."

"And, you know, I had enough beer in me that I [thought] that's a great idea," Samborski recalled.

But next morning he woke up, thinking, how the heck do I make something like this? So he called up David Scherba, who runs a company called Inflatable Images outside Cleveland.

Scherba and his brother were hot air balloonists in the 1970s when they came up with the idea to blow cold air into giant inflatables to use as advertising.

You could say the business, blew up. Since then they’ve created custom-built inflatables for just about every Fortune 100 company, making everything from giant beer cans to an 80-foot tall Pinnochio.

So it didn’t faze them when Samborski called, asking, “can you make me a giant rubber duck?”

"It was a crazy call, but not an unusual call,” said Scherba. “Because, you know, being in the business that I'm in, I get crazy calls for crazy things all the time." 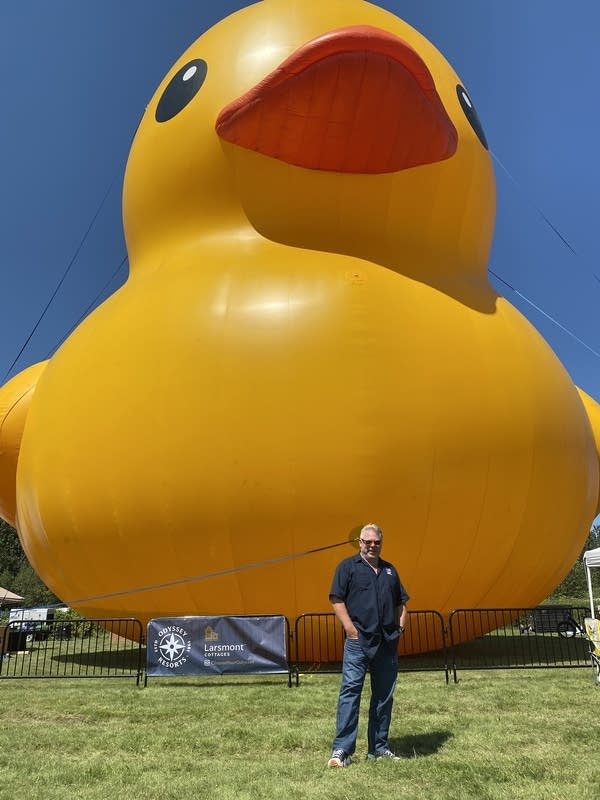 Craig Samborski, who had the world's largest rubber duck built in 2014, stands in front of his creation at the tall ships festival in Two Harbors, Minn., on Thursday.
Photo: Dan Kraker | MPR News

The duck was such a hit at that first event in L.A., Samborski trucked her across the country to the next tall ships festival in Philadelphia.

But that one didn't go as well.

"The duck sunk to the bottom of the Delaware River on live television,” remembers Bob Hom, who Samborski hired to help wrangle the duck around the country.

Hom is the retired operations director at the Duluth Entertainment and Convention Center. He actually gave Samborski his first job when he was 14.

Since that disaster on the Delaware, Hom said the duck's popularity has really taken off. He said it’s hard to explain the effect it has on people.

"When you see it, what it does to people. It's just amazing,” Hom said. “When we're in restaurants, whatever city we're in, they treat us like we're rock stars when they find out we're the duck wranglers. We're like a big deal. It’s just bizarre."

Samborski said it's almost like a religion. People have wept with joy upon seeing it for the first time. They’ve flown to the U.S. from Japan and other countries to see it in person. A young couple each had the duck tattooed on their ankles and tracked him down to take a selfie. He gets at least a dozen emails a day from fans.

But it hasn't all gone so — swimmingly — for the giant duck. There are duck haters out there, Samborsksi said, offended by its kitschiness. Several years ago a Dutch artist accused him of stealing his idea, a charge Samborski denies.

The duck’s design is based on the original 1930s toy that's now in the public domain, he said.

And this spring he had to pay for a replacement rubber duck, after the original was damaged at the grand opening of Tesla's giant new electric car plant in Texas. Yes, apparently even Elon Musk is a fan. “Elon said the duck has to be here,” he was told. 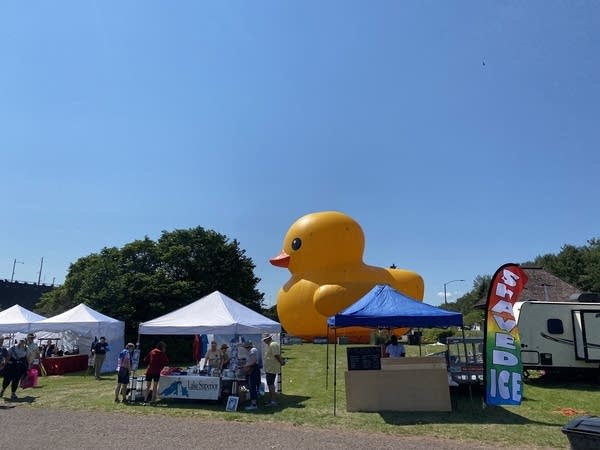 Samborski estimates he’s spent around $300,000 on the two ducks, the 30,000 pound steel pontoon he had specially made to hold the old duck in place in the water, and other expenses, including the cost to trademark the slogan “the world’s largest rubber duck.”

He said the duck itself hasn’t quite broken even yet. But merchandise sales helped pay his oldest daughter’s college tuition (one of the more popular t-shirts reads “I like big ducks and I cannot lie,” and features a row of duck behinds).

When Samborski was younger he produced huge events, including stadium shows for the band Metallica. Back then, he said, he was all about the “glitz and glamour.”

Now, he said witnessing the joy that the giant duck brings to people has completely changed his mindset toward his business.

The redesigned duck is much easier and cheaper to set up and transport, so Samborksi hopes to bring it to more places, including nonprofit fundraisers, and eventually, overseas.

The world’s largest rubber duck began as a great marketing gag, he said. Now, he’s absorbed some of that same joy the duck has brought to others.

To see the original story and read related reporting, follow this link to the MPR News website. https://www.mprnews.org/story/2022/08/05/worlds-biggest-rubber-duck-a-duluth-mans-quacky-idea-has-ou...