Max Ganshyn, 25, of Blaine, picks cherries with his family at Maple Leaf Orchard in Spring Valley, Wis. on July 22. Ganshyn's family, who are Ukrainian, have been in MN for seven years. Many Ukrainians use the cherries to make a traditional liqueur and raviolis. Photo: Caroline Yang for MPR News

It happened kind of by accident. Elizabeth Eubank’s grandfather planted a sweet cherry tree on the family farm in River Falls, Wis. back in 1952.

“And the first year it went really well,” Eubank said. “The second year there was nothing.”

The third year, a sapling shot up from the ground and, curiously, its cherries were sour.

“We still are trying to figure that part out,” she said. “But what our prediction is, is that the cherry was probably grafted. And then whatever the root stock was underneath it, it might not have been discovered or tried out to be an actual cherry tree. I think it was used just as a seedling.”

But it thrived and sent up several new shoots that Eubank’s parents would gift to Mark and Sue Christopher.

Some three decades later, the Christopher’s farm — Maple Leaf Orchard in Spring Valley, Wis. — has become a destination for tart cherry lovers in the region, particularly immigrant families who use the hard-to-find fruit in their traditional dishes. On a single day each summer, dozens take a trip to the orchard to fill multiple, construction-sized buckets with the glossy, red fruit. Kids abandon half-filled pails to run in the tall grass. And languages from all over the world echo through tidy rows of trees, occasionally breaking into English to share recipes.

“So we do a drink. It's called vișinată, because in Romanian the name of the sour cherry is called vișină,” said Nick Grigore, who now lives in Lino Lakes, Minn. “We put it in a big glass jar and put [in] some sugar, and we let it to sit for awhile in the sun. And the juice will come out and we put some alcohol in there. It's for the winter — Thanksgiving, Christmas, things like that.”

From the next tree over, Sheohreh Tami of Maple Grove playfully shouts to Grigore that he should add vodka. That’s what her family, which is Iranian, would do. But today, sporting a bedazzled “USA” t-shirt, she’s picking cherries with something else in mind: dinner for her visiting daughter and grandkids.

“I let the cherry cook a little bit with sugar, but not too much sugar and no water,” Tami said. “I wait until it gets a little bit thick and then we add it to the rice and make meatballs to serve on top. It’s delicious.” 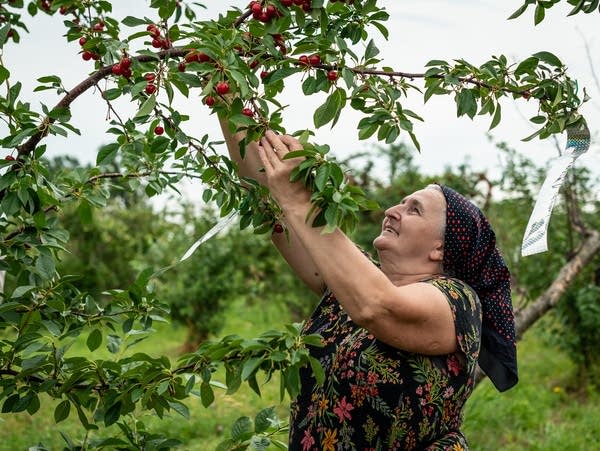 Several trees down the row, Larysa Lukyanchuk says this valley reminds her of home in Ukraine. And if you squint, you could almost imagine she is home. She wears a floral dress and headscarf.

But she and her husband, Figif Lukyanchuk, are here with her American-born grandchildren. They’ve been coming to the orchard for 10 years straight, to stock up on the cherries their grandkids love to eat frozen.

They’re not the only family that will have freezers full of cherries in the coming days. The orchard sells several thousand pounds by the end of this day each year, said co-owner Sue Christopher. But many customers also walk away with something less tangible.

As Alexander Geplitski picks cherries with his wife, Ukrainian news booms from the cell phone in his shirt pocket. A member of his family still lives in Ukraine.

“He is now safe because I am from the west and war is in the east. But everywhere there is war, so this is important,” Geplitski said.

I ask him about listening to something so difficult in such a peaceful place.

“Because for me, it is like medicine from God,” Geplitski said, referring to the cherries. 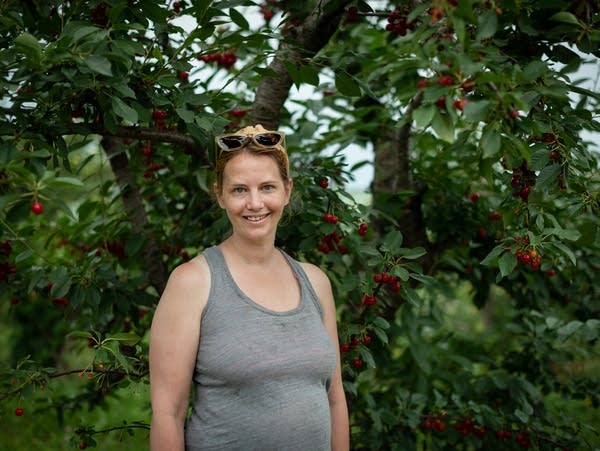 Elizabeth Eubank, 35, of White Bear Lake, poses for a portrait by a cherry tree at Maple Leaf Orchard in Spring Valley, Wis. on July 22. Photo: Caroline Yang for MPR News

This day is something like medicine for Elizabeth Eubank, too. Her dad, who helped bring these trees to market and, ultimately, bring all of these people together, died in a car crash nine years ago.

“And three days before he died, he was here picking cherries. And my last good memory of my dad was, once he got them home, we together put them in bags, got them separated,” she said. “And so for me, this is a really soothing time. It's a really great time for me to grieve and think of my dad.”

She named her son William after her dad. Tonight, they'll go home, sort their cherries, and bake their favorite cherry pie.

To see the original report and read related stories, follow this link to the MPR News website. https://www.mprnews.org/story/2022/07/28/like-medicine-from-god-wisconsin-cherry-orchard-offers-tast...