'Finndian?' 'Swanishinaabe?' Some Native people in northern Minn. reconnect with their Scandinavian roots Photo: Melissa Walls stands for a portrait July 27, in a field at Lester Park in Duluth. Walls is of Anishinaabe and Swedish descent and recently took part in a Swedish reality television show in which she visited Sweden and reconnected with her Swedish roots. In the process, she learned about surprising parallels in Anishinaabe and Swedish culture. Derek Montgomery for MPR News

Melissa Walls grew up in International Falls, Minn., the daughter of an Ojibwe — or Anishinaabe mom — and a Swedish-American dad. But for the most part, she was raised as part of her mom's large extended family, which descends from Ojibwe bands on both sides of the Canadian border.

Many of them worked at the Indian Center in town, where she remembers playing with other Native kids as a child. "So I knew very well that I was Anishinaabe, Ojibwe, growing up," Walls said.

In graduate school, she studied American Indian mental health and bonded with other Native American students. Now she's a professor and researcher for Johns Hopkins University, based in Duluth, where she's immersed herself in Ojibwe culture. 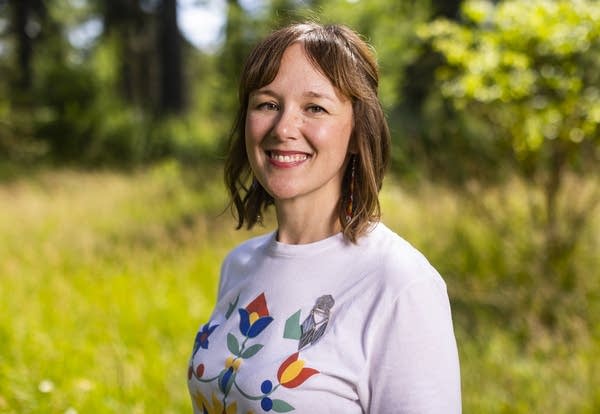 Melissa Walls is a professor and researcher for Johns Hopkins University, and she's immersed herself in Ojibwe culture. But Walls said she never knew much about her dad's side of the family. Derek Montgomery for MPR News

"I was a jingle dancer as a little girl and now I dance again,” she said. I “go to ceremony,” and “get to work with amazing elders across the region."

But through all this time, she never knew much about her dad's side of the family. Then, one day about five years ago, her dad's sister found an ad in the paper for a Swedish TV show called “Allt for Sverige.”

“And she sent me in the snail mail, a little clip of this little ad and she said, ‘they're casting for a reality show in Sweden, you should apply and learn something about this side of the family.’"

Walls knew she was joking. But she applied anyway. She recorded a brief video before running out the door to drive her son to a hockey game. To her shock, she was accepted.

"And all of a sudden, I'm being flown to Sweden to be on a reality show to find out about my Swedish family. It was bizarre.”

The show aired at the end of 2019. The experience, Walls said, changed her life.

"I got to meet a Swedish family member. I got to learn about where my family came from. I got to visit and touch the house that my ancestors lived in in the 1700s,” Walls said. “It was deeply, deeply emotional."

A growing number of Native Americans

Walls, 41, is one of about four million people who identified as Native American and white in the last census, nearly triple the number from 2010.

In all, nearly 10 million people identified as Native American, an 87 percent jump from 2010. Of those people, about six million are multi-racial.

Some of that dramatic growth is due to changes in how the Census Bureau collected and coded data, said Carolyn Liebler, a sociologist at the University of Minnesota who studies Native American and mixed race identity.

But she said it also reflects a willingness of more people to embrace their Native ancestry, after years of government policies that tried to erase it.

"Generations later, they're still Native people, but they're feeling less of that pain. It's more generational pain and not personal pain. And so people are willing to come back to it. It's more socially accepted now to be Native, to be a person of color," she said.

For Melissa Walls, she never had an issue accepting that she's Anishinaabe. But she struggled to understand how that core part of her identity could co-exist with her Swedish side. She hoped the reality TV show would help her reconcile something she wasn't even sure was reconcilable.

"Which is, embodying both the colonized and the colonizer, walking through the world with light skin, but feeling like I'm an Anishinaabe person. How could I be both? Can I be both? What does that mean? Why did my ancestors leave? Did they come here and do harm?"

Walls doesn't have the answers to all those questions, she admits. She's still evolving. But she feels more at peace about who she is.

There's still tension there, she said. But she's also discovered surprising parallels between her Anishinaabe and Swedish sides. Like how connected her Swedish ancestors were to the land and water and seasons, and how they lived communally, similar to her Ojibwe family.

Earlier this summer, Walls had a chance to return to Sweden, with her new husband, a Swedish man who she met while working on the TV show.

They met more of her extended family, who presented her with a traditional midsummer folk dress. Right away she was startled with how similar it felt to putting on pow wow regalia.

"Then something that gave me the shivers happened," she recalled. When they were dressing her, they told her to tuck her handkerchief behind a heart shape on the folk dress that covered her chest.

Tears came into her eyes. She was stunned, she remembers thinking. “They’re saying the exact same words that I'm learning in Minnesota from Anishinaabe people! These are deep teachings.”

Other Native people in northern Minnesota who have reconnected with their Scandinavian roots have discovered similar parallels. Finnish people revere the sauna, for example, while Ojibwe people have the sweat lodge.

They’re both spiritual, in different ways, said Arne Vainio, a well-known physician on the Fond du Lac reservation, who takes an hours-long sauna every Saturday morning.

"It is a time to reflect on life and life changes,” he said. “I always feel like I'm with my father when I'm in there. And with my grandfather." 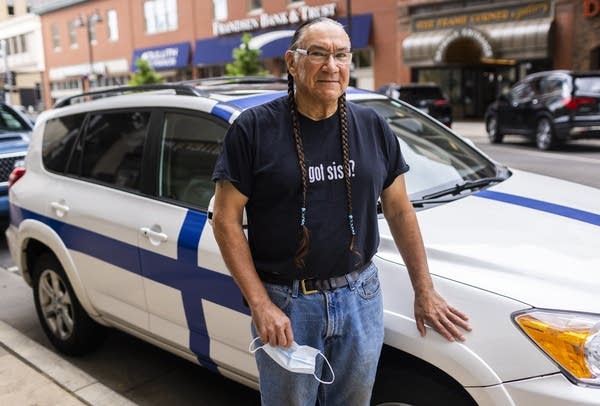 Arne Vainio grew up north of the Iron Range, the son of a Finnish father and an Ojibwe mother who owned a bar in the tiny town of Sturgeon.  Derek Montgomery for MPR News

Vainio, 63, grew up north of the Iron Range, the son of a Finnish father and an Ojibwe mother who owned a bar in the tiny town of Sturgeon.

Over the years, he said, he's saved the lives of several people who hated him for the color of his skin. Before going to medical school he worked as a paramedic on the Range, where he recalls responding to a man having a heart attack.

"And as soon as he got in the ambulance with me, he said ‘No F-ing Indian is going to touch me.’ And then I started an IV on him, and I talked with him, and by the time we got to the hospital, which was maybe half an hour, he wouldn't let go of my hand and he wanted me to come into the ER with him."

Vainio’s father committed suicide when he was only four. When his Finnish grandparents died, “there was no more Finnish anchor, and I became mostly Ojibwe,” he said. That sense deepened when he attended college at the University of Minnesota Duluth and connected with an Anishinaabe group.

The reawakening of Vainio’s Finnish side began in 2008 at a FinnFest celebration in Duluth, where he and others spoke about what it meant to be a "Finndian," or "Finnishinaabe."

There are about 1,200 Minnesotans who identify as both Native American and Finnish, according to census data analyzed by the APM Research Lab as part of its project Roots Beyond Race. 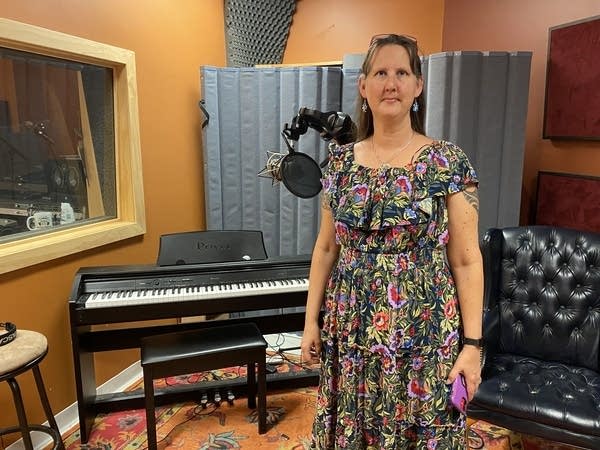 Both her dad’s Finnish family and her mom’s Ojibwe family played important roles in her childhood growing up on the Fond du Lac Reservation. Both families lived nearby; her dad’s family had homesteaded on the reservation.

Still, she said sometimes she felt like she wasn't accepted by white or Native people.

"There's some challenges in being a mixed person,” she said. "You know, feeling like an outsider, and feeling like, you know, an ‘other,’ wherever I was. And I know that that's not only true for myself. I've talked with other folks who have had similar experiences.”

Jaakola, 53, channeled some of those emotions into a song she wrote called “Red & White Blues,” which she included on an album titled “Finndian Summer.”

But as she got older, she began to see her background as a source of strength. She said it's taught her to look for commonalities among people, and also to celebrate differences.

"I think people who are aware of their multicultural background, it's almost natural to do that,” she said. “I think that that's, I don't want to say like a product of being a mixed person, but it is a strength."

She believes that perspective helped get her elected to the Cloquet City Council two years ago.

"They trusted that I was going to be thinking about, you know, not only one part of my family circle when I was being asked to make decisions. So that's pretty humbling.”

Jaakola said she's learned to embrace the totality of who she is, in a way that builds on the strengths of both cultures.

For Arne Vainio, it's what's inside of you that's important.

"And I have inside of me Ojibwe, and Finnish culture,” he said. “And I wouldn't have it any other way." 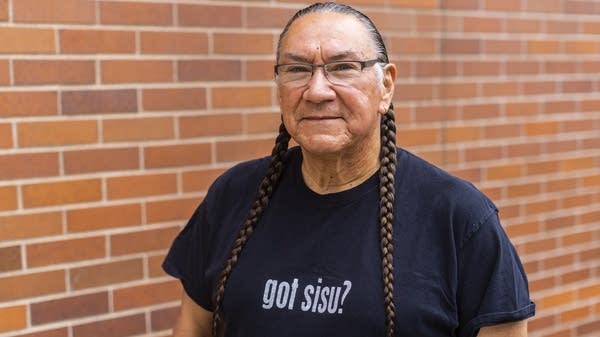 To read this original story and more news, follow this link to the MPR News website.
News, Arts+Culture