Photo: To Shannon and Ryan Gustafson of Fort William First Nation, an Ojibway First Nation in Ontario, living the good life means creating items including moccasins and tikinaagans that help them reconnect with their culture. (Jolene Banning/CBC)

For Ryan and Shannon Gustafson, creating is about culture and identity.

The couple work full time from Fort William, an Ojibway First Nation on the western shores of Lake Superior in Ontario.

As creators, they're living the good life, including through their business, RS Gustafson, which produces a range of cultural items — from beadwork, to moccasins, to tikinaagans (traditional baby carriers).

"It's about our people, and to be able to share."

Shannon credits the pair's early beadwork as the catalyst that led them to this full-time work.

"We started to learn about different tribes and the things that they wore, the types of regalia, the designs," she said. "The designs were something that was very prominent.

"For us, you know, being Anishinaabe, we always knew that we had this connection to the old floral designs and things like that, but we didn't see it enough around this area to be familiar with it," she said. "We started to really think about who are we representing when we go to these gatherings, and so it became about identity, like tribal identity."

Just over five years ago, the Gustafsons' first-born son was killed in a vehicle collision, a loss that has also influenced their work. The couple, who are from Whitesand First Nation northeast of Thunder Bay, also have two daughters. 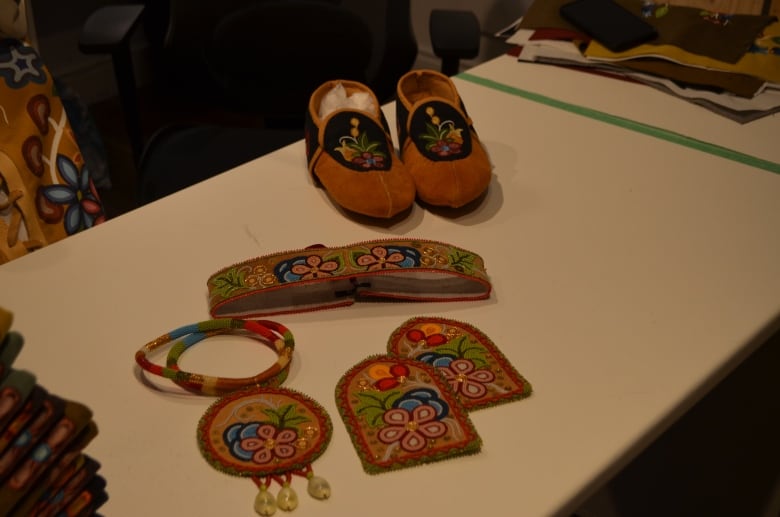 Some of the items created by the Gustafsons, who run a company called RS Gustafson. (Jolene Banning/CBC)

"Losing our son and having to reconnect with ceremony, we start to place value on things that are needed for ceremony, like bundle bags," Shannon said. "I really enjoy trying to be innovative, but still making things look like really nice and sort of traditional.

"We're not so focused on doing beadwork for powwow and stuff like that anymore. We just do whatever we feel like doing. And that's the cool thing about it."

The pair also shared advice for others hoping to live a good life themselves.

"You have to believe within yourself before you even try to open up somebody else's eyes," Ryan said.

Shannon said listening, too, is important, as is doing what feels right.

"If it doesn't feel right, don't put yourself there. Just always be respectful, and learn to listen before you talk."

You can find all of our coverage here.